First of all, kudos to our friends at the One People's Project.

Back in November 2009, Tyler Sturrup and his girlfriend Carolyne Kwiatek were the targets of an IED attack. Sturrup was a member of WEB and Carolyne had formerly been in some sort of relationship with John Marleau (for the sake of your stomach, try not to picture that) so it was suspected that Marleau and other Aryan Guard members might have been involved. Marleau was arrested, but released when it was determined there wasn't enough evidence to hold him. However, after searching his residence where bomb making materials were found, a warrant for Kyle McKee's arrest was issued. McKee and a 17 year-old co-accused took off running, almost being caught in Saskatchewan. Both were eventually captured in Manitoba, first the 17 year-old, then McKee himself. McKee was transported back to Calgary to face charges. Unfortunately the Crown prosecutor decided that there wasn't enough evidence to link McKee to the crime of attempted murder, so an agreement was reached whereby McKee would plead to lesser charges.

Not long after the IED attack and during the trial, McKee's friends in the Movement rallied around him and proclaimed his innocence. When attempted murder charges were dropped. Paul Fromm celebrated the release of, "political leader" Kyle McKee. Former Aryan Guard member Bill Noble chimed in:

This shouldn't have been unexpected, however it turns out not to actually be the truth. Noble wasn't only uncertain of McKee's innocence, he actually appears to have been certain of his guilt.

In a story published on the OPP website, on a screen shot from an area of the Blood & Honour forums that we don't seem to have access to, Noble conspires to get the charges against dropped indicates the length to which boneheads have tried to cover up for the criminal behaviors of their members, as well as to indicate that the relationship between Sturrup and Kwiatek might not have been the prime motivation behind the attack:

In November 2009, a pipebomb was left outside of an apartment occupied by Tyler Sturrup and his girlfriend Carolyne in Calgary Canada. Sturrup was a member of a neo-Nazi group calling itself W.E.B. (Western European Brotherhood) which had broken off of the Aryan Guard. The relationship between the remaining members of the Aryan Guard and W.E.B. had been growing increasinly acrimonious for several months, but things appear to have come to a head when Carolyne, who had previously been involved in a relationship with a member of the Aryan Guard, started dating Sturrup. It was suspected at the time that the pipebomb was a response to this new relationship.

Kyle McKee and a 17 year old youth were both implicated in the crime. The youth was later released for lack of evidence but McKee was put on trial after his capture. Members of the McKee, the remaining members of the Aryan Guard and Paul Fromm all loudly proclaimed his innocence. The Crown (the Canadian version of an Assistant DA) dropped the attempted murder charges because he didn't have enough evidence to support the charges, though McKee did plead guilty to lesser charges including possessing bomb making materials.

However we have received evidence that not only implicates McKee in the crime, but also indicates that at least one Aryan Guard member knew about it.

About 6 months ago a group of antifa were able to hack into a number of neo-Nazi websites and some personal email accounts. That information was uploaded to a number of websites and was free to be downloaded. One of the email accounts was that of Bill Noble. While we didn't download any of the information ourselves, we were sent excerpts, such as Noble's futile request for political assylum in Iran. But it appears that someone who did download the information went an extra step and used information that was found to log into some of Noble's online accounts. One of those accounts, Blood and Honour, was sent to us today and provides some details of the efforts to convince McKee's accusors to withdraw the charges against him. It also indicates that the pipebomb was not in resoponse to a domestic dispute, but because of W.E.B. claims to be purchasing weapons to be used against Aryan Guard members. 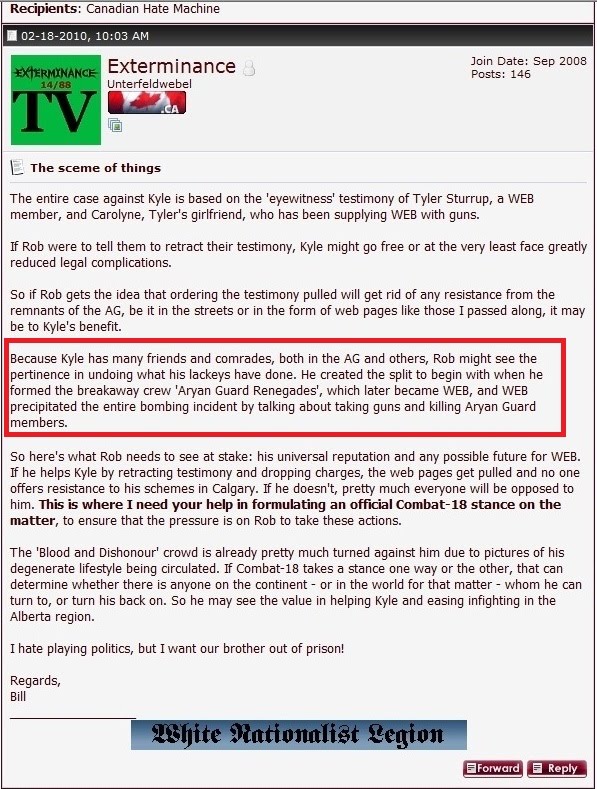 We don't know about you, but we think this is a rather interesting turn of events. It also begs the question as to who else knew. Paulie, for instance, appeared to have known more to the story when he posted this to his Facebook account: 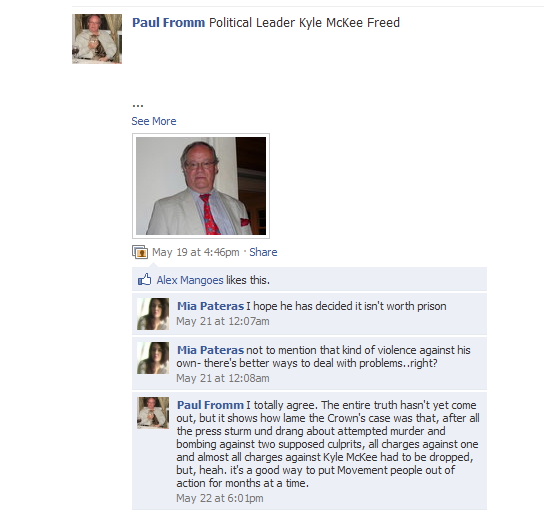 We aren't suggesting that Paulie knew everything. It does seem that he may have known something.

Right now McKee is back in jail, however his ATB friends still seem hell-bent on marching in two weeks.

We wonder how this particular revelation will impact those plans?
Posted by Nosferatu200 at 15:09

1. Noble doesn't actually explicitly say Kyle is guilty here, indeed he uses "eyewitness" in scare quotes to suggest that Sturrup might be lying, but he does say the "bombing incident" was provoked (gotta love the use of the passive voice here). Either way, Noble clearly has no shame about putting pressure on a witness in a criminal trial (which I'm pretty sure is more than a little bit illegal). I'm just saying this isn't quite the smoking gun that OPP is acting like it is.

2. This should really be forwarded to the crown prosecutor in McKee's current trial. It probably isn't admissible as evidence but more info might help them build a case.

i'm pretty sure everyone "knew" it was kyle. But how many of them actually witnessed it? tnight before the bombing, there was a house party at kyle's that went to the wee hours of the morning. About six hours after the story hit the news damn near all the kids at the party called the cops to say kyle had done it. none of their testemonies were admissable though because they didn't witness the attack or anything.

Kyle's best option at this moment would be, to cut a sweet heart deal with the RCMP/CSIS in favour of retrieving personal information about who exactly runs ARC, and pass such information onto certain people.

After all, does CSIS really care about some loser Skinhead and his Communist foes? Don't for a second put it past CSIS/RCMP.

We didn't "hack" anything. The information was posted to another website and we republished it here. With that said, we don't know if we should assume that this is all there is. Perhaps there are more gems to be released?

And we got to tell ya, we've a feeling that CSIS have bigger fish to fry than the members of ARC. None of us have ever broken the law (we can count the number of traffic tickets we've collectively amassed on one hand). And besides, perhaps CSIS knows exactly who we are already. And perhaps they are pleased with our work?