Paulie Comments on Calgary March Which He Characterizes as, "Very Successful"

We're about to bring our exclusive coverage of the events of March 19 to a close soon, but we certainly can't conclude the discussion without some input from the grand old man of the bonehead movement, Paulie Fromm. 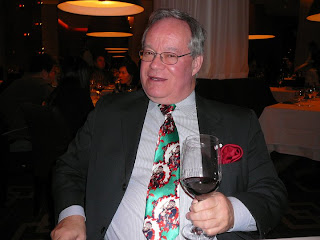 This past Tuesday, Paulie (pictured here drinking more red wine paid for by his poor followers) spent the first part of his new radio show commenting on the "White Pride" march that took place last Saturday. Now normally we don't like to link to bonehead websites, but we decided to link to this one because it is really, really funny.

Let's just say that while Paulie might have a face for radio, he really doesn't have a voice (click on the link to see what we mean; it really does become quite painful after a while).

There were a few things we found interesting about the program. For starters, although the members of Blood & Honour claim that they are not the re-named Aryan Guard, Paulie admits at 7:43 that Blood & Honour in Calgary is, in fact, the Aryan Guard. Not that anyone with any common sense who reads this blog had any doubt of this, but we thought we would include this confirmation by one of the bright lights of the Canadian bonehead movement.

In the section where he speaks of the Calgary march, he complains about police harassment (1:42 and 9:53) and congratulates Natalie S. ("Sonne") for organizing the "successful" march while the leader of Blood & Honour, was temporarily in prison (1:42 and 1:53). We note that reference to McKee being in jail is quickly glossed over with no mention of the reason McKee is in jail; we're sure that he wouldn't have a problem with the threats made to Jason Devine, but he might have a hard time explaining away the beating of an small, 18 year-old high school girl.

We did note a significant mistake in Paulie's presentation (we mean beyond the obvious ones). Paulie ironically argued for consistency in making this march an annual event, noting that this was the fourth consecutive year that a march has been successfully held (1:27 and 2:02). Not including our disagreement that this year could be considered successful at all, Paulie either has forgotten that the 2010 march was called off because of the imprisonment of McKee who was facing attempted murder charges at the time and the general fallout related to those charges. Or he is simply lying. We'll leave our readers to determine which is the case.

Paulie mentions the, "smear job" done by journalist Josh Wingrove in his piece on Kyle McKee and the neo-Nazi movement in Calgary (5:50 and 6:02). It isn't the discussion of the violence the boneheads in Calgary, especially Kyle McKee, engage in that concerns Paulie. It is the fact that Wingrove refers to McKee and co. as neo-Nazis. To Paulie, the term, "neo-Nazi" is a smear perpetrated by the, "minority owned or minority influenced" msm (read: Jew controlled) in order to denigrate, "White Nationalists" (6:26, 7:31, 7:57, 8:45). He wonders why their enemies refer to them as neo-Nazis -- he says he knows McKee, Natalie S., and other, "leading lights" of the Calgary movement and they never call themselves neo-Nazis -- when they could just call them Nazis. (6:37 and 8:08)

Paulie couldn't pass up the opportunity to comment on ARA organizer Jason Devine's political efforts and the low number of votes he has received in elections he has participated in, ignoring entirely his own history of electoral impudence (in 2008, Devine has a higher percentage of people who voted for him than Paulie in in the 2010 mayoral election). People who live in glass houses, Paulie.

Paulie only spent about 11 minutes discussing the march. To be honest, as Paulie spent most of the program sounding like a stuttering TB patient, we couldn't listen for too much longer. We did catch him complaining about the grocery chain Loblaws donating baked items to a BC based Sikh temple. Paulie asks what we're sure are rhetorical questions: “Will Loblaws be making a similar donation to a Christian… hostel for homeless men or Christian foodbank or a Christian church that helps the poor?”(13:18) The answer Paulie wants his listeners to come away with is that no, Loblaws would never donate anything to Christian groups and in fact are involved actively in the mythical, "war on Christmas." Paulie is banking on his listeners being ignorant and lazy, which most of them are, and that they won't spend the 3 seconds it took us to find numerous examples of Loblaws donating to Christian groups, such as this one here:


“The Salvation Army is grateful to the generous support from our partners, Tim Horton’s, Wal-Mart and McDonald’s – Elmvale and Loblaws Superstore.” said Jeff Robertson, Spokesperson for The Salvation Army.

The last segment of Paulie's program we had the stomach for was his coverage of a brutal case of abuse and misogyny (18:00). The story is of a young woman in Pakistan who, on refusing to marry her cousin, had her leg cut off by the man. Aside from making light of the crime, Paulie uses the incident to discuss the resultant, "low IQ" of Muslims due to such marriages being common in the Middle East. Paulie uses the regular pseudo-science that he and his ilk turn to, however one of his own followers disagrees with him:

Hey, not everyone is as lucky as Paul Fromm is in finding love. In fact, we have a picture of someone who we think might be Paulie's latest love interests based on that, "come hither" look lie has become infamous for: 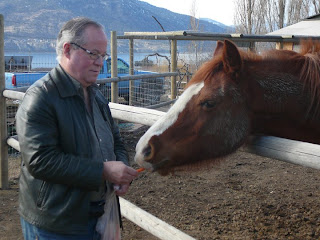 To be sure, this one would be a step up when compared to Paulie's previous relationships

LOL, Gaede would be the first to defend inbreeding... I hope her daughters are now far, far away from that disgusting woman, for their sake.

I noticed they ALWAYS refer to Muslims (usual, common spelling) as Moslems (just an error, or an alternative??)

It seems like it might be some form of silly retaliation to being called "white" rather than "aryan", anyone notice how they always label "white" a spelling error with [sic]??

What gives boneheads? Why the [sic] and "moslem"? I know there is someone reading this that can answer.

By the way, its not that spelling it different seems like something novel and unique, i think you're all retarded so dont go thinkin youre all cool for that...

I'm not sure whether Paul's fingers are too fat to be able to press individual keys on the keyboard, or if he's just had too much red wine to be able to type properly. Quite possibly both..it must be hard to live with yourself if you're that much of a failure.

Anyway, thanks for summarizing the radio show for those of us that really didn't want to listen to it ourselves.

Shit between all the coughing and gagging Fromm is doing i couldn't stand to listen to it anymore.
LOL..Almost sounds like it could be an SNL skit.Reasons Fromm was a no show at the March was because as usual unless his flight and ALL expenses are paid he doesn't show. This man is breathing my air and i'm tired of it.

muslim and moslem are interchangeable. moslem has fallen out of use in this century though. if you look at any british publications from the imperial period etc, it is always moslem. or mohammadian (though this has been out of use for like 300 years).

Maybe the horse had something to do with all his gagging?