We had heard rumblings of a rally organized by boneheads aligned to Combat 18 which was to take place today in London, Ontario. There were claims that upwards of 50 members of the violent bonehead gang would show up, a number that was repeated yesterday in the "London Free Press":

Police and city officials are bracing for a protest Saturday by a “violent, neo-Nazi” group outside city hall.
The Free Press has learned upwards of 50 members of the so-called Combat 18 will gather at 1 p.m. Saturday, but it’s unclear of its focus.
One city councillor said he’s “appalled” at the plan.

“It’s time we have stronger hate laws in this country,” said Ward 4 Coun. Steve Orser.
“It’s very disrespectful, especially to hold this so close to the cenotaph that honours our war dead, not to mention our veterans and prisoners of war. Hatred is the gateway to hell and we shouldn’t have to tolerate this type of activity in Canada.”
Mayor Joe Fontana couldn’t be reached for comment.
A police official confirmed authorities are aware of the protest, but didn’t know details.
No trouble is expected, said Det. Superintendent Bill Merrylees.
“These people have met here in the past,” he said. “We don’t expect any major issues. Where problems arise is if their opponents (anti-hate supporters) show up, but we don’t really expect that. We’ll have an appropriate response if there’s trouble.”
So how many of them showed up? 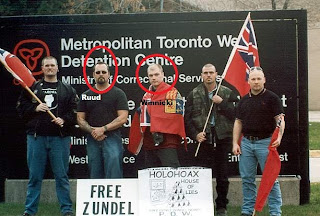 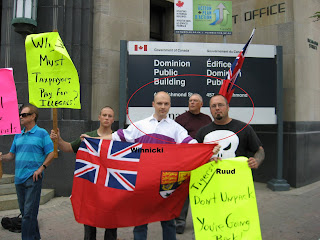 What was billed as a neo-Nazi rally outside London’s city hall instead turned into a bizarre shouting match between anarchists and two men who said they were there to protest fluoride in tap water.
The two fluoride protesters were known local white-supremacist Tomasz Winnicki and Dave Ruud, who heads the Northern Alliance, a far-right neo-Nazi group based in London.
Both held signs telling people to go to websites that promote taking fluoride out of city drinking water.
The two were far outnumbered by about 20 counter-protesters who showed up wearing black bandanas over their faces and shouting at the two men to go home.
“Are you a Nazi? Are you a Nazi?” yelled one man at Ruud, who backed away and said he was there to protest fluoride.
The rally was billed as a gathering of Combat 18 members. C18 is a violent neo-Nazi organization that began in England.
City hall security alerted councilors and other staffers of the planned rally on Thursday.
The Free Press reported about the C18 protest on Saturday.
“I’m here to protest fluoride,” Winnicki said, adding he’d heard of Combat 18 but didn’t know any members.
“The city website should have a voting system where we can vote on any issue that comes up and then we can vote ‘Do we want fluoridation?’” Winnicki said.
Winnicki said he'd heard about the neo-Nazi rally through the media and decided to show up to gain more publicity for his anti-fluoride movement.
Winnicki and Ruud held signs directing people to fluoridealert.org and waterloowatch.com, two anti-fluoridation websites.
The issue formed one of the planks of Winnicki’s unsuccessful bid for mayor in the October municipal election included getting rid of fluoride in the city’s tap water as one of its planks.
It's more recently come up at city hall after a group that helped lobby Calgary and Waterloo to take the substance out of its water supplies started lobbying in London.
The counter-protesters often got into the faces of the two white supremacists, yelling at them to leave.
“Word spread quickly about this and we tend to oppose fascists whenever we can,” said Anthony Verberckmoes, one of the counter-protesters. He’s part of an anarchist group called Common Cause.
“They pulled a crafty deflection. And there’s just two of them, which is great. White supremacist and fascism unfortunately has a history in London and in the broader world scene, in Europe and the United States, it’s on the rise.
“We don’t want to see London become a part of that rise.”
Another Londoner, Kara Jarvis, said she was compelled to come out to tell the white supremacists that “hate crime is wrong.”
“Everyone should not be complacent. We are a diverse city and these people are not tolerant and they are not welcome here. We have to let them know that,” she said.
Two uniformed police officers supervised the ongoing shouting match between the anarchist counter-protesters and the two men who said they were there to fight fluoridation. After about 15 minutes, Winnicki and Ruud left.
kate.dubinski@sunmedia.ca
Posted by Nosferatu200 at 16:35

A police official confirmed authorities are aware of the protest, but didn’t know details.

“These people have met here in the past,” he said. “We don’t expect any major issues. Where problems arise is if their opponents (anti-hate supporters) show up, but we don’t really expect that. We’ll have an appropriate response if there’s trouble.”

Seriously?? Did anyone else catch the attempt by police to blame "violence" on the anti-racists...as though these bonehead douchebags were just going to have tea on the steps of City Hall?

Between this and the recent comments by an Edmonton cop, police sure don't seem all that bothered by fascist thugs that set up shop in the communities they are supposed to "serve and protect."

Between this and the recent comments by an Edmonton cop, police sure don't seem all that bothered by fascist thugs that set up shop in the communities they are supposed to "serve and protect."

A lot of police officers agree with some of the far right thoughts. Why should they really care, they're just looking for a paycheque and kickbacks, like everyone else. I know of a few police officers who have stated that when they have to deal with known "ARA members", they wished they weren't cops.

Again, can you be really surprised that police don't really care? Alberta was accepting police officers from the UK, most of which are White, who have witnessed their Country going to crock, so they could identify with far-right politics.

Here's a post from here in London -- with photos -- about what went down that afternoon -
http://www.mediacoop.ca/photo/quickly-mobilizing-against-neo-nazis-london-ontario/6628a