We will post what was written by Jason concerning the incident:

Just after 5am our house was attacked, again. It looks like a brick, or a part of a brick, was thrown at our front window. The person who did it opened the gate, walked across the lawn, and threw the projectile.

In light of the different previous attacks we have faced and the fact that Kyle McKee is free and organizing again, we strongly believe that this was the work of Blood & Honour (B&H).

Could this be the action of a new member being initiated into B&H? We don't know and it doesn't matter. What matters is the fact that as long as these neo-Nazis are free the attacks, as in the past, will continue and we will not be truly safe.

The following photographs were taken of the damage. Jason states that he heard one loud bang followed by a second along with the sound of shattering glass seconds later. The brick that was thrown broke the first window pane but did not go through the second. Jason believes that this all occurred between 5:10 am and 5:15 am. 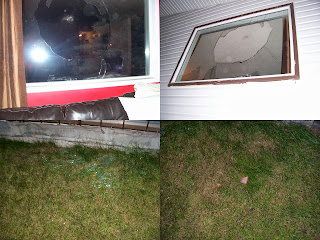 Later, it was discovered that three of the four tires of the Devine's vehicle had been slashed: 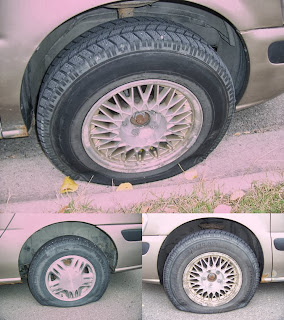 There have been some rumors that McKee has been reorganizing Blood & Honour. Given the other attacks that have occurred to the Devine family, first at their condo and then their home, it seems far too coincidental that this would be a random attack given the level of malice that appears to be involved.

If anyone has any information, please contact the us and the police.
Posted by Kurt Phillips at 14:31 No comments:

Old Haunts of the Heritage Front

We're currently waiting for some information regarding a couple of upcoming articles, but we thought that we would revisit our project concerning documenting the history of the Canadian racist movement. The primary focus of our research has been on the years 1989 to 1994 under the leadership of Wolfgang Droege which coincided with the rise and decline of the Heritage Front, though there was a brief mini-resurgence in 2001 under the watch of Marc Lemire.

Two weeks ago a couple of ARC members began documenting some of key locations in the early history of the Heritage Front in Toronto. There are rumors that some of the locations, such as the, "Zündel Haus" may be torn down to make way for condos so we decided to record them while they still exist.

"Odin TheCelt": Another Name Change and Change of Tactics

It appears that our would-be nemesis "Odin TheCelt", aka "Itsoktobe White", aka "Yordi Jewkiller" has decided upon a new name for himself:

One of our readers, who makes it clear that he is not on board with us ideologically, left the following comment under a recent article commenting on the SOS:

I have to say i dont agree with anything ARC says, and think most of your info is one sided or made up and often silly. But fuck you are witty with your comments making some of these guys look retarded. Always a fun read.

Well shucks, y'all gone and made us blush!

The purpose of the article in question was to point out that the membership of the London-based SOS were.... how could we put this in as classy a way as we can?

Well, since the backhanded compliment noted our wit, perhaps the Bard himself could help us to describe the membership of the SOS?

Thou villainous abominable misleader of youth

[Thine] brain is as dry as the remainder biscuit after a voyage.

Thou art essentially a natural coward without instinct.

Would the fountain of your mind were clear again, that I might water an ass at it.

Or, if we were to put all this in slightly less pompous language, they're all about as useful as a sack of broken hammers.

Be that as it may, our article and the above comment that was left did serve to illicit a reaction from SOS founder Max Hynes, or at least someone posing as Max Hynes:

Aside from the unoriginal disparagement of our personal lives, we do note with interest the final line about intellectual property. It would appear that this is perhaps the SOS's novel way of trying to go after us now.

Back to "Odin TheCelt" now.

It looks like he didn't much care for our most recent posts about him which was in reference to his threats towards the writers of this blog. Now, instead of threatening to beat up women in dark alleys, he's going to take us down for using his pictures:

A Personal Look Inside W.E.B.

A few weeks back a series of messages were left on the blog detailing one individual's experience with the Calgary-based hate group WEB. Our readers are very well acquainted with WEB and the actions of their members, the most violent action of which was the murder of Mark Mariani, a crime that WEB member Tyler Sturrup pleaded guilty to and WEB founder Robert Reitmeier is still currently awaiting trial.

Though we didn't pass them through moderation when they were posted, we were able to contact the person who left these comments and asked if we could publish them as an article. Though understandably a little reticent at first, the individual felt that perhaps her story could help others who might be vulnerable to the lure of hate groups.

The following is one person's experience. We have attempted to conceal some identities but are under no illusion that those who are more personally acquainted with the characters in this account won't be able to easily figure out whom is being referred to. The story was compelling but raw; we worked with the writer to tell the story with as little distraction as possible while attempting to accurately detail her truth as she understands it.

And with that, we give you an account of one person's personal encounter with the Western European Bloodlines, Calgary hate group.

NOTE: Before the article, we would ask the woman who provided us the story about WEB members if she could email us. You will find our email address on the left side of the website.

We posted a few stories (here and here) about the Fatima Centre a little while back and their planned conference later this month. There has been another update:

Also, neo-fascist Roberto Fiore (who has ties to terrorism in the same way that the Pope is slightly Catholic) seems to be off the speaking list as well now.

Really people. Google is pretty easy to figure out.

Posted by Kurt Phillips at 09:20 No comments:

Of COURSE Paulie is Getting Himself Involved in the McCorkill Case

Really, was there ever any question?


And why might the Southern Poverty Law Center be concerned about the National Alliance getting a hold of a potentially substantial wad of cash?

Before we get the the reason for this post, we have to thank Paul Fromm. You see Paulie has been very generous regarding some of the gifts he's been giving us lately. For example, there's this little gem from a week or two back:


Hitler as Jesus. Seems a little blasphemous for someone who claims a devout Christian and which I'm sure would be offensive to a lot of people for a whole lot of reasons. But maybe we aren't being fair? Some of the words have been cut off. Perhaps there's a reasonable explanation?


Uhm, nope. But it does hit all the bonehead themes. Accusing the Jews of deicide, deification of Hilter, and denying the Holocaust while at the same time accusing Jews of being liars, all wrapped up in the abysmal spelling, punctuation and grammar we've come to know and love.

"Yordi" here is a member of Max Hynes bonehead gang, Southern Ontario Skins (SOS). "Yordi" who is pictured below has gone by a few names on Facebook, including "Odin TheCelt" and most recently (before his most recent name change) "Itsoktobe White":