We would additionally note that Warren Kinsella and a number of other heavy hitters are supporting the endeavor:

That’s the message to Canada Post and the Government of Canada: stop helping to distribute a racist, homophobic, misogynistic, Islamaphobic and anti-Semitic tabloid to the homes of thousands of Toronto residents.

The broad coalition of citizens and anti-racism activists – which doesn’t have a name yet – welcomed the action of Ottawa human rights lawyer Richard Warman, who today formally filed a complaint that Canada Post and the federal government have violated multiple sections of the Canadian Human Rights Act. Warman’s complaint can be viewed here.

“Richard Warman is one of the most successful human rights litigants in Canadian history,” said Bernie Farber, Executive Director of the Mosaic Institute. “He has won a dozen human rights cases he brought against various neo-Nazis, white supremacists and hate groups. We are very confident that Richard will be successful when this complaint is heard.”

For months, the coalition of citizens and activists have been trying to lobby Canada Post and Judy Foote, the minister responsible, to stop distributing a tabloid called Your Ward News. Reportedly distributed to nearly 80,000 homes in Toronto, Your Ward News regularly promotes Holocaust denial, anti-gay and anti-women hate, and flagrant racism. Canada Post has refused to act, however, and the Crown corporation has continued to take undisclosed sums to distribute the hateful rag to people who don’t want it.

The postal corporation has threatened to discipline or dismiss Canada Post workers who object to delivering the extremist tabloid. CUPW earlier this month filed a Regular Grievance with their employer over being forced to deliver “an anti-worker, anti-people, racist, sexist and homophobic publication.”

Your Ward News is edited by James Sears, who has in the past pleaded guilty to sexual assault, and lost his licence to practice medicine for sexually assaulting patients. Sears is an unabashed Hitler enthusiast, and has called the gas chambers at Auschwitz a “lie.” Other contributors to Your Ward News include Gary Schipper, a former leader of the neo-Nazi Heritage Front, who served time in jail for refusing to take down the Front’s telephone hate messages.

“It is outrageous that Canada Post and those responsible in government have turned a blind eye to the hatred that is found on every page of Your Ward News,” said Warren Kinsella, a lawyer and resident of the Beach who wrote the book Web of Hate. “We have tried repeatedly to get them to act, but they have refused. We are hopeful that Richard’s formal human rights complaint will help change that.”

The coalition is made up of a diverse group:

So far the story has been picked up by a number of msn publications:
Still, Sears does have his supporters. Of course, his supporters are a repulsive as he is but.... actually, I'm not sure quite where I was going with that train of thought. In any case, here's Paulie: 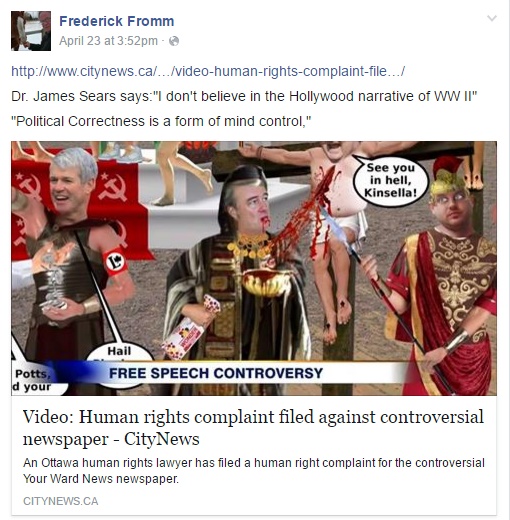 Also owner of "Your Ward News" LeRoy St. Germaine has been making overtures to other hate groups

Oh, we are going to have SO much fun with our next article on the Soldiers of Odin.

Really, we almost don't have to write any more. But we will.

That Banerjee hates Sikhs as much as he does Muslims isn't new to our readers. What is new is that he is now sending out press releases justifying physical attacks against Sikhs in Canada. 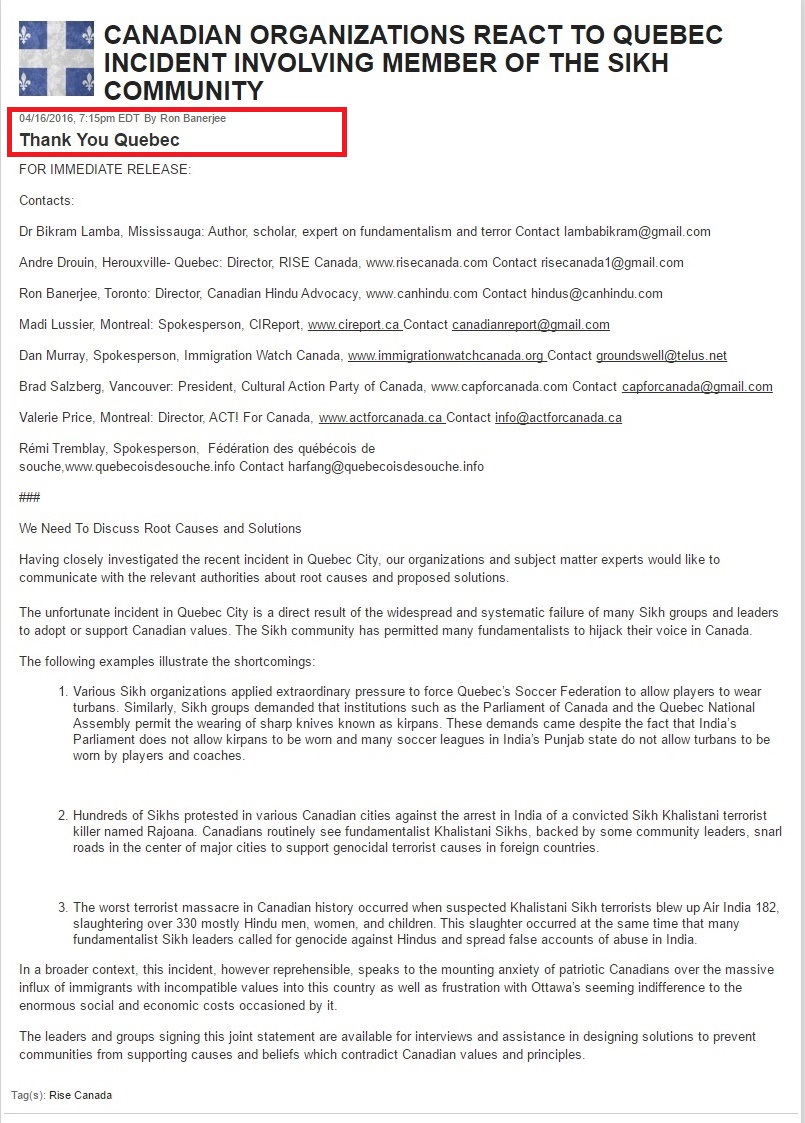 Banerjee is suggesting the attack on a Sikh man in Quebec was a direct result of Sikh terrorism (though his first point equating requests for reasonable accommodation with terrorism might be a bit of a stretch) and that the men who engaged in the attack should be praised: 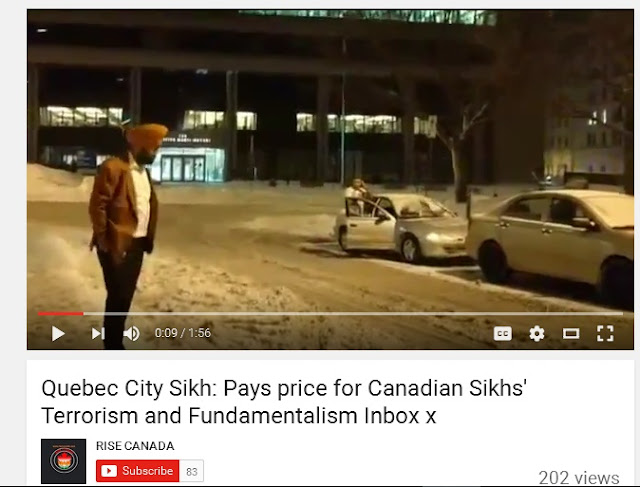 Note how brave these men really are:


Yep, drunkenly berating someone with racial taunting, then ganging up three on one to assault him, sure struck a blow against terrorism.

But then this isn't the only problematic video for Banerjee.

A little over a month ago, Banerjee decided that he was going to engage in a little bit of street preaching:


This video was taken by a person who posted it on reddit. Evidently one woman, not appreciating being told to cover up and dress modestly by a bunch of misogynistic assholes. took matters into the own hands and flashed them. The first street preacher was apparently so upset by being subjected to secondary sexual characteristics that he left the scene.

Banerjee? Well, we're sure he was torn. On the one hand he hates women. On the other, he's a sexually repressed pervert.

So what's a sexually repressed, misogynistic, pervert to do in this situation?

Creepy perv for the win apparently: 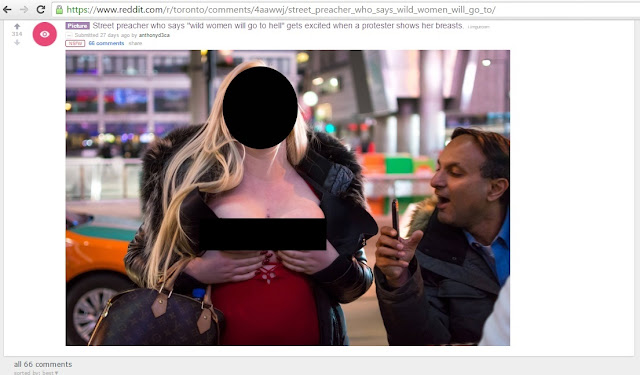 Oh yeah. We probably have mentioned it already, but Banerjee also loves him some Trump.

Finally, in news that will surprise no one, we've learned why Hitler-loving Buddhist and Fromm supporter ($$$) has been quite for a while. [NOTE: Thanks for catching the spelling error] 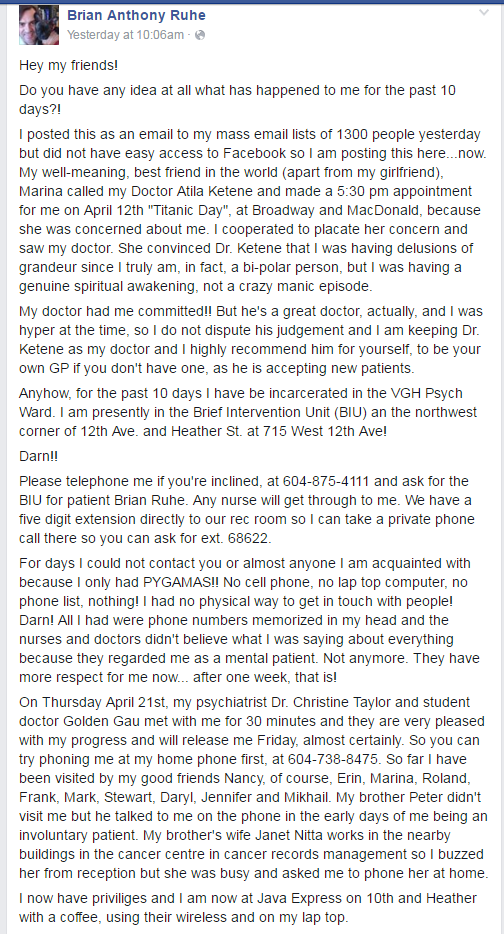 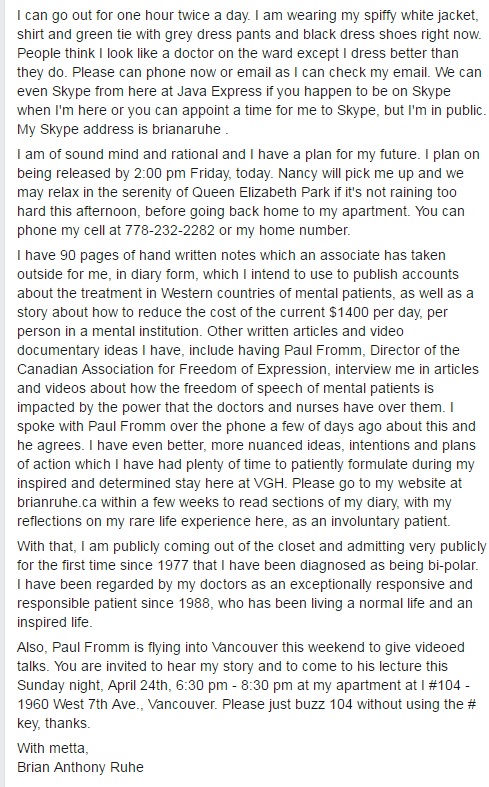 Look, we genuinely feel badly for anyone suffering from bipolar disorder. But we would hope that Mr. Ruhe would perhaps take some time to consider that believing Hitler as a spiritual guru might lead a few to reasonably consider that you've taken leave of your senses.
Posted by Kurt Phillips at 19:02 1 comment:

We learned that John "Dr. Dawg" Baglow was seriously injured today after a knife attack at his residence. He and two others are apparently at the hospital in serious condition.

The ARC Collective wishes John and the other two victims well during this difficult time. We hope you all make a full recovery. We also hope that John's stepson gets the help he seriously needs.

UPDATE: John has been able to comment on the incident. Says that all three who were attacked survived the incident. He needs rest but seems to be doing much better.
Posted by Kurt Phillips at 19:30

Read more »
Posted by Kurt Phillips at 22:43 No comments:

We last wrote about James Sears a little over a month ago. At that time we noted that Richard Warman had taken an interested in Sears and that those individuals whom Mr. Warman takes an interest in often come to really regret that fact.

Today, as a reminder that Sears has been a creepy dude for more at least a quarter century, we present our readers with an article currently being passed around by some friends (click here to see the larger, readable, version): 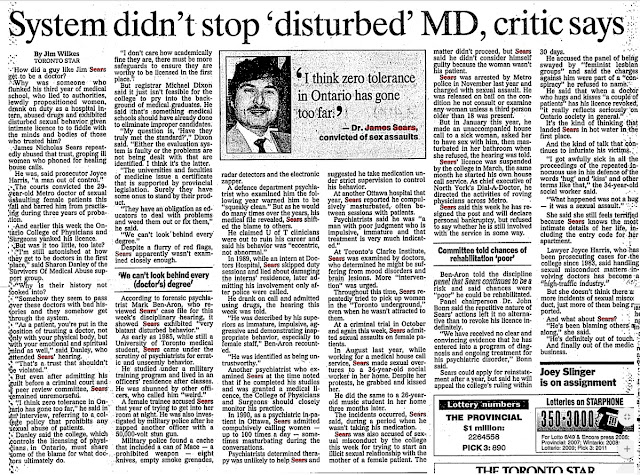 What is fascinating is that Sears hasn't seemed to have changed a bit. Misogynistic as ever and continuing to blame others for his personal failings.

At least he got rid of the mustache.

Posted by Kurt Phillips at 19:57 No comments:

So, uhm.... the lead writer (and lately only writer) on the blog went on vacation and forgot to tell anyone. And when I write, "went" I mean still on vacation basting my liver in fruity cocktails.

Anything happen while I've been gone?

I'll be back on Thursday and, assuming the jet lag hasn't totally kicked my ass, will be ready to start back on the blog by the weekend. In the meantime, I intend to continue sitting on the beach drinking mojitos and pickling my liver.

But because it is hilarious, I leave this reminder to our readers concerning the intellectual level of our opponents:

Fair point. "Anglo Canadian Pride" is decidedly not a geneticist.