Today was an historic occasion as Prime Minister Trudeau formally apologized in the House to Canadian Sikhs for the Komagata Maru "incident." Former Prime Minister Harper had apologized in 2008, however that apology occurred during an event in Surrey, BC, which was a disappointment to the Sikh community who wanted the apology made on the floor of the House of Commons. We should also note that Trudeau's apology on behalf of the Canadian government was supported by the Conservative Party, NDP, Bloc Quebecois, and Green Party.

Someone who wasn't pleased with the apology? 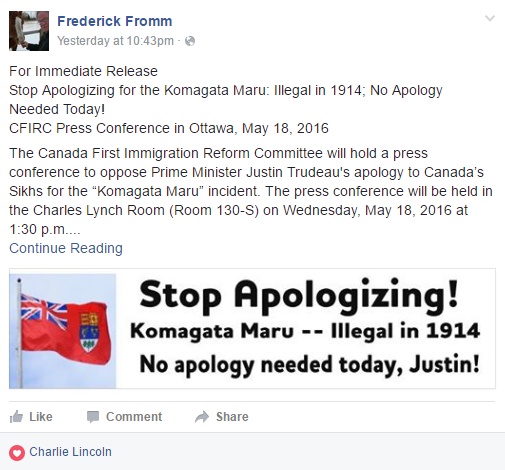 Of course it was Paulie!

Now Paulie wrote up a long-winded missive that we aren't about to publish in full that he intended to deliver in a speech at the press gallery at Parliament Hill.

We put emphasis on, "intended":

Controversial speaker denied access to Parliament for a second time

Just over an hour before Prime Minister Justin Trudeau was to rise in the House of Commons Wednesday and deliver an apology to Canada’s Sikh population for the 1914 Komagata Maru incident, Paul Fromm — anti-immigration activist previously banned from entering Parliament — was scheduled to hold a press conference opposing it.

Though his press conference was ultimately cancelled and Fromm was denied access to the Parliamentary precinct late Wednesday morning, that only came after some eleventh hour scrambling.
....
Fromm was previously connected to Holocaust denier Ernst Zundel and has been criticized by human rights groups for his racist views.
....
The office of the speaker of the house of commons confirmed to iPolitics that, “further to a recommendation from the Deputy Sergeant at Arms, and based on past practice”, Fromm had been denied access to the precinct.

That past practice referred to a motion brought by Conservative MP Jason Kenney in 2007, which ordered Paul Fromm and an individual named Alexan Kulbashian “be denied admittance to the precincts of the House of Commons during the present session to preserve the dignity and integrity of the House.”

In response to Jason Kenney's motion in 2007, Fromm later ran against him in Calgary in 2011 under the umbrella of a western separatist party, which was somewhat curious given Fromm's life-long residence in Ontario. And for his efforts, Fromm was stomped into a mud hole; had he run in an adjacent riding, he also would have lost to Communist Party candidate (and friend of the blog despite this writer's firm champagne socialism) Jason Devine. The subsequent spin on his shellacking was something to behold.

We wonder who Paulie will decide to humiliate himself against this time? We mean, besides this humiliation.

UPDATE 1: We so enjoy reading Paulie speak to himself in the third person.

And Winnicki claims the "White Race" is uniquely gifted and creative.
Posted by Nosferatu200 at 23:18 2 comments:

Soldiers of Odin: 81 Problems and a Snitch Ain't One of Them

There are times when this writer is not only able to expose bigot to public scrutiny, but also indulge in a bit of historical geekery. Those are good days.

And this is one of those days.

When examining the Soldiers of Odin it is easy to focus exclusively on the rampant racism found amongst a number of individuals who are drawn to the group as well as the Islamophobia which is the Soldiers of Odin calling card. But it can be easy to miss the incredible hypocrisy of an organization ostensibly founded to protect "our" (read: white) women and children from the swarthy hordes at the gate: 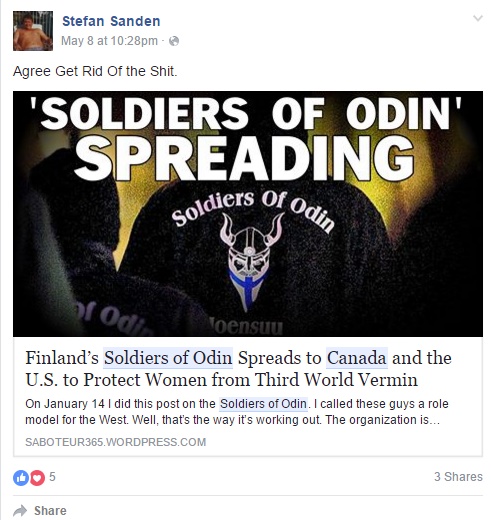 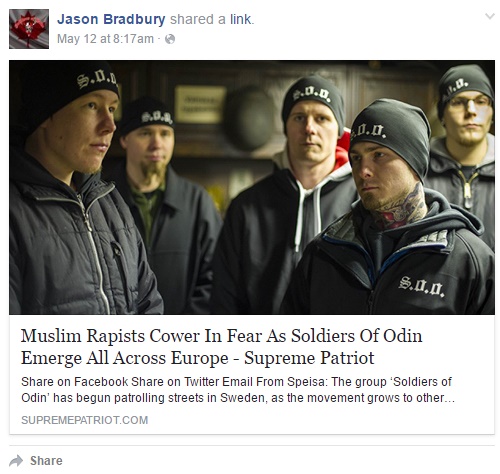 Then again, the misogynistic rhetoric of some members and supporters of the Soldiers of Odin sort of calls into question this claim: 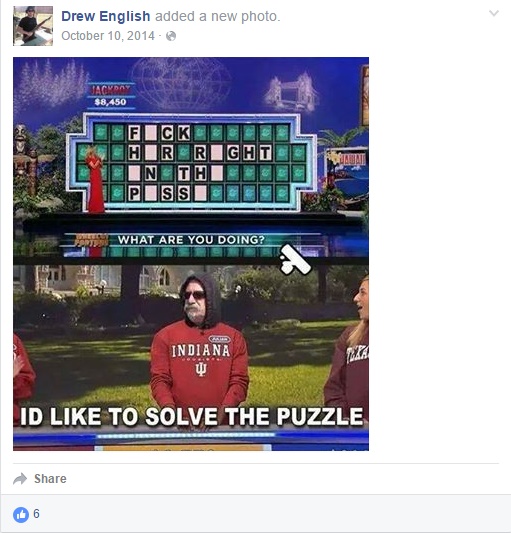 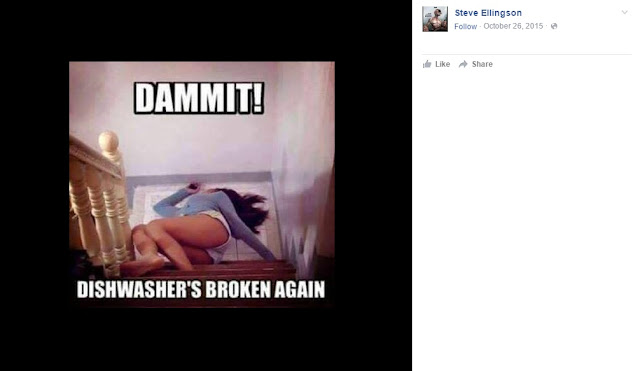 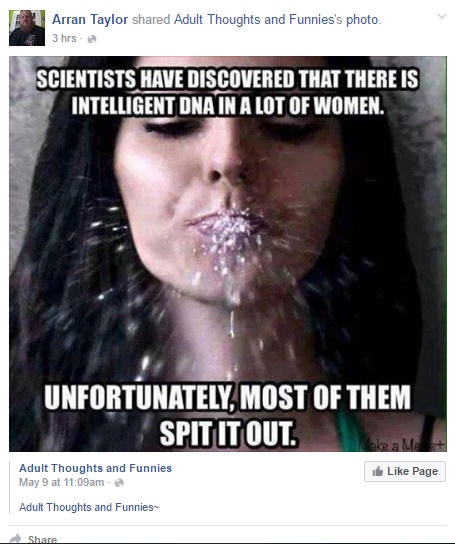 For an organization set up ostensibly to protect women, the Soldiers of Odin has a real image problem (again, that's besides the link to overt racists who are members of the SoO in good standing). That image problem begins with the name of the organization itself.

Neo-Nazi Members/Supporters of the Soldiers of Odin

Back in March we ran an article linking Canadians United 4 Canada to the Soldiers of Odin, a movement that started in Finland but which has spread to a number of other countries including Canada.

Among those Finnish members are this guy: 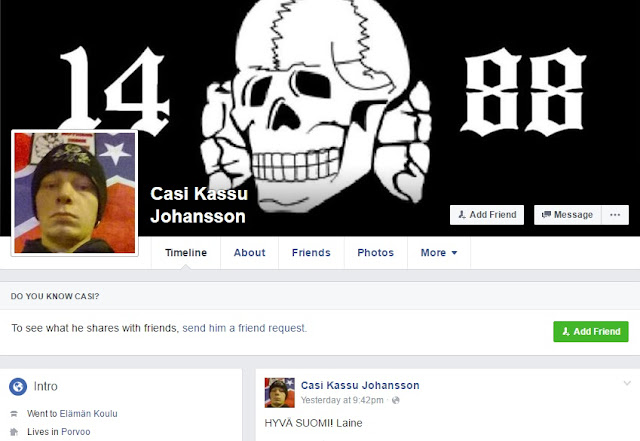 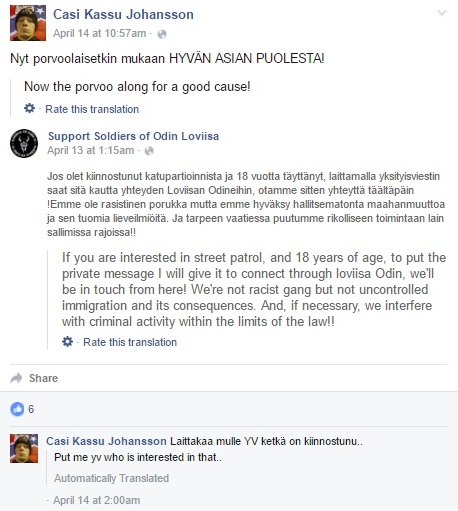 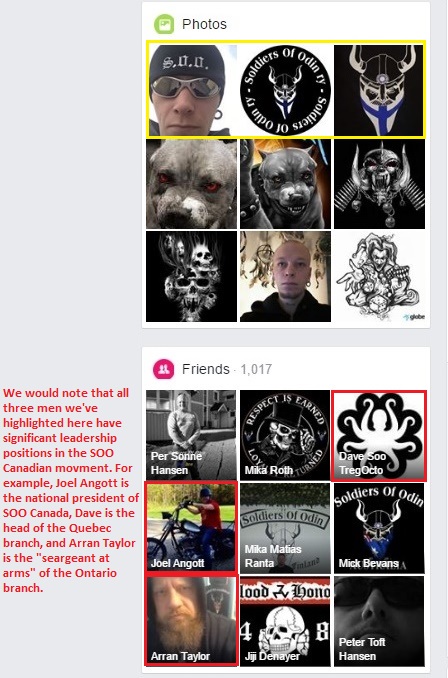 Our original article on the SoO focused specifically on the Quebec wing and noted the Quebec group consisted of a number of overt neo-Nazis. Not surprisingly SoO members and supporters denied being members of an overt hate group, going so far as to print leaflets promoting their non-bigoted bona fides: 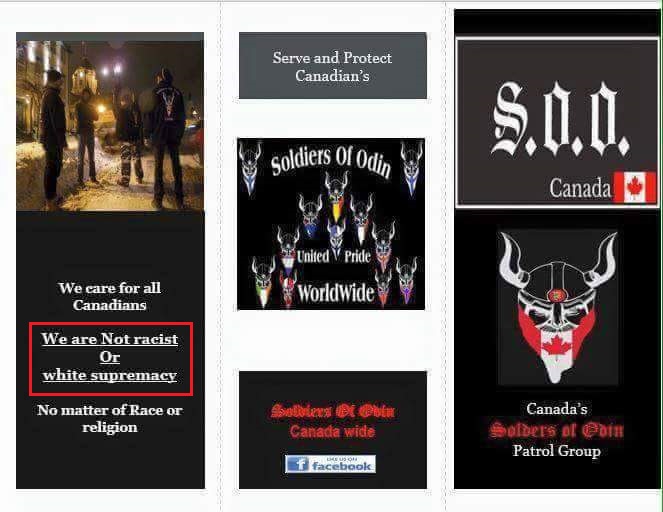 Later, a journalist writing for VICE picked up on the story (while also kindly linking to our article on the SoO) resulting in some concern from at least one provincial SoO wing: 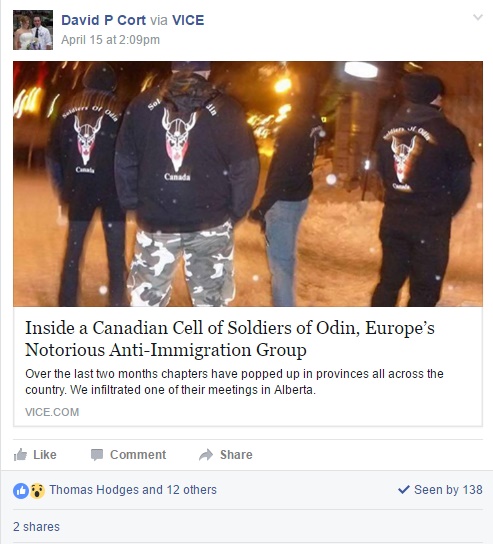 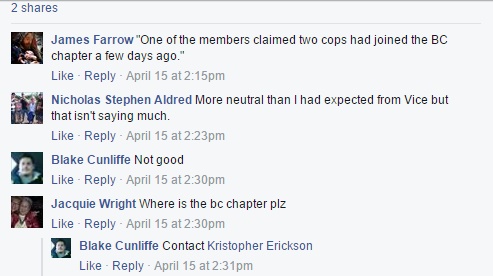 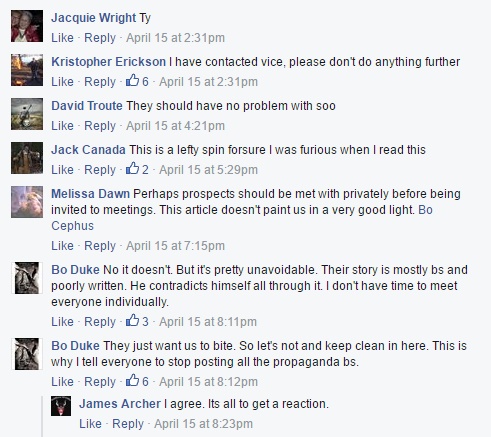 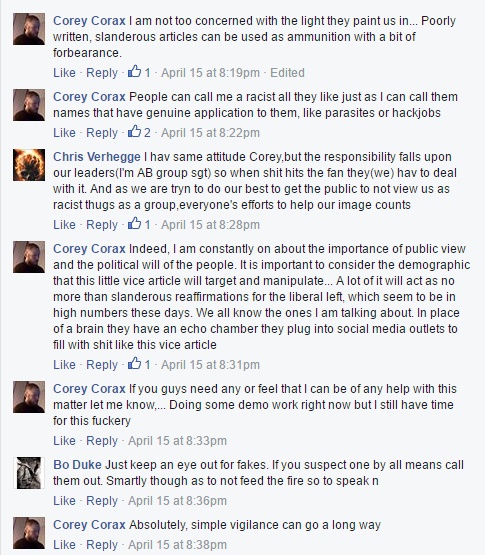 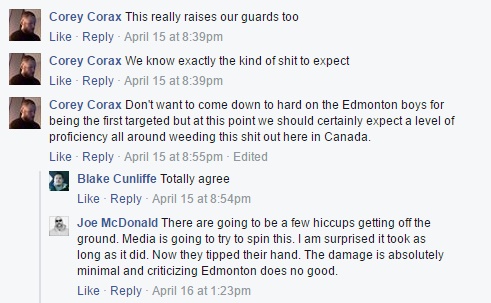 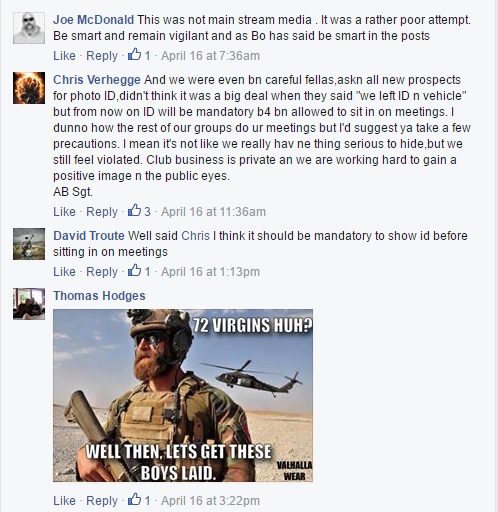 Btw, if Blake Cunliffe is concerned about how SoO might be portrayed in the media, he might decide to desist advocating political assassinations: 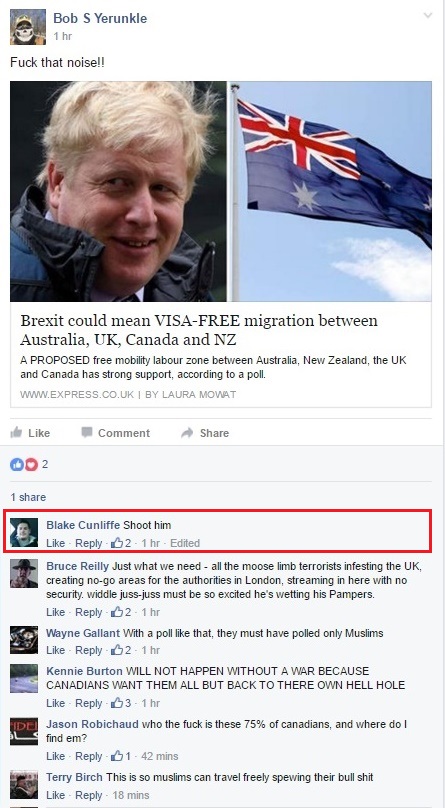 While we are no longer privy to the Soldiers of Odin's BC wing as they appear to have removed our dummy Facebook profile, we did notice that no one really ultimately challenged the underlying claims made in the article. Had they done so though, they might have had to explain this fella: