Well. This is interesting.

Police say the group — which included a very large, muscular man with a shaved head, a chubby, shirtless man with a long Afro hair style, and another man wearing a yellow cast and a lady’s blouse — assaulted two people outside a liquor store near 99th Street and 81st Avenue at about 3 a.m. on Saturday Aug. 11.

A visit to Tremaine's website now features the following: 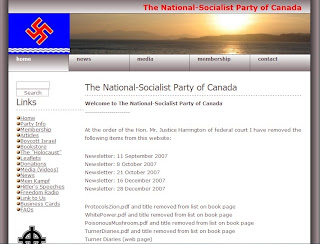 That's all well and good, but there appears to be a lot more that should be removed in order to be in compliance.

It's a start, though it looks to us to be just a start.

But consider how many years it has taken to get to this point. All he had to do to avoid his present circumstances was to  remove the offending material. No one said he couldn't be a bigot. He just couldn't post material that demonized another race or religion to the point where it puts members of those groups in harms way.

His supporters present him as a martyr. We view him as a pathetic fool who was used by the likes of Paulie and others. 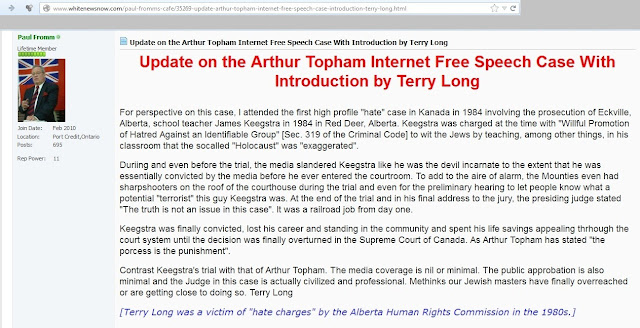 Curriculum Hateful? Yes. Anything Being Done About It? Not Really.

End of Jewish Plots and Treacheries: Ever since the Prophet’s entry into Madina, the treacherous Jews had vehemently opposed him and his Islamic call, evoking memories of their hostility to the previous Prophet, Jesus Christ, half a millennium ago. The crafty Jews entered into an alliance with the polytheist Quraish in a bid to stamp out Islam. They conspired to kill Prophet Muhammad despite the fact that he was lenient towards them and had treated them kindly, hoping to convince them of Islam’s truth. But eventually as Jewish plots and aggressions increased, he had no choice other than to take up arms against them, in order to protect Islam and the Muslims. At the battle of Khaiber which is famous for Imam Ali’s heroic exploits, the Prophet defeated them ending Jewish intrigues and conspiracies in Arabia.

This is an excerpt from the curriculum of the East End Madrassah in Toronto. To say that such language is disturbing would be to understate how vile it really is. And that this, presumably, has been taught to children?

Let's try this as an experiment:

It's either 30 days or six months depending on if Terry decides to play nice.

We're trying to see if we can get the reaction from the bonehead community and their supporters (if we do, we'll add it to this article later) but until then here's a story in the "Leader-Post":

A Saskatchewan man who refused to stop posting racist messages on websites is going to jail.

On Wednesday, a Federal Court judge sentenced Terry Tremaine of Regina to at least 30 days in jail for acting in contempt of an order of the Canadian Human Rights Tribunal.

We've been enjoying the exploding heads on the Obama haters this evening and decided to take the day off from the blog.

Then we checked our email.

B.C. man charged with promoting hatred against Jews on website

We might have more to write about this later.

And the Basis For the Lemire Appeal Is.... 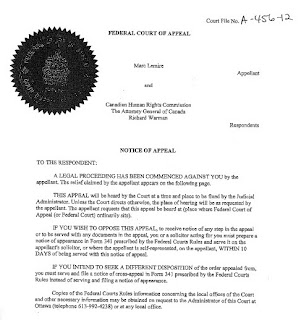 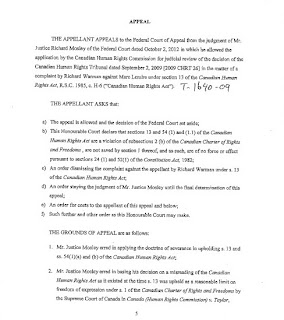 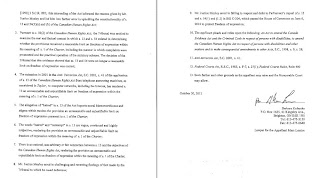 For those readers who don't have fantastic eyesight, here it is broken down: 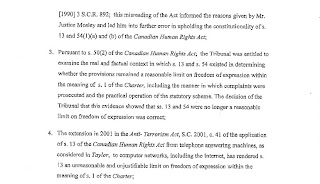 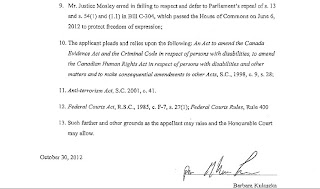 We've said it before here and we'll say it again.

Well, not appealing in any physical sense of the word. Let's face it, the dude should lay off the French crullers.

No, Marc Lemire, former member and the last leader of the Heritage Front (despite his denial) is appealing the recent decision concerning the constitutionality of the Canadian Human Rights Act. BCL beat us to the punch on this, but he also beat Lemire to it so, we're okay with that.
Posted by Nosferatu200 at 18:57 1 comment: