A Blast from the Past: Levant's and Ander's Apology to Ron Ghitter

Okay, so BigCityLib already wrote about this on June 26, but we thought it was so much fun that it warranted another look:

Debates of the Senate (Hansard)

Apology to the Honourable Ron Ghitter

Hon. John Lynch-Staunton (Leader of the Opposition): Honourable senators, I should like to read to you a statement that will be published in the Calgary Herald, The Calgary Sun and The Edmonton Journal on Friday, April 14. It will be entitled, "Apology to Senator Ghitter from Rob Anders, M.P., and Ezra Levant."

In September of 1998, we unfairly and inaccurately described the character, statements, commitment and work of Senator Ghitter in a fundraising letter circulated to 31,000 Albertans in connection with the Alberta Senatorial Election. The letter was prepared by Ezra Levant and signed by Rob Anders on behalf of the Reform Party of Alberta.

The letter was insulting and demeaning of Senator Ghitter who has dedicated over 30 years of his life to public service both as an elected member of the Legislature of Alberta, a member of the Senate of Canada, a spokesman for minorities, and a volunteer in many capacities.

Our attack on Senator Ghitter was unfounded and we now admit having defamed Senator Ghitter. We further acknowledge that some of our statements were based on facts that were false and on out of context interpretations.

We regret preparing and sending the letter and wish to apologize to Senator Ghitter and his family for our lack of civility and our inappropriate actions and comments.

Posted by Kurt Phillips at 08:46 No comments:

We're really don't understand why boneheads continue to subject themselves to the humiliation that results when they try to form coherent sentences. Yes, dear readers, it is time for yet another installment of "Illiterate Bonehead Theater."

This time we'd like to thank Rolang for writing the commentary on each of the bonehead messages that we received over the past month:

i personally think your a fucken idiot and you need to get a life and stop talking about eric like that yu fucken pieces of shyt what yur gunna "try " and stop everyone from being racist people have there own way of dealing with things and your little fucken crew or whatever you wanna call it aint gunna change a difference in this world so really you need to get a fucken life all of you cunts what you do sit infront of a computer and wire your little fucken comments as if people are really gunna sit there a listen to you you have no fucken life so get over it and suck a dick
We were going to try to respond to this but we got distracted by your mastery of the run-on sentence and gratuitous use of the word "fucken". But evidently even you didn't think you got the point across effectively and decided to try again:
what is wrong with you fags what do you do sit there and write comments about people as if your comments are really going to change a person you people need to grow up and stop talking bout eric like that really what are you going to do .. hes racists so what .. so are half this world and do you plan to stop people out in this world... its a world of hate as if black people dont hate on us too it goes both ways and if he dont like black people thats his thing not your problem .// so get a life this is so stupid omggg hahahaha

We appreciate your attempt to use punctuation this time, although we'll have to consult Strunk & White to determine if that's the proper placement of ".//".

You guys have way too much time on your hands. Just because you got A's in gr. 8 spelling bees doesn't change the fact that you are all keyboard kommandos. We walk around Toronto without fear and I've never in my experience ever been approached by any "antifas". Unless of course there were at least 10 and I was alone.

You walk around Toronto without fear because your existence is absolutely irrelevant to the 2.5 million people who live there, minus maybe 6 or 7 of your buddies. We actually feel kind of sorry for you. You live in Toronto. One of the world's most multicultural cities. A city with the official motto "Diversity Our Strength". It must just kill you to have to walk around every day and bear witness to the rampant cultural and ethnic diversity, the flagrant disregard for racism and exclusion.

And the race mixing - oh, the race mixing! Italians getting it on with Chinese. South Asians bumping uglies with Jamaicans. Kenyans knocking boots with Swedes. All day, every day. It must be too much for you to bear.

Our point is, we ridicule you because it's fun for us. Frankly, we assumed you had a sense of your own unimportance and would be grateful for the attention.

Thank you ladies and gentlemen. We're here all week. Try the buffet and remember to tip your waitress or waiter.
Posted by Kurt Phillips at 00:23 4 comments:

Though it's a bit old now, we found this to be an interesting article worth sharing with our readers:

Before the Internet, James Von Brunn, the self-proclaimed white supremacist, anti-Semite and Holocaust denier who stands accused of murder at the United States Holocaust Memorial Museum, was relegated to using the mail to communicate his rage with like-minded haters. The only place for him to have his benighted views applauded was in sporadic clandestine meetings.

The Internet changed all that. Like his fellow bigots, Von Brunn found the Internet a boon to his warped causes. His maintained a hate Web site, "Holy Western Empire," where he touted and provided excerpts from his book that denied the Holocaust and praised Hitler. And online, in chat rooms, on bulletin boards and through links to other haters’ Web sites, Von Brunn had a virtual fan club, who cheered him on and legitimized his vicious thinking.

We will never know whether Von Brunn’s rage would have burned out but for the Internet, but we do know that he found validation for the rage he harbored on the Internet.

At the U.S. Holocaust Memorial Museum, where Von Brunn unleashed his hateful rage by killing Security Guard Stephen Tyrone Johns, there recently was an exhibit on the power of Nazi propaganda. The exhibit showed how the Nazi propaganda machine skillfully spread lies about Jews and perpetuated centuries-old anti-Semitic stereotypes, setting the stage for the Holocaust.

Today, the Internet Von Brunn used is a powerful and virulent platform for anti-Semitism - hate toward Jews that has a direct link to the deterioration of civil society, violence, terrorism, and - as we now know - murder. Hitler and the Nazis could never have dreamed of such an engine of hate.

The Internet as the new propaganda machine for anti-Semites is not under the central control of a political party or group. It gains its power by being viral in nature. Everyone can be a publisher, even the most vicious anti-Semite. Hate begets hate, and its common appearance makes it seem acceptable and normal. Internet hate is what kept Von Brunn’s hateful lunacy at the boiling point.

And, perniciously, Internet hate speech serves to mislead and even recruit young people to become the next generation of anti-Semites and, perhaps, murders.

Since its advent, we have been concerned about the incredible power and reach that the Internet has given anti-Semites and bigots. What has developed in the past few years, however, is much more dangerous. We are now in the world of what is called "Web 2.0,"transforming the way the Internet is being used. Any hater and propagandist can reach a mass audience, even an audience that didn’t think itself receptive to such hateful ideas. With the users of Web 2.0 comprised largely of younger people, the impact of the information posted there may persist for generations to come.

Blogging and social media sites are changing the way people communicate their reactions to events in the news and interact with each other. Those who harbor anti-Semitic beliefs are comfortable expressing themselves in cyberspace, where they can provoke a reaction from others or find like-minded individuals to affirm their beliefs.

In the aftermath of the Madoff revelations, the comments section following ordinary news stories contained rages against Jewish people for controlling (and ruining) the world’s finances. And YouTube frequently is the home of hate-filled replays of Nazi propaganda films.

The perniciousness of anti-Semitism on today’s Internet is that the more one sees it, the more one is likely to consider it normal, and acceptable. Good people are numbed by the proliferation, and daunted by the task of responding. Others consider it a reflection of what is acceptable in society. And then there are those on the fringe, like Von Brunn, who use such content as justification for murder.

The First Amendment protects essentially all hate speech, except that consisting of direct threats against specific people. But that does not mean we should throw up our hands and simply accept hate on the Internet as something that will always infect the Internet. There is a role for Internet users, for Internet companies and for educators. We should speak up when we see hate sites, explain to our kids what they are seeing, and counter the vicious lies.

Those offering Internet services with terms of use that prohibit hate speech should enforce those terms and remove offending content. And it is time for Internet education as a requirement in all schools, to teach kids how to filter what they are seeing and to reject hate online. (The epidemic of cyberbullying alone should inspire such attention to kids using the Internet.)

A fitting memorial to museum guard Stephen Johns would be for society finally to address hate on the Internet in a meaningful way, to prevent the next Internet-inspired murder.

Christopher Wolf, an attorney in Washington D.C., is Chair of the Anti-Defamation League’s
Internet Task Force and Immediate Past Chair of the International Network Against Cyber-Hate.

In light of the effort to gut or completely dismantle the CHRC and CHRT, this article is certainly food for thought.
Posted by Kurt Phillips at 01:01 2 comments:

Hey, look what we managed to get a hold of:

At some point in the fall of 2005, the website of the , white supremacist group (www.northernalliance.ca) went down for reasons that remain unclear. Although still too early to herald the group’s demise, there are suspicions that the financial woes of leader Jason Ouwendyk, who sought bankruptcy protection in December of 2004, may be the cause. At the time of his bankruptcy protection, Ouwendyk owed approximately $50,000 to creditors, including $12,500 owed to the author of this article. This was after his bankruptcy trustee accepted the full claim for damages and costs in a small claims libel suit against Ouwendyk as a result of comments made on the website.

Ouwendyk seems to be out of the picture for the most part, however David Ruud appears to have taken up the mantle of Northern Alliance spokesperson. And considering the work he's done in that regard, it really does look like the Northern Alliance is pretty much kaput.
Posted by Kurt Phillips at 21:52 No comments: 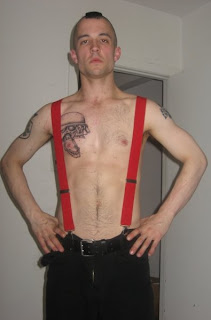