Back in November we wrote an article comparing the rhetoric found in contemporary anti-Muslim Facebook groups (focusing specifically on PEGIDA Canada) with that of the Nazi propaganda:


Not long after the German occupation of Poland, Nazi propagandists produced the film, "The Eternal Jew." The film, presented as a documentary, was an especially pernicious and sadly effective piece of propaganda that aimed at normalizing hatred towards the Jews of Europe by presenting them as sub-human deviants and liars who fed off their hosts like parasites. The film was an attempt by Nazi propagandists to justify to the German people what was soon to come. It dehumanized Jews to the point that extermination was reasonable in order to maintain the racial integrity of the state and which was no worse than killing rats. "Patriotic" Germans could watch this film filled with blood libels and feel perfectly justified in viewing the Jews as somehow lesser. Worse than "lesser" in fact.

The themes of, "The Eternal Jew" examined such areas as Jewish religious practices, Jewish manipulation, Jewish degeneracy, Jews as not being truly human, and the Jews as "parasitic." Though claimed as a documentary, most of the subjects were forced to participate under duress by the occupying power and much of the footage was actually cut from pre-existing feature films and presented as real footage. The only documentary footage in the film was shot in the ghettos of Krakow, Warswa, Lodz, and Lublin.

As a student of history, this writer was well acquainted with this propaganda film and the language of dehumanization that was used to justify hatred. This writer was also troubled by the parallels that exist in the rhetoric used in the propaganda film and that which is currently being used to describe Muslims in Canada by PEGIDA Canada supporters.

As we've noted in other articles (including our most recent) PEGIDA Canada and its supporters is not the only such group that emerged on social media. In addition to PEGIDA Canada, the members of ARC are also following Canadians Against Justin Trudeau, WCAI (Worldwide Coalition Against Islam), III% Canada, Canada Defence League, Never Again Canada, and Canadians United 4 Canadians among others. The members of all these groups express the same dehumanizing and malignant hatred that in the past resulted in genocide: 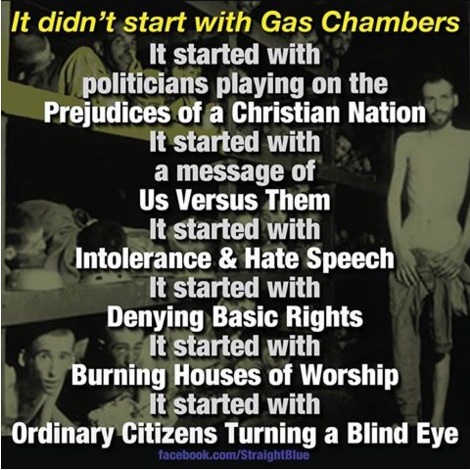 It is interesting then that a member of one of the aforementioned anti-Muslim groups would have posted this very same infographic to  Canadians United 4 Canadians wall: 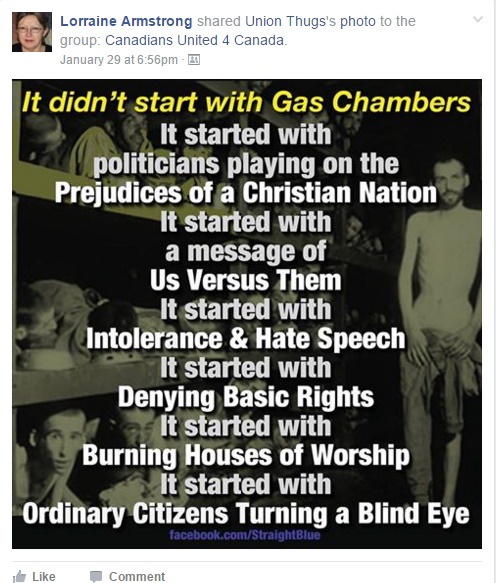 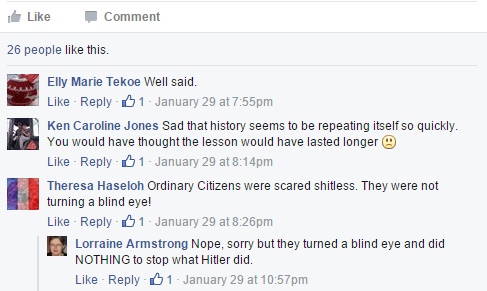 It is particularly puzzling when one looks at other comments, links, and images they have posted both on the anti-Muslim group's and their own Facebook walls:

The results were underwhelming:


The organizers did receive laudatory comments regarding the demonstration, but there was also some level of despondency as well: 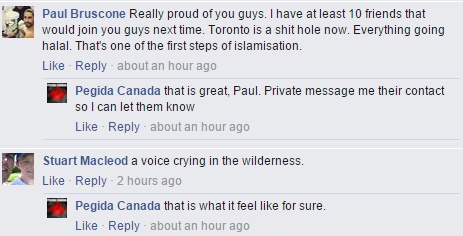 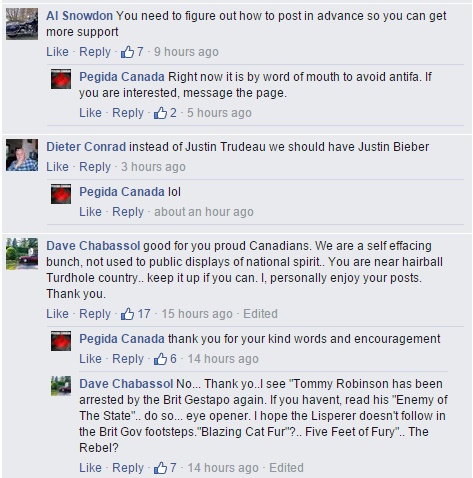 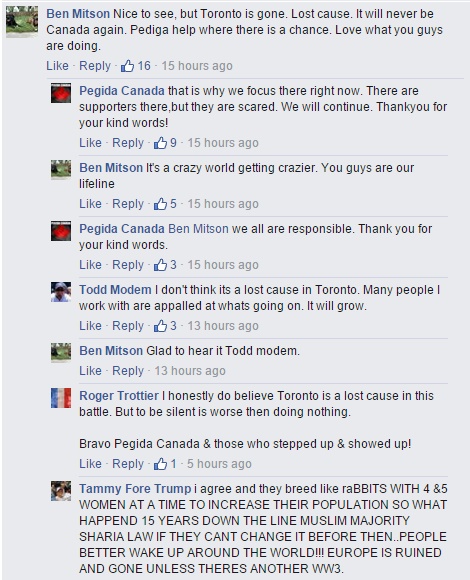 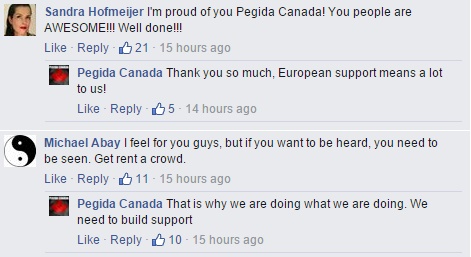 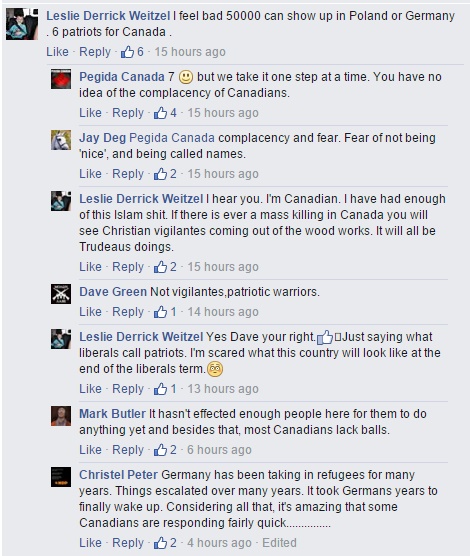 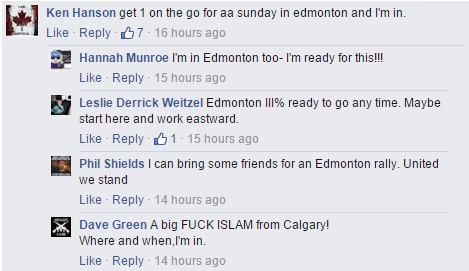 In some ways this should cause us some degree of optimism. PEGIDA Canada's coming out party in Toronto was tiny and dwarfed by a much larger contingency of anti-fascists and progressives who opposed them (thus earning "antifa" the antipathy of PEGIDA Canada from that point on). Their subsequent two "flash" demonstrations have been pathetically small and even by their own accounts opposed by most of the people who came across them. Still, the violent rhetoric of groups like PEGIDA Canada and other similar anti-Muslim, anti-refugee, and anti-government groups is still of concern because of their online support. In the case of PEGIDA Canada at the time of the writing of this article the group has been "liked" by a little over 10,000 individuals: 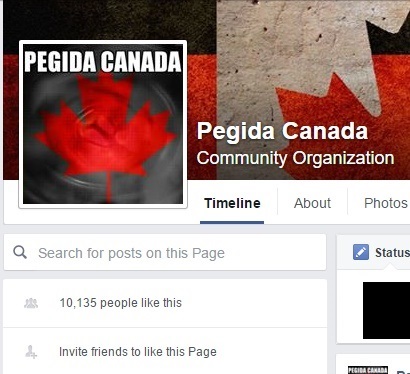 That number, 10,135, may include people such as ourselves who are monitoring the group as well as some who were merely curious. It may also include individuals who are concerned about the refugee crisis but who don't actually look at the group page and are unaware of the toxicity of the rhetoric of PEGIDA as well as those who actively support it, though we are perhaps being kind. However, even the in the best case scenario, this number indicates that there are a number of people who may be and already have been radicalized by PEGIDA Canada's (and like-minded movements) message.

We understand that this term has been used almost exclusively when referring to Muslims radicalized by extremist interpretations of Islam, but it hold true for the individuals who have been fed a steady diet of fear and loathing directed at Muslims, be they Canadian born, immigrants, refugees, or Muslims living outside the country as well. They have been convinced to distrust any contrary information that does not conform to their pre-existing prejudices and those prejudices have been reinforced in an echo chamber that demonizes and dehumanizes Muslims and/or any who doesn't view Muslims with hatred. Once this happens, anything is justified as evidenced by some of the screen shots we've taken from PEGIDA Canada's Facebook page over the past number of months:

Read more »
Posted by Kurt Phillips at 15:47 No comments:

In our previous article we noted the reaction of the anti-refugee folks on social media paying specific attention to a few Facebook groups. And we received condemnation from the usual suspect about how intolerant we were for commenting on the extremist nature of the comments. However, on twitter, we received feedback from from someone quite unexpected: Have to say, were were quite pleased to see that Paulie was finally interested in playing as for the longest time he had difficulty even saying or writing out name, never mind attempting to engage us in a discussion. Not wanting to pass up the opportunity, we sent him a follow-up since we've had a question that Paulie is uniquely qualified to answer:

Thus far, Paulie has not responded. We'll be sure to keep our readers up to date however.
Read more »
Posted by Kurt Phillips at 18:53 No comments:

We woke up this morning to read this on CBC:

A crowd of refugees attending a welcome event at the Muslim Association of Canada Centre in Vancouver was pepper sprayed by an unknown man on a bicycle.

It happened outside the centre on the Kingsway near Victoria Drive around 10:30 p.m. as the event was winding down and the group of newcomers to Canada was waiting for a bus.
....
The National Council of Canadian Muslims (NCCM) sees the attack as potential hate crime.

"This is an act of cowardice condemned by all Canadians of conscience. We call on local authorities to investigate this assault as a potential hate crime so a clear message is sent that such abhorrent acts have no place in our communities," said NCCM Board Chair Kashif A. Ahmed, a Vancouver-based lawyer.

Nawal Addo, 17, was raised in Canada, but was outside with the group at the time of the attack.

"We were just standing outside and we all just started coughing and our eyes were burning. We were really confused about what was going on," she said.

Ammar Ramadan was inside the building at the time, but soon noticed the chaos outside.

"Next thing you know, people are running and screaming, everyone's dashing inside. A bunch of kids were crying. I was a little confused as to what was happening."

While most may condemn the attack, a proportionally small but violent few praise it. On the Facebook group, Canadians Against Justin Trudeau, a group that is equal part attacking Trudeau, refugees, and Muslims in general, the following was posted: 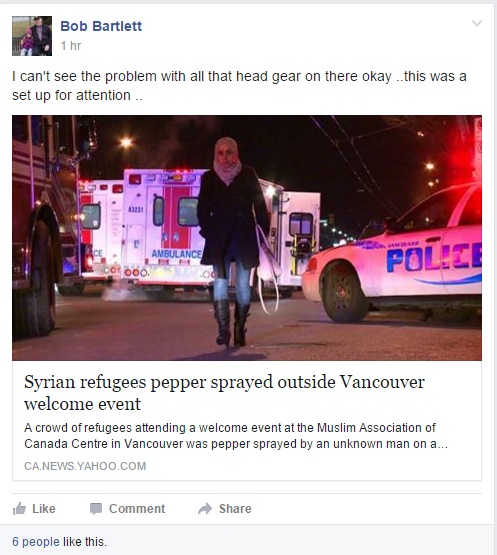 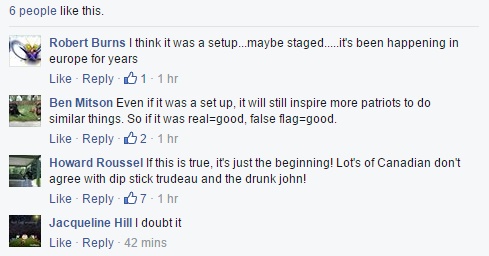