Racist gangs are pretty notorious for their misogyny. While the men talk about brotherhood and honor, they tend not to trust the women. At best, women in the racist movement are viewed as baby factories. At worst, trojan horses who's presence will bring down the movement. Then there are the majority who seem to view women as a warm, moist place to stick their penis' in and to bring them beers. Are members of the Aryan Guard any different? 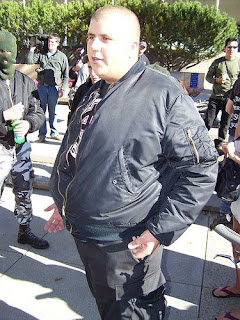 Once again, meet John Marleau, one of the more high profile members of the Aryan Guard. We've been keeping tabs on Marleau for a while now, mainly because he's a loud and obnoxious jackass who calls attention to himself.

Marleau appears to be one of those misogynists. We first noticed this when he began threatening women online who were calling him on his racist rhetoric (one woman was a 12 year old girl, though that didn't actually stop John's text assault).

Recently, Marleau proved that he would attack not only anti-racist women, but even women who claim common cause with him, including the girlfriends of his racist buddies.

The whole affair began innocently enough. Dallas Price's girlfriend Kendra uploaded a picture of herself and her friend M.J. on Facebook. M.J. stated that the two were 'sisters' presumably in the same way that the male members of the Aryan Guard were, 'brothers.' Marleau took objection to this: 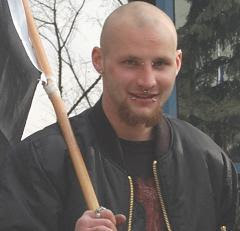 Some time between April 26 and May, Tyler Sturrup was arrested and was held in custody by the police. For close to a month.

Wait. Did we say shocking update? What we meant was run of the mill ordinary news when it comes to the Aryan Guard. Our mistake.

Okay, we have to admit that we missed the boat on this one so this isn't exactly breaking news, but we are including this now as it's one more nail in the coffin.

We can add Tyler to the long, and ever growing list of Aryan Guard members who we know have spent time locked up behind bars or who have otherwise run afoul of the law:

For all their crying about 'non-white' crime, we think one would be far more likely to be victimized by the average Aryan Guard member than any ethnic minority one might meet on the street.

We presume that Sturrup is out by now and in the loving arms of his girlfriend M.J., a lovely young lass who likes to post nasty little messages here (under the Nom de Guerre that will remain without mention as of this September 17, 2008 edit). We'll have more later as we continue to document the simultaneous destruction from outside forces and implosion from within of the Aryan Guard.

The Pettiness of Ezra Levant

We haven't spoken much about Ezra Levant and his issues with the Canadian Human Rights Commission or with Richard Warman. We're more than happy to leave all that to those with an intimate knowledge of the legal system while we focus on the street thugs; we know our place on the totem pole and we're happy to have carved out our particular niche. However, we couldn't let Levant's latest missive go without comment, mainly because it is so ridiculous and petty that it actually renders the rest of his arguments about the CHRC, well, you decide.

Here is what Levant wrote under the title, Athanasios Hadjis, jet setter:

Winnipeg Neo-Nazi May Get Back Children

We've already written about "Nazi Mom", the Winnipeg neo-Nazi mother who lost her children to Child and Family Services as a result of her husband "Nazi Dad" drawing Swastika and other racist symbols on her daughter and sent her off to school.

Well, it looks like she has now left "Nazi Dad" for a second time, a gesture that has convinced Child and Family Services that, perhaps, they could start re-integrating the children into her home with the goal of returning them for good.

While we will not take a position on whether or not the children should be returned to their mother, we are struck by her, "inconsistencies." You see, "Nazi Mom" also has an online identity. So, as "Nazi Mom", she'll say to the reporter interviewing her, "he's [her now estranged husband] a bigot. And I have no tolerance for bigotry or ignorance," she says the following as aryanprincess1488 on the Resistance Records forums (spelling errors are hers):

May 9, 2005: Hey all, I don't post much (I haven't an awful lot of time) but I showed my 12 year old niece this site and although I don't think she's logged on here she has informed me that she visits this forum regularly, and since I haven't been able to see or talk to her too much it's good to know that there is a place of rational and intellectual disscussion where she can come to learn more about the movement.
Winnpeg is infested with indians and other such inferiors, she's being taught in school that we're all equal and that not one race is better than another, but she is learning and I thank you for the intellegent conversation that takes place in this forum.
14/88

Seems pretty bigoted and intolerant to us. Why don't we look at a few other comments that "Nazi Mom" has said when interviewed regarding the loss of her children from the "Winnipeg Free Press":

We received two email asking why we haven't said anything about the children whom Child and Family Services took from their home after one of the children went to school with a swastika drawn on her, as well as other nazi symbols. Oh, dear readers, don't think for a moment this one has slide under our radar. We've been following this quite closely and we know the name of the father involved and the group he used to run with. Since children are involved and we don't want to run afoul of the law, we'll tell you what we think we can say at this point:

1. The father's initials are [removed]
2. "Nazi Dad" and his now estranged wife, "Nazi Mom" live in Winnipeg, however at least he used to call Brandon, MB home for a period of time.
3 "Nazi Dad" has a profile on the White Nationalist social networking site "New Saxon."
4. "Nazi Dad" and "Nazi Mom" have posted on Stormfront, though neither have been active for some time. They also both posted, fairly briefly, on the Blood and Honour boards. Seems they were trying to start some sort of group in Winnipeg, but managed to antagonize most of the other Blood and Honour forum members whom they came in contact with.
5. "Nazi Dad" was a member of a small neo-Nazi group based out of Brandon and Winnipeg, though it likely was mostly a web based movement comprising less than 6 individuals:

And Another One Bites the Dust: Richard Warman Takes Down Der_ Totenkopf

We updated the One Peoples' Project with the following news article (it should be up within the next day or so) but in the meantime, here's the story that will be printed.

Add Ciaran Donnelly to the list of Canadian neo-Nazis that Richard Warman has effectively dealt with. Donnelly and Warman have come to a mediated resolution in Warman’s human rights complaint against Donnelly who posted as Der_Totenkopf on Stormfront, Blood and Honour and other Internet hate site forums. As part of the resolution, Donnelly is required stop posting hate propaganda online and to desist from further retaliation against Warman, permanently close his Stormfront account and request that all his past posts be removed, and finally to donate $1000.00 to the charity of Warman’s choice.
Read more »
Posted by Nosferatu200 at 21:17 4 comments:

The fact of the matter is, Scott has stolen over a thousand dollars in cash, and nearly the same in property from two single moms who did nothing but take care of him for the last two months. He's lied, cheated, and went so far as to steal a childs toothfairy money. He beat himself up to play off an RCMP hostage situation, because he spent MY MONEY on drugs... and this isn't the first time, and it certainly wont be the last. If anybody wants the true story of what is has and always will be scott alexander wilford king... contact ***, the nutcase psycho bitch ex... who has a stack of proof 10x that of his pile of lies.
Read more »
Posted by Nosferatu200 at 00:42 4 comments: