To tell this tale, we're going to jump between Stormfront and Blood and Honour / Combat 18 (B&H/C18) forum discussions.

A month ago yesterday, a Canadian Stormfront member posted a message on Stormfront regarding a shindig that Volksfront Alberta is organizing for December:

While Volksfront itself has been around for a few years, but they're sort of the new kids on the block in Calgary. Of course given their affiliation with the Blood and Honour faction opposed by the Combat 18 affiliated faction, their presence in Calgary might be seen as problematic by the Aryan Guard, most of who's members have put on a C18 patch.

"O'neil bc" was, and still seems to be, very much involved with Volksfront in British Columbia. We don't know if he's in any leadership capacity, but that's not all that important now. The group in Calgary appears to have Scott Sinclair running the show. Sinclair is from Manitoba but has spent time in the Atlantic provinces with the boneheads out there and has been in Calgary for some time now.

So, how did the C18 affiliated Aryan Guard respond on the B&H/C18 forum? Surprisingly, the initial response was favorable:

This past Friday many boneheads commemorated the 17th anniversary of Ian Stuart Donaldson's own curb stomping.

Ian Stuart, after returning home from an evening out with some friends in Burton-on-Trent, Staffordshire, died in an automobile accident, when his car spun out of control and ended up in a ditch. One passenger died instantly, while three others received neck and back injuries. Stuart was rushed to a hospital, and was pronounced dead the following morning. Despite such a high-profile death, there was no major investigation by the authorities, leading many to speculate everything from foul play to a staged fake death. Some insiders say Stuart had become disillusioned with the movement he had created, and might have, with the help of higher powers, staged his own death in an attempt to remove himself from the situation.

And as such we thought that we would use this opportunity to again act in a childish manner and make fun of his worshipers.

A few weeks ago Richard Marleau posted the following message on an anti-Aryan Guard Facebook group:

Earlier that month, on July 3, the woman had been sitting in her living room when she heard a man outside making gunshot noises. She looked out her front window and saw her neighbour, Martin, on the sidewalk making gestures with his hand as if he were shooting a gun at her house.

Nine days later, the woman heard Martin and another man in the parking lot outside her bedroom window. They were loudly singing songs with racially offensive lyrics and yelling, "Go back to Africa."

The woman filed her first police report the next day. Two days later, as she and the 11-year-old girl were walking to the local variety store, they were confronted by Martin and Gill. Martin again made the gunshot noises and the sign of a gun in her direction.

When the men began to spew their racial slurs, the woman and child turned and headed for home. The woman told police Gill was close behind them as they ran inside the house and locked the door. Gill then began to pound on her door.

Once inside, the woman, the young girl and the child's mother moved to the middle of the home for fear that the men would break windows. After police arrived and took a second report, the two women took turns sitting guard on the porch through the night in case of further trouble.

And as a result of his profound bravery in intimidating two women and an 11 year old child, Martin's friends consider him to be a prisoner of war:

Paulie on the Campaign Trail

We have to admit that we are torn when it comes to covering Paulie's futile mayoral campaign. On the one had, we find it funny as hell that he's going to be thumped by an 89 year old woman and that there has been absolutely no mainstream coverage of his efforts. On the other hand, we're providing him with publicity by writing about him.

Aw, what the hell!

Paulie attended the candidates forum where he was able to explain his views to a multi-ethnic crowd who, surprisingly, were not all that receptive to his message. However the best part is how catty he becomes when he writes about how the elderly incumbent picked on him:

Get Over Yourself "Travis"

Your name is Bernie Miller.

Hell, we've known who you are, as well as Eric, Bill, Jonathan, Trevor and others, for months.

Did it occur to you that maybe the reason why we haven't written much about you is because there's nothing much to say about you? Sorry, but your significance is pretty much nil at this point.

We do like the Kevin Goudreau avatar though. That sort of made us laugh a little.

Oh, Richard Martin, You Are A Special Kind of Stupid: Part III (The Sentencing) 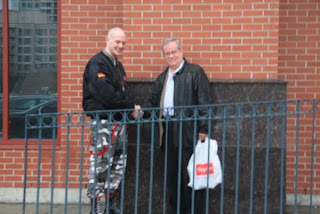 Richard Martin, pictured here with Paul Fromm and who plead guilty yesterday to charges related to ethnic intimidation, was sentenced to 9 months in prison today which will be followed up by three years probation upon his release (the other guy, Shane Gill, received 6 months). With the time he has already served, Martin will be behind bars for a little under 8 months.

Looks good on him.

Now, for those who might claim that he's in jail simply for saying a few bad words, consider the following:

1. He systematically intimidated a woman, her child and her mother, apparently for weeks.
2. He intimated he would shoot them on a number of occasions; whether he had the ability to carry out the threat isn't relevant, but the terror he intended to result from his threat is.
3. He and Gill followed this woman and her child to her home and started banging on the door.

He might have gotten off on arson and vandalism charges, but at least he's getting put away for a few months.

Paulie Endorsed By H. L. Mencken's Magazine? Not So Fast

We'll preface this entry by stating it really is important to stay awake in history class. You never know when what you learn will become important for practical purposes.

We wrote a few days ago about how Paulie wasn't having a hell of a lot of luck drumming up mainstream media attention for his campaign (perhaps, being burned by covering his protests of Tamil refugees as if he were a legitimate person of interest and not the Pied Piper of the Canadian bonehead scene, they opted not to write much about a man who will be crushed in a municipal election by an 89 year old woman). Not to say that no mainstream news source will give him a forum, but it hasn't happened yet. Until now, Paulie has had to be content to brag about appearing on an Internet radio program hosted by another failed politician and confirmed racist himself.

Imagine our surprise when Paulie announced on Stormfront that he had been endorsed by no less than the H. L. Mencken-founded, "American Mercury" magazine:

Oh, Richard Martin, You Are A Special Kind of Stupid: Part II

Remember the story about Richard Martin and another schmuk being arrested for ethnic intimidation?

Looks like Martin won't be moving to Calgary to join his friends Andrew Benson an Mike Gaio any time soon:

A pair of hate-mongers will be sentenced Thursday for threatening behaviour and racially motivated harassment of a young black woman who lived on their street.

Curious to Know How You'll Explain This, John

Remember a few months back when the Aryan Guard, in the midst of their feud with W.E.B, posted some pictures of Reitmeier and Johnson cavorting with people were, shall we say, not exactly the Hitlerian vision of Aryan:

Yes, this one is especially interesting. We remember the folks on the Blood and Honour (C18) blog making comments about Reitmeier and his choice of photographic partners. We also seem to recall Marleau writing a thing or two about it. Suffice it to say, they were none too pleased as accusations of "race traitor" were posted.

So, who's announcement has garnered more media attention? Not Paulie.

B&H vs. B&H(C18): Stormfront Moderator Takes A Side

There is a context for this latest pissing contest which we will comment on in a few days, but in the meantime we thought we would contribute we can to sowing further dissension by providing a bit of a prologue.

We've written in the past about the mostly online arguments between the two rival Blood and Honour factions, the one aligned with Combat 18 and the other with the Hammerskins and Volksfront. The latest chapter as it pertains to the situation in Canada began on Stormfront a week or so ago and includes the following exchange, beginning with John Marleau announcing the launch of a new Blood and Honour website his faction created:

This announcement resulted in an exchange begun by Shawn MacDonald