This past Friday many boneheads commemorated the 17th anniversary of Ian Stuart Donaldson's own curb stomping.

Ian Stuart, after returning home from an evening out with some friends in Burton-on-Trent, Staffordshire, died in an automobile accident, when his car spun out of control and ended up in a ditch. One passenger died instantly, while three others received neck and back injuries. Stuart was rushed to a hospital, and was pronounced dead the following morning. Despite such a high-profile death, there was no major investigation by the authorities, leading many to speculate everything from foul play to a staged fake death. Some insiders say Stuart had become disillusioned with the movement he had created, and might have, with the help of higher powers, staged his own death in an attempt to remove himself from the situation.

And as such we thought that we would use this opportunity to again act in a childish manner and make fun of his worshipers.

A few weeks ago Richard Marleau posted the following message on an anti-Aryan Guard Facebook group:

Efforts to access the Aryan Guard website now takes one to a brand new Blood & Honour Canada website, this one of the C18 faction. And while the announcement was shot down on Stormfront, Marleau found a very receptive audience when he announced the new website on the Combat 18 forums: 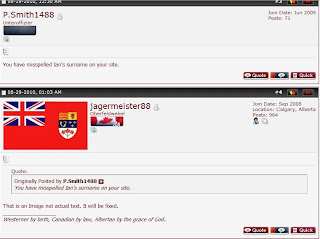 Yep. The people who look up to Ian Stuart Donaldson as if he were a martyred demi-god couldn't spell his name correctly on a website that is, in large part, a response to his memory.

And that's not all they had to fix: 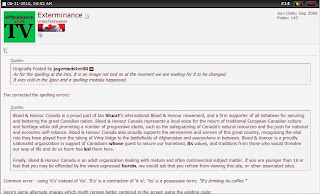 Now we're certainly in no position to comment on spelling and grammar, but then again we aren't also purporting to be of a superior race. Besides, they fixed it. Further embarrassment averted.

Except that if you continued reading, you'd find this after the criticism concerning the incorrect spelling of Ian Stuart Donaldson's name: 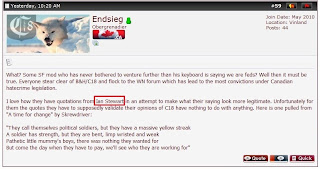 Less than 60 posts later, they fuck it up again.

Is this petty of us? Sure. Can we live with the knowledge of our occasional pettiness? You betcha!

If our dear readers are wondering about the remainder of this thread, stay tuned. We so love internecine conflicts amongst rival bonehead gangs.
Posted by Kurt Phillips at 16:25

ARA Calgary and many, many Calgarians beat them when they were called the AG. They can change their name all they want, they're gonna get beat again.

No, they're totally different now. Before they were all about guarding Aryans now they're all about ... I dunno ... honouring blood I guess?

Bill noble is a clown. Hangs around little kids(makes you wonder)
Its because everyone of them who did jail time spent it in protective custody.(real hardcore) Maybe boxcutter billie will hang around with goudreau and live in fantasy land.

Still Blood and Dishonour in my book.
Aryan Terror Brigade? Please. The Aryan Guard clowns now fronted as BH? Ian is rolling in his grave.

Same jerkoff outcasts making a sad attempt to gain more support. Oh wait, its working. They recently had Mike G and Andrew Benson join their ranks... wait, didn't puddles even follow Goudreau for a while?