Paulie Endorsed By H. L. Mencken's Magazine? Not So Fast

We'll preface this entry by stating it really is important to stay awake in history class. You never know when what you learn will become important for practical purposes.

We wrote a few days ago about how Paulie wasn't having a hell of a lot of luck drumming up mainstream media attention for his campaign (perhaps, being burned by covering his protests of Tamil refugees as if he were a legitimate person of interest and not the Pied Piper of the Canadian bonehead scene, they opted not to write much about a man who will be crushed in a municipal election by an 89 year old woman). Not to say that no mainstream news source will give him a forum, but it hasn't happened yet. Until now, Paulie has had to be content to brag about appearing on an Internet radio program hosted by another failed politician and confirmed racist himself.

Imagine our surprise when Paulie announced on Stormfront that he had been endorsed by no less than the H. L. Mencken-founded, "American Mercury" magazine: 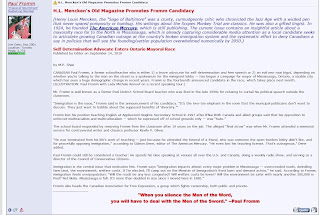 As we on occasion aspire to be considered journalists (about 5% of the time; the other 95% we really just shoot making boneheads look stupid, then pointing and laughing at them in a derisive and immature manner), we are well aware of the influence of H.L. Mencken on modern journalism. The legacy of the "American Mercury" when it was edited under Mencken (he left the publication in 1933) and it's later owner and later owner and editor Lawrence E. Spivak lives on today through, "Meet the Press" which was created by Spivak to promote the magazine and which is still considered one of the most respectable news programs in the United States to this day.

Sadly, the magazine declined precipitously after the departure of Spivak as readership declined. By 1952, George Lincoln Rockwell, future leader of the American Nazi Party, was writing for the publication which by then had become a fringe journal that few people read any longer and which catered to anti-Semitic and anti-African American diatribes (other writers included Gerald B. Winrod and General Edwin A. Walker). By 1966 the "American Mercury" was purchased by Willis Carto, thus completing it's devolution from legitimate and respectable journalism to the publishing of racist and paranoid screeds read by only 7000 people or fewer.

So knowing what became of the once great journal, we actually aren't surprised that the "American Mercury" would come out in support of Paulie.

What we are surprised by is that a journal that ceased publication in 1981 would be able to support anyone.

Yep, the original "American Mercury" who's origins could be traced back to Mencken hasn't been published in years. Yet, here we have Paulie claiming that he has been endorsed by this American journal. Sure enough, a quick web search found the website: 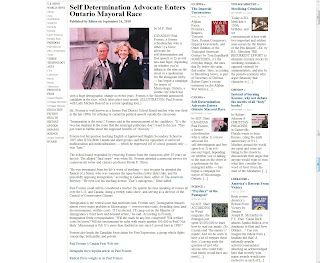 We're getting better at splicing pages together, aren't we?

On purusing the pages, we can't help but notice a few things. First, we don't know of many legitimate publications that would provide a link to Wikipedia for background information, never mind Metapedia which is the, "White Nationalist alternative to Wikipedia" (and yes, we know we use Wikipedia ourselves, but we're a fucking blog, not the "National Post"). The articles themselves are interesting as well, most of which promote racial intolerance and anti-Semitic views. And the authors! My oh my! The writer of the glowing Paulie article above is one M.P. Shiel. The only M.P. Shiel we're aware of, and he was a very good author, died in 1947.... and was of West Indian descent. Other experts who are quoted in various articles, such as Gideon Dene in the Paulie article, are not found in any other mainstream publication... or really anywhere else for that matter (Gideon Dene can be found being quoted in another "White Nationalist" website though, but it appears to be the only one).

In fact so far the writers all appear to be somewhat reticent about identifying themselves, though we have been able to find out about one who writes as, "H. Millard":

The CCC's Web site also regularly publishes racist material. One of the group's featured columnists, who identifies himself as H. Millard, recently wrote there on his view on the likely effects of immigration and intermarriage. Millard, who refused to be interviewed, is a Costa Mesa, Calif., real estate agent whose full name is Martin H. Millard.
"What will emerge will be just be a slimy brown mass of glop," Millard wrote.
Hmmm, a link to the Council of Conservative Citizens, a group mentioned in the Paulie article and one in which Paulie serves on the Board of Directors.

We even took a look a the domain registration. Let's compare the online version of the "American Mercury" with one that is considered to be a legitimate news publication and which has an online presence, like the "Globe and Mail"

For brevity, we won't post the entire domain registration. We would ask our readers to check it out here. Seems like everything is in order here.

Let's now compare the registration information for the "American Mercury" which is found here. You know, it just doesn't seem to pass the smell test here (we would also note that the website was created in 2008).
Now, we would hate to be cynical, but in the spirit of H.L. Mencken, we just can't help but think there's tomfoolery afoot here. It's almost as if an organization like, oh, we don't know.... let's say the Council of Conservative Citizens, have created a website and attempted to link it to a respected and celebrated journalist, knowing full well that this newly created online publication has as little to do with the original, Mencken-founded, "American Mercury" as would an organization we might create and call, "The Heritage Front" (we envision a website with lots of kittens and puppies wearing Canadian flag-print sweaters) would have with the original hate group.

But we don't want to be cynical. In fact if Paulie wants to sing the praises of H.L. Mencken, all power too him. He can start by commenting favourably on Mencken's support for the Jewish refugees fleeing Nazi Germany and his criticism of his own government for preventing the ship from allowing it's passengers to enter the United States:


There is only one way to help the fugitives, and that is to find places for them in a country in which they can really live. Why shouldn't the United States take in a couple hundred thousand of them, or even all of them?
We wonder if Mencken would have protested the entry of less than 500 Tamil refugees into Canada? We have no doubt how Paulie would have felt about Jews fleeing Germany prior to World War II.

At what point is Paulie going to stop embarrassing himself?

As for us, while we respect Mencken's influence on journalism, we would rather emulate another one instead: 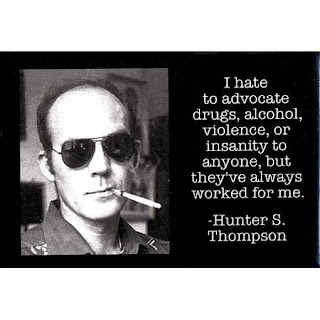 Oh, and fyi, Paulie's Facebook group (the one he claimed was growing so quickly) now has 155 members, or 14 more since we published our last article. And again, almost all originating in locations where the members wouldn't be able to vote for Paulie. Any bets on if he'll actually receive more than 150 votes in total?
Posted by Kurt Phillips at 22:31

Although I am little offended you didn't post my comment on y'all being the 'Nazi-paparazzi' I would have to admit this post was a lot more informative then most you have posted.

And quite possible its just because of Hunter.. so don't give yourself too much credit, yet.

This is one of the best articles you guys have ever put up. Congrats. Of course, the Carto-era Mercury is a joke. Old H.L. will either be turning in his grave or taking a pull off a flask and laughing his arse off, at where it's gone.

Hazel could out-perform Fromm in the Mississagua election even if she'd been declared legally dead two weeks before polling day.