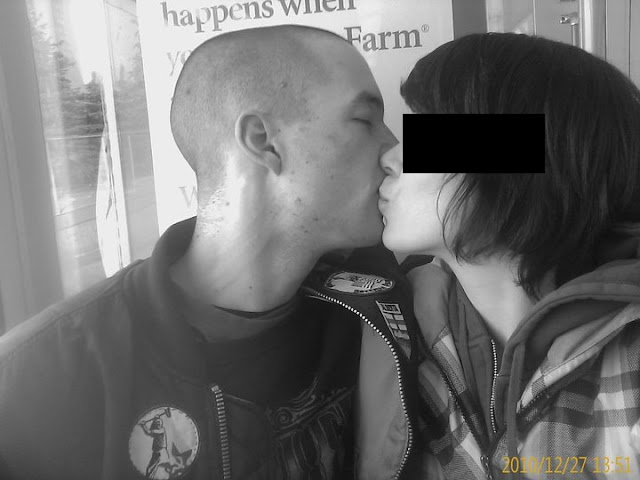 It's been a while since Paulie (seen here in one of the more flattering pictures that someone has been able to take of him) brought up his pet project. Remember Michelle Erstikaitis? The woman Paulie claims is being persecuted as a political prisoner because of a letter she wrote to Timothy McVeigh.... forgetting the numerous crimes she actually has committed, while glossing over the arson, the assault of a then boyfriend, calling the mother of one of Paul Bernardo's victims and threatening to kill the mother and her son?

We had figured the ridicule from Paulie's fellow travelers over his support for Erstikaitis might have wised him up that perhaps she wasn't worth the trouble. Turns out we had underestimated Paulie's masochistic nature:

As we enter the final days of 2010, we thought we would remind our dear readers (though most of our regulars need no reminding) of the fact that, "White Pride" and "White Nationalism" is really just a euphemism for justifying hatred and violence.

In early December one of the Canadian regulars on Stormfront posted a link concerning right wing extremism and violence in Moscow:

Now the appropriate WN script will pay lip service to this violence being regrettable, but also being symptomatic of deeper racial animus that could be solved merely through a, "sensible" immigration policy (failing to mention that the targets of the Russian ultranationalists are indigenous to the modern state of Russia, having been incorporated into the Empire between 1817 and 1864). And if it were David Duke, Don Black, Paul Fromm or any of the other elder statesmen of the WN movement who commented on the link, this, or a variation of this, is what we would read. Of course they don't believe this either, but it does sound so much more respectable.

Fortunately, the unwashed masses of the WN movement often forget protocol and actually say what they think:

We're a bit late here, but we thought this was way too bizarre to let pass:


City police spokeswoman Emma Poole said the worst injury was an apparent broken nose sustained by one of the victims, who was knocked to the ground and struck in the face.
Read more »
Posted by Kurt Phillips at 05:39 1 comment:

Happy Holidays and Special Thanks

The membership decided to take a few days off to spend with our families, but we did want to wish all of our readers happy holidays, especially Volksfront Alberta.

You see, Volksfront Alberta, specifically Jeff Demas, gave us a lovely gift a few days ago. A nice Christmas group picture from their recent blot (we hadn't realized that Paulie would be attending as well). And though the picture was eventually removed, we just wanted to assure Jeff that we managed to save his gift to us. It was very thoughtful.

We would also like to thank the rest of our readers for their support the vast amount of information that has been provided but which is not always published. While the Collective might be thought of as a tight core group of individuals, the reality is that our readers are what truly constitute the Collective.

With that we urges all our readers to spend the holidays with loved ones and truly appreciate the meaning of the season.

We'll be back very soon.

Since we wrote about the incident during the weekend in which an 18 year female was allegedly beaten by members and associates of the former Aryan Guard, (now calling themselves Blood & Honour) we've received numerous responses from our readers. Some have claimed the incident occurred as it was recounted to us. Others have written stating while something did happen, it might not have occurred as we described it. Still some have claimed the incident never took place in the first place while others have suggested that it did happen and the girl had it coming.

Some of these claims can also be found on one of Marleau's most recent Facebook update: 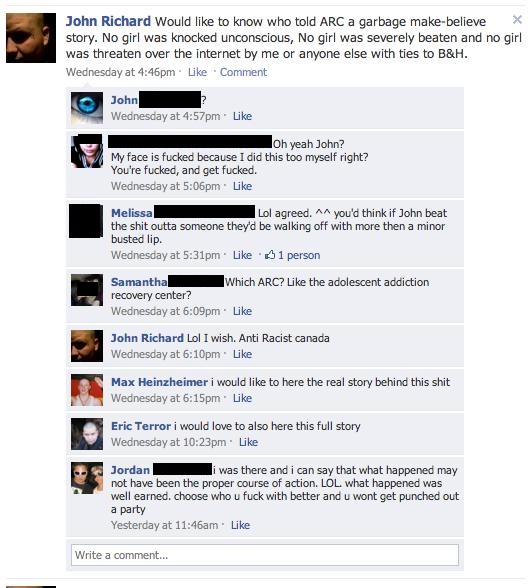 UPDATE: Would the person who contacted us about 15 or 20 minutes ago please contact us again. The email you provided didn't seem to work.

So, how did you, our dear readers, spend your weekend? If you're a member and/or associate of the former Aryan Guard (now renamed Blood & Honour) you may very well have spent it beating a 90lb teenage girl senseless at a house party. We received the following information concerning the event:

Lee and two other skinheads beat up a girl who is 90 lbs or less and who just turned 18. I'm trying to get more info on this story, but it happened on Saturday I believe or perhaps Yep, three guys on one girl.. and John is threatening the girl online through Facebook.

We received this followup shortly after:

We haven't been by Richard Warman's website for a while, but when we visited today we found the following:

Richard Warman is pleased to announce that he has resolved his libel action against the Cowichan Valley Citizen newspaper and Canwest Media. Thanks are due to mediator William Neville and counsel Danesh Rana and Robert Houston, QC of Burke Robertson LLP.

We're not sure when this occurred, but it must have been relatively recent.

Back on November 30 we and a number of mainstream media sources reported that Terry Tremaine had been found not guilty of contempt based primarily on the fact that the CHRT decision had not been filed at the Federal Court and that Tremaine had not been served with the registration order when the CHRC brought contempt charges against Tremaine. Now it looks as if that decision is being appealed: 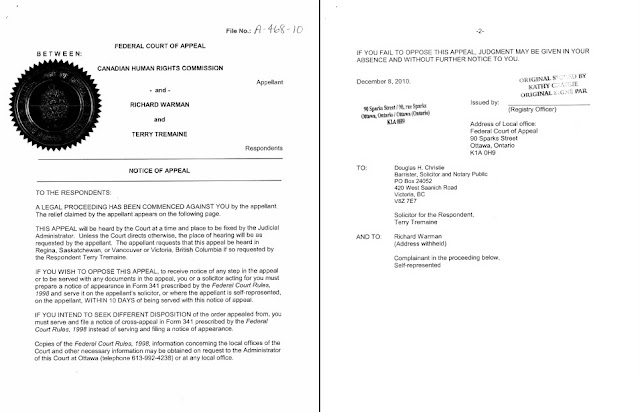 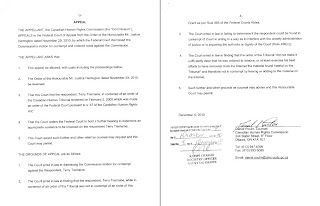 We're not sure how this will end, but we think there's a fairly decent chance that the original decision could be overturned. Or not. We'll see soon. Either way, this is an interesting development which will no doubt cause the usual suspects some consternation.

Posted by Kurt Phillips at 20:57 No comments:

We haven't been updating the blog as often as we have in the recent past, however that doesn't mean that we aren't active behind the scenes. In fact, we are currently engaged in two projects that are taking up a great deal of our time but which we hope to share soon.

The first is related to the movement in Calgary where the lion's share of this blogs attention is focused on. One of our readers requested that we provide a "who's who" in the Calgary White Nationalist movement, as there have been some changes and new faces have appeared. We have been compiling information on the movement in Calgary for some time, but we have yet to publish. In the future we hope to publish our results along with photos and profile descriptions, but in the meantime here is a partial list of the main players and their supporters (our readers will note some significant omissions, no doubt):