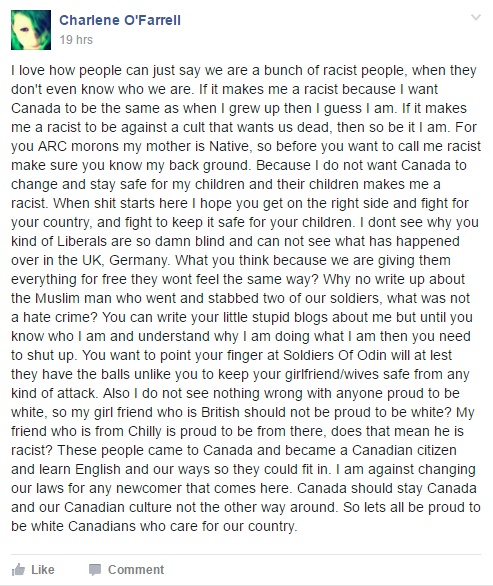 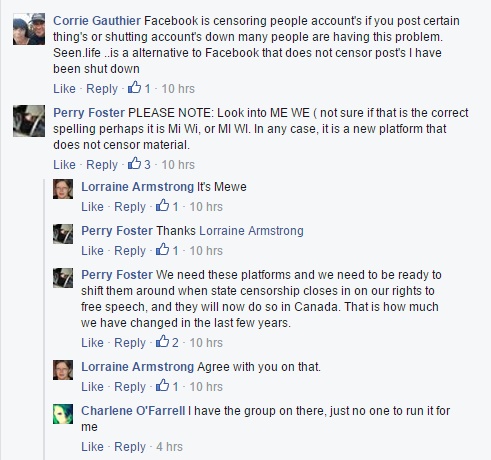 Soldiers of Odin: Canadians United 4 Canada Ally With Overt Neo-Nazis

On March 7, the founder of the Facebook group Canadians United 4 Canada posted the following message in which she offered her unreserved support for the Soldiers of Odin (SoO). 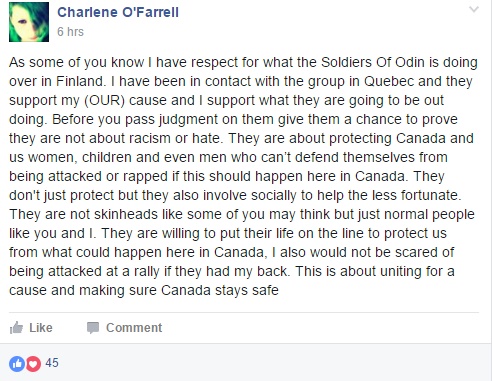 The Soldiers of Odin (SoO) began in Finland as a vigilante group ostensibly formed to protect women from sexual harassment and assault from the country's immigrant and minority population (which leaves us wondering if they are as concerned about harassment and assaults against women by the majority native European population, but we digress). Though they claim not to be racist, the founder of the SoO has links to the far-right Finish Resistance movement as well as a conviction for a racially motivated assault (my Finish to English translation captures the spirit of the article):


....Soldiers of Odin leader Mika Beach was convicted of assaulting immigrants in 2005. Beach and his friends attacked two immigrants in a restaurant. They beat both victims and his hand was broken, Journal says. Beach was also sentenced for other offenses, including possession of a gun and blade chain in a public place. The offence was racially motivated....

It is noted in the article that another high profile SoO member has and extensive criminal history. Also, some of the membership aren't above lying about their efforts:


The whole story was invented by one man Looper. We are now accused of being liars and just about. We ask all what you humbly apologize that this did happen.

Somehow we have a feeling that they regret getting caught lying rather than the actual lie, but what do we know?

Canadians United 4 Canada don't appear all that concerned with how shady the original Finnish chapter of SoO seems to be in offering unconditional support to the Canadian chapters. The Quebec chapter of the SoO seem to appreciate Ms. O'Farrell's shout-out: 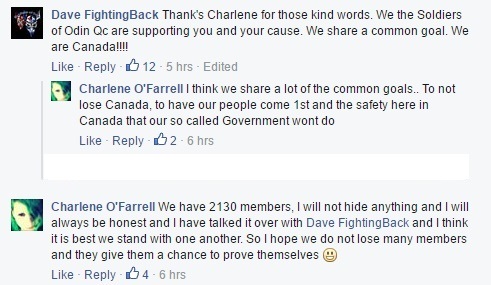 Ms. O'Farrell, founder of Canadians United 4 Canada, wishes to convince her members that the SoO are not racist skinheads and just want to protect Canada and all that we hold dear from the Jihadists at the gate (though she herself show poor judgement in who she adds as friends): 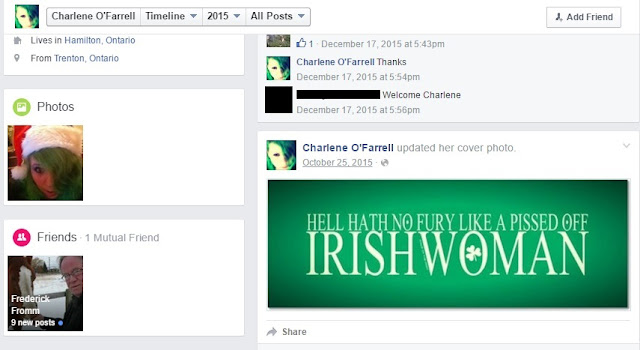 Though we focus on Canadian content primarily, we can't help but be both fascinated and horrified by the Donald Trump phenomenon. We are witnessing political rhetoric that would have found a comfortable home in Italy during the 1920s. I had always believed that while demagogues such as Trump have always existed, they would be marginalized in nations with strong, long lasting, democratic institutions (despite the inherent flaws in those institutions).

Seems that's not the case as Trump is likely on his way to become the standard bearer of one of the two major American political parties by offering a steady stream of xenophobia, hatred, nativism, ultra-nationalism, and violence. The result of this could mean the end of the Republican Party or, if elected, far worse.

The media, as well as some in his own party, have finally started to call him on his continual incitement to violence. Trump deflects by claiming to oppose violence (though he has both wistfully advocated its use as well as justifying when it occurs) while blaming his opponents of initiating the violent encounters. And his supporters bleat their agreement, claiming that Trump, and themselves, are really the victims of a cabal including MoveOn.org, George Soros, the other Republican presidential candidates, Hilary Clinton and Bernie Sanders, Muslims, the media, Black Lives Matter, and the Black Panthers.

So when this "story" was published online yesterday, the Trump supporters were all over it like a fat kid on a smartie: 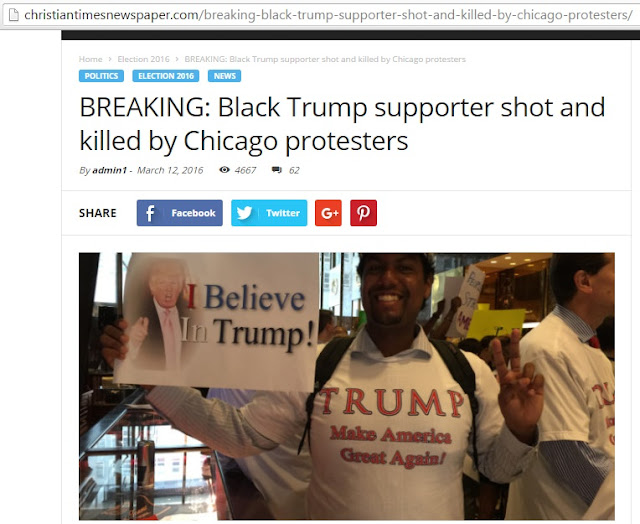 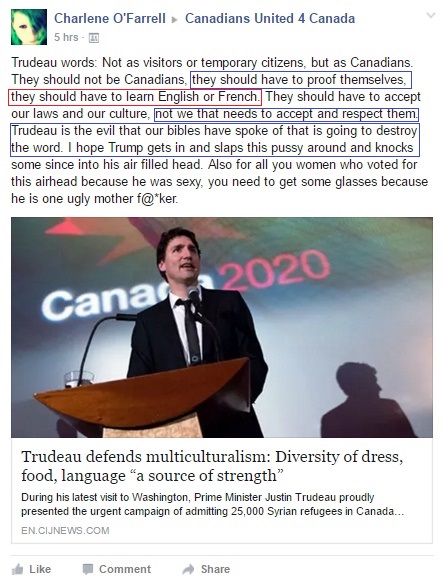 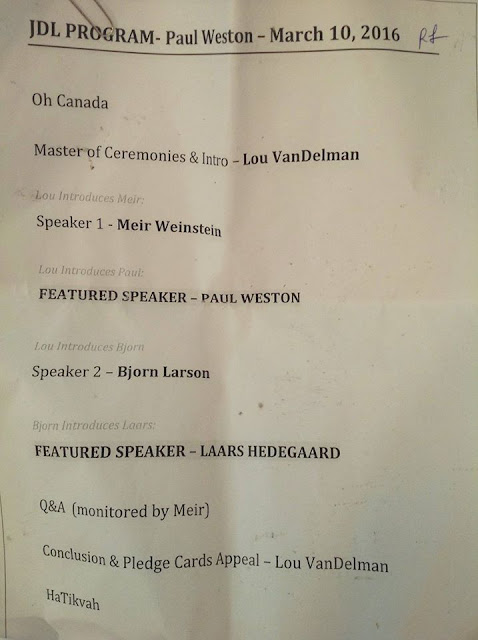 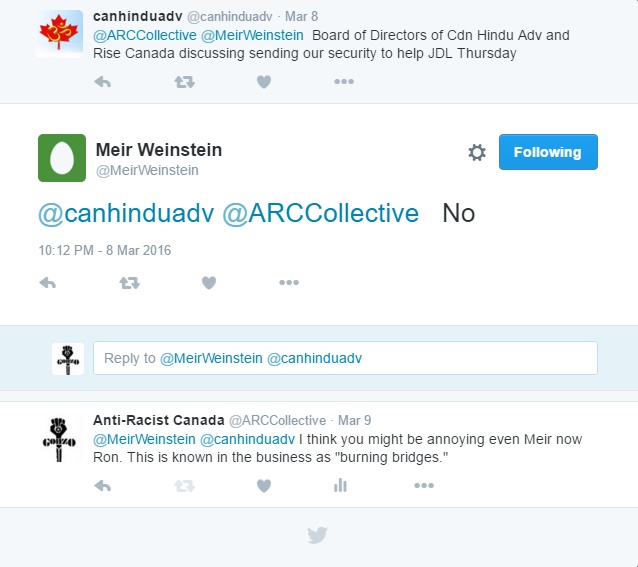 The event did take place though and Banerjee did attend, as did it seems at least a few members of PEGIDA Canada:
Read more »
Posted by Nosferatu200 at 14:02 2 comments: 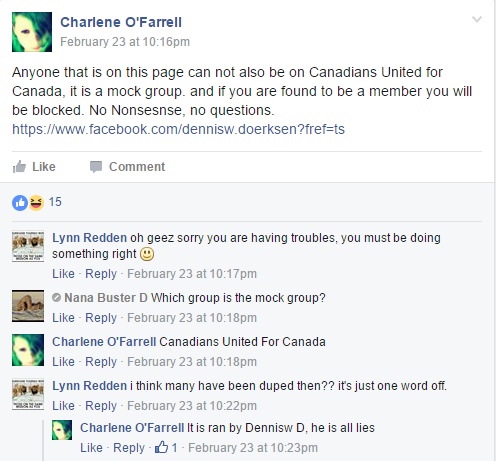 We sometimes like to amuse ourselves.
Read more »
Posted by Nosferatu200 at 16:52 No comments: 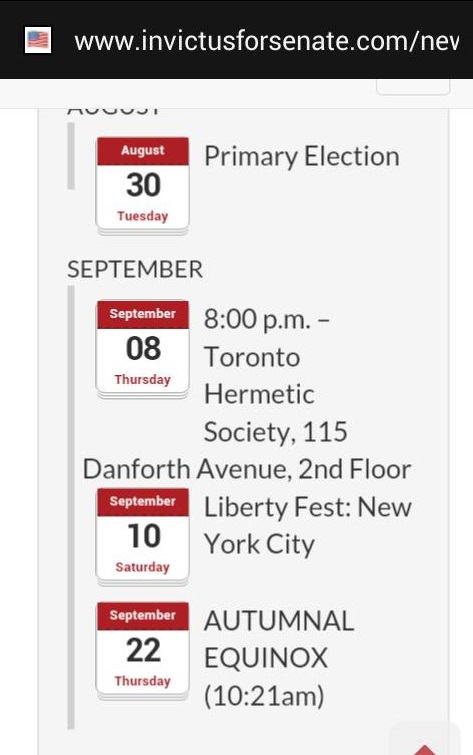 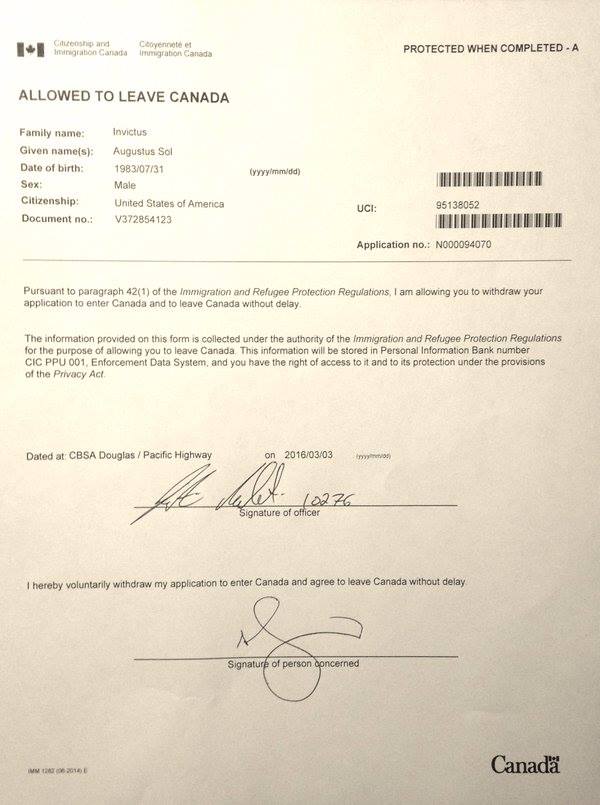 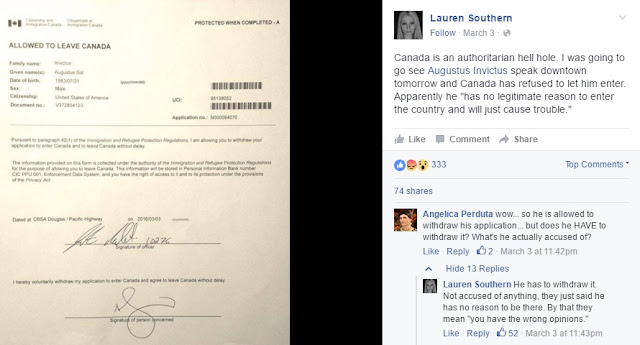 At least Paulie may now have someone to commiserate with.

On Saturday we posted an article which included information regarding a PEGIDA UK event organized by the JDL. At this event the leader of PEGIDA UK, Paul Weston, would be speaking.

Looks like there's another welcome committee being formed, though one decidedly not sanctioned by the JDL and unlikely to be particularly welcoming to Mr. Weston:

On Thursday March 10, the extremist Jewish Defence League will be hosting British fascist Paul Weston at a meeting at 788 Marlee Avenue - around the corner from Lawrence West subway station. Weston will be attacking Syrian refugees as a "threat" and opposing immigration generally. Weston is a notorious fascist, and conspiracy theorist whose articles mass murderer Anders Behring Breivik cited in his manifesto. Weston is the former chairman of the British Freedom Party, a splinter group founded by former member of the neofascist British National Party and is active with the racist English Defence League.

Come out to protest this meeting and make it clear that fascists are not welcome in Toronto. Bring banners, signs, noisemakers, and friends. 788 Marlee Avenue is the Toronto Zionist Centre and is around the corner from Lawrence West subway station - when leaving the subway go one block west on Lawrence and then turn left on to Marlee.