Condemned 84 and the Embrace of Racist Ideology

You know, rather than reinvent the wheel, we invite our readers to check out the story at this link. As a bit of a preview....

The main support for Condemned 84 on the show that’s been announced for Toronto is Légitime Violence, an ultra-nationalist RAC band connected with the right wing skinhead crews, Quebec Stompers (Quebec City) and Coup de Masse (Montreal). LV are venomously anti-left wing (hippies and other soft targets only, please), while at the same time cowering behind the ‘apolitical’ label. The band’s imagery displays an obsession with portraying steroid junked-up skinheads preying on the smallest and weakest of the stereotypical ‘left-wing activist’. Proudly sporting “anti-antifa” t-shirts all over Facebook (anti-antifa means anti-anti-fascist, and is a slogan/psuedo-movement started by neo-nazis in Europe), they’ve been fairly open about their political leanings. Arguably, their hatred of anti-fascists is somewhat justified. Quebec Stompers and Coup de Masse has been kicked around a fair bit by anti-fascists, although evidently, not hard enough.
Posted by Nosferatu200 at 00:06 No comments:

Suffice it to say, Rob Ford has not had a pleasant week. Two weeks almost. In fact we dare say that the past two weeks has fucking sucked. And things really don't really look to be improving any time soon.

But on this, Rob Ford's birthday, at least one person wants to show him some love: 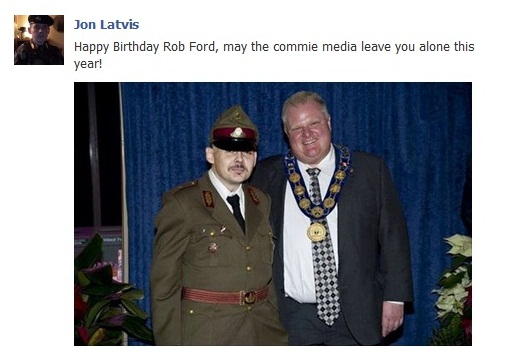 Sure, we're piling on a bit. As one of our friends noted, it really isn't fair to criticize Ford for having his picture taken with Latvis as it was a public event with hundreds of people in attendance. And there is no reason for Ford to know who the hell Latvis was in the first place and when he made a public statement to that effect while also condemning antisemitism we have to take him at his word. In fact when we first published the photo, we noted it was more a failure of Ford's staff for not noticing the guy in the weird looking neo-Nazi outfit, asking a few questions, and then discretely pulling him out of line and ushering him out the building.

But damn. When it rains, it absolutely pours.

It recently appeared on "The Daily Show" earlier this week. This is Toronto mayor Rob Ford with Jon Latvis, founding member of the racist band RaHoWa with ties to the Heritage Front, Creativity Movement, and violent racists. We found this photo and sent it to Warren Kinsella by way of a friend, and long story short, it created a bit of a minor scandal. Latvis himself claimed he was not racist and in fact had been fooled by RaHoWa. He further threatened to sue (including a direct message) Kinsella, however Latvis seemed unaware of how the Internet actually worked and that he had left a very long record of his active and enthusiastic involvement with organized racism. And to his friends who might have been concerned about his public rejection of racism and antisemitism, he offered this as an explanation:


At the time ARC suggested that this incident was just yet another in on a long, long, list of poor judgement calls made by Ford and his team and that he was likely not sympathetic to National Socialism. We generally still believe this to be true, though given other statements he might generously be considered to be rather bigoted. However, as a result of the current scandal (and you would have to be living under a rock to not know what we are referring to) we've learned that at least some of his immediate family were active to a degree in the racist movement in Canada. The relevant section in a "Globe & Mail" article alleging the some members of the Ford family have had a long history of being involved in the drug trade details Rob Ford's sister's involvement with members of the KKK and Heritage Front:

I remember the first rodeo I attended in Manitoba growing up, though I apparently had attended others when I was younger that I can't recall now. I was six years old and two events are retained in my memory. The first was the calf roping competition. I remember my mother consoling me as I cried because the baby cows were being hurt. The second was one of the rides. Instead of a Merry-Go-Round, this rodeo had real ponies. I remember how disinterested the person running the ride looked as he did his job of leading the tired (and if memory serves somewhat emaciated) ponies around in a circle. One of the ponies stopped and the guy hit it with a leather strap to get it going again hard enough that it actually started to bleed. My mother took my off the pony, screamed bloody murder at the guy abusing the ponies, and we promptly left the rodeo grounds.

While that was the first rodeo I attended that I can remember, it was also my last.

So when this story was sent to us, I couldn't help but remember my own rodeo experience and admire those who protest the abuse, knowing full well that they may very well be subject to abuse themselves:


METRO VANCOUVER -- Surrey RCMP is investigating an alleged assault against an animal rights protestor Saturday near the Cloverdale Rodeo.

Corp. Bert Paquet said Tuesday the woman injured in the altercation was allegedly dragged to the ground and punched and kicked by two or three people, after protesting about cruelty to animals at the rodeo.
Read more »
Posted by Nosferatu200 at 21:25 1 comment:

Fromm Amps Up The "Yuck" Factor

Only Paul Fromm could make a statutory holiday seem smarmy: 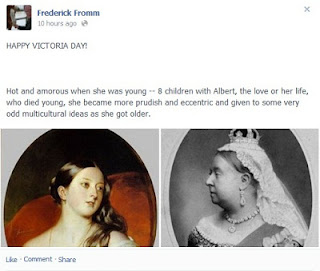 Not that we have much love for this particular imperialist icon, but we're sure Vicky would not be amused. Neither would John Brown who is rumored to have been well antiquated with Victoria's freaky side.

She let him see her ankle. Once.

Then again, Fromm and Gerard Bechard, two men known for their popularity with the ladies, did find a statement made by the long dead monarch with which they could both agree.

Wow. And you say that "White Nationalists" have a hard time attracting women to the movement? Even when you could have all of this?

Yeah. You know you want some.

Something we've noted over the course of this blog's history is the increasing tendency of Paul Fromm (whom we lovingly refer to as Paulie) to move away from the, "genteel bigotry" he had been noted for advocating publicly in the past. He would couch his racism in euphemisms such as immigration reform and free speech advocate. Increasingly over the years his racist positions have manifested as more extreme and vulgar. This can be illustrated by some of his more recent posts on Facebook, from what tickles his funny bone....

As BCL has noted, Students Against Israeli Apartheid was stripped of it's status as an approved club at York University, though the reason seems more due to the disruptions caused by the group rather than the massage. Or it may be a convenient pretext. Who knows?

That said, and although we have our own significant concerns about the treatment of Palestinians by the Israeli authorities in the West Bank and Gaza, this writer notes that the Israeli Apartheid groups seem to stray from legitimate and often well deserved criticism towards much darker territory which, despite the criticism I might receive for suggesting this, is anti-Semitic in nature. This isn't to say everyone, or even most, who support this movement hold anti-Semitic views, but the more this writer looks at the ideology of some of the key figures, the more this writer draws this as a conclusion.

Based on recent contacts during the past few month we had a feeling that this would be happening eventually. We knew that the local media in Fort McMurray had become aware of Love and his campaign of
harassment, which evidently now includes a child raising money for a charity.

Brad Love was arrested and charged with mailing obscene materials and for making harassing phone calls. Love was a focus of one of our recent blog posts.

McKee Given 13 Months... And Then Released

Or at least that is the plan.

Four weapons violations between 2006 and 2011, including possessing bomb making materials. Convicted of uttering threats. Fleeing from police while on the run as a result of attempted murder charges. Numerous other stints behind bars for a variety of reasons.

Is it any wonder why boneheads like McKee don't take the law particularly seriously?

You know, we might just be starting to lose our faith in the Canadian judicial system at this point.


EDMONTON - The Calgary-based leader of the white supremacist group Blood and Honour group received a 13-month sentence Monday for possession of a shotgun while subject to four court-ordered weapon prohibitions.

Court heard McKee and several friends came to Edmonton from Calgary to attend a rally in March 2012. During that event, members of Blood and Honour and anti-racism protesters briefly clashed downtown.

Last week we received a message from someone proporting to be Michell Erstikaitis. As the message is chock full of da krazy, we are going to assume that it is indeed her.

The following was originally sent to a friend, but as it wasn't published there and because Michelle really wants the attention, she sent it to us as well, though slightly edited.

Talk About the Company He Keeps: Part VI

Okay, this is hardly a new revelation, but given some of Paulie's friends have said they have never heard him say anything racist and that there is nothing wrong with him, we like to remind everyone what kind of fella he really is.

The genesis of this brief article was the result of stumbling across this:


no telling what holocaust de-nier Paul Fromm will say when no one’s looking. We were finally able to get a video of his speech to the American Friends of the British National Party last March in Falls Church, Virginia.


Meet Eric Sheridan. He and his Mini Me are members of Max Hynes' Southern Ontario Skinheads, a group Max has claimed isn't violent.

Wait. No, this isn't a really good photo. Let's try this one.


Better, but one really can't see his sloping brow ridge and the permanent expression of befuddlement all that well.


Well, we suppose this will have to do.

Anyways, as Eric is a regular reader of our blog, we figure we would grant him a request. It seems he did something recently for which he is quite proud: