When we last wrote about PEGIDA Canada, it was in relation to their reaction to the mass shooting that took place in Orlando. In a post discussing the tragedy, they implicated the Quran in the murders as an example of hate speech against LGBTQ. One individual, who along with others had joined the group to challenge PEGIDA Canada's bigotry, noted that the Christian Bible also contained verses that would be considered objectionable. PEGIDA Canada's response was telling in that it indicated that they didn't even know the basic tenants of their own faith, much less Islam which they claim expert knowledge of:

Even if this were true (and it isn't), the PEGIDA Canada Facebook administrator doesn't appear to realize that he or she is throwing Jews under the bus since the Torah is comprised of what Christians regard as the first five books of the Old Testament. But then, like Christians and Muslims, most Jews don't follow every single tenant of their faith either.

We should note that PEGIDA Canada later seems to have removed this thread on their page as well as kicking off those individuals who joined to challenge them. Had such a purge have occurred to PEGIDA Canada members and supporters on another Facebook page, no doubt they would be crying, "censorship!" proving that they don't understand that word as well. Since it is their site, they are free to have whomever they wish participating, just as they banned this writer when she provided evidence that active neo-Nazis were members; the neo-Nazis are still members in good standing.

One part of PEGIDA Canada's response we really failed to address though was this second part:

Secondly ,[sic]what do you consider exactly hate speech in our posts .[sic]

How about this one as a first example?

This was one of several PEGIDA Canada posts we took screenshots of that were related to the Syrian refugee crisis. And though Ron Baker wasn't referring to specific individuals when he called for the genocide of people based on their religion (where have we heard that call being made again?), we think it would be appropriate to put a human face on those he would like to murder: 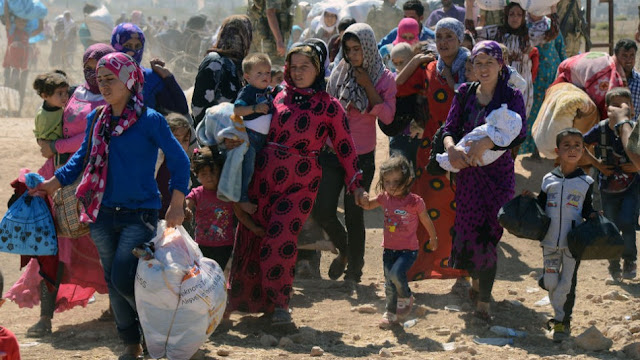 It's very easy to call for the death of other human beings on line or in response to a news article. It might be harder when you put a face to those people: 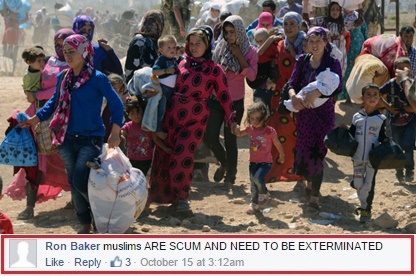 Now having collected these screenshots, we decided to do just that. We would put faces to the people whom PEGIDA Canada members and supporters dehumanize and who's deaths they seem to eagerly desire: 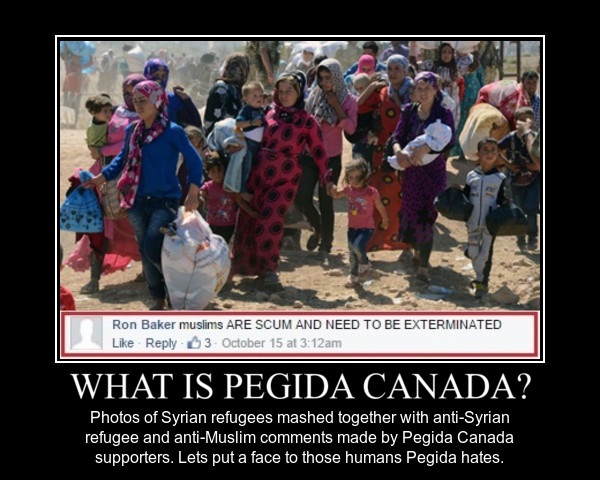 What now follows is a little art project we decided to engage in combining the hate rhetoric of PEGIDA Canada supporters with the targets of their hatred: 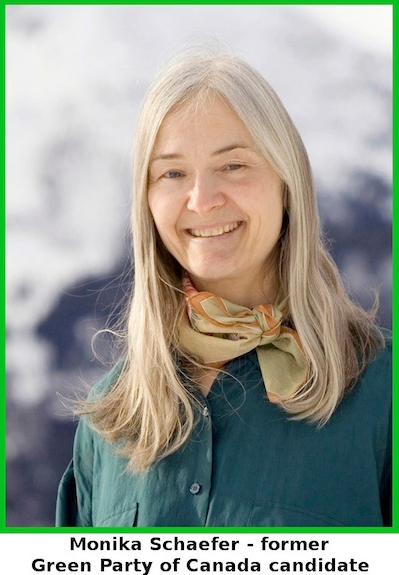 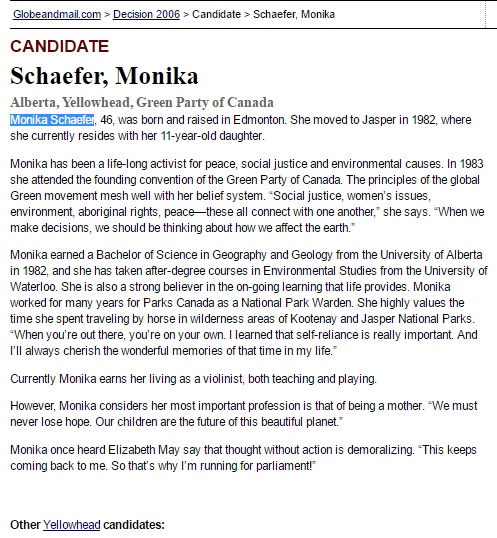 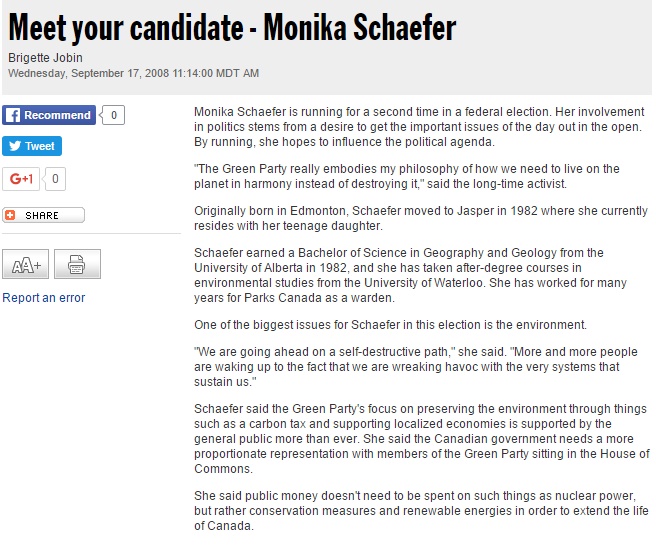 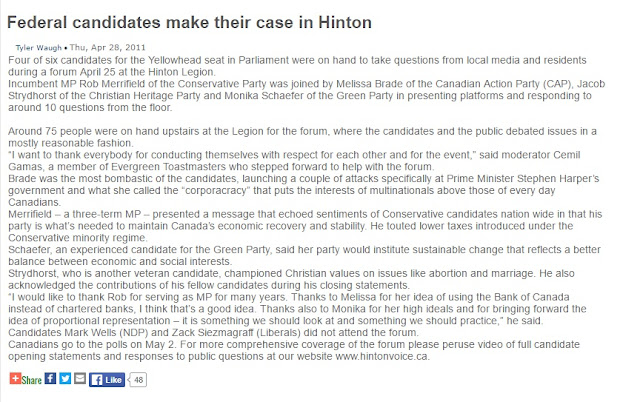 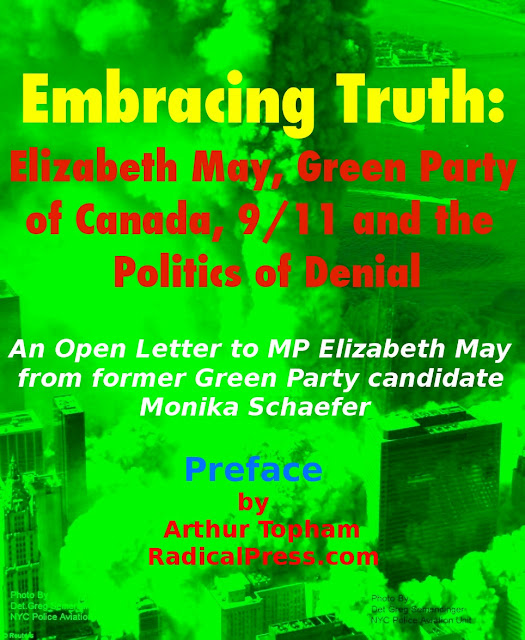 Blast From The Past: Former Manitoba KKK Leader Murdered

We were recently notified that a man by the name of James Edsel Tucker was found dead in an apartment near the University of Winnipeg:

A suspect has been charged in the stabbing death of 45-year-old James Edsel Tucker on Thursday.

Tucker was discovered in a suite in the 400 block of Furby Street. He was rushed to hospital in critical condition.

The nature and number of other charges were not made public.

Tucker was stabbed in the upper body and sent to hospital in critical condition where he later died....

While "James Edsel" might not be familiar to our readers as he changed his name some years ago, our readers will perhaps be more familiar with the name he was born with and which he made infamous:

William (Bill) Harcus was the Grand Dragon of the Manitoba KKK, operating in Winnipeg and Gimli. He ran a 25-hour phone hotline disseminating hate propaganda which was eventually shut down. He, along with Joseph Lockhart and Theron Skryba were later prosecuted with inciting racial hatred and genocide, though the charges were stayed upon the revelation that the police officer based her testimony not on her own memory but on police wiretaps. Still, the infiltration by the Winnipeg police into the group resulted in its collapse.

Though Harcus soon disappeared, he was still a figure of some degree of reverence in the Canadian racist movement even 20 years later:

Suspect in Attack on Muslim Woman in London, ON Arrested

In our previous post we had mentioned that, at least at the time of publication, there had not yet been mention of the assault on a Muslim woman in London, Ontario on any of the usual sites we frequent. However we completely forgot about one and, sure enough.... III% Canada is a quasi-militia movement in Canada ideologically aligned with the American-based movement. And part of that ideological alignment is virulent Islamophobia as evidenced by the reaction of III% Canada members to the assault: 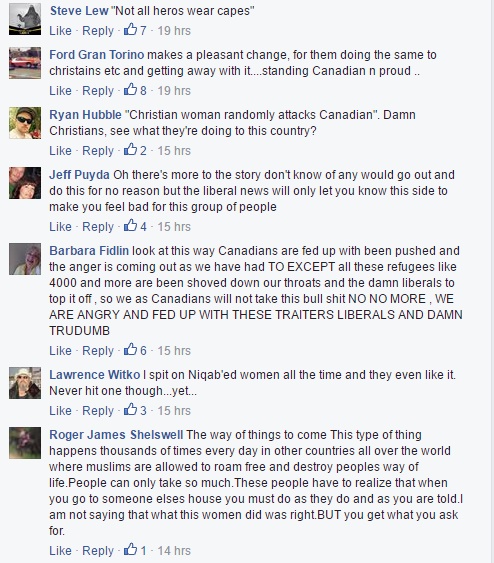 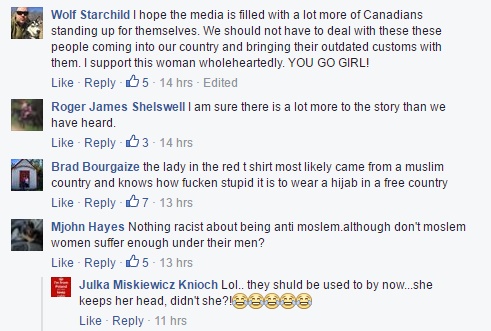 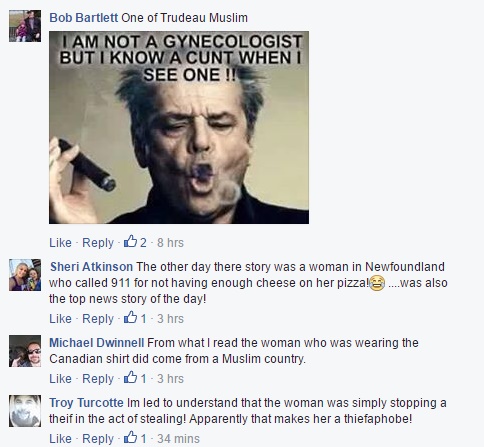 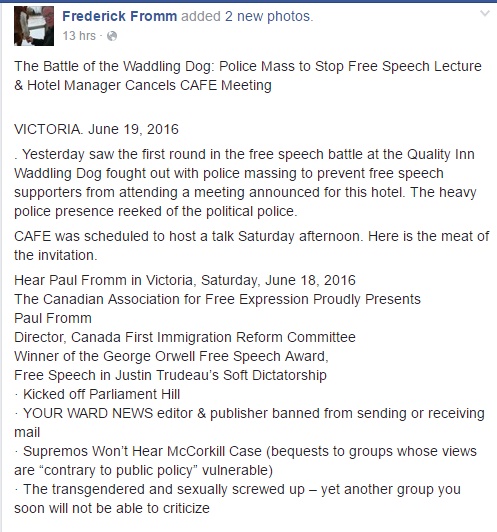 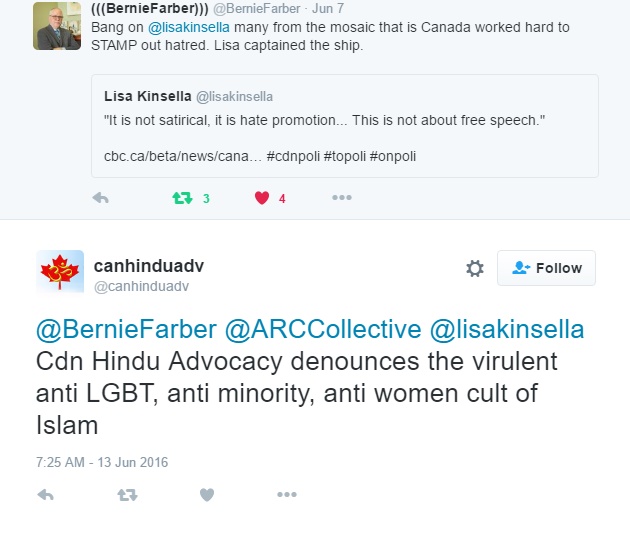 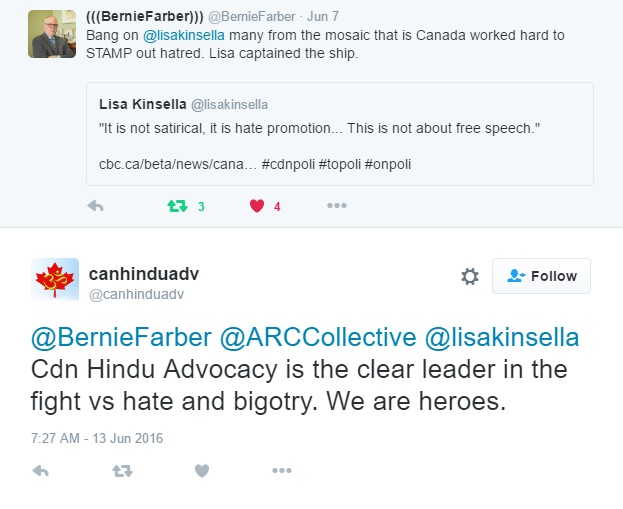 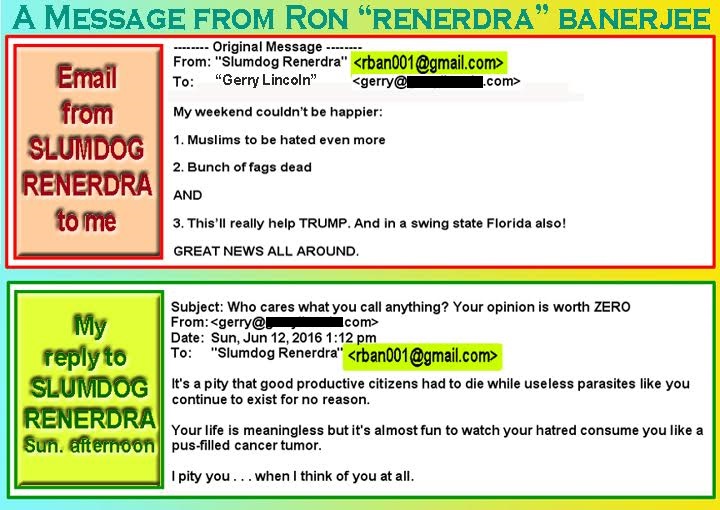 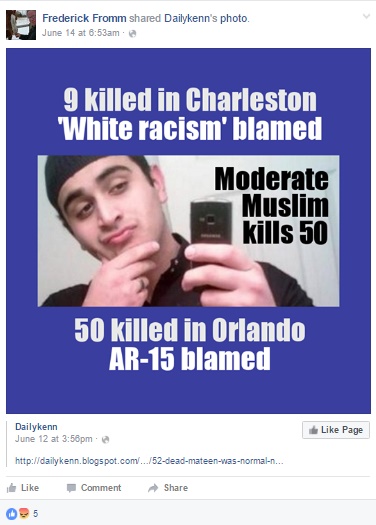 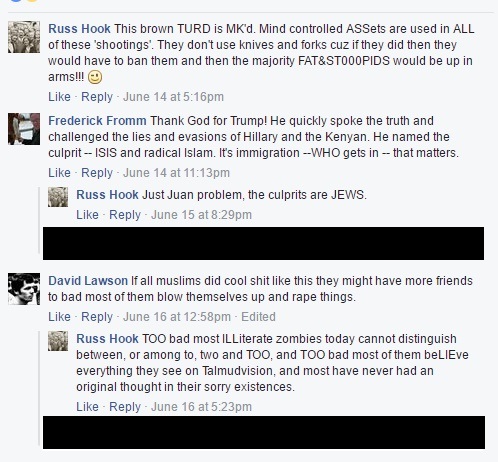 "YWN" Writer Can Dish It Out, But Can't Take It

A few days ago we posted an article noting the decision by Judy Foote which ordered Canada Post to stop delivering the neo-Nazi rag "Your Ward News." Now, we would further note that the order doesn't preclude editor James Sears from publishing the rag online or finding other means to distribute the paper door to door. In fact, a message on Paulie's wall posted by Southern Ontario Skinhead member Dan Hall suggests that Sears may be looking to employ neo-Nazis just for that purpose: 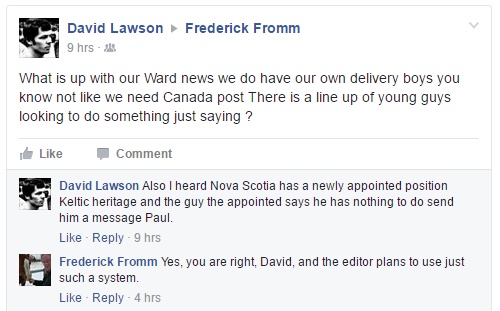 Of course, that hasn't stopoed Lawrence McCurry from engaging in a little bit of online histrionic crying and gnashing of teeth:

Then again, McCurry's freedom of speech/freedom of the press bona fides might be called into question when the rag he writes for has been promoting book burning for more than a year now: The Collective sent a message to Mr. McCurry in which we succinctly stated that "Your Ward News" wasn't being censored by the government, but that the government also has no obligation to disseminate trash on Sears' and co.'s behalf: 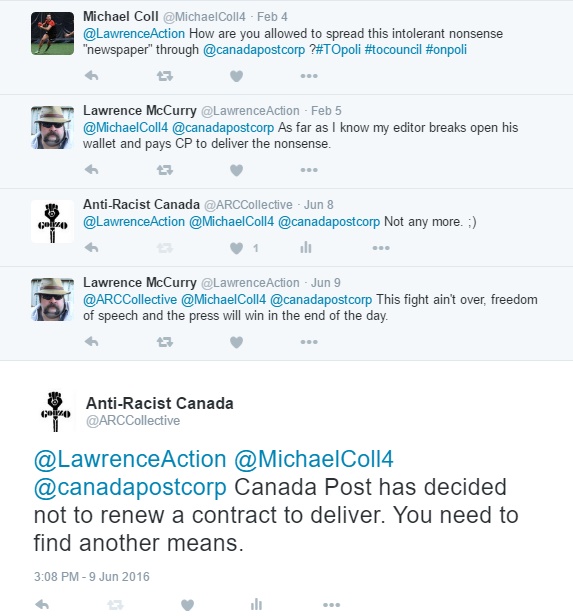 Yesterday we were reminded that the Supreme Court was set to rule on an appeal of the McCorkill case. Paulie, who is an interested party, seemed hopeful: 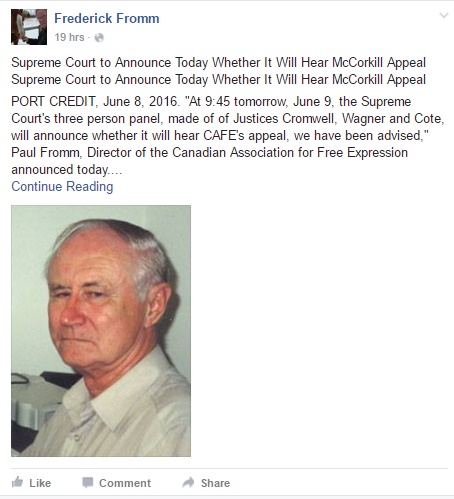 We would post the rest of the message (which includes the now predictable appeal for donations because.... Paulie), but we'll spare you the details.

Suffice it to say now, Paulie is going to be posting another, more despondent, message soon enough:

The Supreme Court on Thursday upheld a lower court decision to stop the execution of a New Brunswick man’s will that bequeathed his estate to U.S. white supremacists.

The Court declined to hear the appeal against a previous provincial court ruling, which was brought by the Canadian Association for Free Expression. It did not give a reason for the decision, in accordance with its usual practice.

Freedom to give away one’s property has sometimes been limited in Canada, where courts have been known to quash wills that they decide go against public policy.
....
McCorkill bequeathed his estate to the National Alliance, a white-supremacist group based in West Virginia.

Thanks in large part to the efforts of both Warren Kinsella (and those he marshaled in the effort) and Richard Warman, the neo-Nazi rag "Your Ward News" is going to have to find another means of distribution:

The federal government has ordered Canada Post to stop delivering Your Ward News, a low-budget, free newspaper that has offended homeowners in Toronto's east end and beyond.

The newspaper, which is the brainchild of editor-in-chief James Sears, has been labelled anti-Semitic and pro-Nazi by several groups who have campaigned for years to get Canada Post to cease distributing it.

They got their wish Monday when the minister responsible for Canada Post, Judy Foote, issued what's known as a prohibitory order against the future delivery of the paper.

A group called Standing Together Against Mailing Prejudice (STAMP) hailed the decision Monday in a news release.

"We are ecstatic about the minister's decision," said Lisa Kinsella, managing partner of The Daisy Group and one of the founding members of STAMP....

In the CBC article, James Sears doesn't seem too concerned, a sentiment echoed on his Twitter feed:

Reporter? No, that doesn't work. 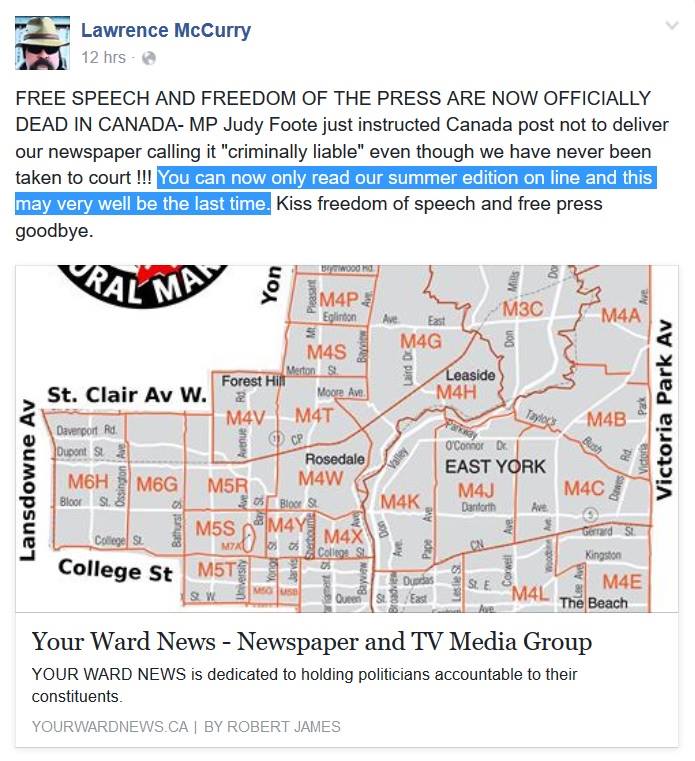 By the way, is it just me, or does McCurry look a little like character Max Eckhardt, the corrupt cop from 1989's "Batman"?

You know, if Max Eckhardt had let himself go:

Not to be outdone by McCurry's histrionics, we present Paulie's missives: 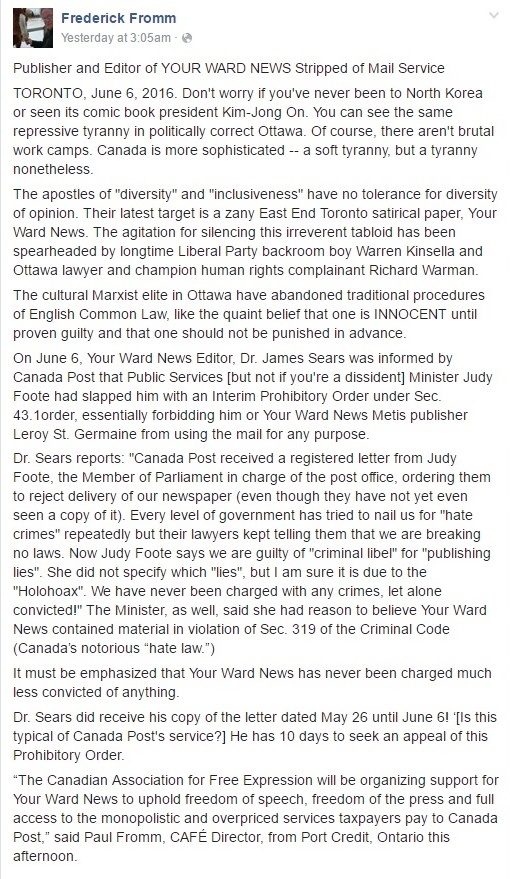