Michele Tittler Being Arraigned on July 9 Charged With Three Counts

When the Idle No More movement began, a number of First Nations activists were able to achieve considerable success in using the media to get their message out to the general public. While there were many, including this blog, who supported these efforts, they also resulted in hostility from those who would rather that First Nations peoples stay quiet about the systemic racism they have been subjected to for since before the founding of Canada as the nation it is today.

One of those individuals was Michele Tittler. 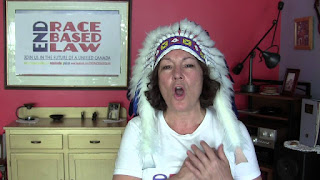 In 2014 a young woman from Regina wore a hoodie to school with the message, "Got Land? Thank an Indian" to highlight, among other things, the damage to First Nations culture as a result of European colonization and the appropriation of land by the colonizers. The young woman, 13 at the time, was attacked on social media and one of the worst of the bunch was a then 52 year old Michele Tittler who claimed to be the head of a non-profit organization called End Race-Based Laws. Initially CBC treated Ms. Tittler as an ordinary person who had concerns about the shirt, it soon became apparent that she was a rather infamous troll: 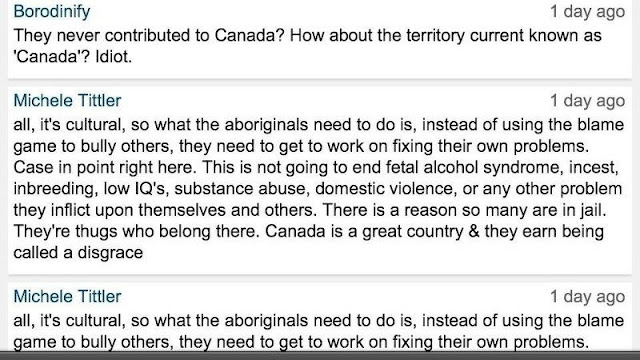 Aggressive online trolling by Michele Tittler, a Vancouver woman who posts inflammatory comments about Aboriginal issues and people, has led to at least two police probes — although the most recent case has been halted according to RCMP.
....
Tittler leapt onto the teen's page to denounce the message of the sweatshirt. In an interview with CBC News, Tittler admits to posting harsh, race-based comments on the teenager's Facebook page, considered a form of trolling. None of her words included physical threats.
....
In September 2013, Tittler registered a not-for-profit organization with Industry Canada called ERBL Inc., or End Race Based Law Inc. Its Facebook page has 3,100 likes. In an interview with CBC, Tittler explained that she is unemployed and spends most of her time on-line denouncing Aboriginal treaties, posting rants on YouTube and engaging in caustic debates with vocal critics. She's registered several domain names containing the words "Idle No More" to intercept web traffic from the actual site of the group. She has also filed formal complaints against people to Facebook and internet providers alleging that some sites are promoting racism.

"It got to the point that my hair was falling out of my head," Tittler told CBC News about the energy she has expended. "[I] was going to sleep for a few hours, then waking up and reporting [people]. Then I'd go to sleep for a few hours, then I'd wake up and report. My whole 2013 life was reporting."
....
"I'm probably the most stalked person on the Internet today in Canada," Tittler said, noting it was a point of pride that she had attracted such attention.

Tittler's family, however, has asked her to shut down her website. After the most recent controversy erupted, Tittler's 81-year old father, Konrad, discovered that his daughter had used his credit card to register more than 100 domain names in his name. He said he received an abusive phone call at five o'clock in the morning from someone accusing him of being a white supremacist.

"It’s astounding," Konrad Tittler told CBC News. "It’s foreign to me completely."
On the weekend, the senior Tittler contacted www.domain.com to try and shut the websites down. He learned that his daughter had pre-paid for the domain names, and, in some cases, they won't expire until 2023.

Ms. Tittler was not happy with the CBC coverage and began targeting them as well.

Point of fact is that ARC has been aware of Ms. Tittler for some time, however given that one of her prime motives for trolling is to get attention, ARC opted not to say much about her other than posting a screen shot and a response to her claims about First Nations peoples:

However it is hard not to notice posts by Tittler who currently has at least four Facebook and two Twitter accounts. While she has continued to attack First Nations peoples, her focus has expanded to include disseminating conspiracy theories and targeting Muslims, the media, Roman Catholics, and "the left" in general as for her vitriol.

She's also, not surprisingly, a Trump fan who is especially fond of Laura Loomer.

Here are just a few of her posts on one of the Twitter accounts she uses over the course of two days: 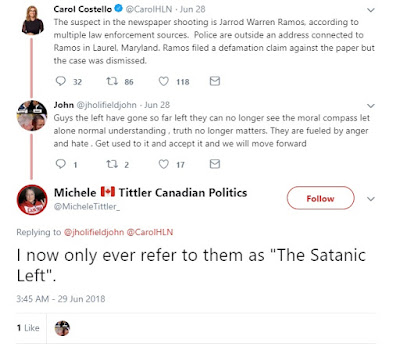 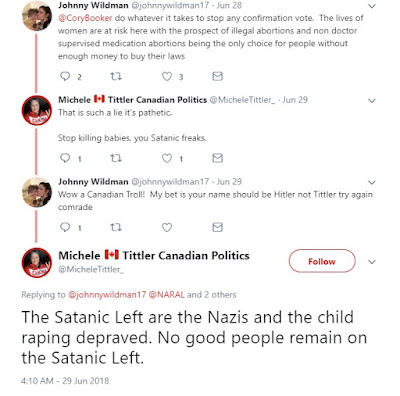 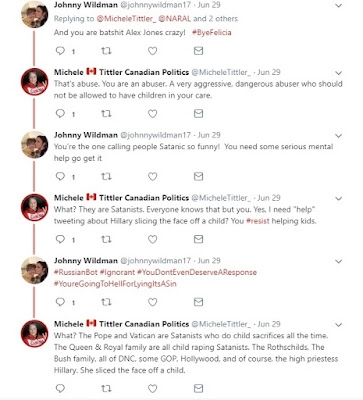 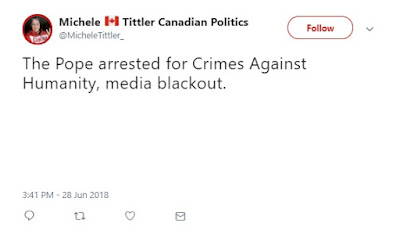 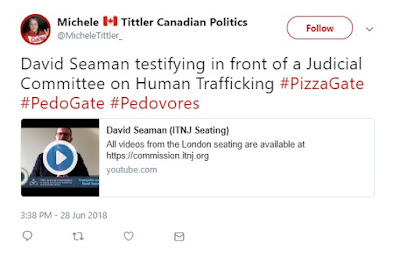 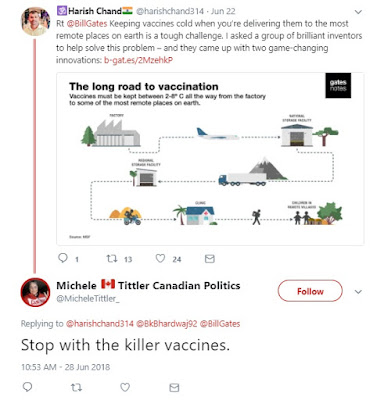 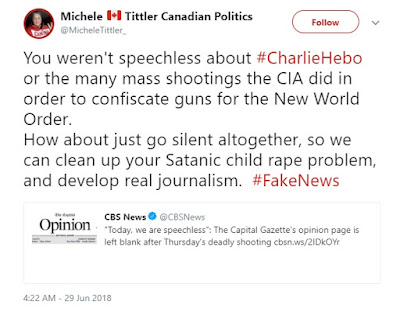 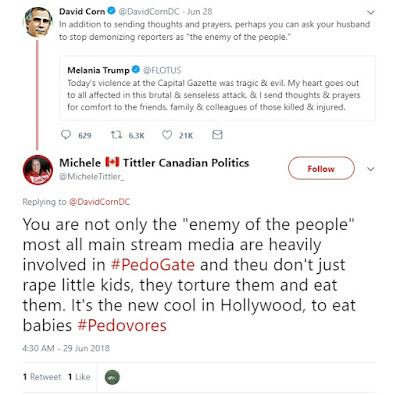 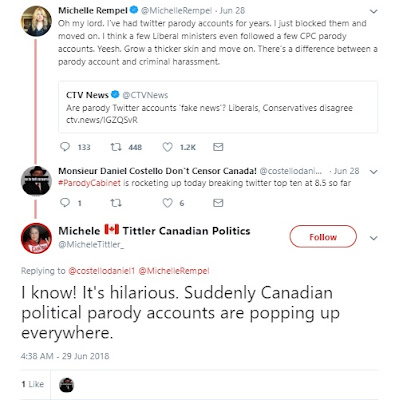 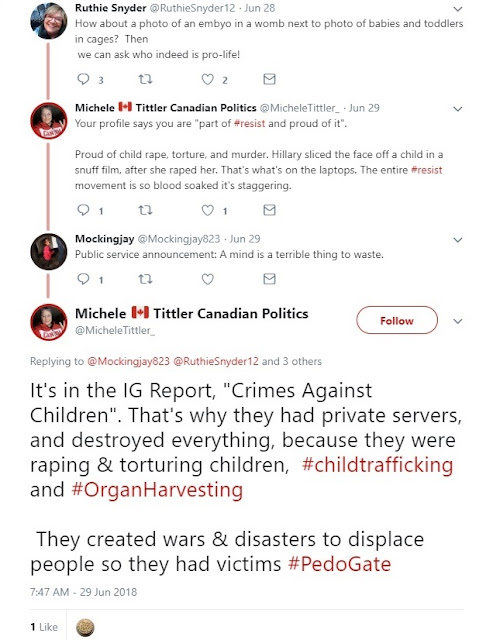 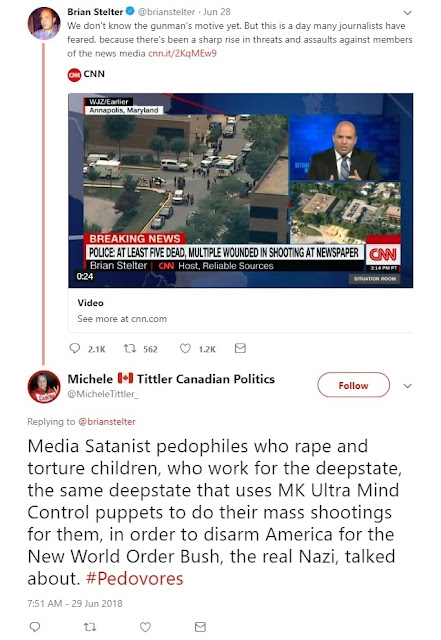 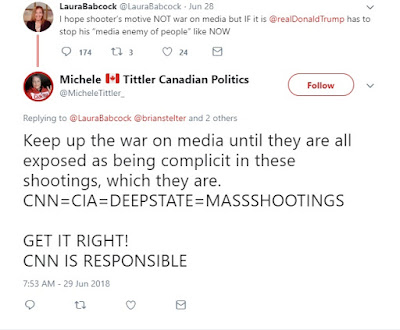 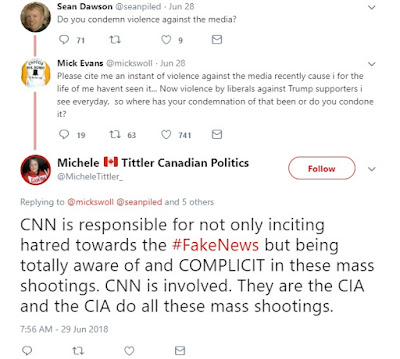 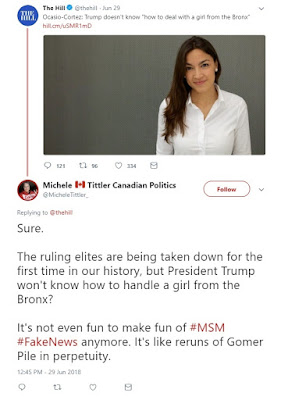 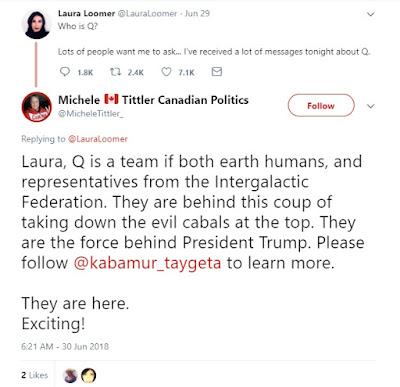 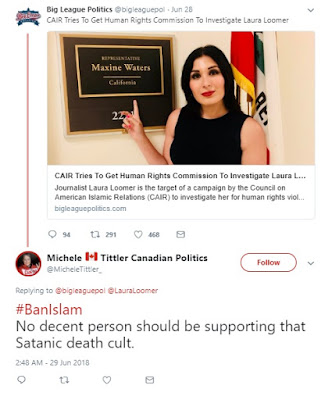 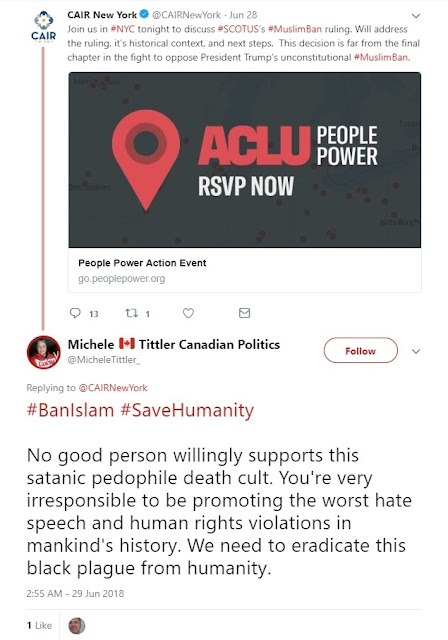 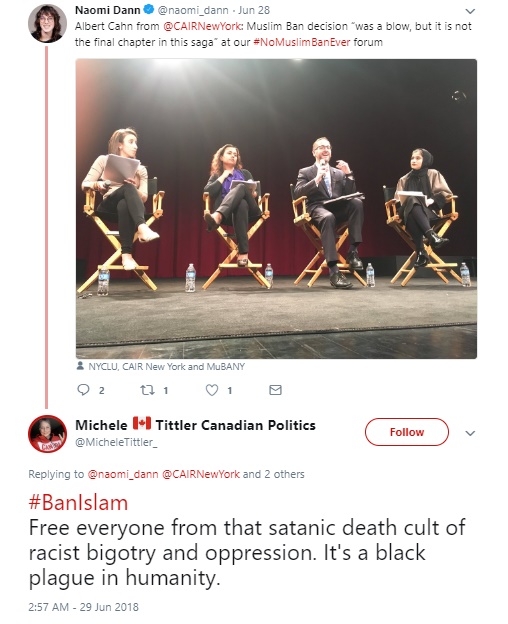 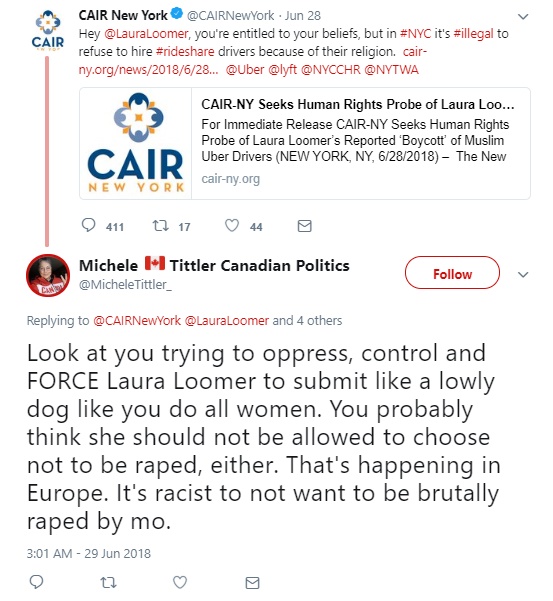 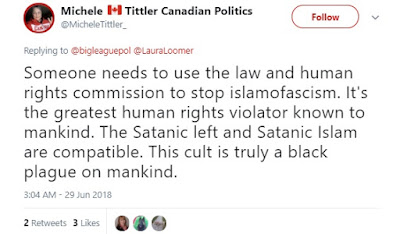 It is at this point that I should bring up one other point mentioned in the second CBC story:


Meanwhile, CBC's ongoing examination of the woman, a 52-year-old mother of two, reveals Tittler has a history of harassing people. In 2006, a criminal court judge in B.C. granted a peace bond against Tittler after a neighbour complained of harassment. A peace bond is similar to a restraining order. In order for a judge to grant a peace bond, the neighbour would have to show "fear on reasonable grounds." In the B.C. case it was not clear whether the fear was that Tittler would cause personal injury or damage property. The imposition of a peace bond does not result in a criminal record. Tittler admits to other confrontations in which the police were called.

It looks like Ms. Tittler has run afoul of the law once again: 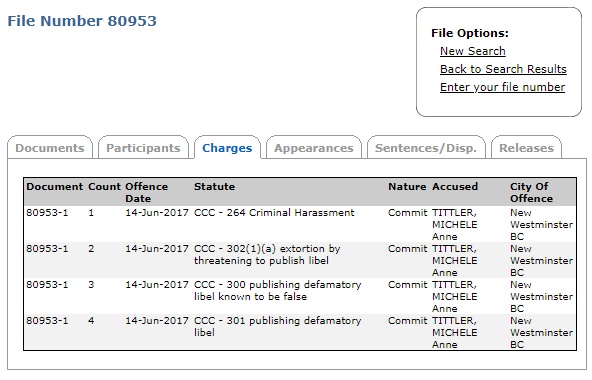 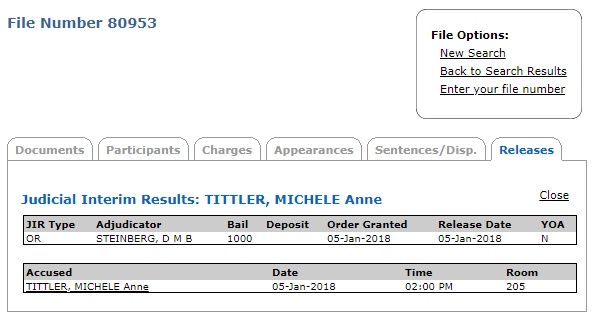 Ms. Tittler has since the time she has been charged been in court numerous times: 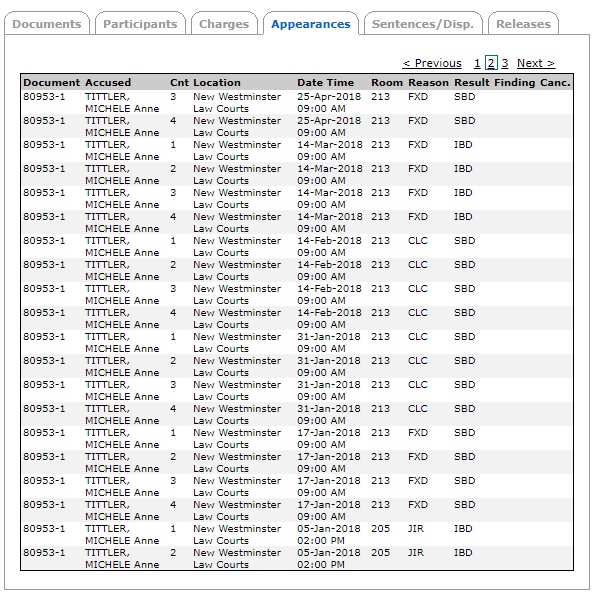 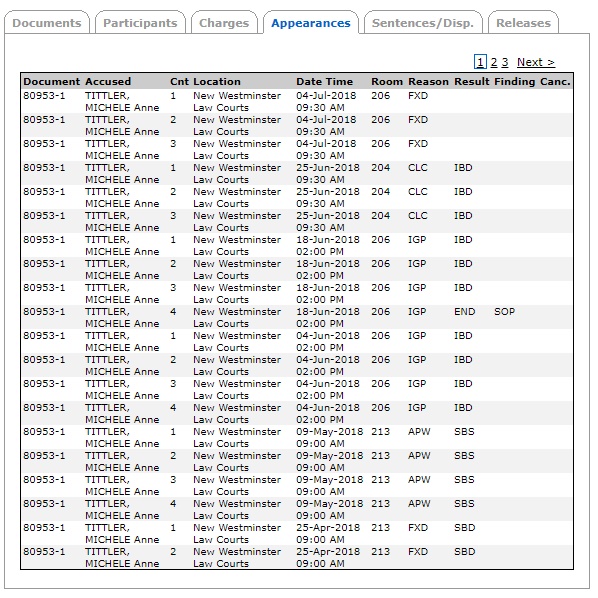 I did notice that the Crown stayed Count 4 (CCC 301 - Publishing Defamatory Libel), though my non-lawyer sense suggests to me that the remaining three counts are damn serious enough.

Ms. Tittler is being arraigned on Monday where she may be expected enter a plea:

The 4th count was stayed because the Supreme Court found some of the language involved in the statute to be unconstitutional. Crown counsel is not using that particular criminal code statute until the government can correct the problem with that language.

Tittler's latest charges result from a harassment and slander campaign she ran in June 2017 against her father - currently incapacitated; her sister - who has power of attorney over the estate; and the family lawyer. She was - as is her habit - publicly libelling all of the above in an attempt to get access to her trust fund while her father was in a coma. Her initial attempts at extorting money from her father - who had cut her off financially - may well have caused the medical crisis that now incapacitates him.

thanks for posting this. Tittler is a stranger anger filled, hate filled monster. Garbage. I have no love for this vile creature.

LOL! Thank you for sharing this wonderful news

its great to see this..about 6 months ago we contacted the city of Richmond where her ERBL is registered and filed complaints ...then we emailed MP's and the Heritage Committee and other federal aboriginal ministers and forwarded our complaints with all the info needed including the address of where its registered (her home)...we did receive emails back saying they would look into it.. she has been attacking me for 3 years now after i called her out... this is great news :)