Last week we witnessed what might be termed a feeding frenzy as the msm wrote a few stories about a simple little picture posted first on Warren Kinsella's website (and thank you Warren for crediting us with tracking it down).

Mayor Ford did offer a credible explanation which we accept without reservation, though our criticism of Ford's people for not asking a few questions when Latvis showed up to have his photo taken still apply.

Latvis himself seems to have had a mixed reaction to his recent (as opposed to the early 1990s) notoriety moving from bemusement.... 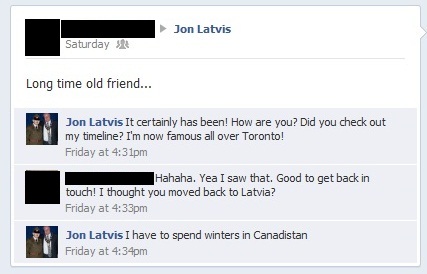 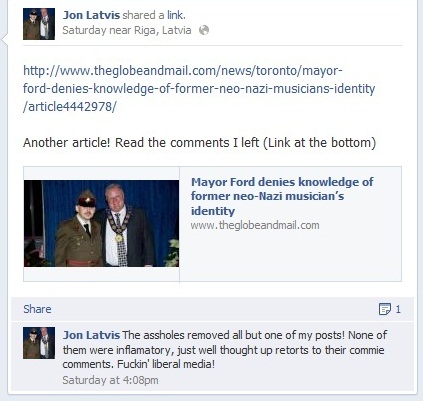 Meanwhile, Connie on Free Dominion thinks she's cracked the case. You see, dear readers, this is ALL just part of the vast, left-wing conspiracy to discredit conservatives:

Read more »
Posted by Kurt Phillips at 14:53 No comments:

Whatever Happened to Jon Latvis?

Statement from the Office of the Mayor

An online blog today posted a picture of Mayor Rob Ford meeting a citizen during the 2012 New Year’s Levee at Toronto City Hall. The blog alleges the man posing with the Mayor is a member of a hate group and has a history of making racist, hateful and offensive comments.

The Mayor of Toronto meets, and poses for photos, with thousands of residents each year. Over the past two years, the Mayor has hosted two New Year’s Levees. These events welcomed over 800 visitors to City Hall, and 700 to 750 of them were personally greeted by the Mayor who posed with them for photographs.

During both the Levee and the March meeting, the gentleman identified himself using a name different from the one attributed to him in the recent blog article. Once the photograph was posted online today, Mayor’s Office staff recognized the individual as someone who had met with the Mayor at the Levee and again in March.

At no time was the Mayor aware of allegations that this individual had made racist, hateful or otherwise offensive comments, nor were any such comments made during his meeting with the Mayor. Mayor Ford is a strong supporter of Toronto’s Jewish community and strongly deplores anti-Semitism in any form.


You know, the lead guitar player for the White supremacist band RaHoWa who later went on to who went on to what we might generously call a solo career: 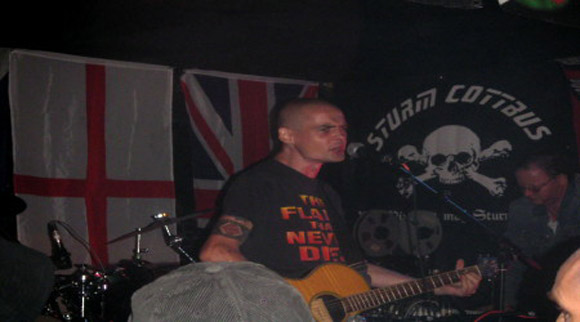 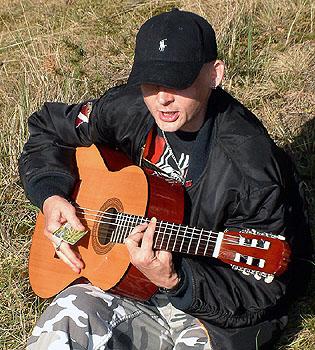 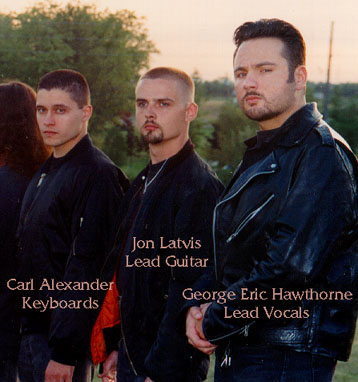 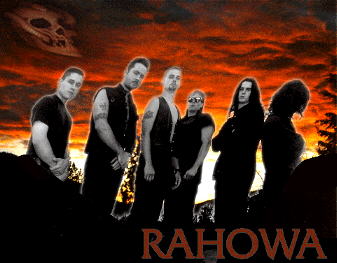 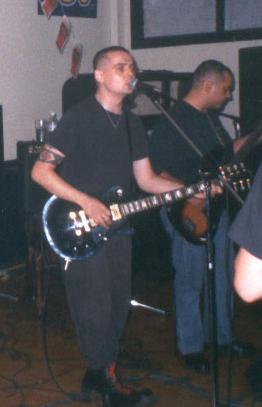 Man, the years have NOT been kind to Jon.

Now we really don't believe that the mayor is a closet Nazi, Latvian SS supporter, or fan of RaHoWa, but god damn! Doesn't he have people looking to make sure this kind of thing doesn't happen?

If you were a handler, if you see a guy in funny uniform waiting to have his picture taken with the mayor of the nation's largest city, perhaps you go talk to the guy? See what he's about. Get his name. Google it. And, if you learn that he played lead guitar for a white supremacist musical group with ties to the Creativity Movement and the Heritage Front, quietly ease him out of the line and suggest that it might not be a good idea to have his picture taken with the mayor now. Or ever for that matter.

Use your heads people!

We found this and a couple of other photos last night. Sent them to a few friends to get some confirmation that this was who we thought it was. Evidently, at least one of those friends sent this picture to someone who sent it to someone else (letting the cat out of the bag so to speak), and we were scooped as a result.

You might not know us, but you owe ARC members a beer for this.

So do you BCL.

And we don't mean that Heineken or wine cooler garbage. We expect Guinness at the bare minimum.

In light of what his press secretary has stated, if appears that Mr. Ford was also deceived in that Latvis didn't tell him his real name and, thus, Ford's team was unable to determine who Latvis was about.

We take the mayor at his word and thank him for the clarification, as well as his condemnation of antisemitism.
Posted by Kurt Phillips at 08:31 7 comments:

You would have to be living under a rock to not hear about the tragedy that occurred in Colorado last week when a gunman murdered 12 men and woman (and a child) during the screening of the latest Batman movie. In Toronto, there have also been high profile news stories involving guns in which people have died, including one that occurred at the Eaton's Centre and another at a community block party.

It's natural that people would ask themselves, and aloud, why these terrible events happen. It's also natural to feel for the victims and their families. We want to find solutions that will prevent anyone else from having to feel what must be terrible anguish (this writer lost a loved one as a child and can well understand how the survivors feel). But there is no clear cut solution, no panacea that will make things right. This isn't to say that we shouldn't work to ending violence in our communities, but to warn against the desire for a, "quick fix."

There are individuals, however, who do offer quick fixes.

Sort of a short post but Doug Christie, in his latest newsletter, has announced when the Topham case take place: 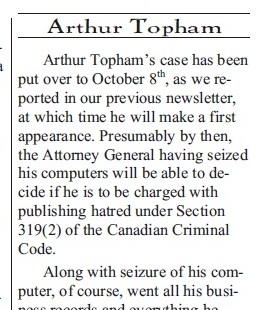 Christie also discussed information pertaining to the Tremaine case, much of which is already known: 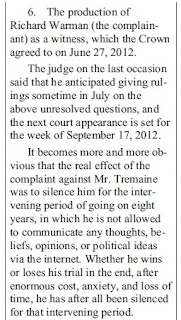 More later, but for now we're enjoying the summer weather.

The way you deal with Nazis is to, “break their heads.”

The JDL fundraiser for Free Dominion took place about a week ago and was attended a who's who of the Canadian right-wing blogosphere as well as some of the more active members of Free Dominion. Prior to this, Connie responded to our last article:

Well, we really don't have to paint the JDL as violent, Connie, since your own membership seem to agree:

Now, our Free Dominion friend here couches the violence of the JDL in more respectable terms; they represent the "warrior race" that is befitting of the Jewish people. Our Free Dominion friend also goes on to claim that the reason why we or anyone else would be concerned about the JDL is because we are closet anti-Semites who want Jews to be powerless in the face of those who would harm them.

It's a ridiculous accusation (especially directed at us) but this is sort of Free Dominion's schtick.

It  might be instructive, however, to learn how the JDL earned the honor of being referred to as warriors since the Canadian branch of the JDL has engaged in the very activities that Free Dominion has accused (and condemned) us at ARC of engaging in.

But we begin at the beginning. 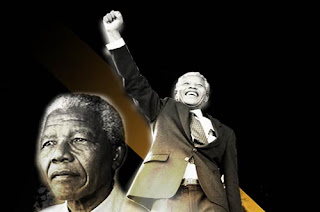 And I mean troublemaker in the best possible way:

There aren't a lot of people who could be considered to be a great man or great woman.

But Mandela surely is near the top of the list of humanity who can be considered great.

At least according to Paulie.

The usual histrionics from Paulie on White News Now.

Back on VNN, fugitive Craig Cobb continued to delude himself while at the same time encouraging the harassment of the presiding judge:

We'd finish this post with something witty, but it's late and this writer has spent a long day on a fishing boat. Also, the WiFi I'm catching at the camp site seems tenuous at best. Make up your own funny ending. Feel free to post it below and we'll add the best ones to the article.

My Kingdom for a WiFi Connection!

The other members of the Collective who write for the blog are all on vacation. I, the lead writer, planned on carrying on even though I'm currently camping.

Riding Mountain National Park has a lot of things going for it. Great walking trails, what I've been told is the highest number of black bears per square kilometer of anywhere in North America, and some decent fishing.

What it doesn't have, or at least what I've had difficulty finding, are WiFi hotspots.

Oh well. A break from the blog might be well in order for a few more days.
Posted by Kurt Phillips at 23:43 No comments:

When we write an article in which Free Dominion is mentioned, it is often the case that they respond in some way. Usually with nasty names with what we could only assume to be spittle flying forth from their mouths in something approaching, though not quite reaching, apoplectic rage.

They don't seem to like us all that much.

Usually we ignore what they write about us, but after reading some of the responses to our article regarding the JDL fundraiser for Free Dominion on the thread, "Anti-Racist Canada member joins FreeDominion - Breaking !!" we felt that it might be useful to address some of what they have said about us. In fact the nature of the responses might necessitate a few different posts on our part.

Paulie Shows His Hand on Section 319

Well, it's not as if we didn't know this already.

When the Conservatives voted to remove Sec. 13 from the Human Rights Act, they justified it in part because of the existence of Section 319 of the Criminal Code (in layman's terms, the hate crimes law) which they claimed was more appropriate when dealing withe issue of extremist rhetoric. They even stated they planned on strengthening the existing legislation.

All this might be true, but Paulie has a new target in his sites:
Read more »
Posted by Kurt Phillips at 23:16 2 comments:

Tremaine Allowed to Post on Stormfront for "Research" Purposes

Sometimes we look at the decisions made by the judiciary and shake our heads in wonder.

And not in a good way.

Facing charges for online hate speech, a Regina neo-Nazi leader has been given a judge’s permission to go back online to white supremacist websites for help in proving that the anti-Semitic and racist comments are true.
Read more »
Posted by Kurt Phillips at 21:45 4 comments:

Back on June 14, we briefly mentioned that Dr. Dawg had won his appeal and that the case would now go to trial.

We don't want to argue the merit of the arguments involved, but we can't help but notice the odd assortment of characters who have lined up over the past year to support the Fourniers in this case.

When Dawg first filed his suit, Paulie chimed in with his support for the Fourniers: 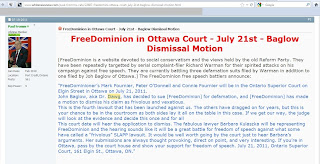 In another more recent post, Paulie called on his followers to support the Fourniers and Free Dominion after Dawg won his appeal.

Today, we learned that the Fourniers will be supported by another group: