Video from the BC Humanist Association

We were sent a link to the following video on YouTube. It is a presentation from August 17, 2012 by Edwin Hodge concerning white supremacy in the digital age.

Overall, this was a very well done presentation. Any issues we have are relatively minor:

Overall though, the presentation was pretty solid and reinforces our message that we do need to be concerned about white supremacists because of the violence much of the membership engages in.
Posted by Nosferatu200 at 14:21 3 comments:

Continuing Our Heritage Front Project (And An Examination of Marc Lemire: Part XI)

We are still continuing our project of documenting the history of the Heritage Front by collecting photographs, letters, and hate propaganda from the period between 1989 and 1994 when the hate group was at it's peak, 1995 to 1999 when the group was in decline after Elisse Hategan testified against the leadership and Bristow had become known as a CSIS mole, and 2001 to 2005 when Marc Lemire attempted, and ultimately failed, to revive the hate group under his leadership. We are also eager to receive any other information that could be provided, be it related to the Heritage Front or any other Canadian hate group (we did receive some very interesting documents concerning the Western Guard not long ago).

Not long ago we received a parcel containing copies of "The HF Report" which was the Heritage Front journal that existed after "UpFront" was discontinued; the publication of "The HF Report" took place between 1997 and 1999. However, we should have looked closer, as we also found a copy of "UpFront" which we have already mentioned here on this blog in relation to our documentation of Marc Lemire's Heritage Front connection: 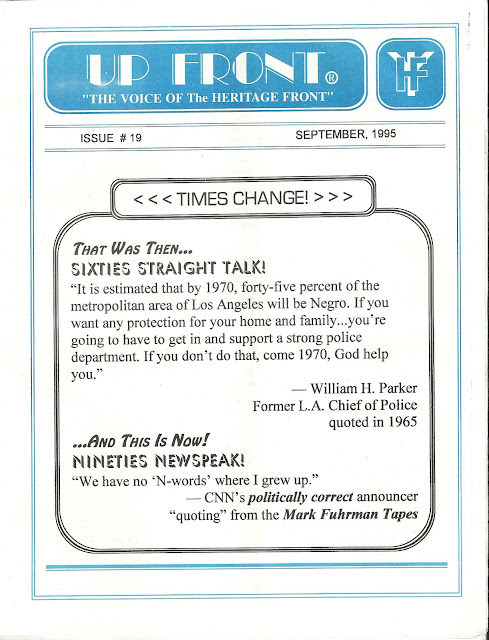 An update especially important for those who don't consider neo-Nazis to be a threat.

Trial dates are now set for both men accused of beating 47-year-old Mark Mariani to death in a 16th Avenue parking lot in 2010.

It was decided on Friday in a Calgary courtroom that Tyler Sturrup will face a judge and jury in April 2013. Seven months later, the fate of his co-accused Robert Reitmeier will be decided in the same fashion — a date that had been previously set.

Both Reitmeier and Sturrup have ties to a neo-nazi group, but police say that wasn’t the motive for the crime, which they believe was a random act.

The two were arrested in June of 2011, eight months after Mariani’s death.

At the time of his death, police said they believed there was a third attacker.

The arrests were made after a Crime Stoppers re-enactment and a plea to the public for help.

State of Democracy in Russia

In February 2004, Khursheda Sultanova, a 9 year old girl was brutally murdered by neo-Nazis who stabbed her repeatedly. When the individuals were finally brought to trial, they were charged not with murder, but will hooliganism. Their sentence upon conviction ranged from 18 months to 5 years; the teenager who killed Khursheda received 18 months.

In February 2012, members of the Russian punk band Pussy Riot protested the increasing authoritarianism of Vladamir Putin's Russia with an improvised performance in Moscow's Cathedral of Christ the Saviour that was critical of both Putin and the Russian Patriarch, Kirill I. They were also charged with hooliganism when arrested and subjected to a show trial. Their sentence upon conviction was 2 years in prison.

In Putin's Russia, the murder of child is treated on par with criticizing the president and Orthodox Church.

Nothing Paulie does ever really surprises us all that much, but that doesn't mean that we won't continue to comment every time he lets that veil of "racialist" respectability, already thread-bare and moth eaten, slip. His latest?


So Paulie believes that a comparison between an ordinary, elderly woman who seems to have lead a life of some hardship and a pampered 23 year old international supermodel who has a team of make-up artists, photographers, and photoshop experts indicates the inequality of the, "races."

NOTE 1: We originally thought the model on the left was Rosie Huntington-Whiteley. We've since corrected our error.

Aside from commenting on the superficiality of it all, we decided that we had two choices in dealing with this.

We could take the high road and discuss the cross-cultural concept of attractiveness from an ethnic perspective and the historic views of what beauty has meant over time.

Or we could take the low road and make fun of boneheads.

Racist and homophobic graffiti in Lethbridge

We're a little late on this one, but it's still worth inclusion:

People in southern Alberta are busy cleaning up racist and homophobic graffiti that appeared overnight on many of their homes, garages, fences and cars.

Police say they are following several leads in the case, but added there is nothing to suggest that it was directed at any particular person or property. The graffiti is not considered hate propaganda, nor motivated by bias or hate as defined by the Criminal Code of Canada.

We know of some boneheads in Lethbridge, but this doesn't seem in character for them (we could be wrong though). Might just be some idiots. We'll see.

Our friends at OPP have been at work and have proven that Wade Michael Page wasn't only a neo-Nazi band member, but a full-on member of one of the United States' most infamous and violent hate groups: 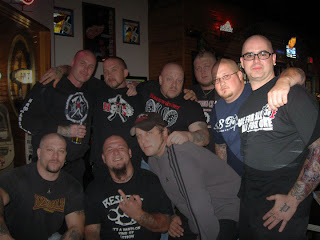 When it was learned that Wade Michael Page was the shooter at a Sikh Temple in Wisconsin, just as quickly news came out that he was in a number of WP bands. But more information has come out that says the original belief that he was not part of any actual hate group is very, very wrong.

OAK CREEK, WI--The shooter in the shooting at a Sikh Temple in suburban Milwaukee that killed six people before police gunned him down has been identified as Wade Michael Page, a member of the Hammerskin Nation HSN, the oldest and most violent neo-Nazi bonehead organization in the United States.
Read more »
Posted by Nosferatu200 at 22:44 6 comments:

Information has been coming out concerning the murder of 7 Sikhs at a Wisconsin temple. The alleged murderer, Wade Michael Phillips, was a former member of the American military who was discharged in 1998 (evidently his discharge was under less than favorable circumstances). He later joined a number of neo-Nazi bands before founding his own called End Apathy.

We know this is an American story, but since it relates in some ways to our previous stories (here and here) with regard to neo-Nazi bands, we thought we'd talk about it briefly.

There are people who are questioning whether or not Wade Michael Page was a neo-Nazi. These photos from the band's Myspace page should answer those questions for the doubters:

We noted in our last article that Jon Latvis spoke to a reporter from "The Sun" in an effort to extricate himself from the unpleasant notoriety as a result of Warren Kinsella's recent article.

Or, as Latvis himself puts it:

Latvis has taken a not so novel approach to dealing with his past.

He has decided to lie or, as a friend has put it to us: