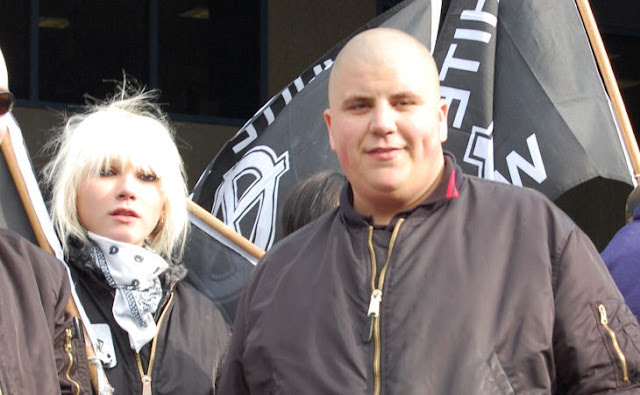 We have said that we are not members of Anti-Racist Action (ARA), however we do support the aims of non-violent movements that oppose racism. In that vein, we will post the following announcement by ARA Calgary, a group that uses non-violent means to educate citizens about the dangers of the Aryan Guard and other such movements. ARA Calgary has acted within the law in their activism and have only acted in self-defense when they themselves have been attacked.

Anti-Racist Action Calgary have a proven record of success when it comes to shutting down racist groups such as the Aryan Guard. In recent years the efforts of ARA Calgary contributed to the collapse of Glenn Bahr's and Peter Kouba's racist group Western Canada For Us (WCFU) after only a few short, though active, months of existence in Alberta.

Read more »
Posted by Kurt Phillips at 11:28 No comments:

We're Mentioned in the "Briarpatch"

We guess this is a tooting our own horn moment, but we would have posted this link regardless because it's a great article. "The Briarpatch" is a progressive magazine that deals with issues ranging from human rights, corporate media control, the environment, and numerous other issue that are not effectively dealt with (if at all) by the mainstream media. In a recent article, "Fighting Fire With Fire: Anti-racist Organizing in Alberta" the magazine discusses the growth of the Aryan Guard in Calgary, but more importantly the efforts by anti-racist activists to shut the group down. This blog is mentioned in relation to the videos posted by Jason Harley and others:

If videos posted on the Anti-Racist Canada blog are any indication of the kind of non-violent family values the Aryan Guard espouses, Devine and Bernard have a right to be skeptical. In a profanity-laced diatribe, Aryan Guard member Jason Harley explains that multiculturalism is like putting a red sock “representing the communists” and a blue sock “representing the Jews” into a washing machine with a white load of laundry. “Everything turns fucking fruity and purple and fucking gay. Fucking retarded. There you go. Fucking white supremacy.” In another video, two Aryan Guard members fight bare-chested in the snow on a quiet residential street.

The A.G./ARA Throwdown: Much Ado About Nothing

On July 15, 2008 the Calgary ARA and an Aryan Guard member who goes by the name of Willis had a bit of a run in. The ARA members had been at a Calgary skate park putting up fliers and talking to the youths who hang out there. It appears that Willis felt that this was fertile ground for recruitment, even though some of the youths he managed to swing to his side aren't even White.

Now the Aryan Guard would have you believe that the ARA swarmed over Willis in his own apartment, but we think that after the amount of b.s. the Aryan Guard has spread, you won't buy it. So here's what did happen.

When the ARA members were leaving the skate park on their way back to the C-Train, the walked by an apartment complex. Willis was on his balcony and started Seig Heiling. Braniac then came down to start a fight. He threw the first punch which injured an ARA member. The next punch resulted in Willis taking a nap on the concrete.

The Aryan Guard is always seeking new brothers and sisters, if you are interested in relocating to our Calgary area, we will pay the damage deposit for your residence. We believe that through fortifying our current locations with more White Nationlists we can spread the world more efficiently and than in the future branch out further throughout Canada.

If you are interested in moving to Calgary, please let us know.

First, we note that McKee, who is functionally illiterate, has someone to proof read his entries before he posts them now (either that or OdinPatrick, the Canadian forums moderator on Stormfront, has been a busy beaver). Second, the claim of support files in the face of claims made earlier by an Aryan Guard supporter who now lives in British Columbia.