Far Right March in Hamilton on March 25: We Have the Details

Would it kill you to use proper punctuation?

More on this later.

The far right have a long history of attempting to appear as civic activists in order to cover up their bigotry with a veneer of respectability. For example, the KKK in the United States has participated in the "adopt-a-highway" campaign in a number of states: 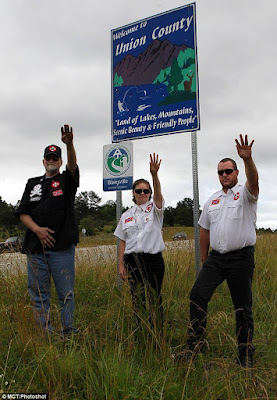 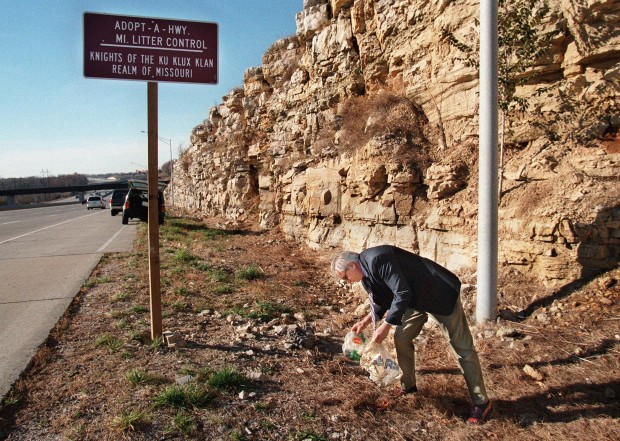 Canadian hate groups, including the now (thankfully) long defunct Heritage Front and the Canadian Heritage Alliance, have engaged in similar tactics in this country: 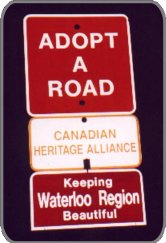 Well now more contemporary Canadian hate groups have decided to engage in some public relations of their own to try and rehabilitate their rather tarnished image: 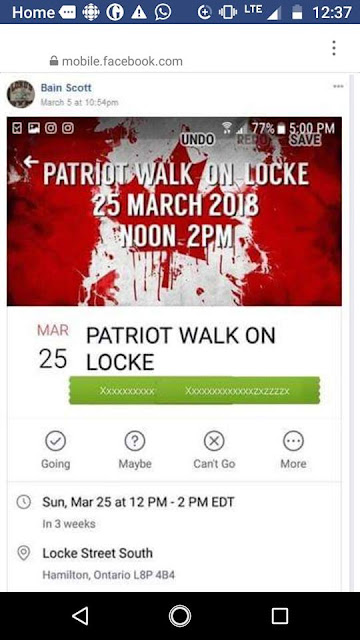 The march is being organised by Shawn McBeath (aka "Bain Scott") ostensibly in response to the vandalism that took place earlier this month on Locke Street, though the real reason appears mainly self-serving. McBeath who is a former member of the Soldiers of Odin and currently a III% militia member, as well as some of those who may be appearing at this event, are of course problematic in that they have bragged about instigating violent encounters with counter-protesters and bringing weapons to their events.

McBeath and his fellow travelers have done a very good job of keeping the details of the event under wraps so at this moment we have very little information.... 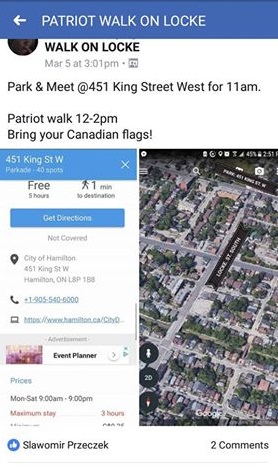 We actually know pretty much everything about it.

ARC and others have been sent a great deal of information that we all have been sitting on for a few days. By the time this article is published, the good people of Hamilton will have already organized their members and have begun flyering in anticipation of the groups who plan on attending which includes but is not limited to:


Now how is it that we got this information? Well that's really a funny story. Long story short, certain Hamilton area bigots who have been in the news should be more careful about their Internet security: 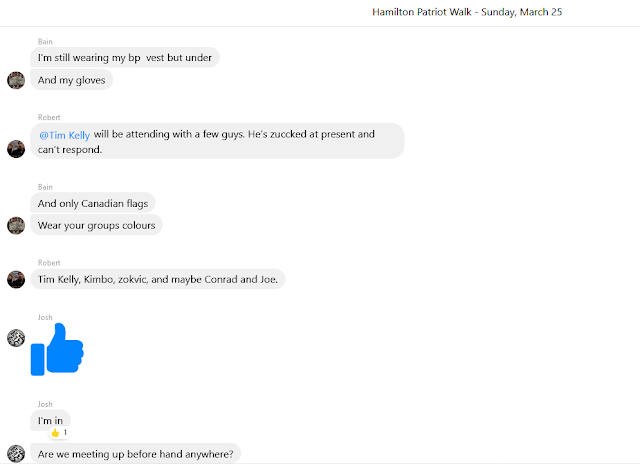 Yeah. We have the screen shots from their private group chat.

The first few, including the one above, focus on what to bring and what kind of impression they wish to make. No weapons, though it looks like McBeath is still going with body armor.... because it is slimming maybe? They are also asked to bring flags but are pointedly asked not to bring the Red Ensign which I find rather interesting: 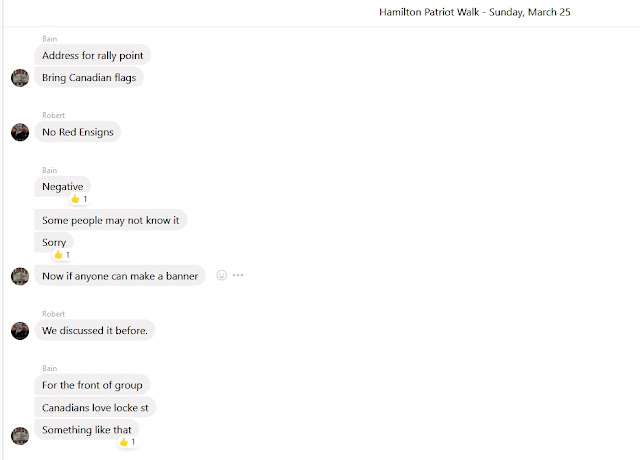 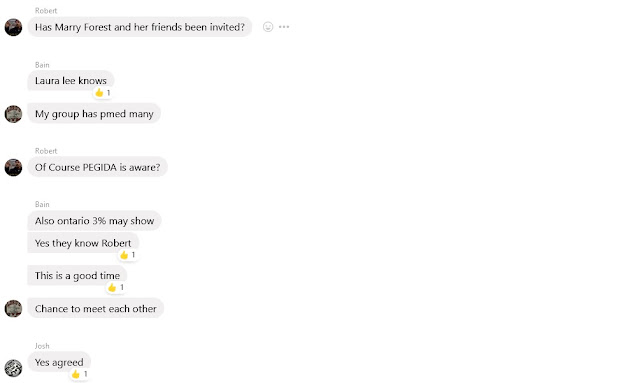 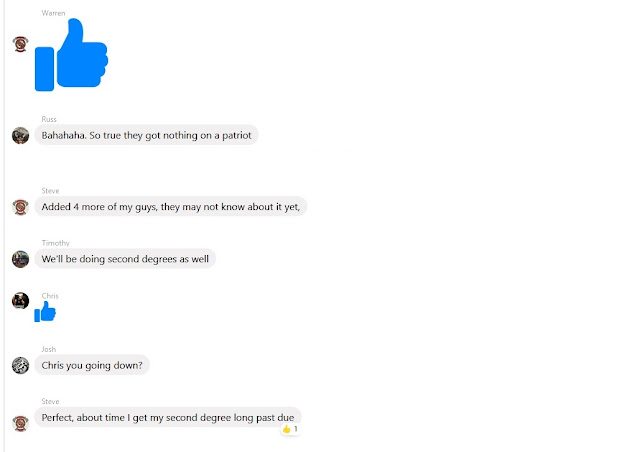 Another section they discuss whether they wish to promote the event publicly; McBeath is dead set against that particular proposal and seems pleased as punch that "the left" has said very little and are likely in the dark about the details.... whoops!: 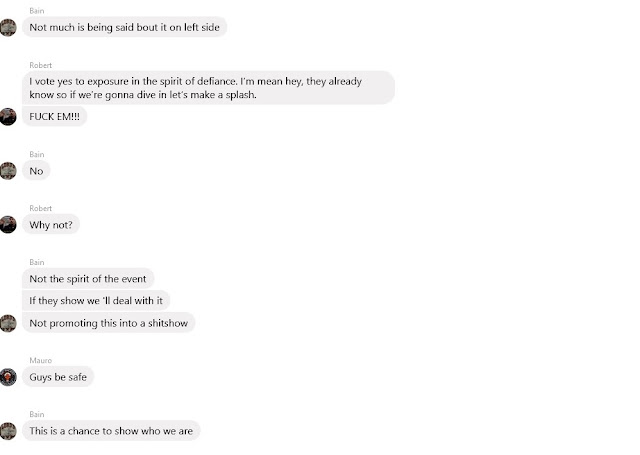 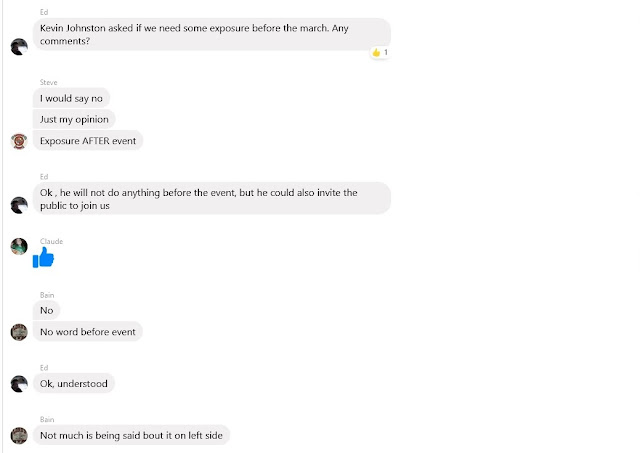 Yeah, sorry about that.

Another part of the chat focuses on doing reconnaissance before the march takes place. McBeath and Jones appear to suggest they would take the lead on this and attempt to conceal their identity as much as possible by wearing nondescript clothing.  They also try to identify folks on the left that they think may be problems: 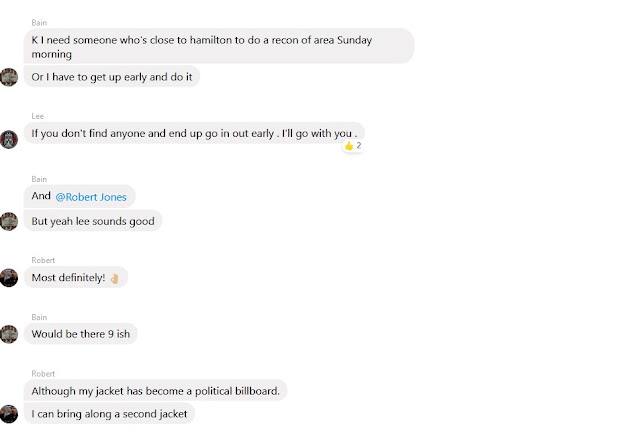 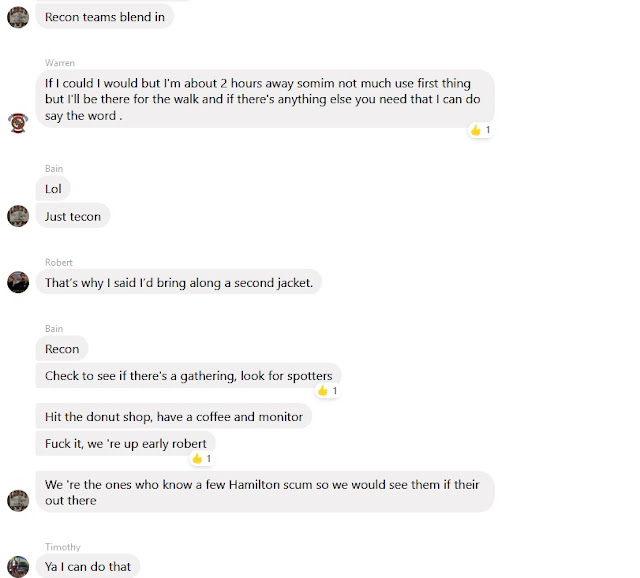 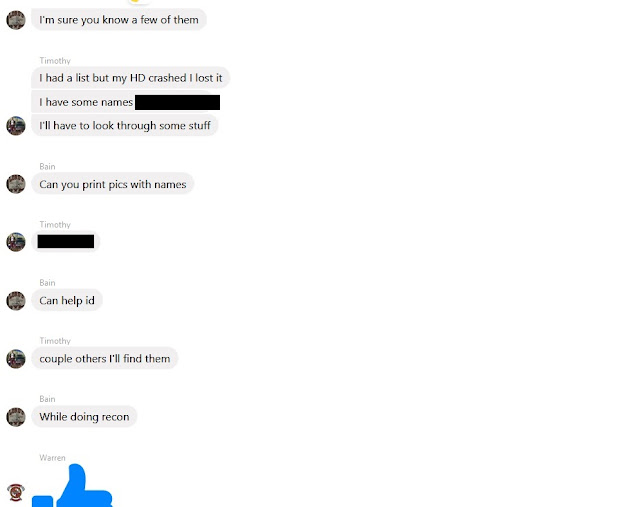 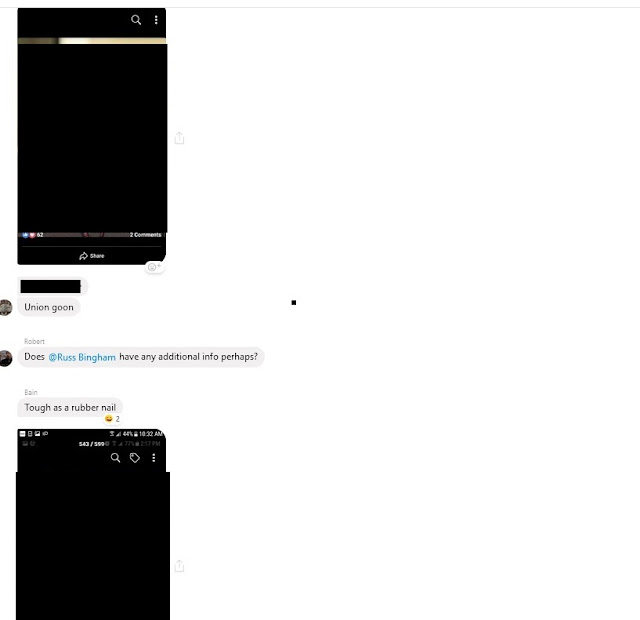 The longest portion of the discussion however had little to do with Locke Street.

Shortly after the vandalism took place on Locke Street, The Tower was broken into and vandalized. The Tower is an anarchist social center and library which is close to (perhaps attached) to a high school. It would appear that this attack was in response to the earlier events on Locke Street, though there isn't any indication the folks associated with The Tower were involved.

In any case, when mentioned in the group chat McBeath and the others decided it would be a good idea to visit The Tower and harass the membership. Jones also writes about luring out the members which has a rather ominous tone when one considers the violent rhetoric and behavior of McBeath and his cohorts as documented on this blog: 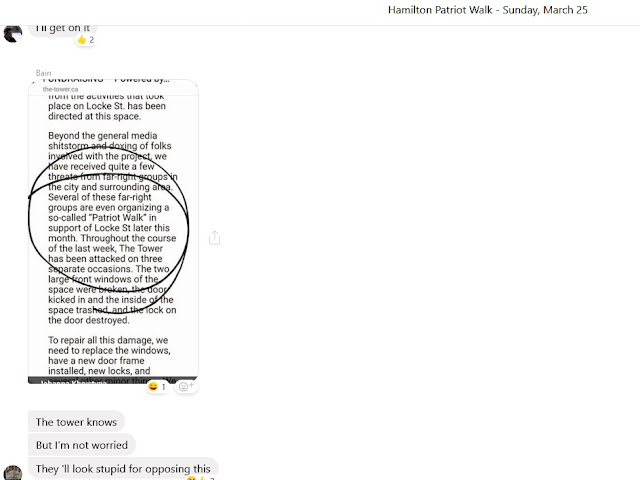 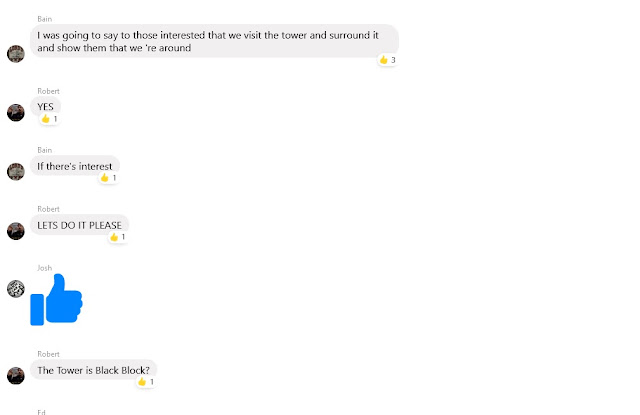 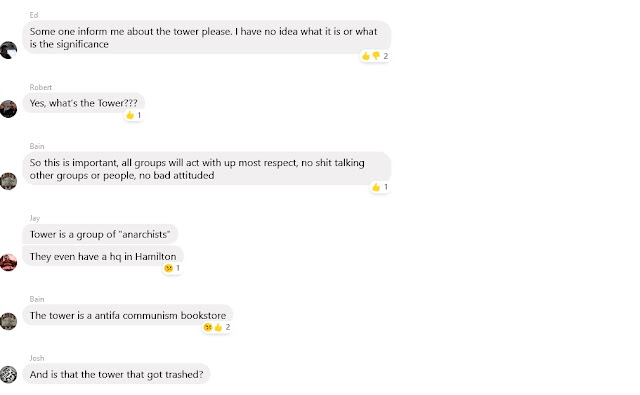 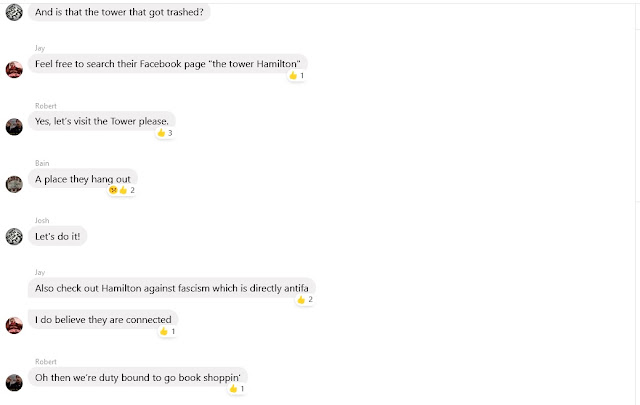 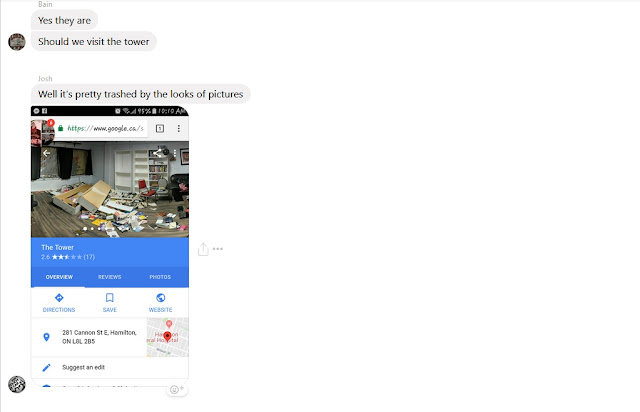 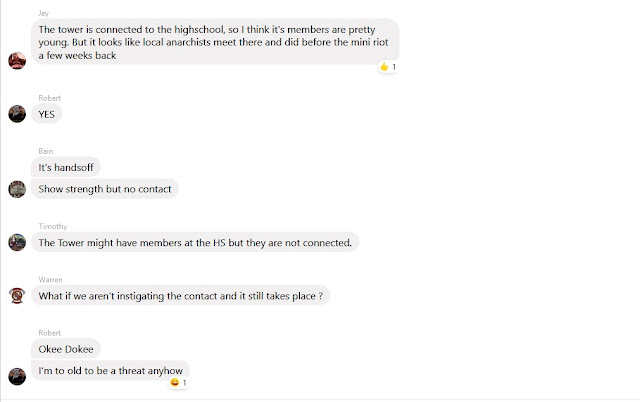 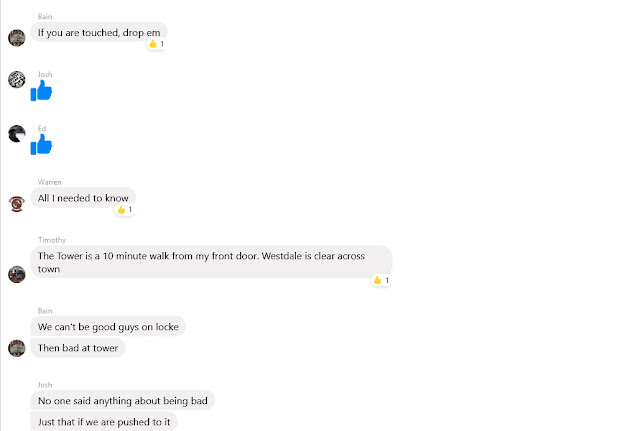 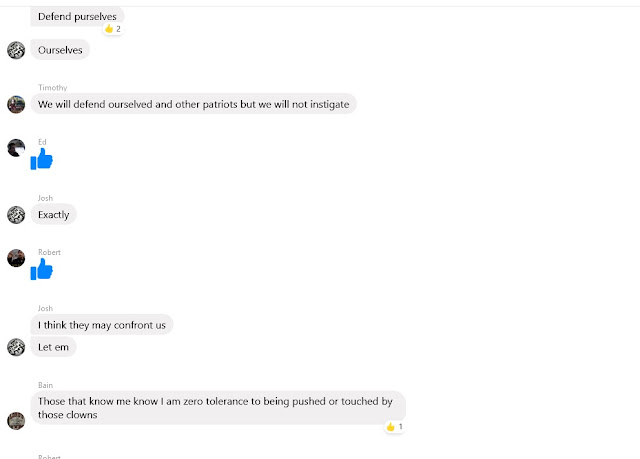 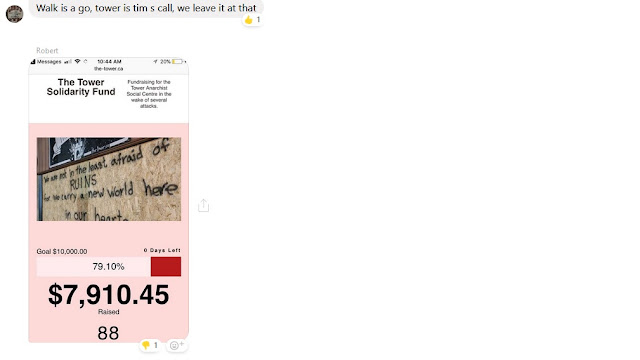 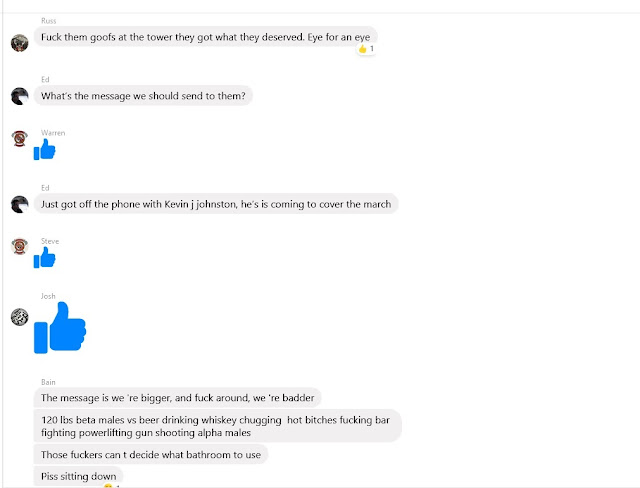 Oh Sean, you kiss your mother with that mouth? Tsk tsk.

And sure, the organizers can change the venue and not harass the folks at The Tower as they have plenty of forwarning that we, and as a result they, know the plan. But that's not really the point is it?

At this point I'm sure that the members of this group chat -- hell, the entire "patriot" movement in Canada who follow this blog for that matter -- are wondering how the hell we and others got a hold of this information.

It could be any number of ways.

Maybe one of the participants forgot to log off a public computer he was using?

Could it be that one or more of their members, some of whom are in positions of leadership, aren't actually on their side?

It could be that someone shared the information above with a woman he's courting in order to impress her with how big a deal he is?

Or is there another explanation?

So many questions I'm sure. Who do I trust? What else do they know? What information has been sent to employers or the police annonymously?

Have fun trying to find the answers.

Now with all of this in mind, here are some of the people could be identified who participated in the group chat and/or people who were mentioned who may be participating on the events of March 25:

UPDATE: Not long after this article was published, McBeath responded with a message to the ARC Facebook profile: 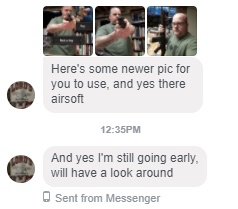 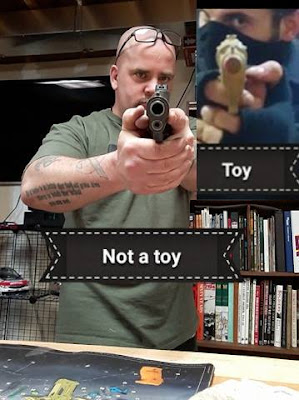 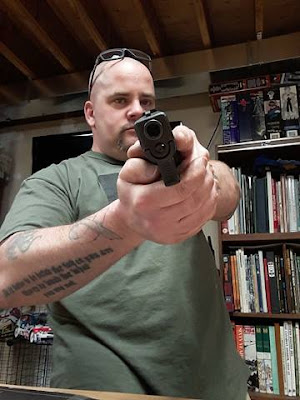 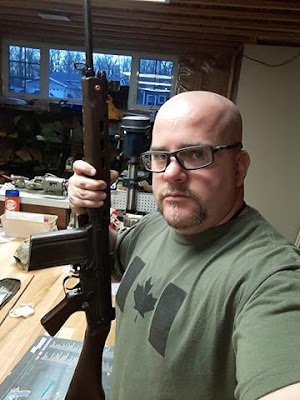 Such a sweet talker.

UPDATE: On March 22, Zokvic spoke to Ronny Cameron via Facebook Live Video. Here is that excerpt:

Tim Kelly, from brantford, is now the national leader of proud boys canada. He has been seen a lot in Hamilton recently wearing his shirt, and hanging out with the hamilton president, Brandon LaPointe. They frequent Brandon's house at 403 victoria ave n for their meetings.