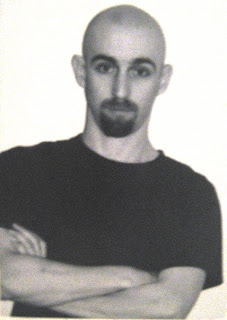 Bill Noble was released from the Prince George Regional Correctional Centre in British Columbia on Friday, April 25, 2008 after serving two months of a four month prison sentence for violating Canadian hate crime laws. Noble will also have to abide by other restrictions, including a three year period where he will not be allowed to access the Internet or being in the vicinity of a computer that has the ability to access the Internet. We imagine there might also be restrictions on whom he may associated with as well, however this is not yet certain.

Noble is a member of the Calgary based neo-nazi gang the Aryan Guard. He has a long history of associating with racists before his involvement with the Aryan Guard, including Glenn Bahr (founder and leader of Western Canada For Us), Nathan Touchette, Ciaran Donnelly, Jessica Beaumont, Paul Fromm, Terry Tremaine, and many others.
Posted by Kurt Phillips at 13:56 No comments:

White Pride? Who Do They Think They're Kidding?

On March 21, 2008, the Aryan Guard (updated as of April 26, 2008) marched through downtown Calgary under the banner of "White Pride." "White Pride" is a phrase used by racists to sound as if they are not in fact racists, but merely proud of their heritage. They complain about the celebration of Martin Luther King Jr. Day in United States and Black History month and claim that if minorities can be proud of their heritage, then why can't they? "It's discrimination against White folks," they lament and caterwaul about the terrible injustice that they are not allowed to be proud of their heritage, ignoring the fact that days commemorating European heritage already exist, including but not limited to Saint Patrick's Day, Columbus Day, Robbie Burns Day, Thanksgiving, Oktoberfest, St. Steven's Day, Victoria Day, Polish Heritage Month, and so on and on and on. But why would racists allow facts to get in the way of their propaganda message?

So "White Pride" was the mantra of the Aryan Guard on May 21, 2008 and has been since it's inception. In fact, one Aryan Guard member was quoted on the day of the rally by a reporter from the "Calgary Herald":

The Aryan Guard posted the following on their website regarding the march, again calling their march a rally for White Pride:


The Aryan Guard and affiliates, including a few B.O.K members, the leader of the NSPC, and other supporters successfully hosted a White Pride March, for the elmination of Racial Descrimination against Whites.

45+ individuals marched throughout downtown expressing their pride within their race, many carrying White Pride World Wide and Celtic Cross flags and screaming chants of white liberation.

The White Civil rights activists were met by 120+ confused, angry communist and anarchist youth individuals, who seemed to oppose our declaration of White Pride and our advocation for the elimination of racial descrimination against whites. Interestingly enough, the communist and anarchist organizations seem to be in bed with each other - regardless of the fact their political beliefs are a complete contradiction, this shows how true to their beliefs they really are.


The founder of the Aryan Guard, Kyle McKee, later responded to a criticism leveled at the Aryan Guard on Stormfront which echoed the sentiments above:


[in response to the post on March 30, 2008 that reads, “If we don't want people to call us nazis or neo-nazis we really have to stop celebrating Hitler's birthday.”] LOL thats awsome!Do you think that is what it is gong to take? because just a little over a week ago we marched down the street with white pride flags and they seemed to think that was about white suppremisy and hate! I don't think it will make alot of diffrence if we do or don't selibrate a great mans birth! I for one am not to concerned about someone calling me names!

In August 2007, McKee was already talking about organizing a march under the banner of "White Pride":


Let's organize a Straight pride parade and a White pride parade. If they say anything then that would be discriminating against a race or sexual preference. and for any one in Calgary or some one that could find out when we have gay stuff here so we can start protesting them?

So the events of March 21, 2008 were not about hate or "suppremisy" (we assume he means "supremacy") according to McKee. If that's the case, then maybe McKee should talk to the person who was wearing the jacket in the next photo:

ARYAN GUARD at the One Peoples Project. This is a continual work in progress. As we're able to identify people, the entry will be modified.
Posted by Kurt Phillips at 17:17 1 comment:

We haven't updated for a while with the exception of Bill Noble in his prison garb. Considering the Aryan Guard march on March 21 this might appear as if we've dropped the ball. In fact we will be posting updated information on the march which will include a number of identifications. However, our main writer has been busy with another project.

Late last month, Daryle Lamont Jenkins who runs the One Peoples Project based out of New Jersey invited to write about Canadian issues on his site. In response we've been updating some of the Canadian entries in the Rogue Gallery (BILL NOBLE and BILL WHATCOTT) and writing some new entries (TOMASZ WINNICKI and MELISSA GUILLE). We're trying to get a handle on the inner workings of the website, but Jenkins has been very helpful by cleaning up and editting the articles that we've written for the OPP site.

We will not abandon this site, but since all of us have jobs outside this project we're going to beg your patience as we work on presenting information on the far right in Canada for two websites.