First, the comedy. VNN is one of the preeminent "White Nationalist" websites on the Net. Their web forum is frequented by people who make the posters on Stormfront appear lucid and rational by comparison. The VNN posters take a great deal of pride in their vulgarity and their overt calls for violence against minorities and those individuals who oppose them. Among the prominent posters on VNN are Canada's own Tom Winnicki, William White (recently arrested for suggesting the murder of a juror in the Matt Hale case among other things) and site owner Alex Linder.

Take a look at the following screen shot and try to guess where there's a bit of a problem. Here's a hint: they might have done poorly in geography.

Not that we want to poke a hornet's nest.

But we thought we'd post some of the recent war of words that have taken place on this blog between the Aryan Guard and Volksfront.

In no particular order:


There will be no beatings in , should the Aryan Guard choose to "expand". is a soft foothold for the renegade Blood and Honor and Volksfront, led by none-other than a person we will call "Kevin", who had fled due to his connections with CSIS, and his father, a JOG police agent.
Read more »
Posted by Kurt Phillips at 23:09 11 comments:

Before getting to the main event, we continue our long running saga detailing the dispute between Tom Trenerry and John Marleau. In this exciting episode, we learn about the origin of the rather heated disagreement between these erstwhile allies: 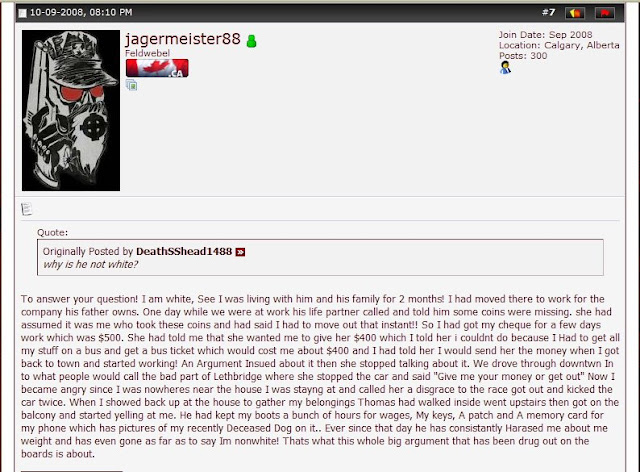 We think that Tom actually hurt John's feelings here. John seems upset that Tom has continues to make fun of him because of John's weight problem. True, that's a low blow. What we could rather Tom comment on is John's apparent inability to bond with a woman who isn't under the age of 16. That, our dear readers, is truly sad.

At this point, we have to admit that the Trenerry and Marleau spat has grown predictable, tiresome, and boring. Until something more exciting occurs, we're not going to tune in to their minstral show any longer. Changing the chanel.

What has interested us is the rising tension between the Aryan Guard on one side, and the "A" brothers and Volksfront on the other. We have earlier discussed the online fight resulting from comments made by D.A. on the Stormfront, Blood and Honour, and Aryan Guard Forums (here and here). Soon after posting the second to the two articles, we received the following message, presumably from someone close to the Aryan Guard, if not a member himself:

We reported on this earlier, but we thought our readers would like an update. A recent article in the "Calgary Sun" discusses the incident involving an attack on a Japanese tourist by at least one member of the Aryan Guard. That this woman was assaulted was bad enough, but the manner in which it occurred is chilling. It appears that the alleged attacker specifically targeted to woman to earn his red laces.