ARC has written very little about Travis Patron, the white nationalist founder of the "so fringe other fringe political parties consider them fringe" Canadian Nationalist Party. 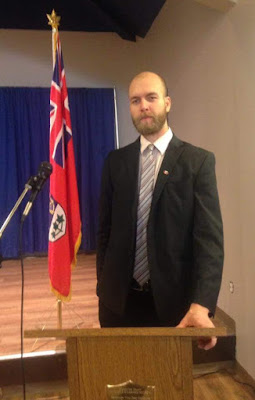 Because he is so marginal and insignificant, I've only referred to him in a single article:


Not that he hasn't been trying very hard to raise his profile. Patron has been posting on Kevin Goudreau's Facebook group and has been interviewed by fellow "white nationalist" Ronny Cameron for example. He has also engaged in cross-country speaking events, including tour of Western Canada that began earlier in the month: 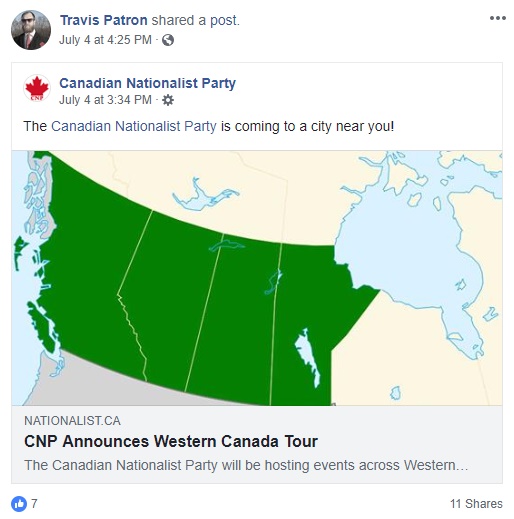 The thing is, none of his speeches in any part of Canada have resulted in more than four people showing up to hear him speak.

That's not an exaggeration either. Travis Patron quite literally can not draw many more people than would fit in a standard PolyJohn: 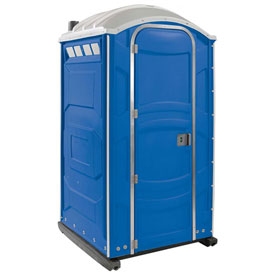 Patron's Western Canada tour has mostly proven to be no different: 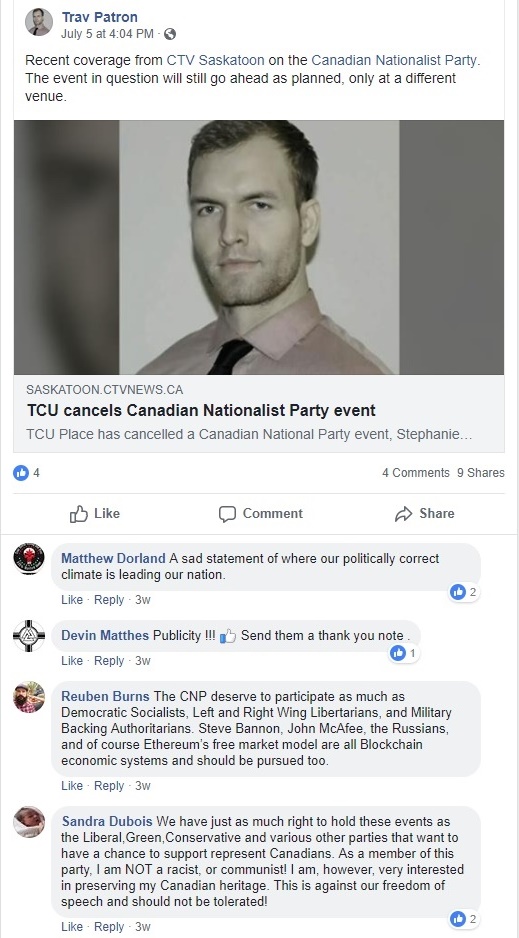 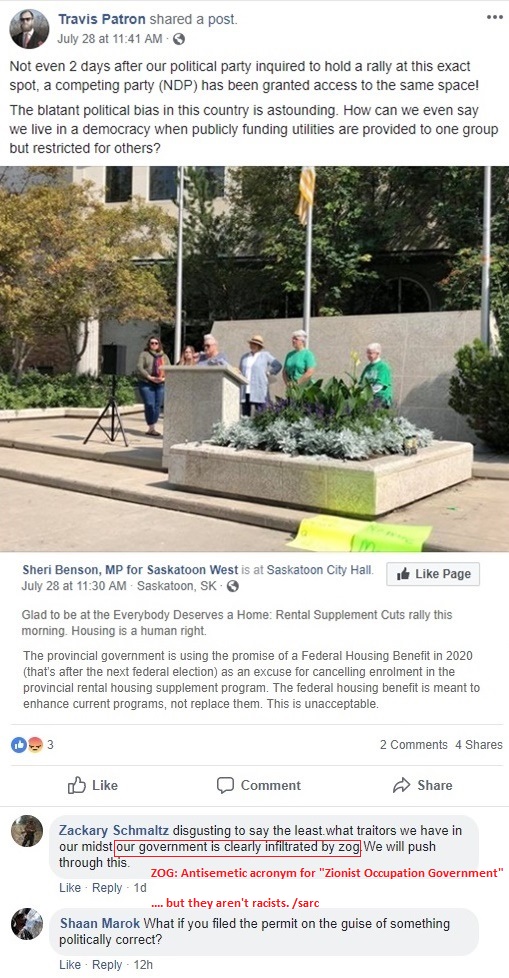 With this in mind, Travis Patron's speaking tour stop in Winnipeg must have resulted in mixed feelings.

On the one hand, he drew far more people to this engagement than he has for any other stop in the history of his "party's" existence.

On the other hand though, only three of the people who attended were there because they wanted to hear Patron speak: 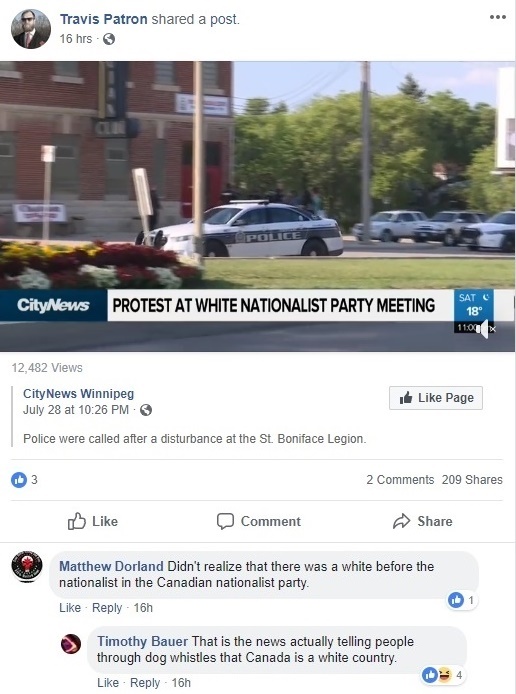 Yep, that's right. Travis Patron was welcomed to the city by the fine folks with Fascist Free Treaty 1 (FF1):

FF1 had this to say about the protest at the Belgian Club:

On July 28th 2018 The Belgian club/ St. Boniface Legion (407 Provencher Blvd Winnipeg Manitoba) hosted a meeting for the Canadian Nationalist Party. A group that believes on a monocultured society and who's leader is as much deluded as he is a fascist scumbag.

Antifascists confronted them and told them they were not welcome on treaty 1 territory. We occupied the meeting until the treasurer called the police. Let it be known that the treasurer of the legion sanctioned this meeting and supported the fascists in so far as conveying her ignorant views on immigration and "white replacement"

It is disappointing but not at all surprising that The Belgian club would staunchly support this type of event and from what we have learned in the past 12 hours is that this is not the first time such event has happened there. We have received word that other anti immigrant, "patriot", men's right's group and nationalist groups use the venue regularly taking advantage of the members only policy that is enforced at their convenience.

The meeting itself was a complete failure at the moment of confrontation only 3 people showed up and we are assuming the treasurer was in the meeting as well.

About half a dozen police officers and 3 police cruisers on site along with Antifascists outside and media there prevented anyone else from attending the meeting. But this is not about the pathetic attempt of a delusional individual trying to sell an ethno-state. This is about a venue that this community uses for events, socials and very ironically is a Folklorama venue. The responses we have received from The Belgian Club's management have been unsatisfactory and furthers our belief that the management of the Belgian Club is fully aware that far right meetings do happen there.

White privilege is holding white nationalist meetings then thinking it's ok to be part of Canada's largest multicultural festival.

We urge folks to contact Folklorama and inform them of this, boycott any events at the Belgian Club and encourage others to do that as well.

If you have any information regarding the names of the individuals in this picture please let us know. Stay tuned for video.

Big salute to all those who showed up yesterday and those who help us spread the news of the Belgian Club's not so secret fascist leanings.

Stay tuned for an event, Antifascists will be at the Belgian Club during Folklorama to let folks know that they only support multiculturalism when it is convenient for them and they should be boycotted, shamed and be held accountable for allowing such meetings in our wonderful city.

In response, the Belgian Club has apologized for hosting the event and stated that a board member has resigned:

A board member of the Belgian Club of Winnipeg resigned after the club was the site of a planned nationalist rally on Saturday.

In a statement posted on its website, the club apologized for hosting the event, organized by the Canadian Nationalist Party, and said it doesn't reflect its values.

"In early July a junior member of our staff took a booking from an outside organization without fully realizing who or what the Canadian Nationalist Party represents. We realized too late that this group did not represent the views of this club," the statement says.

"Regrettably, during the ensuing protest [Saturday], one of our board members expressed her personal views that do not represent the history, heritage or values of the Belgium Club," the statement went on to say, and the club asked the member to resign, which she did....."The Belgium Club is filled with members whose fathers and grandfathers fought and died in both the First and Second World Wars fighting against fascism and the Nazis to defend democracy and human rights both abroad and here in our own country," the club's statement says.

FF1 responded to the apology and the resignation:

We are happy that The Belgian Club addressed this issue but it will not change the fact that after being informed and shown proof of Patron's facist leanings the meeting still went on no other board members were informed and the police were called on anti racists.

We wish the Belgian Club's members, staff and board become familiar with far-right wing movements in Canada and how to take measures internally to address this growing push by organized racists to recruit vets and active military personnel and to not only show the value of diversity and multiculturalism to both Canada and Belgium but to also champion it.

We would like thank our wonderful community for sharing the posts, calling, emailing and messaging The Belgian Club to let your voices be known you are all amazing. As always thank you for the support over the last few days, this was an exercise in non violent community antifascism and once again #pegcitydontplay

Sunday afternoon a group of Jordan Peterson fan boys came to an anti fascist picnic event in attempt to intimidate, disrupt , Doxx and debate at a picnic full of young children, good food, good tunes, laughter love and community. Antifascist offered water, food and sunscreen and fashion tips. We attempted to educated these young people on why we oppose him. Yes some jokes were made but there was no yelling matches, no blows and Antifascists did not call the police.

We hope those young people took something from what was said and hoe we in one action(picnic) debunk their argument that Antifascist do not engage in free speech.
The fact that they not so convincingly trolled around is very disturbing and creepy.

We have to do a better job of reaching these young folks and educate them as well as understand their concerns and help them see beyond their privilege and angst.

We all love this city and want to keep it as diverse, inclusive and welcoming as possible.
When we hear of any activity, see any propaganda, come across any meetings or individuals we will always track, organize, mobilize, and inform the community . This is the hardest city in Canada for the far right to organize in and we would like to keep it that way. Tonight Jordan Peterson was in town selling snake oil and our friends and neighbours were buying it. We need to do better in reaching out to them. Make no mistake family this very real and it does happen here.We have work to do.

But we know we can count on this city's support, vigilance, militancy and ferocity whenever we break news. This city has shown time and time again.

In the meantime, Travis Patron has been busy polishing this particular turd: 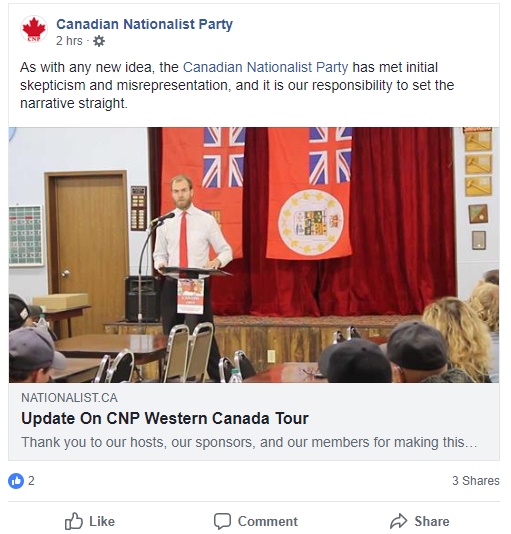 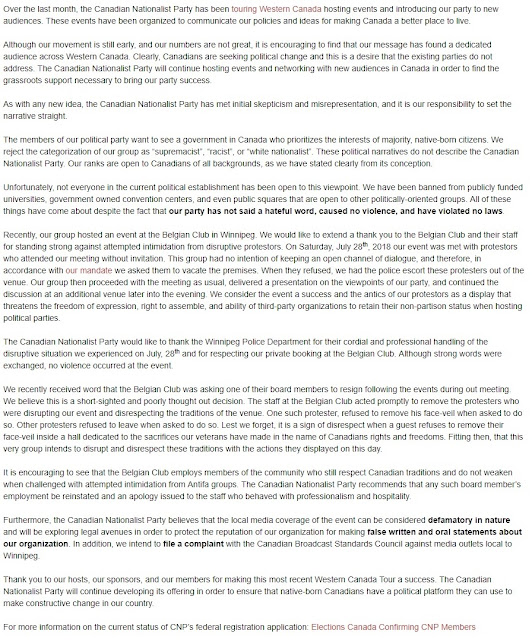