To tell this tale, we're going to jump between Stormfront and Blood and Honour / Combat 18 (B&H/C18) forum discussions.

A month ago yesterday, a Canadian Stormfront member posted a message on Stormfront regarding a shindig that Volksfront Alberta is organizing for December:

While Volksfront itself has been around for a few years, but they're sort of the new kids on the block in Calgary. Of course given their affiliation with the Blood and Honour faction opposed by the Combat 18 affiliated faction, their presence in Calgary might be seen as problematic by the Aryan Guard, most of who's members have put on a C18 patch.

"O'neil bc" was, and still seems to be, very much involved with Volksfront in British Columbia. We don't know if he's in any leadership capacity, but that's not all that important now. The group in Calgary appears to have Scott Sinclair running the show. Sinclair is from Manitoba but has spent time in the Atlantic provinces with the boneheads out there and has been in Calgary for some time now.

So, how did the C18 affiliated Aryan Guard respond on the B&H/C18 forum? Surprisingly, the initial response was favorable:

Interesting, eh? John Marleau, who usually refers to the rival faction as Blood and Dishonour, is okay with a rival group affiliated with the enemy? Marleau explains: 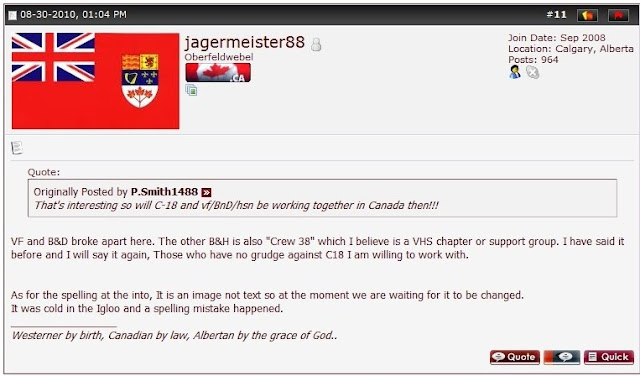 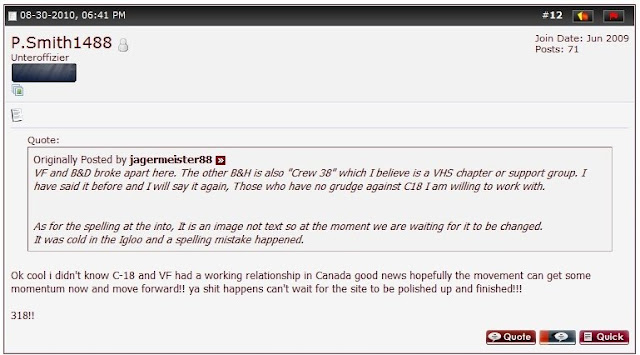 Well that's sweet. The Nazis have decided to stop fighting and play nice. We wonder how long the spirit of goodwill will last?

Oh, you know us far too well, dear readers.

A user ("citywithnopity828") who, while claiming not to be with the Volksfront crew at least seems more sympathetic to their cause, chimed in commenting about how similar the B&H/C18 faction's new webpage was to the pre-existing Canadian Blood and Honour website. It's almost as if Marleau and co. stole the template, sort of like they co-opted other ideas from their hated rival: 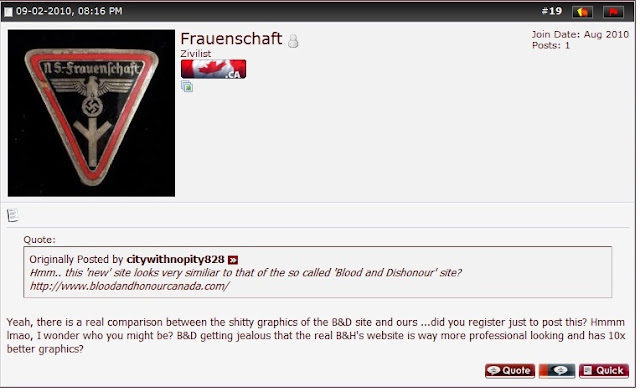 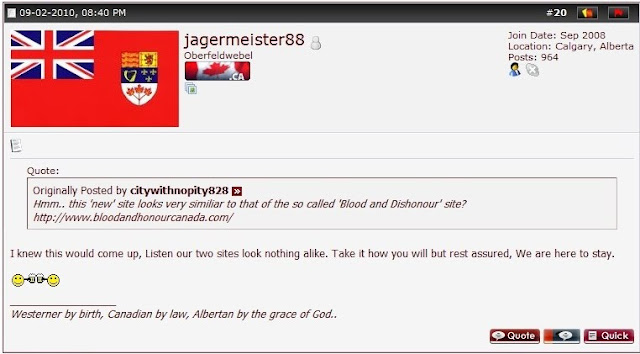 Eh! Mere pettiness. At least the C18 patched Aryan Guard will be able to get along with the Volksfront crew in Calgary. Right?

Yep, not welcome. You see, while this conversation was occurring on the Blood and Honour/C18 forum, the rival Blood and Honour movement, who are very much welcome at the Calgary Volksfront event, inquired about the status of B&H/C18 and their potential presence at the event:

Back on the B&H/C18 boards, Marleau was a bit surprised: 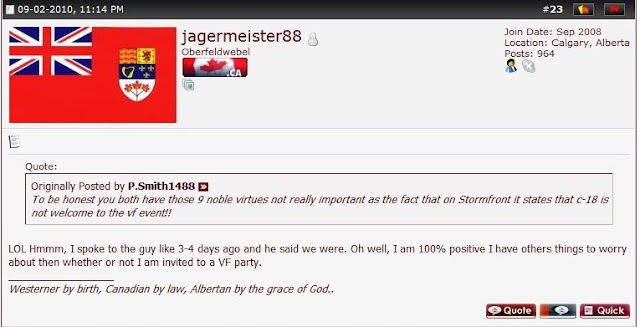 We suppose that does make sense. Marleau and Sinclair are mutual friends on Facebook. Perhaps there was a discussion about C18 attending. However, and when answering "boy white's" concern (he was a early member of the Aryan Guard by the way), the answer seems pretty clear cut.

No soup for you!

Ya, well so what. Who cares about not being invited to a party. No hard feelings:

Well, there you go.

But the discussion that comes later is even more interesting. We'll give our readers a taste of it now.

Remember when Paulie was in BC to welcome the Tamil migrants? Remember how the people standing with him were almost all elderly folks. Some of our readers might have wondered where the BC B&H group was. Marleau certainly wondered: 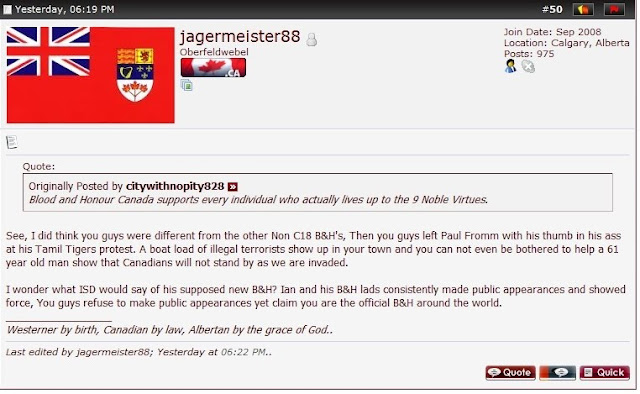 Hey, a fair question from Marleau. So what was the response? 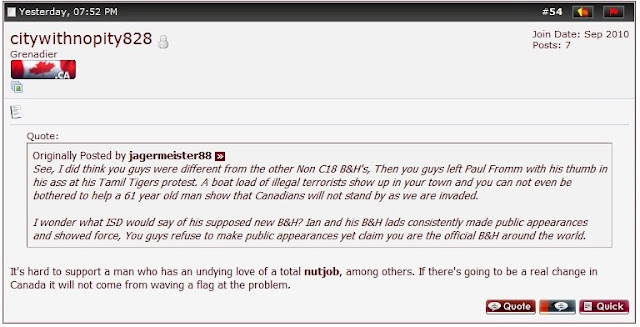 And who is that nutjob our new favorite B&H/C18 poster is referring to?

Why, it's the lovely, if somewhat sociopathic, Michelle Erstikaitis. We had stated that Paulie would lose some credibility amongst his fellow travelers for his support of someone as damaged as Ms. Erstikaitis. Seems like we were correct.

Even those who still support Paulie appear to have some concerns about the grand old man of the Canadian WN movement: 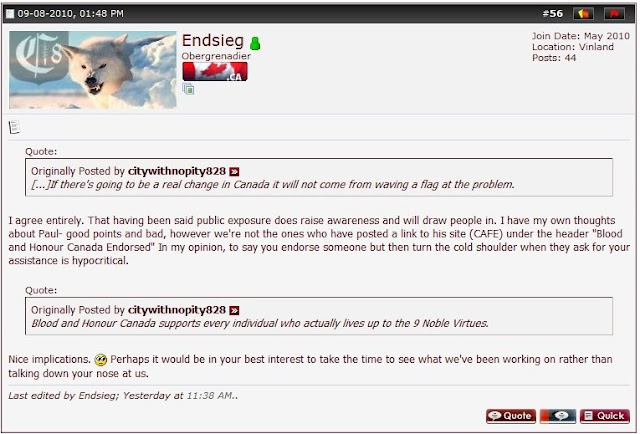 There will be at least one more post concerning this particular B&H/C18 discussion, including the way Marleau (and McKee) provided information to anti-racist groups as well as the ability to maintain secrecy and prevent information being leaked.

FYI, Endsieg, you're all still doing a piss poor job.
Posted by Kurt Phillips at 17:19

OMFG. I didn't think it was possible that white power "politics" could get more ridiculous. It's stuff like this that really makes me think these turds and douche-bags are hardly a threat to society. The more I read about "Volksfront" and "Combat 18" and "Blood & Honour" the more I realize they are just weak ass losers with no lives. Volkscunt is a fucking joke. Conbart 18 is the cock stain of the white power movement. Blood & Honour... lol... the name itself is contradicting as none of their members / freaks have nobility in either trait.

Marleau did raise a fair point. "Where were you when we were being invaded?"

Obviously, the answer is, drunk...
And Paul's weird infatuation with Michelle Erstikaitis just seemed like the best excuse a band of inebriated bushwacking skinheads could come up with to validate their lack of giving a shit about something totally unrelated.

No one has to stand with Paul Fromm to oppose an invasion, or any issue for that matter. I wonder, what did the BC faction actually do about this anyway? My guess is, if they hadn't missed the news, they pissed and moaned and talked about what Hitler would do - like they even have the slightest idea, while Fromm lead a number of groups to gather signatures for petitions addressed to PM Harper. Maybe, and quite likely, Harper doesn't give a shit either, but in my opinion, Paul's efforts have been better than nothing, and this COULD have been just one of the MINOR details in the current circumstances which influenced the Conservative government to begin discussions with Austrailia about combatting illegal immigration. 'Just a thought.

I think Fromm would have been upset had a bunch of skins showed up at his protest, fat chance of being taken seriously and getting interviewed on the news if you're protesting along side a bunch of idiots tattooed from head to toe with swastikas and images of Hitler. As for the rest of this stuff...well it is really puerile, it's like two high school cliques, both do the same shit (petty vandalism), both have delusions of grandeur, both dress the same, but one wants to do things in a different way, and even though everyone knows that neither group is actually ever going to do anything (other than petty vandalism), they still don't want to go to the same party.

What do you mean marleau and kyle supplied info to antiracists? That is a serious accusation. Can you prove it?

So the Clowns aren't invited to the circus!!!

Okay so if B&H is VHS who's Betamax?

Paul is a fucking dirt bag and loves to be seen next to skinheads and any other reject of the WP movement. The guy lives for shock and awe and that is why he will never get anything accomplished.