Curious to Know How You'll Explain This, John

Remember a few months back when the Aryan Guard, in the midst of their feud with W.E.B, posted some pictures of Reitmeier and Johnson cavorting with people were, shall we say, not exactly the Hitlerian vision of Aryan:

Yes, this one is especially interesting. We remember the folks on the Blood and Honour (C18) blog making comments about Reitmeier and his choice of photographic partners. We also seem to recall Marleau writing a thing or two about it. Suffice it to say, they were none too pleased as accusations of "race traitor" were posted.


With this in mind, we were wondering if Mr. Marleau, as one who self-identifies as Combat 18, might explain this photo: 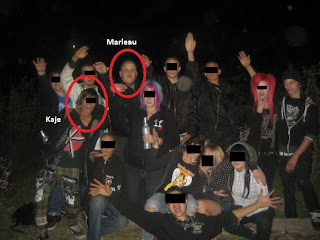 Because we couldn't be certain of the ages of some of these individuals, their identities have been concealed.

Our source stated that "Kaje" is the same individual posing in the previous picture with Reitmeier. Admittedly, the picture is such that we can't really tell for certain (though we don't doubt the honesty of our source), but even if it isn't, the person in this photo, in which Marleau's corpulent figure is also prominent, isn't exactly White.

Soooo, how you going to explain this to your Combat 18 buddies, John?
Posted by Kurt Phillips at 18:32

The kicker in this one is the Dead Kennedys t-shirt. 'Nazi Punks Fuck Off'? Anyone remember that lil' tune from back in the day?

What a bunch of goofs - the whole lot of 'em are confused as hell. However, if you mix stupidity, confusion and hate together and you've got a goofy (but dangerous) powder-keg.

Sorta like the Richard Martin variety that exists in Ontario. Actually, I'm surprised he hasn't gone to Calgary yet. Seems he would fit in well.

Hey
Whatever happened to that Youtube clip of Rob Reitmeier in the Calgary C train station seig heiling that black chick.

Rich hasn't gone to Calgary 'cause his stupid and useless self might still be in jail or trying to beg for the change needed to buy a ticket for the trip. Maybe he can hitch a ride.

haha the guy in very front on the ground with his arms out is my buddy, and he's native. RACE TRAITOR! HA.

For me it's also what looks to be a 7 Seconds patch on the pants. Now I know 7 Seconds were all about unity but I also recall a song called "Colorblind".

But I would still rate the hypocrisy of supposed "race wasrriors" hanging out with their supposed enemy as more egregious than a "fan" of the DKs and 7 Seconds posing with Nazis. At least the music fan can claim to not listen to the lyrics. What's the WN's excuse?

In response to Davegeek, the WN's excuse is meth - and lots of it.

Ok? Pretty simple, Showed up to meet a friend, took a picture with some kids then left. Not a whole lot more to it then that.

FWIW It's true that cage (or Kaje, or whatever) hung around with the AG, and that certainly looks like her. She was there when the AG hassled Food Not Bombs, which was the first time I ever saw any of them.

lol I wonder who he's trying to justify this picture to, ARC or himself

That arm on the right (the one behind the red-haired girls head) looks like it's coming out of nowhere... XD

John, I know first hand you don't only take a picture with some kids and leave. Drinking by the river with non-whites, drug addicts, hippies and queers - yeah, real solid there Johnny Boy.

the person in the second picture isn't kaje, its a boy and an underage boy so i wont post his name.
but I know people who went to school with him and hes defiantly not white.
Neither is the guys at the very front.

Kaje is a very confused individual, and if memory serves me right, she even lived with a few "WP" boys when they first started causing a fuss here. I'm pretty sure one of the people she lived with was kyle. She was at very least partying with them at their house.