Paulie on the Campaign Trail

We have to admit that we are torn when it comes to covering Paulie's futile mayoral campaign. On the one had, we find it funny as hell that he's going to be thumped by an 89 year old woman and that there has been absolutely no mainstream coverage of his efforts. On the other hand, we're providing him with publicity by writing about him.

Aw, what the hell!

Paulie attended the candidates forum where he was able to explain his views to a multi-ethnic crowd who, surprisingly, were not all that receptive to his message. However the best part is how catty he becomes when he writes about how the elderly incumbent picked on him: 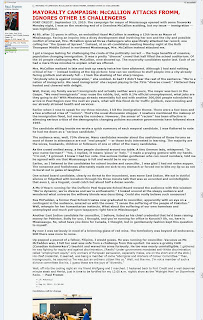 A few interesting observations, at least to us. One is how Paulie pokes fun at the two men who's first language is not English and speak with a heavy accent. It seems Paulie thinks this in and of itself disqualifies them from public office. Perhaps he should then have a word with his fellow traveler Tomasz about his campaign then:

Wow. This might be the closest that Tom has ever come to self-actualization. That's some real growth!

A second observation is that Paulie, who seems to believe that as mayor he'll be able to determine immigration policy for the city, doesn't like being considered a racist:

Earlier when I rose to speak for my three minutes, I hit the immigration theme. There were a few boos and a few scattered cries of "racism". That's the usual discussion stopper. I nowhere mentioned the makeup of the immigration flood, but merely the numbers. However, the smear of "racism" has been effective in silencing serious critics of the demographic changing policies successive governments have followed since 1965.

We can certainly understand why someone wouldn't like being called a White Supremacist or a racist, but if the shoe fits....: 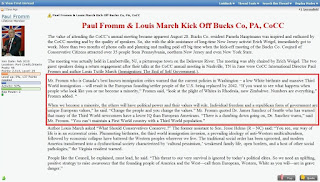 For more information on Paulie's friend John Sanchez, the SPLC has an interesting article on their website.

So, shall we begin taking bets on how many votes Paulie receives? The lead writer of ARC thinks he'll manage to get into triple digits, perhaps approaching 1000. The rest of us think that might be a bit on the high side.

I find it strange that anti-immigration activists act as though never once in the history of time has an immigrant ever created a job, that all immigrants just pop into our country for low paying labour jobs. Honestly, the vast majority of non-franchise restaurants I go to are opened by immigrants, in fact I used to work for Mexican immigrants who had come to Canada and opened up 2 or 3 restaurants and a cafe here.

Mississauga seems to be quite sentimental about their beloved Hazel. It's nice to see members of a community having such a great sense of value for their regional leader.
Paul's efforts May be "futile" in this age of the multicult, when it comes to being elected as the Mayor for the city of Mississauga and implementing a five-year immigration moratorium for the region, but people are listening to him. They're paying attention to this alternate perspective on the issues at hand. As long as this is the case, the possibility of his desired outcome may not be as unlikely as you think, and therefore, his efforts may not be so futile after all!
The amount of neutral to positive feedback he's received during his person-to-person campaign efforts does outweight the negative response so far. He's working hard, and the residents of Mississauga are, for the most-part, enjoying the opportunity to meet with Paul faced-to-face, one-on-one, in order to learn more about his intentions for Mississauga, whether they plan to vote for him or not. Of course, there are several people who strongly oppose with his proposition, but there have been a reasonable portion of residents from various ethnic backgrounds who have been able to view the issues at hand from a mature, selfless and logical perspective, and they wish him good luck. That, to me, appears to be progress for everybody!
Paul may or may not be the mayor of Mississauga one day, but people are listening and he's gained a wide range of new support since this race has begun. Good luck, Paul and Tomasz, and to the rest of the candidates of their regions.

Damnit... LOL
That was legal speech, wasn't it?!

Meghan, could you perhaps be mistaking being polite for being supportive of his views?

An example. The lead writer once met Don Andrews who, at the time, was running for mayor of Toronto. They both engaged in a conversation. The lead writer for this blog didn't rip into Andrews, but was polite. As he walked away, Andrews said in parting, "Thank you for your vote."

Do you think for one moment that our lead writer would ever consider voting for Andrews?

Also, how do you feel about the fact that most of Fromm's supporters, and perhaps Fromm himself, don't consider you to be a real Canadian?

I'm sorry Nos200, I thought for a time that my comment was not going to be published. That's what I was referring to with that statement.

"Thank you for your vote."
Don Andrews, that's arrogance!

You've asked a good question.
To be honest, Nos200, I'm not very concerned about what most of Fromm's supporters would think of me for my often conflicting beliefs and for my heritage [which I might add, I am very pleased to have inherited] because, as I don't think much of most of them, I've decided that perhaps it's better to be detested by those that I would consider to be enemies of goodness and at least, of their own cause as well. That's not only an attitude that I have toward a particular group of people, but rather, for people in general. There are a number of Paul's elder supporters that Paul's introduced to me, who are well aware of my spiritual beliefs and colorful heritage, and they've been some of the kindest, most hospitable and truly caring influential friends I've ever met. When it comes to my friendship with Paul, the result is the same as well.

On the other hand, whether or not Paul Fromm or anyone else considers me to be a real Canadian or not, I know that I am. Another reason why I am thankful that I've been born as I am is that I've been able to view our country's circumstances from a more broad perspective and not only as a decendant of Canada's founding settler people. It's my duty as a citizen to care for my nation. Logically, I do believe that an immigration moritorium is a positive idea. At the very least, I believe that Canada could benefit from immigration reform. As it stands, I believe that Canada's newcomers are poorly screened, and that's dangerous for all of Canada's old and new citizens for various reasons.

I can't believe that no one has pointed out that Paul Fromm himself, is an immigrant (according to his own definition). He was born in Bogota, Columbia no? Unless Columbia's Canada's newest province, that makes him an immigrant, no?

And his parents being of French-Canadian, and more importantly, German and Irish descent. Meaning, not being native to Canada, but to Germany. And Ireland. And I'm pretty sure if you follow his mother far enough down the line, the "French" in the "French-Canadian" becomes kind of apparent.

So, as someone who is essentially an immigrant, and someone who is descended from immigrants, where does he get off arguing against immigration in a MUNICIPAL election. Last I checked the mayor of Miserysaga has no power to supercede the federal government...

With any luck, Missisauga'll show him exactly what they think of him with 0% of the votes come election time...

But please, prove me wrong.

Sonofabitch! He is from Bogata! Well maybe there is something to anti-immigration ideas after all. Howzabout we try getting rid of him first, you know, as a test case?