So, who's announcement has garnered more media attention? Not Paulie.
So far, only one mainstream source has reported anything concerning Paulie's announcement that he was running for mayor. That left Paulie to claim his appearance on James Edwards' radio program, "The Political Cesspool" with its 100s of listeners (okay, there might be a few more than that) as being a significant announcement: 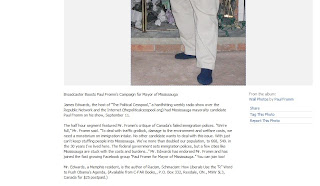 A few points that we take note of are that 1. the Facebook group in question has, as of this writing, 131 members and most of them are from the United States (such as Billy Roper and Thomas Robb) or parts of Canada where the members can't actually vote for Paulie and 2. given that James Edwards (also an American) isn't exactly a household name north of the 49th, we don't think this endorsement is going to amount to very much.

The best part of this isn't even Paulie's write-up about his appearance on the show, but the picture he chose to accompany it:

Black socks, ill fitting slacks pulled up nearly to his chest, unbuttoned denim shirt with just a hint of old man chest hair, and a fireplace filled with refuse (the tire fire the night before was very romantic we understand).

Paulie, you trying to be sexy? You are one suave son of a bitch, man! 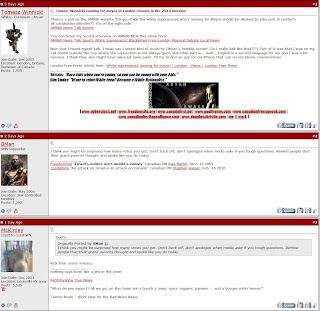 But hey, any publicity is good publicity, including this rather honest editorial concerning Winnicki's efforts:

This mayoral candidate is too hateful to simply ignore

By JOE BELANGER, The London Free Press
Tomasz Winnicki isn't controversial.
He's a pissant, which means he's as insignificant as an ant, a nobody, a man who should be ignored.
And he's a hateful little ant.
That's the nice, publishable stuff I have to say about Winnicki, self-proclaimed "biggest hater in London."
But now that he's trying to go mainstream with his venom, he's a legitimate target, one who should provide some decent fodder for the media over the next few weeks.
And he won't be ignored, at least not by me.
This nobody has decided to make a mockery of London's mayoralty race by joining it. Ironically, I consider Winnicki and his candidacy a blight on democracy and the right to free speech.
Well, when you enter the political ring, the gloves come off.
Yes, we all have to tolerate the absurd at election time, people running because they need a job, they want to see who cares about them, they need their ego stroked or poked, or have nothing better to do.
Occasionally, someone comes along who truly believes they have something to contribute if elected.
Most never walk the talk. Their single contribution to the community is getting their name on the ballot, unlike many legitimate candidates who spend years volunteering their services to various organizations and charities, attending meetings, learning the political process and then opting to participate.
Winnicki is the worst of these wannabes, a hate-monger.
When he announced his candidacy, Winnicki said, "Controversial? Absolutely. (But) anything is controversial now. Just about anything -- they say this guy's controversial, that guy's controversial. You can say that about anybody."
Yes, you can. But what you can't say about most people is "this guy's a white supremacist."

You can say that about Winnicki.
When asked why he is running, Winnicki told a Free Press reporter he's not prepared to answer such questions, yet. Oh, we'll have to wait for that no-brainer. Tough one, eh, Winnicki?
Everyone deals with racists differently. Some cower; others shun or simply avoid them, leaving the room or the building, perhaps even the neighbourhood.
Then there are those who don't leave the room. I am one of them. Throughout my adult life I have challenged anyone who uttered a racial slur or joke in my presence. I've challenged them in bars and had them removed, or embarrassed them until they left.
Then there's the legal option, which Ottawa anti-racism activist Richard Warman took.
It was Warman who first complained to the Canadian Human Rights Commission in September 2003 about Winnicki, who used the Internet to post calls for a so-called holy racial war, and the elimination of Jews and blacks from Canada.
The commission determined Warman's complaint had merit, held a tribunal in April 2006 and ruled the messages contravened the Canadian Human Rights Act because it exposed certain groups to hatred or contempt.
But before that ruling, the commission got the federal court to issue an order for Winnicki to stop posting messages until a ruling was issued.
Winnicki didn't and in July 2006, the court sentenced him to nine months in jail for breaching the order and the racist served time in London and Penetanguishene until September that year when his lawyer managed to get a stay pending an appeal.
Meanwhile, the tribunal ruled Winnicki violated the human rights act and fined him $6,000 while ordering him to pay an additional $5,500 in damages to Warman, describing Winnicki's Internet postings as "vicious and dehumanizing."
Oh yeah, and according to the Wikipedia free encyclopedia website, in September 2004 Winnicki, in Toronto for a rally in support of German neo-Nazi Ernst Zundel, was in a car pulled over by police who found throwing knives, a bow and arrows and body armour inside. He eventually pleaded guilty to weapons charges and received a conditional discharge with probation for six months.
Nice guy, eh?
Well, I certainly don't expect everyone to treat Winnicki the same as I, or Warman, would.
But I am urging everyone not to ignore him. If Winnicki does manage to get an invitation to attend a debate or election-related event, I urge everyone to challenge him, question him, heckle and ridicule him for the beliefs he espouses with the kind of hate few Londoners share or possess.
It is silence, fear and indifference that allows racists to spew their hateful messages. We shouldn't -- we can't -- be silent when one of them tries to hijack, manipulate, or join our political system.
E-mail joe.belanger@sunmedia.ca, or follow JoeBatlfpress on Twitter.
So, thus far, Tom Winnicki is beating Pauli in the press coverage. But either way, neither man is coming out looking all that good.

As we wrote earlier, this is going to be so much fun.
Posted by Kurt Phillips at 23:19

I almost pissed myself laughing at that photo. An discarded Tide box in the fireplace? A porcelain cat above it? Unbuttoned shirt? Sweat? Chest hair? Red face (from excessive red wine drinking)?

Oops, there it is. Just pissed myself!

Well, the real problem with those White people who frequent sites like Stormfront is that they are generally well-meaning people, but they have awoken to the fact that Caucasian people are being systematically targeted for extinction by their enemies. This is absolutely horrific realization and it can make our people insane with rage.

Their real problem is that they have not figured out a way yet to fight the system of White genocide, so they tend to express their anger in very inappropriate ways. We are in the process of gathering our people together on a consistent message and pro-White agenda to fight productively against the program of White genocide.

So our recommendation to you is to begin speaking out against the systematic program of White agenda and ways to dismantle it, instead of lending support to this horrid anti-White agenda. If you start supporting young White men in their struggle to fend of their own genocide you will find that they will find more appropriate ways to express a healthy self-regard and pro-White activities.

The Netherlands and Belgium are more crowded than Japan or Taiwan, but nobody says Japan or Taiwan will solve this RACE problem by bringing in millions of third worlders and quote assimilating unquote with them.

Everybody says the final solution to this RACE problem is for EVERY white country and ONLY white countries to “assimilate,” i.e., intermarry, with all those non-whites.

How long would it take anyone to realize I’m not talking about a RACE problem. I am talking about the final solution to the BLACK problem?

And how long would it take any sane black man to notice this and what kind of psycho black man wouldn’t object to this?

But if I tell that obvious truth about the ongoing program of genocide against my race, the white race, Liberals and respectable conservatives agree that I am a naziwhowantstokillsixmillionjews.

They say they are anti-racist. What they are is anti-white.

Anti-racist is a code word for anti-white.