We've mentioned William John Beattie a few times on these pages as he occasionally posts on Stormfront. To give our readers a bit of an idea about Beattie, here is one of his more recent posts:

Beattie's main claim to fame is that, in the 1960s, he was the leader of the Canadian Nazi Party, though he now is the, "leader" of a group by the name of the British People's League, of which he appears to be one of the few members. So, why should we cover this relic of the 60s now?

Perhaps inspired by other recent marches and in an attempt to relive the, "good old days" Beattie is organizing a "White Pride" celebration in Minden, Ontario:

MINDEN, Ont. — A private Canada Day weekend party in Minden, Ont., with the theme "White Village to White Village" is being unfairly portrayed as a white supremacist gathering, its organizer says.

But if his gathering is anything like the 1989 event that drew 80 skinheads to the county, located 190 km north of Toronto, Minden Hills Reeve Barb Reid said the township wants none of it.

"If he's preaching the same message that he did in 1989, his event is most unwelcome," she told QMI Agency.

"He puts out a message that is of interest to a smattering of people … they clearly don't represent our community or our province or our country."

Reid said she will be checking in with the police about the event.

Const. Sandy Adams of the Ontario Provincial Police says the force received information about the league's event and it's under investigation.

"A lot of people are just bored with the usual fireworks, so they want to have a longer stretch because the holiday weekend happens to be three days."

"We're proud of white history. There's an African legal clinic in Toronto, there's a Black power radio station. … It's my hobby. There's nobody parading around in Haliburton County. It's my fun, my fantasy," he said.

The site calls it a three-day music and camping event on 200 acres in Minden from July 1-3. It's only open to friends of the league.

There will also be speeches, the site says, by "well-known patriot whistle-blowing activists honouring our Dominion of Canada's white founding fathers."

The British Peoples League has been a 20-year "hobby" for Beattie. The group's website invites those sick of "sewer city" to resettle in Haliburton County, where his group will help them land a job and find accommodations.

"Not just for whites, but whiter than white," the website says.

In 1989, skinheads from across Canada, as well as national media, flocked to Minden for Beattie's party, which included a cross-burning on his yard.

There was also a strong counter protest by local residents and human rights activists, who gave anti-hate speeches at the Village Green and held signs produced by the Minden Times newspaper that read, "YES. As a citizen of Canada and a member of this community, I believe in equality of all individuals regardless of race, colour, creed, religion or ethnic origin."

As alluded to in the article, this isn't the first time Beattie has promoted a, "Whites" only rally on his property: 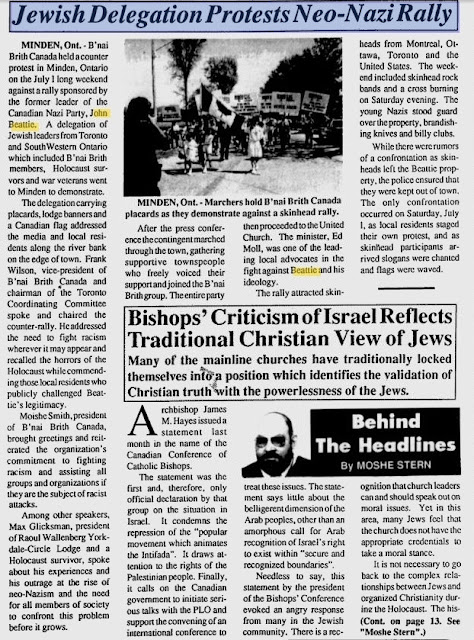 In some of his earlier posts on the racist hate site known as Stormfront, Beattie discusses this rally which occurred 22 years to the day of his 2011 efforts, blaming Grant Bristow for how things blew up in his face when the national media covered the story:

Looking back at some of his posts, and Beattie has never been a prolific poster on Stormfront, it looks like he has been encouraging an exodus of "White" people from the cities into Haliburton County, though we're pretty sure his efforts have met with minimal, if any, success:

Beattie is trying to present his proposed "White Pride" party as just a celebration of European culture. We were especially struck by the following excerpt:

This claim sort of flies in the face of other claims he has made on Stormfront where he not only claims "White" people are superior to other races, but proudly confirms he is a White Supremacist:

This would be bad enough, but Beattie has also repeatedly supported the use of violence to remove, "non-Whites" from North American and Europe and is a staunch supporter of the EDL (when others have criticized the EDL for allowing a few non-Whites and Jews into the group, Beattie jumps to their defence and claims that the EDL is, "using the users):

Mr. Beattie will forgive us if we don't take his claims regarding the peaceful nature of himself and what few members of the British Peoples League who may exist all that seriously in light of these particular examples (and there were more that we could have posted).

What continues to intrigue us is that the old guard of the Canadian bonehead movement are still around and still trying to be relevant. In some ways it is instructive for contemporary activists, as the methods and language used by the boneheads really haven't changed much in 50 years. The following are some of the articles that we were able to find concerning Beattie (all are in order between 1965 and 1970). In many of them, all one has to do is replace, "Beattie" with "McKee", "Canadian Nazi Party" with "Aryan Guard", and "John Ross Taylor" with "Paul Fromm" and one would be hard pressed to distinguish between the events of the 60s and what is happening today: 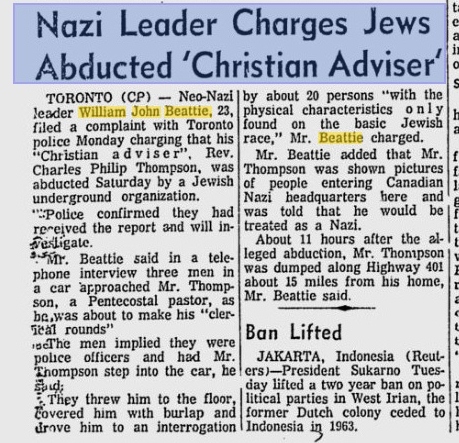 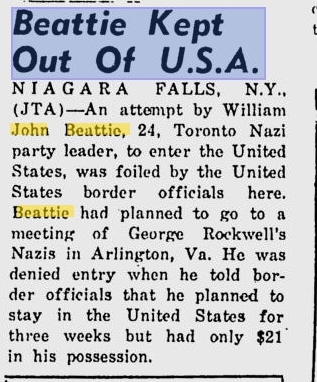 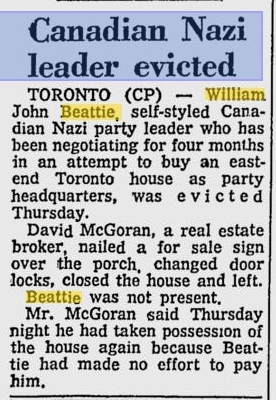 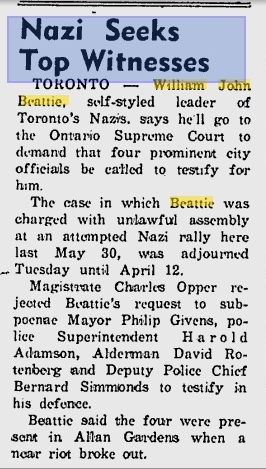 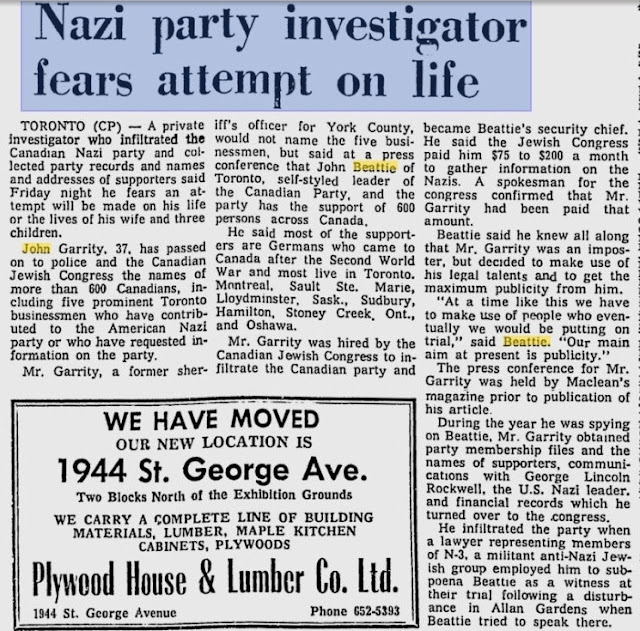 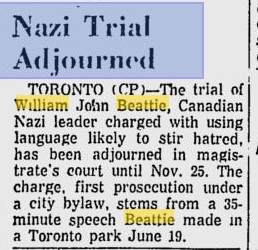 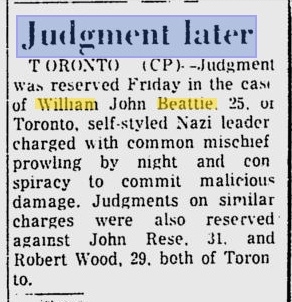 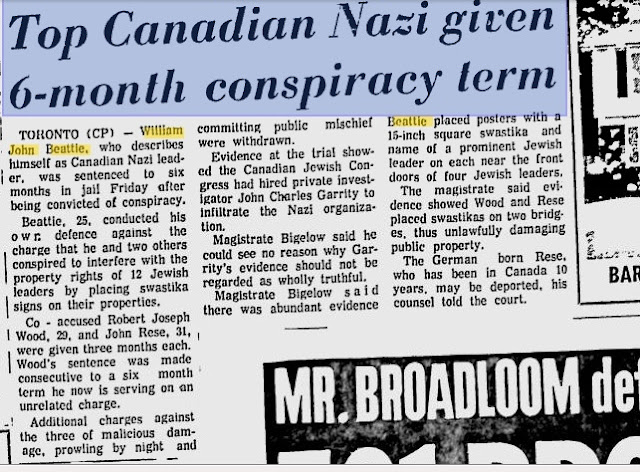 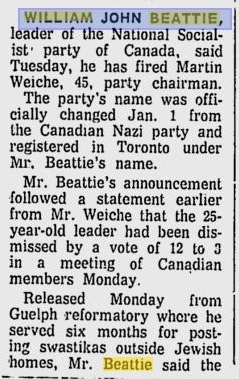 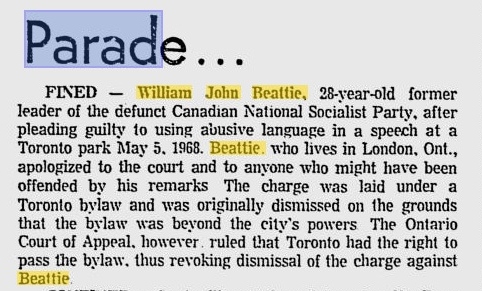 How did he ever manage to pass the good character requirement established by the Law Society? It appeals to paralegals as well, no?

Wow. Things haven't changed much, only by degree. Great post!

Another old man taking a final kick at the cat.

Mr. Beatty is currently running as a mayoral candidate in his home of Minden, Ontario, 190 km NE of Toronto.