First, we've been made aware that someone with the initials "K.S." is interested in contacting us. We are open to a discussion so we ask that you leave your email in the comments and we will be in touch with you (we prefer not to talk by phone).

That said, we were mildly amused when we read one of the latest articles, albeit a brief one, concerning the events planned for this Saturday:


Police hoping for the best but prepare for the worst in upcoming rallies
Global News March 16, 2011 5:26 PM

CALGARY – Police are gearing up for two rallies planned in Calgary this weekend.

Anti-racist groups and white power supporters have planned separate marches downtown for the same day. The rallies are an annual event for each group.

Police are concerned the demonstrations will become violent; on March 21st 2009, police stepped in when the two groups clashed.

Officials are planning for the worst but hope this year’s event will be a peaceful demonstration.

Police will monitor both marches and if the situation escalates more resources will be called in.

Members of the Black Book group are also expected to show up. The group does not back either side but is known to cause problems.

As one of our friends said when he read this article, "I want to know who this shadowy 'Black Book group' is? Sounds like an association of dark sorcerers who start shit."

We assume, though we could perhaps be wrong, that the word they are grasping for is "Bloc" and not "Book." As in "Black Bloc" which is a bit of a boogeyman when it comes to large protests and rallies. This would be in reference to the isolated, but widely reported, incidents during the 2009 march where a small number of individuals on the good guy's side took the opportunity to not only confront the boneheads (good) but also hurl various hard objects at them (not good). It should be noted that the mast majority of the anti-racist protesters were peaceful.

That being said, those few who may be considering going to the rally with the intention of using, let's say soup cans, for any reason other than making a nice, light lunch, might we suggest that you instead donate those cans to the food bank or a homeless shelter? We only speak for ourselves here, but we think it is pretty sound advice.

In reality, the boneheads are growing pretty demoralized by the whole thing, even should they be able to stage some sort of march:

FYI, Reitmeier is referring to both this post made by Natalie S. using McKee's Stormfront account as well as the claim the Aryan Guard co-opted the Blood & Honour name, but we won't go into that now.

UPDATE: Mike "Puddles" Gaio still seems to think that this Saturday is going to be da bomb! 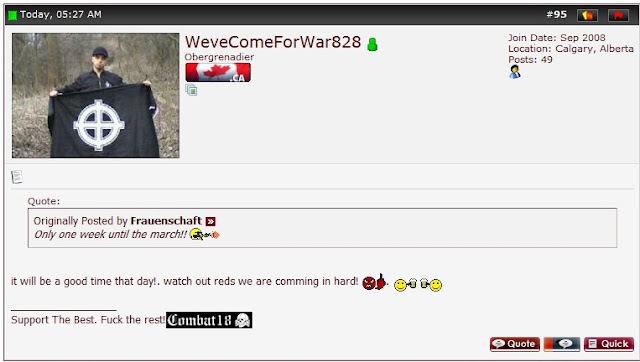 Black Book? Weren't they that Italian dance pop group from the early 90s who had that song "Everybody Everybody"? Wait, that was Black Box. I got nothing.

I now SO, SO want to show up in a dark robe, holding aloft a thick black book, saying nothing. ARC will be in the know, though, so I guess I back the Black Book backs their side. :)

There were some strange folks who turned out in 09, claimed to be "neutral," and tried and failed miserably to get people's attention. Maybe they're the black book?

Too bad the Nazi's weren't smart enough to wear all black (like the Bloc) and march with the Anti-Fa, throwing stuff at their own, in an attempt to bring discredit to the anti-racists.

here's something from the msm

My child and I were almost hit by a projectile in 2009 sent flying by one of those kids in black, while on our way home. I don't think it's worth the joking about what they're called. I have a ton of respect for the anti-racist protesters but absolutely none for those who come to stir up trouble themselves. Sorry but this is a touchy subject for me.