Despite claiming that the members of WEB would not be appearing at the march we knew that they wouldn't be able to keep away. Here is Robert Reitmeier being taken into custody at city hall at around 9:40 am, before the anti-racist rally was to begin at that location: 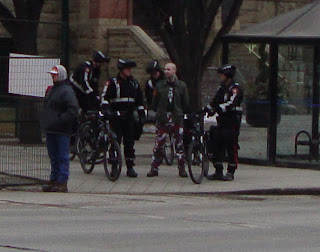 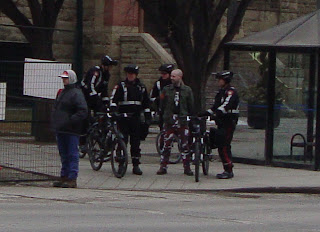 We might guess that Benson, Martin, Brozny and other WEB were perhaps lurking around somewhere nearby as well.
Posted by Nosferatu200 at 15:57

"Calgary's skinhead subculture is gripped by infighting. Another major group, WEB, had said it would avoid Saturday's march. Unlike Mr. McKee, WEB members avoid publicity."
- The Globe and Mail

Lol. Fucking boneheads. You know I'm pretty sure the majority of pictures taken previous years were of WEB "avoiding publicity"

When: TONIGHT (March 19) 5pm
Where: Corner of Macleod Tr and 6th Ave SE

At today's M19 anti-racism rally, an anti-racist activist was detained by police without apparent cause and is currently being held. Police are refusing to answer any questions about the well being of the activist or the charges against him, if any.

Anti Racist Action Calgary is calling for an immediate rally to be held to show support for the detained activist and to demand his release. This event is happening TONIGHT at 5pm.

Well, ain't that a BIG suprise for us all ;)
I'm quite tired of seeing his arrogant, spider webby face all over your fine blog. I'd much prefer the sights for sore eyes that are his wife or Serafini ;)