We were sent a link on Facebook that posted a screenshot of a recent "Edmonton Journal" article regarding the alleged hate crime that occurred in Edmonton last month: 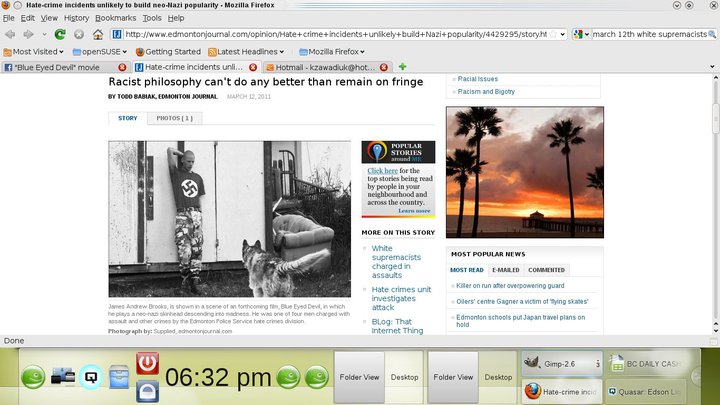 After a brief search, we found the article in question online. Suffice it to say Mr. Babiak does a fantastic job exposing the bankrupt views of these people:

The men were distributing flyers for a white nationalist organization called Blood and Honour, which will hold a rally in Calgary later this month.

Brooks, when we spoke on the phone this week said he was "a well-established artist."

His tone was exceedingly formal.

"I guess I'm someone you'd call a revolutionary, visionary artist. I like to push the boundaries. But my art has nothing to do with what happened that night."

"James is a really intelligent guy, really charismatic," Zawadiuk said. "He has a real screen presence and he was perfect for this, a skinhead character. It's an ode to the 1970s and 1980s exploitation movies, a character study, a man descending into madness. It's just meant to terrify you."

Travis Watzenberg, from Blood and Honour, confirmed that Brooks and the other accused aren't members of his organization.

"We're the figureheads and speakers of the movement," he wrote, in an e-mail, "the intellectual types if you will. Blood and Honour is more of a philosophical group. I don't think these guys were deliberately trying to make us look bad but they've succeeded in doing so."

There is an online photograph of another of the accused, Jason Anderson, posing with a punching bag, a Nazi flag and two pitbulls, but other than that it sounds like those involved with white power would be more comfortable in a chandelier-lit salon, sipping Liebfraumilch, watching kinky art films and reading quotations from Mein Kampf than punching people outside nightclubs.

Some historians find the roots of German nationalism during the Renaissance, when the dominant Italians mocked them for their lack of sophistication. Its eventual peak, as Nazism, was also a reaction to feelings of humiliation and inferiority after the First World War. Hitler was a frustrated artist, a romantic idealist, a loser with a desperate desire to win.

Leaders of contemporary white nationalism have borrowed from Hitler's reading list -misreadings of Arthur de Gobineau, Friedrich Nietzsche and Oswald Spengler -and they've expanded it to include their own versions of decline: immigration, multiculturalism, pluralism, demographic trends and race-mixing. These men are, like their spiritual leader, unhappy and underemployed, the authors of absurd, self-pitying terms like "reverse racism."

The fact is, if you're a healthy white man and you can't succeed in Alberta, in 2011, there's only one person to blame.

In Canada, we protect everyone's right to sit in salons and philosophize, to publish books and make movies about the superiority of the poor, picked-on white race. The philosophy will be as weak, as limiting and destructive as it ever was, as it is for all racial nationalists -white, black, Asian, aboriginal or Arab -for religious or even ideological purity.

When hate remains in the realm of free expression, we're all better off for it. No one is going to rid the world of these ideas. They belong in the marketplace. The trouble is, no matter how inconvenient it may be for the classy intellectual neo-Nazis, it's an inherently violent philosophy. From time to time, young men with trouble finding girlfriends or jobs or hot cars are bound to start believing the speeches.

"We do strongly advocate for freedom of speech," said Const. Ken Smith of the Edmonton police hate crimes unit. "We have no trouble with people having white nationalist views."
Despite the four men charged with hate crimes this week, Smith does not sound worried.

"These guys clearly see this is not a popular societal opinion," he said. "It's a unique issue. You don't see one person, not one, standing up and saying, 'I know why he did that.' No one's with them."

The revulsion we feel at seeing a swastika is more powerful than any arguments a white supremacist can make at a rally. Zawadiuk is on to something: we are terrified, and bewildered. It remains important for us to express, freely and respectfully, that we do have trouble with white nationalist views.

While we really enjoyed his article (which seems to use some of what ARC had written as source material, at least in part), Bernie Miller (who is using the pseudonym "Travis Watzenberg" below) appears somewhat troubled by it: 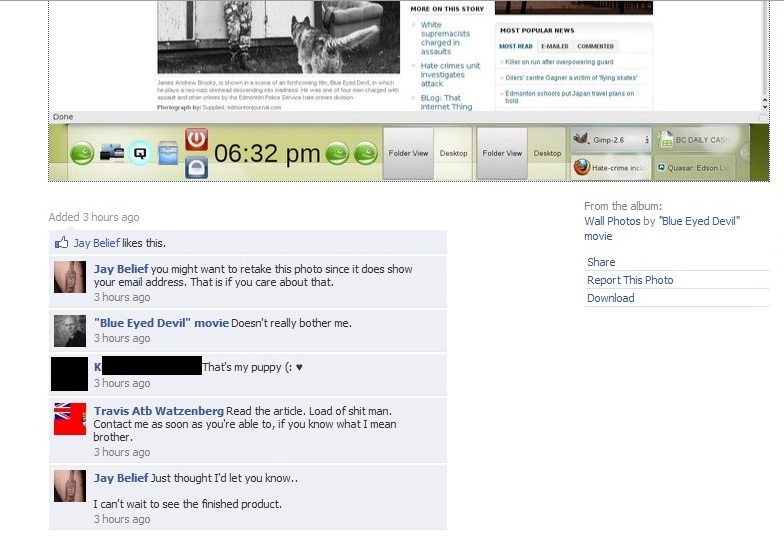 "The fact is, if you're a healthy white man and you can't succeed in Alberta, in 2011, there's only one person to blame."

I hate boneheads as much as the next guy, but it sounds more to me like this Todd Babiuk fellow is actually an elitist asshat with an exceedingly bad analysis of the roots of poverty.

Mr Miller/Watzengerg may want to ask Mark Swanson and Dan Sims how attacking journalists works out. Plus the whole "if you know what I mean" isn't really very subtle if he's trying to avoid the whole premeditation angle.

Just because this journalist points out that white people are extremely privileged when it comes to securing employment doesn't mean he has no concept of how poverty works, and what the root causes are.

More realistically, he's probably read a study (maybe even two!) about how poverty is becoming increasingly racialized, and surprise surprise, those being left behind in the climb to prosperity are people of colour.

Thanks for this, ARC. And thank YOU, Anonymous. I'm going to put elitist asshat on my business card.