So we've been looking at the photos that have been sent to us and that have been published by the media. So far we have been able to identify a few of the 16 (not 30m Natalie) boneheads who were present. They are, in no particular order: 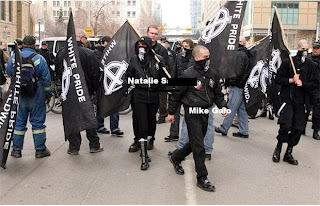 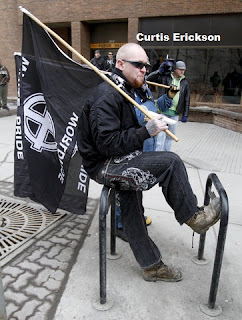 One of our readers has stated that Lee Ebel was also present, but we can't determine this from any of the pictures.

Watching from the side we had Leyton Bertsch. Again, we also received a note from someone who though he or she saw William Miettinen (better known as "Willis") but as the individual was wearing a shirt on we somewhat remain skeptical.

Finally, there are some we recognize, but as yet we have no names. Perhaps our dear readers would like to provide a helping hand? 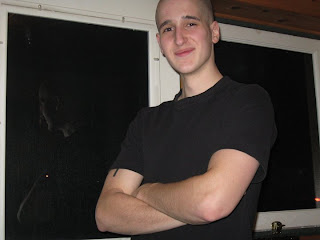 This guy above refers to himself as Jay. 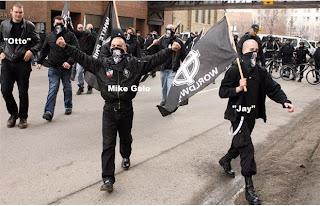 The tall drink of water on the far left of the photo goes by the name "Otto." He was present at the 2008 and 2009 marches and is from Edmonton. As brief aside, we didn't realize Puddles was so.... diminutive. He looks like he could win the lead role in, "Honey, I Shrunk the Nazis." Not that such a movie would likely ever be produced, unless of course Uwe Boll decides to write the screen play.

We also have someone who, looking closely, might be an ATB punk from Ontario who calls himself "Max" (2013 UPDATE: We've learned his name is Max Hynes): 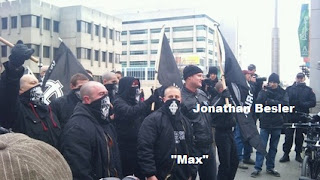 And dude in the St. Patty's Day hat who tried to egg people on to fight him later that evening, if anyone has an idea who he is, we really want to know more about him: 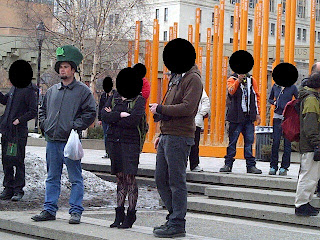 There are a few people we expected to appear but to this point appear AWOL. We haven't been able to pick out Karin Raymond, Shannon Butt, or Jordan Dowe. Not to say they weren't there, but if they were we don't see 'em. We also are surprised that Richard Martin and Andrew Benson didn't go, even if only to watch.

We also wonder where Paulie, who attended the 2009 march, was at this year. We suppose he didn't have a great deal of faith in Blood & Honour/Combat 18/Aryan Guard/ATB/Illuminati/Boy Scout Troop #88/Fauves to pull it off (or he was currently out of their price range). Probably a good decision on his part.
Posted by Nosferatu200 at 19:17

Report-back from today's march in Vancouver: Estimated turn-out of approx. 300 anti-racists, one unidentified bonehead spotted.
It went something like this:
"Why is that guy with the red laces running away from us?"
"LOLOLOLOLOLOLOLOLOL"

Paulie probably spent all his "donations" on some classy red wine and couldn't afford to come to the march....but ya know, it's cuz he's a poor, politically vicitimized white man and he can't be personally blamed or anything ;)

“Jason, come over here. You’re really (expletive) tough back there aren’t you?” screamed one female white supremacist on Saturday.

How many females were there?

Sham-WOW! I have no idea who he is, but I think he lost his Lucky Charms. Ei tatie tatie tatie!

Was there another bombing???

"Otto" is a guy I know from the Edmonton area named Conrad.

I think we learned a valuable lesson: Fromm stays away from places where stuff might get thrown at him. He'd rather leave that to the young and stupid who fund his lavish lifestyle.

"Otto" Is a bonehead from Edmonton. Conrad is his name.

The kid with his arms crossed is Jason Cross or something. They all call him 'newf' and 'newfie'

Whats wrong with the comments

Ya Jay is Jason Cross (aka Newfie) and Otto is Conrad.