March 2011 Bits and Bites: The "Where Are They Now?" Edition

As we continue to creep up on March 19 when the planned bonehead rally may or may not occur (what, with McKee in jail and all) we thought we would take a moment to look back at one bonehead who had fallen off our radar for a while and another who we wish would fall into a hole.

That latter person is Richard Martin. Big, dumb, and ugly has managed to find his way to Calgary and is presumably living with his life partner Andrew Benson. That is until he inevitably screws up and ends up back behind bars himself. 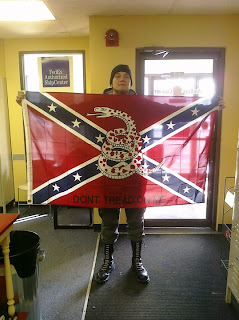 So, are we taking bets on how long before he gets into trouble?

Another individual is one we had been looking at but really haven't written about for some time. James Brooks was once a punk. Then he was a racist bonehead. Then he was a racist (and by all accounts an especially smelly) punk. Now, he's back to being a bonehead, but one who styles himself as a bit of an auteur and artiste. He's also changed his affiliation over that period, first identifying with (though perhaps not a member of) the Aryan Guard, then as the Edmonton WEB contact, and now Blood & Honour/Combat 18/ATB (Aryan Terror Brigade to the person who asked. We know! We're terribly frightened!): 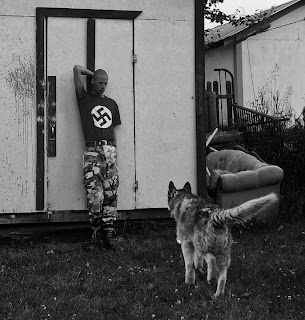 Brooks hasn't had a great month when it comes to dealing with law enforcement. This past Friday he was released from jail for the second time in three weeks. We aren't yet sure what he was in jail for the last time, but the first time was because of his involvement in the assaults that took place in Edmonton which were covered here and on the msm:

Edmonton Police said that they are investigating a possible hate crime that took place last weekend.
According to police and witnesses, three men attacked a young black man near 104th street and Whyte Ave. around midnight Saturday. The attackers are described as skinheads wearing white power insignias on their clothing.
"A group of males in the area were targetting one person in particular because of their racial background," said Edmonton Police spokeswoman Patrycia Thenu.
Thenu said a 30-year-old man has since been charged with assault with a weapon after attacking a woman who tried to break up the fight.
Thenu said the Hate Crimes Unit has been called in to investigate and more charges could be laid.
Posted by Nosferatu200 at 21:36

Thanks for answering my ATB question. I was hoping it wouldn't be something that dorky, but I was let down. ;)

On another note, it makes me SICK that anyone (racist or not) can rape a woman at gun-point and be let off with only serving one year of time, instead of 20...when they had TONS of evidence against him. What is wrong with the legal system??? I hope his ex-bonehead buddies manage to find him and beat the shit out of him.

The black and white photo of James Brooks is from the independent film "BLUE EYED DEVIL". View the trailer here http://www.youtube.com/watch?v=j5HbtfBQ6HE

I bet you guys didn't know Mr. James Brooks is a woman beater. Yup that's right, he decided to throw around my good friend who I cannot name (17). Abused her physically and hit her in the face with a baseball bat. After this occurrence I seen the aftermath of what happened.

Oh and I'm pretty sure he's a bit strange as he's got a nice description of himself on this website.

and he's owned by this hideous thing...

I was laughing when I saw the part about Richard Martin. It's not surprising that he went to Calgary after he was released from prison. He just seems to do whatever Benson does haha.
On another note, he probably will go back to jail. He is on probation now, meaning that he has to notify his probation officer of any changes in adress........ Which is safe to say that he most likely didn't.