"White Pride" March a Failure? Not According to Boneheads

Hey, we call them boneheads for a reason.

Given about 200 anti-racists and 16 white-pride supporters — with a shared history of confrontations — chose to hold simultaneous rallies, dozens of police stood guard between the two and kept the factions a block apart.

One man, said to be with the anti-discrimination group Anti-Racism Action Calgary, was carrying a hammer and crowbar in a knapsack, Insp. Kathy Grant said.

Robert Reitmeier, said to be an original member of Aryan’s Guard, was arrested on outstanding warrants.
The anti-racists met at city hall carrying placards as passing motorists honked horns and gave their thumbs up.

Not long after, a small contingent of white-pride supporters chanted as they marched towards the group.
Longtime anti-racist activist Jason Devine said the rally was to “celebrate diversity and protest racism and discrimination.”

“I think it is really disgusting to have this in downtown Calgary,” said university student Tonie Minhas.

One white-pride demonstrator, who spoke under the condition of anonymity, said accusations of racism and violence are “manufactured,” and he simply wants to be free to be proud of who he is.

“They can have black pride, Native pride, but you can’t have white pride,” he said.

“All I want is the right to be proud of my culture.” 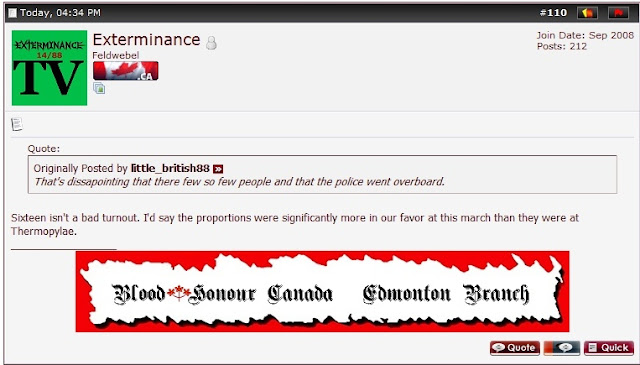 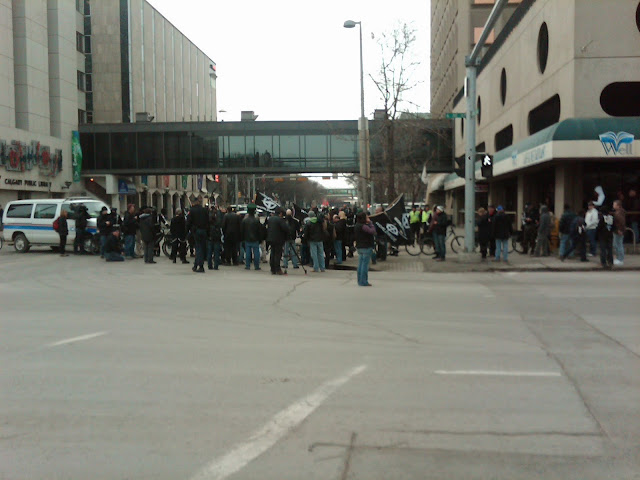 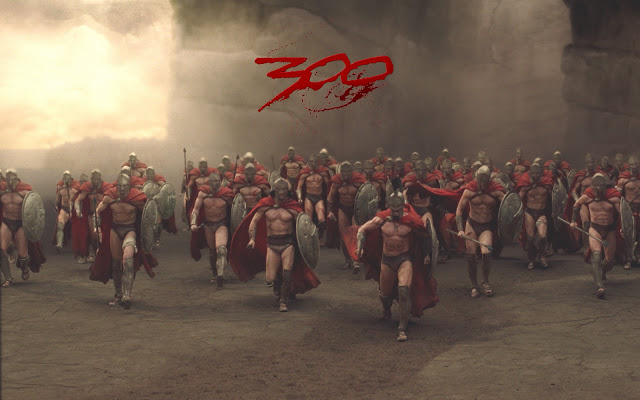 So, help us out Bill. Does this make Natalie "Leonidas" because she led the 16 and Kyle "Queen Gorgo"? 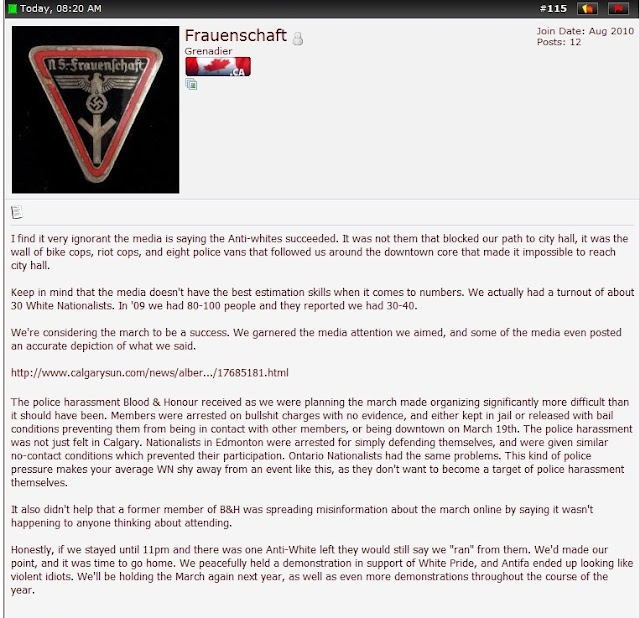 Okay. The numbers game. Even before the msm started publishing their numbers we were receiving reports that there were between 12 and 15 boneheads. And looking at the pictures that have been posted by the boneheads themselves show there sure as hell were not 30 people marching.


But we do find it interesting that while trumpeting the march as a success, she also goes to great pains to justify it's failure. The police were harassing them. Members were tossed in jail on trumped up charges (McKee, who pleaded guilty to what he was accused of and Hamelin who violated the terms of his probation) or for merely defending themselves (against shovel-wielding women who for some reason were carrying shovels while clubbing in downtown Edmonton). Former members (Marleau) sabotaged the march. The media was against them. The anti-racists proved to be violent (one arrest, though the individual was soon released).
Try harder Natalie. You ain't fool'n no one.

Again, and just to be clear, Noble is comparing this: 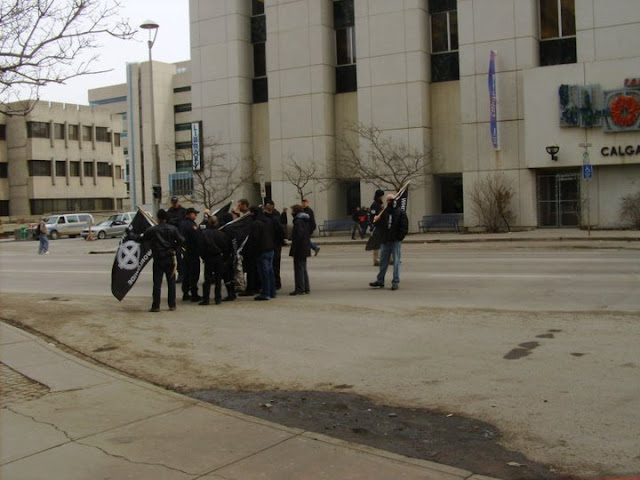 Okay, to be fair this last picture would have been from the Battle of Plataea, but the boneheads wouldn't know any better.
Posted by Nosferatu200 at 15:00

Ohhh natalie...you silly little girl. Instead of throwing your life away by being Kyles backbone, why don't you use the education you work hard to achieve to better yourself?

You clearly possess a brain- try using it!

NOBLE wasn't even at the March. Clearly he can only fight with words on the internet, which by the way he is NOT suppose to be using. The boogie man is still watching you Noble. It would be interesting if the Winnipeg Police got ahold of you eh?

Leave 'er alone. She'll snap out of it. Irony will come along and sweep her off of her feet. I'll bet.

She gives John quite a bit of credit. Who knew he had such pull? You can't relly deny photos. If you see 16, where are the other 14 that were there?

I like how Natalie claims it was all the cops that kept them in line not the anti's... I bet if cops didnt even show, or give a flying f**k about their safety, I am quite positive that the anti's would of showed no mercy. And not only would their little crew of been stopped, but probably killed as well.
So Natalie, consider yourself lucky to have had the cops there blocking your group from the anti's.

On another note, where was good ol' Kat? Was she afraid of showing to a rally where she has had sex with everyone else that attended? *cough*everyone in WEB, members of old aryan guard & puddles gaio*cough*

also, puddles is only 5'5 tops in real life. Hes the smallest kid I've ever seen. I think the blood and honour/combat 18/aryan guard/web/the village people/backstreet boys are all just little runts with small man syndrome... which is why they need to act out.
Most of their hang around girls are taller than them.

fyi there were about 2 - 4 edmonton people at the march. but the 4 who got charged were not there, i think,

I wonder what her mommy and daddy think these days.

Go back to washing dishes Bill and stop hitting the peace pipe so hard.

Why is it that homoerotic imagery in "pro-white" fascinations is so prevalent?