On March 2, 2011, David Lynch of the American Front was murdered in Sacramento, California. At this point we are not aware of any arrests having been made or motive behind the murder. Another person, a 33 year old woman, was also shot, though she is expected to recover. 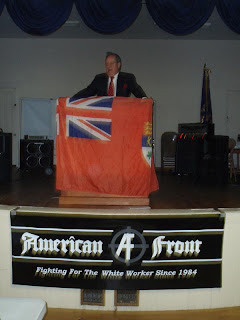 We usually confine our research to the state of affairs in Canada, however this story does have a number of Canadian links. For example Paul Fromm has been a featured speaker at a relatively recent American Front function, as evidenced by the photograph on the right. There are a few other connections. Lynch lived in Canada for a time according to the following story:


Citrus Heights police say they have detained a "person of interest" in slaying of a 40-year-old man who was one of the nation's best known hate-group leaders.
The person was detained somewhere near Highway 50 at about 3:30 p.m., Lt. Gary Hendricks said, after police followed up on leads in the case. He gave no other details.
The slaying victim, whose body was found inside the bedroom of a Citrus Heights home this morning, is believed to be David Lynch, a skilled hate-group organizer, law enforcement and hate group experts said today.
Citrus Heights police have not formally released the name of the man found dead inside a house in the 5900 block of Merlindale Drive, but experts on the shadowy world of white supremacists, racists and skinheads said they had learned the victim is Lynch, founder of the hate group American Front and more recently a unifying force working to unite skinhead groups throughout the West.
"He really was a force in the skinhead world," said Brian Levin, director of the Center for the Study of Hate & Extremism at California State University, San Bernardino.

"The fact that he's dead is a blow to the skinhead movement. He was one of the survivors. Instead of flaming out, he really grew a base and really marketed the skinheads. That's why this is a big deal."
Police still are not saying why Lynch was killed. They received a a 911 call about 4 a.m. from a woman in the house near Greenback Lane and Mariposa Avenue regarding gunshots.

Upon arrival, they found the dead man in a bedroom and a 33-year-old woman in a hallway suffering from a bullet wound in her leg.
The woman is now at Mercy San Juan and expected to recover.
Hatewatch, a blog of the Southern Poverty Law Center, a non-profit organization that campaigns against racism, said law enforcement sources have confirmed to them that the dead man is 40-year-old David Lynch, who the group described as a "clever and charismatic racist skinhead organizer whose history of racist activism dates back to the late 1980s."
"David Lynch is quite well-known in the skinhead world nationally," said Mark Potok, director of the intelligence project at the Southern Poverty Law Center.
The group said that Lynch became eastern state coordnator for American Front, and after the power of that organization lessened Lynch lived in Canada before moving to Sacramento. Hatewatch said he assumed control of the Sacto Skins group and that skinheads are posting memorials to Lynch on Facebook.
But Sacramento sheriff's Lt. Milo Fitch, who ran the department's gang unit from the mid-1990s until 2002, when hate groups in Sacramento were particularly active, said Lynch was not the leader of the group but more of a behind-the-scenes organizer who used his skilled personality to attract recruits to the racist movement.
"He was very prominent in the white supremacist movement and contiuned to remain that way today," Fitch said. "He was originally from San Francisco and then ended up here after living in Florida for a while and bouncing across the country."
Fitch said Lynch had been an associate of two of the nation's most prominent hate-group leaders -- William Pierce of the National Alliance in West Virginia and Tom Metzger of White Aryan Resistance in the San Diego area -- and had served as a technical consultant for a movie on the world of white supremacy.
"He was very charismatic guy," Fitch said, adding that he last spoke to him some time ago when he ran into him one afternoon as Lynch was having drinks. "I could see why people would be drawn to him, the people who are vulnerable, the kids they usually prey upon.
"He wasn't educated but very smart, articulate when you talked to him."
Fitch added that Lynch had held a job for some time working as an asbestos removal technician and had been married and had a grown daughter. He most recently had been living with a girlfriend, Fitch said, and had been quite successful at avoiding arrests by working behind the scenes. "He never got caught," Fitch said.
Levin, who has studied hate leaders for years, said Lynch most recently was involved in organzing skinhead protests in Southern California and that his longevity in such movements was a testament to his intelligence.
"He was part of the racist skinhead worlds, but even more than that he was someone who wanted to create a unified front to protect a nation, and particularly California, that he saw going down the tubes in large part due to demographic changes and the empowerment of minorities.
"He was a true believer. The movement really lacks charismatic leaders, and he was one of them."

There is mention of a girlfriend, which brings us to the third potential link to Canada. In the article there is a group picture in which Lynch is standing next to a tall, blond woman who we think is the girlfriend referred to in the story.

We have a much better picture: 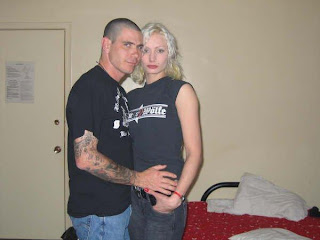 This picture was taken around 2006 in Edmonton where Jennifer, the woman in both this photo and the one who may be the one described in the story we posted, was living at the time.

There has been some discussion over whether Jennifer is the woman who had been shot in the leg. We believed that she was 26 when the above photo was taken, which mean that she could be no older than 31 now. The woman in the article is stated as being 33. Still, we suppose there is a possibility.
Posted by Nosferatu200 at 16:49

The man was a Father and a Friend first. It is sad to see that a man proud of his people died in front of his family. I shook this mans hand and am friends with his daughter. Reguardless of his views on life he was still an American and did not deserve such a fate.

It wasn't Jenn that got shot. She dumped his sorry cheating ass years ago and moved back to Canada.