We received this report of the march from one of our longtime readers. Suffice it to say that the boneheads seemed a little bit deflated by the turnout: 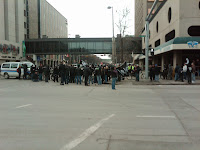 There were a few that I did not recognize. Natalie S. spent most of her time on her cell phone. At I could hear her complaining to somebody on the other end of the phone call about how they did not show up. The Nazis were pretty peaceful for the most part. Soon a bunch of reporters showed up and started taking pictures and interviewing the Nazis as well. 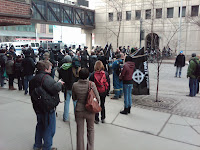 One anti-racist girl and a Nazi guy were arguing for a few minutes. It was nothing really exciting or troublesome. One of the Nazis who I did not recognize kept on yelling about ketchup chips. One police officer seemed to be pretty chummy with some of the Nazis. There were a couple Nazis that decided not to take part in the actual rally but who were on the sidelines. All in all it was a victory for the anti-racists in my opinion because the Nazis did not get to city hall. I even heard them complaining that the police were preventing them from reaching their goal of standing on the steps of city hall. 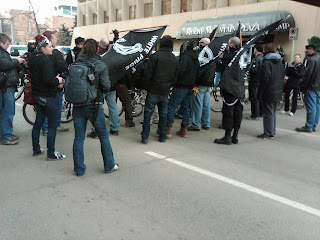 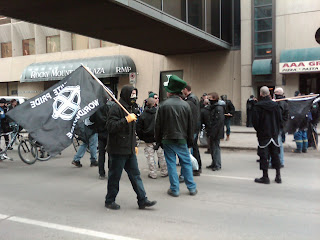 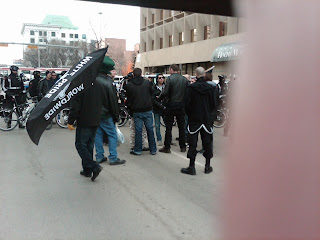 The dude in the silly shamrock hat (see the top photo) ranted to the media that he hates the fact that when he goes to Wendy's, he has to talk to foreigners who don't understand him and whom he cannot understand. After the Nazis left, he went over to the anti-racist side and was yelling at people in the crowd telling people to meet him at Lindsay park's playground at ten tonight to fight. He seemed like somebody who condoned violent confrontation.
Posted by Nosferatu200 at 16:27

Does John "Cheeseburger Terrormachine" have nothing better to do with his time then describe who was yelling what at who?

Its not John that pointed it out Jackasses

Oh, when we published that comment we didn't think it was Marleau, but it made us laugh so it made the cut.

I heard Natalie yelling at Jason devine a lot