We've been enjoying some of the YouTube video uploads regarding the "White Pride" march that took place on Saturday. If the marchers were intent on making themselves into public laughing stocks, mission accomplished:

The completely lovely... er... CompletelyLovely also managed to gain herself an audience of bonehead who exhibited their racial pride by, in at least one case, suggesting she should be hung for daring to mock them (such thin skin folks!): 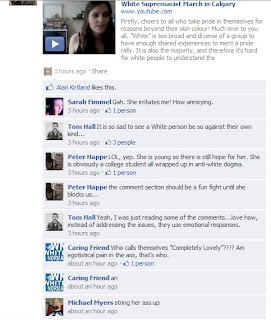 Paulie (who we noticed didn't admonish the individual who wanted to see the young woman harmed) also got into the discussion and congratulated the brave men and woman for crawling out of bed on a Saturday and standing behind the police for an hour or so:

Hmmm, seems that he didn't watch the video. This was all addresses quite well already.

Again though, we're curious to know why Paulie didn't come to this particular rally. Having read the comment above, perhaps he didn't want to be too far away from that red wine of his, since it sort of looks like he's Facebooking (yes, we use it as a verb) and drinking at the same time. An English teacher, eh?

As good as that video was, this one kicks ass (and we aren't just saying that because he used the ARC blog as source material)

So congratulations Calgary boneheads. You are now being mocked internationally.

You rocked our world, Coughlan616.

UPDATE on March 22: Hey, you know how the boneheads claim to simply support freedom of speech and are not in any way violent? Look at two of the posts from Stormfront regarding the woman in the first video and try to believe that claim:

So, beat them when they say something you don't agree with or target them for future murder for the same reason. That'll certainly not make you look hypocritical.
Posted by Nosferatu200 at 22:02

Good job!!! The responses to Completely Lovely have some interesting comments.