Distortionism? What Does that Even Mean?

So we continue to watch the boneheads fall all over themselves to explain why their super successful march on Saturday could have been even more supper successful had everything gone right. You know, except for the multiple arrests that took place before the march. And the fact not a single American came even though many said they would. And that only 16 boneheads participated and the brave, Spartan warriors were held up by some bike cops who eventually called in a bus to take them home where we assume milk and cookies awaited them.

What we didn't speak about in a lot of detail was the lead up to the big event. We did post a note by Mike Gaio who warned the reds that they were, "coming hard." Our friend "Keaton" (William Brant) offered that hopefully the anti-racist would "attack first" which would allow the boneheads to then act in "self-defence":

Endsieg countered that our little home on the web simply wouldn't mention violence committed by anti-racist (fyi, there was none) but he did admit that any encounter was likely to be muted as a result of the pathetic number of boneheads who would show up (okay, "pathetic" was the word we chose to use; Endsieg might disagree with out characterization)

We were going to leave this be, but then Bill Noble chimed in:

Distortionism? We're not entirely sure that is a proper word. Be that as it may, let's examine the credibility of Noble's claim here.

It is Bill Noble's contention that the ARC Collective distorted a specific incident that was captured in a photograph during the 2009 White Pride march. In the photo, we see Brent Goldring in an act that we suggest appears to be the act of throwing something at the anti-racists. Noble claims that this is an act of, "distortionism" and that Goldring in fact is simply deflecting a projectile.

For the sake of this discussion, we have cropped the photo in question to focus solely on Goldring: 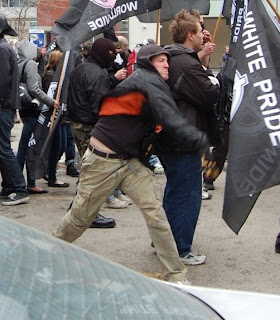 Now dear readers, does this really look like Goldring is deflecting a projectile? Take a look at the stance. But the real tell is the right arm which is blurred, unlike the rest of the body. If he were simply getting out of the way of something being thrown at him, there would be no blur at all. This photo indicates his arm was moving at a high velocity in a forward direction. You know, like he was throwing something. Which he was.

As a comparison, we include the following image of a man pitching. Note what we consider the marked similarities between his and Goldring's stances and forward arm motion:

Noble himself might be accused of, "distortionalism" when he accuses ARC and it's readers of supporting violence. On the day of the march, we posted a reader comment concerning where this individual believed that the boneheads could be found. Noble, reading this comment, claimed that this was obviously a call to violence: 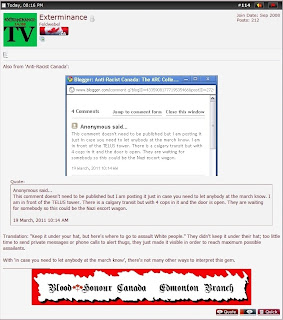 Another translation might be as follows: "Hey, this doesn't need to be published, but if you don't know already I think the boneheads might be located here."

Nothing about violence. Nothing about attacking the boneheads. Simply information that might be useful to people involved in planning a counter rally.

But really, Noble and the rest of the boneheads need anti-racists to be violent. When they aren't they will simply claim they are and assume that this statement is accepted as fact. And when we humbly suggest that the neo-Nazis are the ones who engage in violence, the claims are either dismissed or rationalized (i.e. they were acting in self-defence).

Noble consistently paints his fellow travellers as non-violent people who are simply proud of their race. But we consistently prove that is a lie. Billy is engaging in his own, "distortionism."

where's that fine picture of goldring punching out the guy carrying the coffees? i'm super keen to hear mr. noble's take on that one!