Guilty by association is always the case. A horrible night in which I am now deemed something that I am not by a night of drunken stupidity by me and some newly acquainted individuals, of whom I decided to partake in drink with. Then we have the twisted facts and over embellished stories by the media and others there due to what was said.

So says James Brooks, one of the four men accused of being involved in what has been described as a hate crime on February 12. Brooks evidently posted this on his Facebook profile yesterday and a mutual friend sent it to us.

Apparently it was all a big misunderstanding. Brooks was never a member of Blood & Honour. In fact, he barely knew any of the other three who were involved in the crime.

More on that later.

In the meantime, shall we introduce our readers to one of the other accused in the crime? Yes, I do believe we shall: 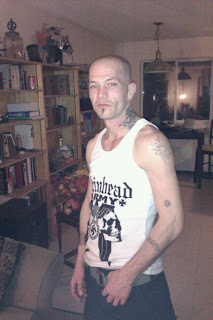 This handsome fellow is Jason Anderson, another of the four accused in the assaults that took place on February 12. He, Brooks and the other two were posting and handing out flyers promoting the "White Pride" march that the Aryan Guard/Blood & Honour/Aryan Terror Brigade/Mouseketeers/PTA/ or whatever the hell they're going to call themselves plan for March 19 in Calgary. When they got bored, they decided to beat a few people up. And then get caught.

Here's another picture of gorgeous: 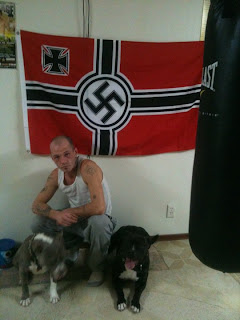 Of course, there has been some minor fallout, as a few boneheads seem embarassed by this attack:

Now don't think for a moment, dear reader, that "Skully 1488" is basing his objections on the fact that a criminal act was committed. Naw! He's just angry that they got caught:

Bill Noble also add his two cents when he expresses both shock (shock I tells ya!) and disbelief that boneheads, who are known to be a peaceful lot, would commit such an act (we might gently suggest he might not be telling the truth here, based on previous knowledge of another event). No, they must have been attacked first and were defending themselves! Or, they were provoked! Yeah, that's it! They were forced to beat up a woman and the man who came to defend her! 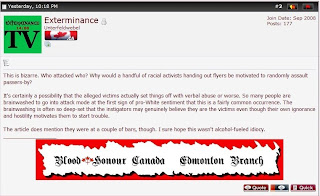 Another possibility is the old, "Jewish conspiracy to make boneheads look violent" line, but that one has been done to death and is boring. We're sure that stale, old argument won't be used.

These people are in desperate need on some new material.

Anyways, an interesting side note. Anderson, one of the co-accused, had another run-in with the police late last week as well: 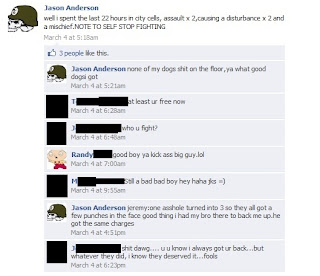 That brings us back to Mr. Brooks who claims to just have been with the wrong crowd at the wrong time.

Here's a fun fact. On his other Facebook profile, Brooks mentioned that he too had just gotten out of jail on March 4 (something we referred to here). Hmmmm, doesn't Mr. Anderson say he had a, "bro" to back him up in his most recent fight?

We're sure it's just a coincidence, right James?


EDMONTON — A string of racially motivated assaults on Whyte Avenue last month left one victim so terrified she feared returning to the strip, and removed family pictures from her vehicle.

After a three-week investigation into the Feb. 12 incident, police said two men and one woman were assaulted and more than 10 people had comments directed at them.

“It is a little concerning. They are from an identified white supremacist group,” said Supt. Ken MacKay, who said the men belonged to Blood and Honour, which is affiliated with a similar group in Calgary.

None of the men had been charged in the past.

After distributing flyers for an upcoming rally in Calgary, a group of men began visiting several bars along Whyte Avenue.

“It was a deliberate, premeditated attack on anybody who did not look white,” said Const. Ken Smith of the hate crimes unit, who said the attacks were otherwise completely “unprovoked” and “random.”

The group stopped at a bar at 103rd Street, where they began making comments based on race and sexual orientation.

Just after midnight, members of the group assaulted a 25-year-old man outside a second bar at 81st Avenue and Gateway Blvd.

At a third Whyte Avenue bar, a 20-year-old woman was repeatedly punched in the face. A 23-year-old man who came to her defence was also assaulted.

The men fled the area on foot but were identified by police investigating the 81st Avenue and Gateway Blvd. incident.

The hate crimes unit took over the investigation that night, speaking to numerous witnesses and five complainants. Police said none of the injuries were life threatening.

“One of the victims was tremendously afraid,” said Const. Patrick Ruzage. “She feared for her life.”
Police said there was a significant paper trail to follow.

The men had been seen handing out flyers at Churchill LRT station at 8 p.m. that night. Transit security officers later intercepted and ticketed the men at the Health Sciences LRT station, which helped investigators identify the individuals.

The men continued on to Whyte Avenue, where they handed out and posted flyers before entering the bars.

The flyers advertised a rally in Calgary, which Edmonton and Calgary police will monitor to gather intelligence. Police are also working with the RCMP on the case.

The three member special investigations unit monitors racist groups in Edmonton, but police don’t believe the numbers have been growing. Police also say it’s rare that these kinds of groups cross the line of free speech to begin attacking or threatening people.

“I hope and believe this was a one off, where this one group went out and decided to do something criminal that night,” Smith said.

Four Edmonton men were arrested last Thursday. They were released and will appear in court on March 17.

Goodman is also charged with uttering threats, while Brooks faces additional charges of assault with a weapon and possession of a weapon.

Though the charges don’t specify hate crimes, police can ask the Crown for harsher sentencing when racial motivation has been identified, Smith said.

“If you’re assaulted and it’s hate, there is no extra charge for that,” said Smith. “The judge determines if he feels it’s a factor in the crime, and if so he will invoke a harsher sentence.”

© Copyright (c) The Edmonton Journal
Posted by Kurt Phillips at 21:02

you guys see this?

lol @ nazis. they should probably read the history of b&h from their own website (28canada) before they spout about how out of character it is for blood and honor to commit acts of violence.