Well, at least according to disgraced former member of the Canadian diplomatic corp., Ian V. Macdonald by way of Paul Fromm: 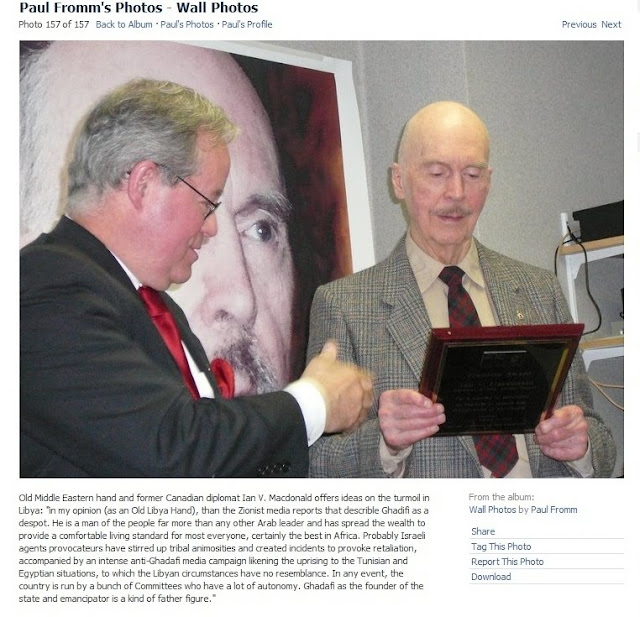 Anyone with any knowledge of the Canadian racist movement shouldn't be surprised by Macdonald's defence of the Gaddafi regime which is currently trying to hang on to power, killing thousands Libyan citizens in the process. In 1987, Macdonald organized a Canadian delegation to Tripoli to commemorate the American bombing of Libya the previous year. Warren Kinsella also noted a link between Macdonald and the Gaddafi regime:

"There is a very wealth landowner in Ottawa, a former high-ranking diplomat by the name of Ian Macdonald, who for many years provided rhetorical and material support to the Canadian Knights of the Ku Klux Klan. And then, interestly enough...Macdonald provided connections between KKK leaders and the government of Libya".

This statement resulted in a Macdonald filing a defamation lawsuit against Kinsella, however Macdonald lost. During the hearing, the following information was revealed:


Ian Verner Macdonald is suing Kinsella and the CBC for $1.2 million over statements Kinsella made on a CBC program, linking Macdonald to the Ku Klux Klan and to alleged Libyan terrorist plots.

Scott Hutchison opened the case for the defence Friday by saying Macdonald was an anti-Semite, a racist and a white supremacist who had "cultivated ties'' with the Libyan government even though it was widely considered an "outlaw state.''

He said Kinsella conducted accurate reportage without malice, and his remarks were within the scope of fair comment.

Friday morning, the court learned Bristow was undercover in the Canadian white-supremacist movement from late 1988 to 1994.

The court learned that while undercover, Bristow and Wolfgang Droege, a neo- Nazi who was murdered in 2006, were approached by white-supremacist radicals from the United States who wanted to find a buyer for a 30-page eco-terrorism plot involving bats, fruit flies and caves.

"They thought it would be of interest to Arabic countries, because Iraq was involved in Desert Storm in '91. They wanted us to market it for them,'' Bristow said.

He told the court Droege suggested Ian Verner Macdonald, a former diplomat with contacts in the Middle East, would be a good connection.

Bristow told the court that he and Droege drove from Toronto to Ottawa, visited Macdonald's home and "provided an overview'' of the plan.

"He (Macdonald) indicated that it ($250,000) was a large amount of money . . . and they wouldn't get that,'' he said. "We indicated that the Americans would like to market the plan to the Iraqis, and he said the Libyans would be a better group to deal with.''

Bristow told the court Macdonald said he would "attempt to get an introduction to an Arab, specifically a Libyan.''

Bristow said he and Droege were unable to get a contact from within Canada, and were told a contact existed in New York City.

"Did you ever seek assistance from anyone other than Ian Verner Macdonald?'' Hutchison asked.

Two other links to Libya include the Nationalist Party of Canada led by Don Andrews as well as the Wolfgang Droege led Heritage Front:

The Nationalist Party emerged from the ashes of the Western Guard, which itself was a renamed version of the Edmund Burke society. This latter group was founded in 1967, and included as members Paul Fromm, Don Andrews, J. Ross Taylor, Wolfgang Droege, and Jacob Prins, the Grand Dragon of the Invisible Empire Knights of the KKK. Early members of the Nationalist Party were Wolfgang Droege and Alexander McQuirter of the Ku Klux Klan. The Heritage Front is in many ways an offshoot of this party, which received thousands of dollars from Muammar Qadhafi starting in 1987. The Canadians present on the 1989 trip to Libya were all affiliated with the NPOC, although several split off to form the Front later that year.

More details about the purpose of the invitation to Libya can be found here:

Because of the Nationalist Party’s positive stance towars the Arab world, in 1987 some Nationalist Party members were invited to a 4-day “peace conference” in Tripoli, organized by Qadhafi. The NPOC received a grant from Qadhafi at that time. In September 1989, 16 Nationalist Party members, (including Nicola Polinuk and Wolfgang Droege, as well as two other present Heritage Front members, James Dawson and Pete Mitreviski) were invited to a celebration marking Qadhafi’s 20-year reign. The idea for the formation of the Heritage Front apparently came about on this trip. According to one source, Droege himself has been part of 4 trips to Libya since 1987. In Unholy Alliances, Don Andrews was quotes as saying the Libyans paid for the Nationalist Party’s plane tickets, feasted them while in Libya, and has given the Party small interest-free loans.

While it would appear strange that Muamar Qadhafi would enlist the support of White supremacists and neo-Nazis, upon further examination, the reasoning becomes clear. For a modest amount of money, members of far-right groups can be used as willing mercenaries who will fight for Qadhafi’s Third Position, an ideology which is anti-capitalistic, anti-communist, and anti-Israel. Qadhafi also strongly believes in separating the races of the world, a stance which has been taken by many White supremacist groups, including Droege’s…

The Heritage Front itself was formed not long after the founding members returned to Canada after a trip to Libya.

So it isn't a surprise that Macdonald is now defending Gaddafi, a man who was financially generous to the Canadian racist movement in the late 1980s.
Posted by Nosferatu200 at 01:20

I've had the incredibly unpleasant fortune of conversing with the diminuative Mr. McDonald (I know, but he really hates being compared to a clown). The self promoting, self agrandizing and unbelievably, still breathing, Ian Verner has spent the last 25 years trying to protect Mr. Quadaffi from persecution. As a $250,000 (US) receipiant of Mr. Q's efforts to promote anti-Israel sentiment in Canada (thought I forgot, didn't you Verner?). His wearisome diatribes in defence of an all white Canada (world?), is neither shocking nor unexpected. That he continues to spend precious funds of the Heritage Front in an useless and comical attempt at convincing all but beer addled SS wannabe's, that "Evil Zionists" control our Government's, communications and banks. Of course, the mere fact that he is able to continually spout his babble in courts, newspapers and those few television shows that haven't a dancing bear, proof against his delusions.

From what I have seen online, antisemites of all stripes can't seem to make up their minds of whether to throw the former/current dictators (IE Mubarak, Gaddafi, etc.) under the bus and write them off as "ZOGs" or to claim that the "rebellions" are the work of Zionist agitators as with this example.