Paul Fromm on Christchurch Manifesto: "I would agree with 95% of it" (and other racist ramblings)

NOTE: This is from ARC's newest writer, officially making the ARC Collective actually a collective again.

Those following along this week know that Paul Fromm is being investigated for publishing the Christchurch shooter's manifesto on his CAFE website. ARC has since learned that Fromm also published the manifesto, and the same preamble, on Canada First. 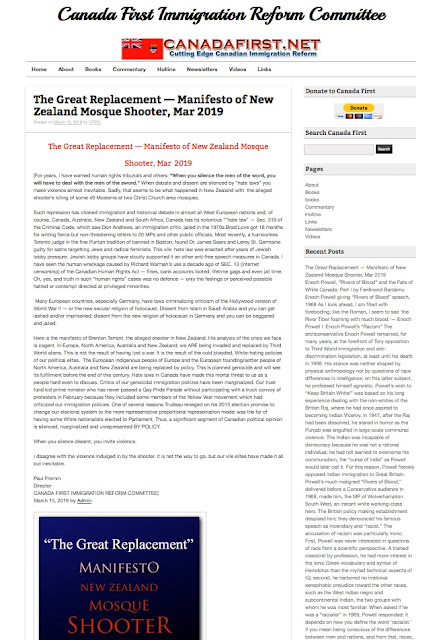 To make matters more...interesting, a video has surfaced of Fromm speaking at an event hosted and filmed by Brian Ruhe in Vancouver on March 16th, entitled "Rewriting Reality: Canada's Political Marxist Elite Loses Its Grip. And NZ Shooting." Ruhe is quite a fan of Fromm's, as discussed here, here, and here.

It's one thing to write a piece on the internet, but it's quite another to speak in front of a very friendly audience. As expected, Fromm has a lot more to say about the Christchurch shooter's manifesto, and other things he considers to be pressing concerns. But first, the manifesto, which, to Fromm, "makes sense:"

He goes on to discuss the theories -- and I use the term loosely -- of population replacement outlined in the manifesto and gives the first part of the document his stamp of approval. However, he believes the shooter did not fully explain the cause of this supposed problem:

And of course, as he said before, he doesn't agree with violence, BUT...

He then moves on to other topics, including Trudeau's supposed fear of Canada's Yellow Vests, who he quite enthusiastically supports:

Perhaps not surprisingly, he denies any knowledge of Yellow Vest members calling for Trudeau's assassination, but then goes on to call the PM a traitor and states that soldiers should go above and beyond a fence or a wall to protect our borders:

On the subject of James Sears and LeRoy St Germaine's recent conviction under S319(2) of the criminal code for promoting hatred against women and Jews, Fromm cannot resist using vile antisemitism himself:

Staying on antisemitism for a moment, in the Q & A, we learn that Fromm distributes British Fascist Arnold Leese's book on Jewish ritual murder, which made quite an impression on at least one person in attendance:

He also takes a swipe at Vancouver police for refusing to "protect" Stefan Molyneux and Lauren Southern's March 15th event, which was cancelled at the last minute. Apparently, diversity policies within the Force are to blame, because, of course they are:

Near the end of his hour-long ramblings, Fromm takes aim at Public Safety Canada for hiring Dr. Barbara Perry, and other accomplished academics, to study right-wing extremism in Canada. In a rant that includes misogyny, homophobia, Islamophobia, and Fromm's egotism, he seems equally incensed that the government is spending money on this project, that Dr. Perry hasn't spoken to him, and that the government hasn't given him the project instead. In the interest of transparency, I've edited together four segments of his rant, presented in chronological order, to cut down on unnecessary blather:

I think he's effectively illustrated why contemporary racists and racist movements in Canada need to be researched, understood, and called out. It's always helpful when guys like Fromm justify our work for us.
Posted by BloodRayne at 19:27

Also, Fromm is an idiot.