Yesterday I posted an article detailing a thread on the reactionary Yellow Vests Canada Facebook page which discussed the murder of 49 worshipers at two mosques in Christchurch, New Zealand. Given what has been published here and by others (Yellow Vests Canada Exposed and the Canadian Anti-Hate Network) readers will hardly be surprised that the thread consisted primarily of celebratory comments with a minority of posters who voiced their disapproval.

Knowing that the thread was being watched and that laid bare the real beliefs of their members, the administrators deleted it as well as others that popped up, however the vitriolic hatred of the membership has been rather hard to contain and ARC has been able to collect more screen shots detailing the reality behind Yellow Vests Canada Exposed: 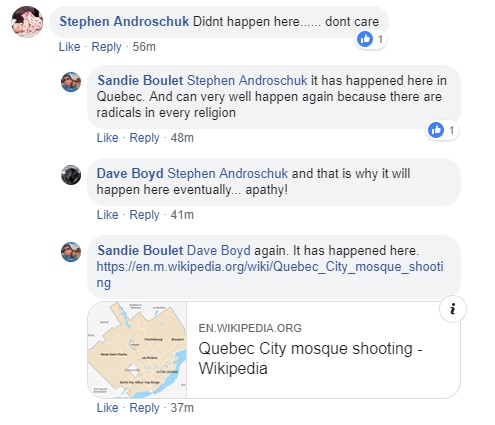 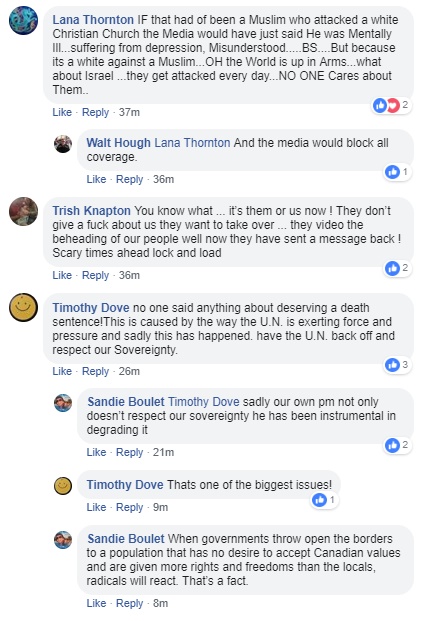 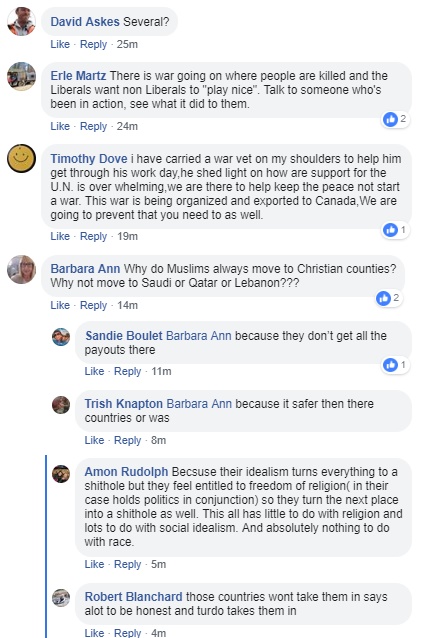 ARC readers know full well that this bigotry, a spreading virus world wide through social media, isn't isolated to the supporters of Yellow Vests Canada or other Yellow Vests supporters in Canada. It didn't take long for other groups that ARC monitors to start commenting on the murder of 49 Muslims. Many of the comments were also celebratory. Some attempted to justify the murders while other started the "false flag" or "the Muslims did it themselves" claims that have become all too common when such horrible events occur. Of course there are the claims that the shooter was actually a far-leftist in order to absolve the right of any culpability. The QAnon fanatics have also gotten in on the act. Finally, there are a few who have actually questioned the presence of mosques in Christchurch and have posited that their presence in the city was a provocation intended by Muslims to claim dominance over Christianity.... because the name of the city is Christchurch.

If they were inclined to do the minimal research required, their minds would be blown to learn there are at least 26 Christian Churches in Islamabad, Pakistan: 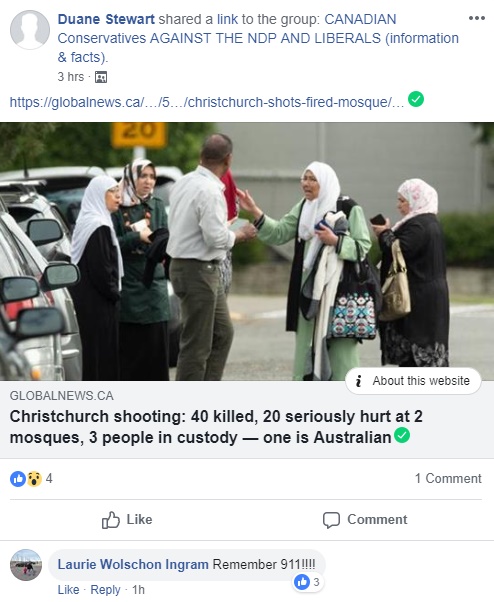 We also have a few of the usual suspects commenting, including Brad Salzberg, neo-Nazi Thomas Trenerry, and an especially hypocritical Ron Banerjee: 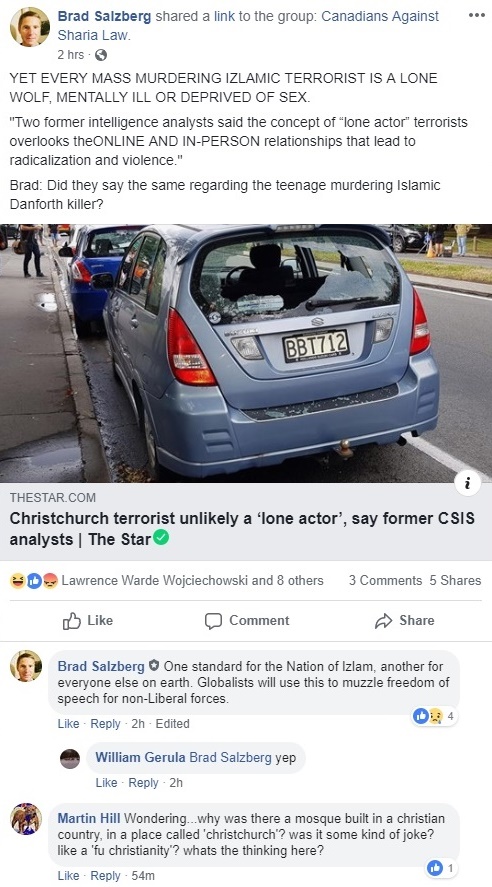 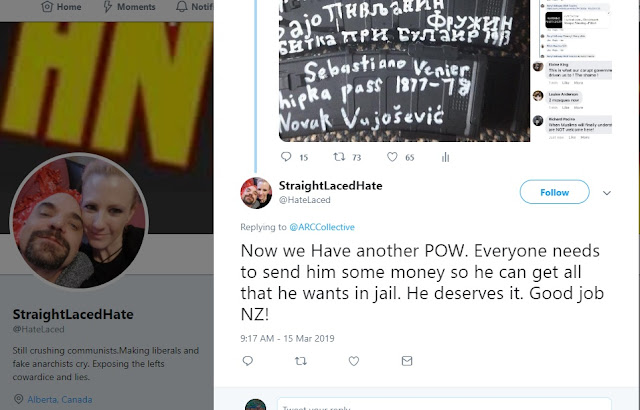 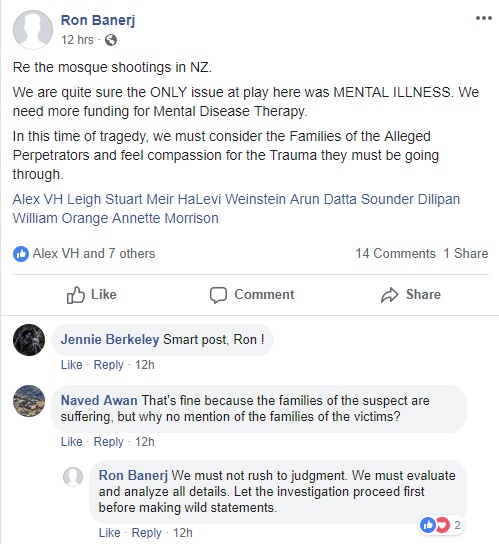 Both the III% militia and Northern Guard offered their $0.02 and lamented that the real victims were being ignored.... not surprisingly they believe those victims to be white, conservative, gun owners: 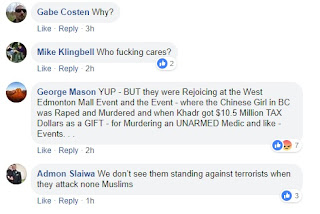 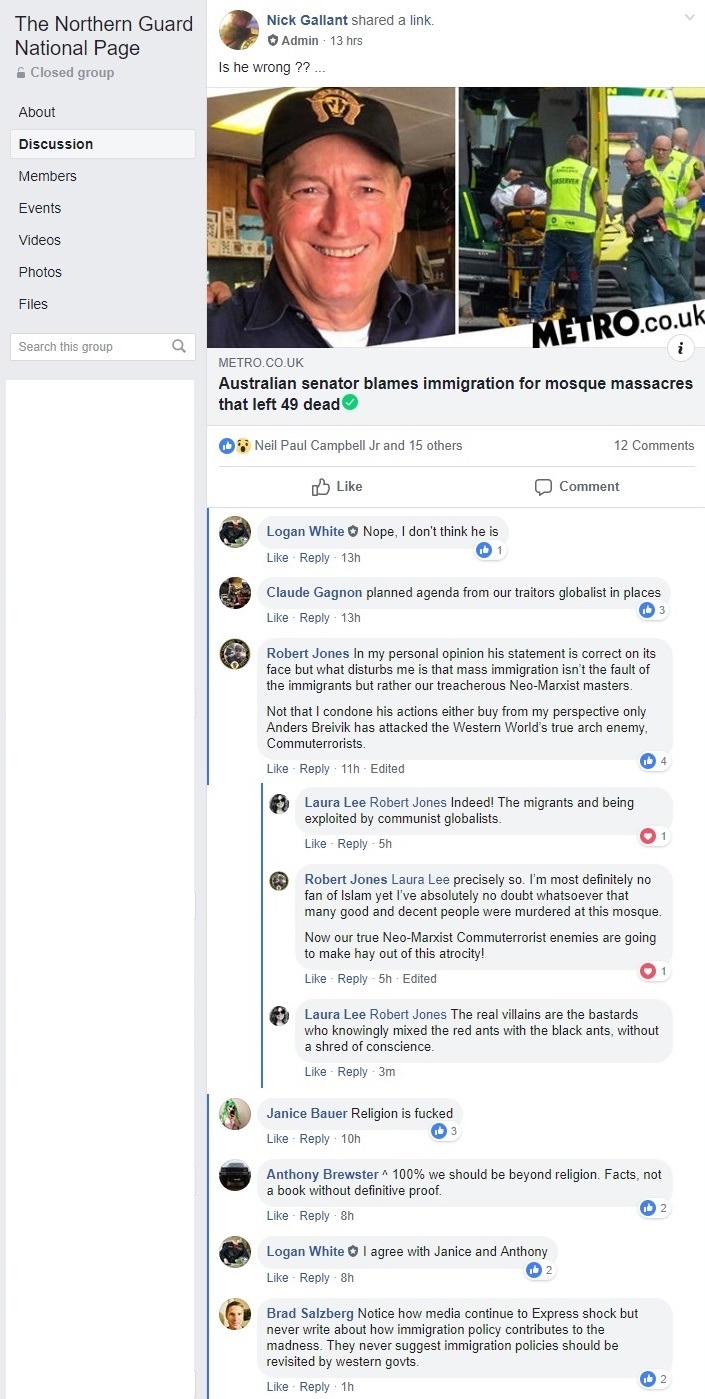 Finally, the Canadian Combat Coalition, which continues to state that it is not to be a hate group, puts the lie to that claim once again:

Which, as a result of the one of the CCC leaders "Dunn Ryan Mclean" and the QAnon conspiracy believers, brings me to Faith Goldy:

Despite her claim to condemn the murderer, Goldy herself engages in victim blaming and the spreading of conspiracy theories intended to muddy the waters: 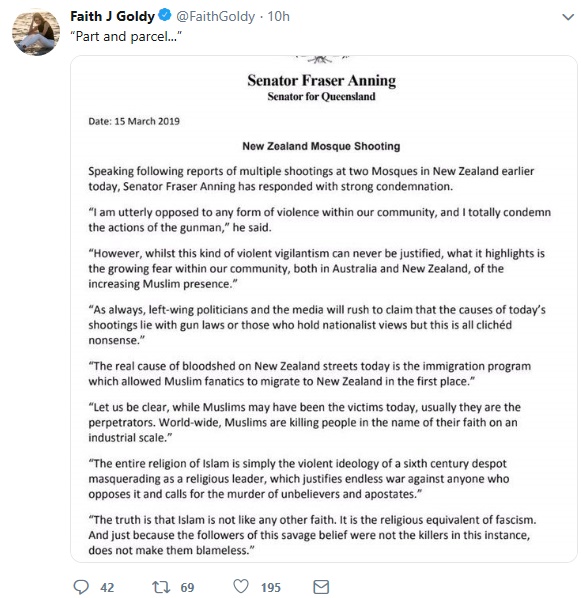 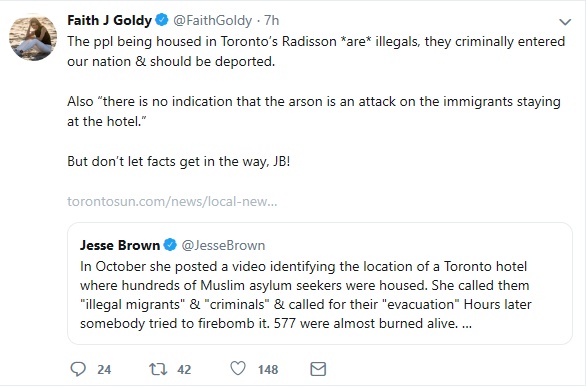 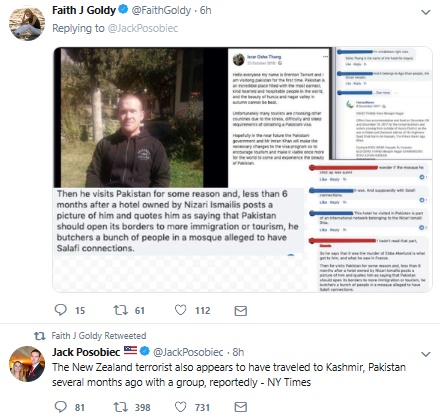 In fact, much of the rhetoric that the murderer included in his manifesto published before the attack on worshipers took place yesterday could have been lifted directly from Goldy's own Twitter account.

For example, while I'm not about to give the murderer a platform, these particular screenshots from the manifesto are rather instructive: 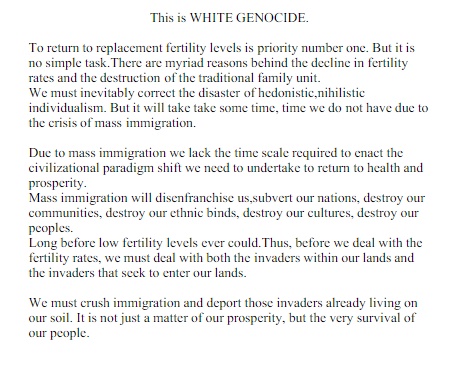 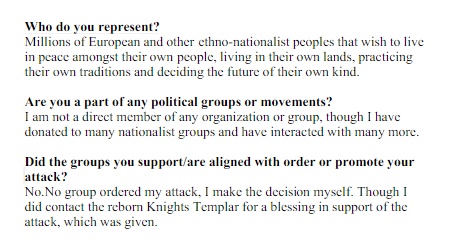 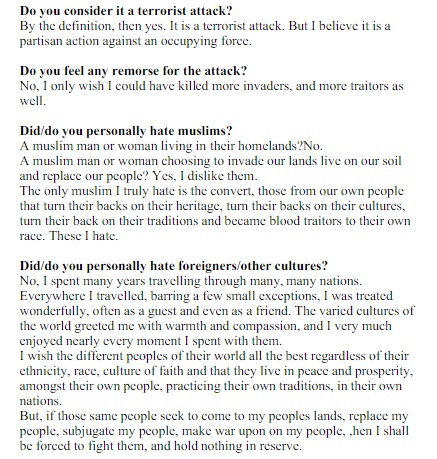 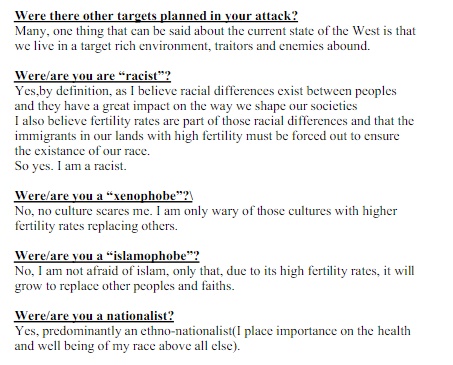 Compare these statements to those Goldy herself has made: 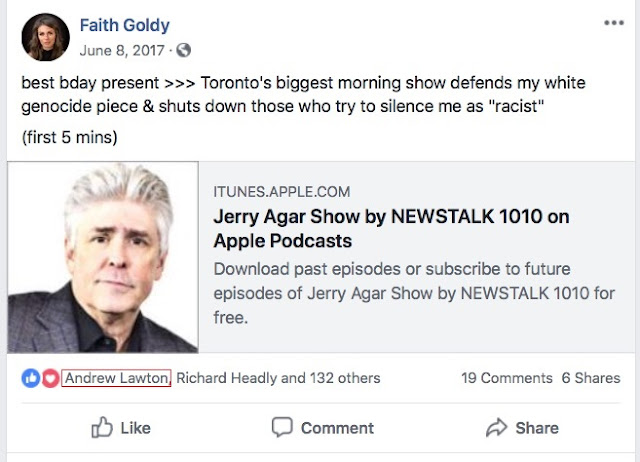 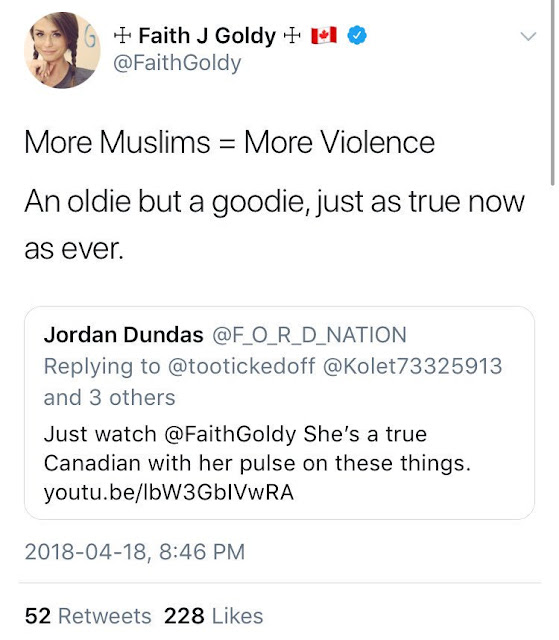 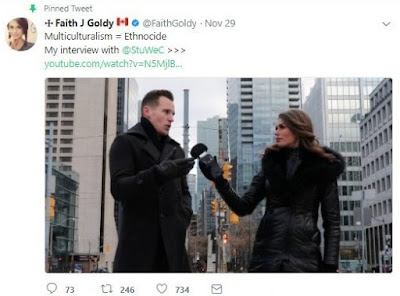 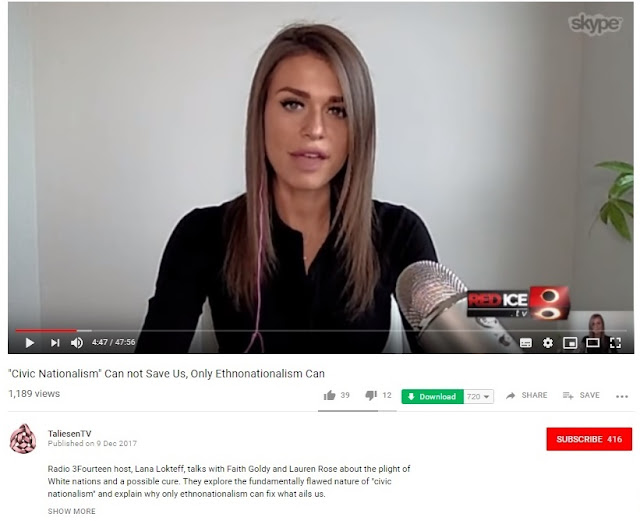 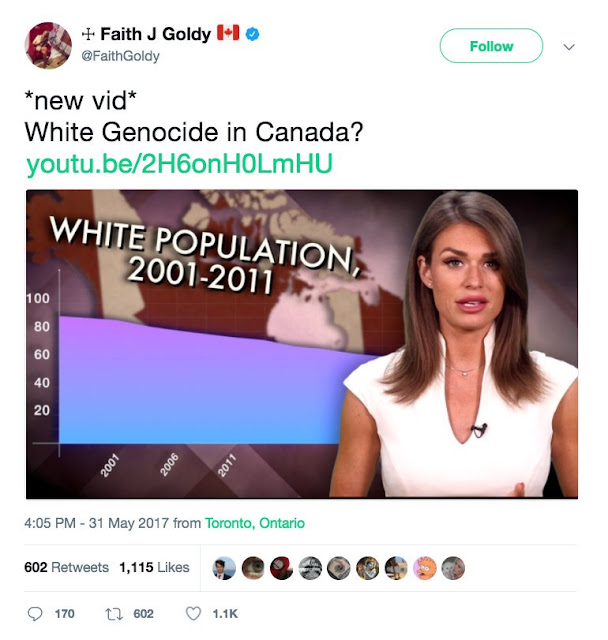 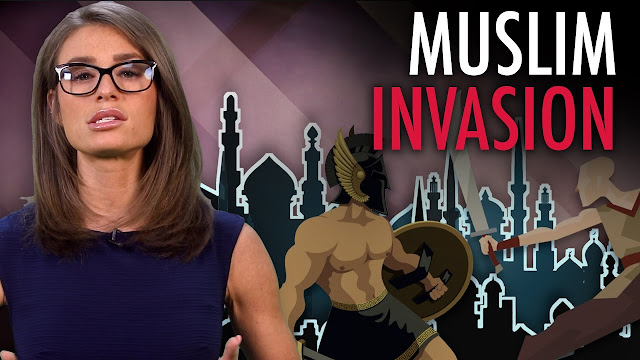 In addition to poisoning the well, Goldy has contributed to the dehumanization of Muslims through.... well.... spreading lies, though someone more charitable than I might use a more PC euphemism.

For example, when 6 men were murdered in a mosque in Quebec, Goldy suggested that the attack was the result of Islamic extremists attacking other Muslims, a narrative that continues to be spread on far-right social media: 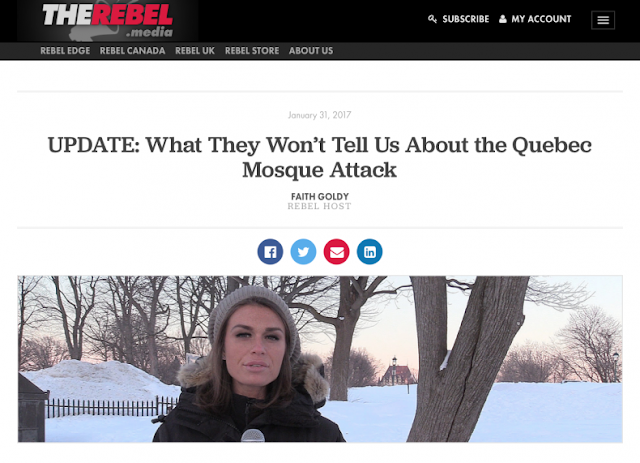 Of some note, the Christchurch murderer seems to have been a fan of the Quebec shooter: 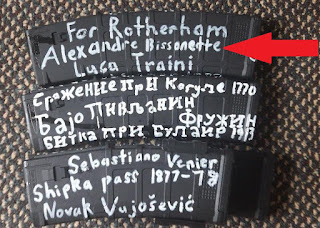 She also helped to spread a false narrative that the man who murdered 10 individuals in a van attack in Toronto was Muslim and ridiculed information, proven to be accurate, that he was a far-right incel: 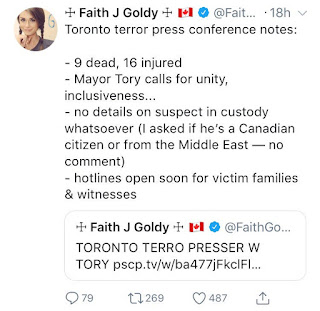 And the claim that Muslims have been given "special rights" when it comes to gun licenses? Also not true, but it didn't stop Goldy from running with a story that has been shared countless times by the Islamophobes ARC keeps an eye on:

I can go on and on and on, but it is rather disingenuous for Goldy to denounce the murders in Christchurch when she has been very much a part of creating the climate in which it could happen: 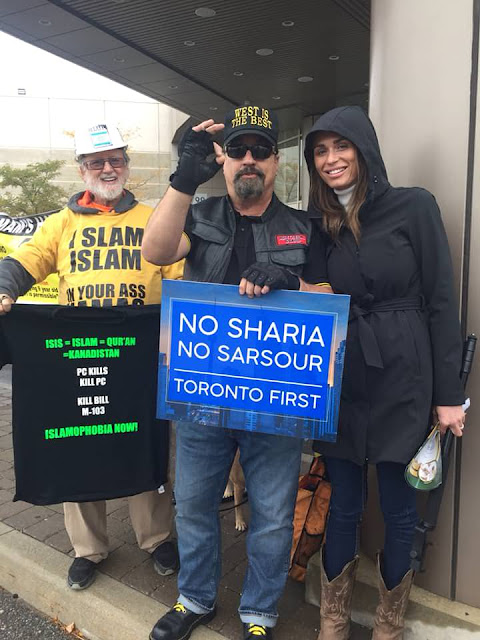 Is Faith Goldy solely to blame? Of course not! She is just a small cog in a giant rage machine in which overt white nationalists, racists, far-right media (Infowars, Breitbart, Rebel Media, Fox News, the Sun newspaper chain/Postmedia, etc), and mainstream politicians dog-whistling to extremists who are part of their base operate:

I would like to think that the #NewZealandTerroristAttack is a wake-up call to all those who have turned a blind eye to the constant casual cozying-up of mainstream conservatives to poisonous white supremacists & their media allies. At least, I would like to think so... #cdnpoli
— Stephen Lautens ☘️ (@stephenlautens) March 15, 2019

I've sent 2 emails & the tweets have gone viral, but Andrew Scheer has provided no response to my questions about if he regrets his appearance at the convoy rally alongside Faith Goldy & what he will do to tackle white supremacy + Islamophobia. My story: https://t.co/wdDgEE6DoU
— Fatima Syed (@fatimabsyed) March 15, 2019

Southern, like many on the far-right, pushes the same 'white genocide' narrative that motivated the NZ terrorist to murder 49 people, including children, at two mosques. She & Stefan Molyneux will share a stage at an undisclosed location in #vancouver tn. https://t.co/AXZf0ZLZuw
— Evan Balgord (@ebalgord) March 15, 2019

This is @jordanbpeterson and a fan during his speaking tour in New Zealand.

You're literally sandwiched between two of the biggest hate preachers in Canada. @FaithGoldy we know, but on your right is Tyler Hall-Kuch, aka Cracker Jack. Read more about him here: https://t.co/1Gw08EttBh pic.twitter.com/mi89Au82Vo
— Zachary Kamel (@ZacharyKamel) March 16, 2019

"Other party leaders managed to name the victims — Muslims — and the beliefs — white supremacism, Islamophobia, the familiar, toxic mix of racism, xenophobia and hatred that so often finds Muslims as its target...Why on earth couldn’t Scheer?" By @acoynehttps://t.co/U6tXQWuExl
— Steven Zhou 周铮 (@stevenzzhou) March 16, 2019

This is not true. @MaximeBernier has commented on incidents in other countries. Around the world, and at home, ppl of all faiths should be able to worship freely and peacefully. Bernier’s justification for his unwillingness to call out violence against Muslims is deeply troubling https://t.co/laMttW6593
— Althia Raj (@althiaraj) March 16, 2019

What do you think the endgame is for Rebel Media posting the address and names of the businesses in a strip mall Omar Khadr invested in? We have seen this script play out again and again. I fear it will end in tragedy. This isn't journalism, it's hate. #cdnpoli #cdnmedia https://t.co/QgvqhhzKHf
— Neil Before Zod™ (@ThatsMrNeil) March 15, 2019

Here is Andrew Scheer standing strongly with the M̶u̶s̶l̶i̶m̶...er...Freedom community, while he stands with Rebel Media. @AndrewScheer actually links to Rebel Media in their post. https://t.co/3VVuF7Y3vG#cdnpoli #cdnmedia pic.twitter.com/NGDHBotvwo
— Neil Before Zod™ (@ThatsMrNeil) March 15, 2019

These are the people that have been embraced by the CPC party and their followers in Canada.#Islamophobia #Christchurch #cdnpoli
— Yvonne☘ (@yvonne4tn) March 15, 2019

Here's the national comment editor for the Sun newspapers arguing that a motion to condemn Islamophobia was in fact a Trojan horse for creeping Sharia: pic.twitter.com/rjGEeOA3d0
— Jonathan Goldsbie (@goldsbie) March 15, 2019

hey @Lauren_Southern where'd your video go? the one about the great replacement? i have a copy saved if you need it pic.twitter.com/exAFhcPX17
— Shaun (@shaun_jen) March 15, 2019