Much like Vancouver and Toronto, it looked like the most recent Worldwide Coalition Against Islam (WCAI) event in Edmonton would yet again fail to feature anyone actually associated with the WCAI. Certainly some of the Canadian Combat Coalition members back in Ontario appeared to be rather frustrated by yet another no-show:

However while ARC initially reported that the racist rally organized by Joey Deluca of the WCAI with participation of groups such as the Soldiers of Odin, Northern Guard, and Canadian Combat Coalition failed to launch, it turns out that they were waiting until they thought there wouldn't be anyone there to spoil their fun:

Ah, there's the casual racism and threats of violence that we've come to expect from Joey.

Later in the video, cut off because Dubois' batter died, Deluca continued his racist anti-immigrant missive referring to immigrants from developing countries as "sewage" and further dehumanizing rhetoric:

Now this sort of turns out to be rather awkward considering Deluca's association with the reactionary Yellow Vest movement in Canada and their claims to being opposed to racism and in favor of legal immigration: 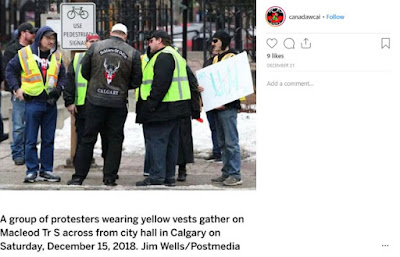 Readers will also remember this video published by ARC on March 16:

ARC has written extensively about Jeff Sharpe in the past. According to our friends in Edmonton, he is currently involved in a power struggle to control the Yellow Vests in Edmonton:

It was really hard to tell with the police lines and people walking down Whyte Avenue. There may have been around 20, but that feels generous.

Les Michaelson and Jeff Sharpe are fighting for control of the yellow vests it seems, so there were a lot of confusion about location. https://t.co/wM6jIyuwLO
— EdmontonAgainstFascism (@EdmontonAgainst) March 30, 2019

He was also involved in promoting the Yellow Vest event that was swamped by counter-protesters earlier today: 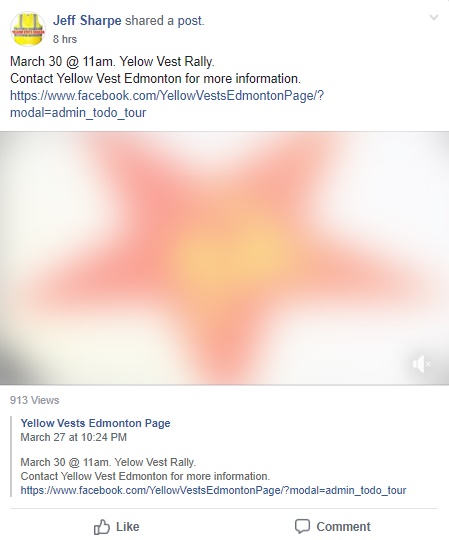 Well isn't it funny that Jeff Sharpe who claims that racism isn't a part of the Yellow Vest protests is present with racist Joey Deluca and the WCAI as well as the Soldiers of Odin, CCC, and Northern Guard:

Dude, aren't you even going to bother trying not to sound antisemitic?

Now, the racists, antisemites, and Islamophobes did discuss the earlier counter-rally and though they attempt to make fun of them with the tired, "mom's basement" and "they had to take mass transit" (which is something many of their supporters likely rely on in major cities so not much of an insult) it is clear they were rattled:

The remainder of the video was devoted to highlighting some of the people who attended including Win Nay, misogynist Adam Stevenson of Onward Christian Soldiers, and a few Northern Guard and Nouns of Odin, one of whom was very proud that his SoO chapter was "Finland approved" which again might be a bit problematic considering the Finnish parent club was started by an overt neo-Nazi:

With knowledge that the bigots would be returning to the legislature, anti-fascists in the city oraganized on pretty short notice and managed to counter the boneheads in numbers that were at first smaller but looked to be growing as more became aware of what was happening:

In the end it was more of a cameo as they spent between 15 minutes and half an hour at the legislature and left before their numbers could again be swamped by counter-protesters:

I'm sure that they will.

Dubois posted a video (must have found a charger) in which he speaks about how clever they are:

Now, while the boneheads were chased off, they did find time to assault some of the counter-protesters:

They did end up regrouping on Saturday and assaulted counter-protestors. Including swinging a flag pole embedded with nails. Police watched, blamed counter protestors, and then blocked counter protestors while the hate groups walked off.
— (((Trevor Riel))) (@TrevorRiel) March 30, 2019


I did see two clips of members of the Northern Guard and Soldiers of Odin shouting homophobic slurs and threats at counter-protesters whom they encountered followed by the assault. There will be more on that, but though more than one bonehead was involved, only one Noun of Odin was taken into custody; I'm not sure if he was arrested or released later.

In any case, I would urge anyone who can to head to the Edmonton legislature tomorrow with the awareness that you might have to move to other locations as the boneheads try to avoid being opposed.
Posted by Kurt Phillips at 18:25