Christchurch Truthers: Denial of Right-wing Violence As A Self-Preservation Strategy

This past Saturday, PEGIDA Canada tried to march in Toronto. It went poorly as the tiny contingent of PEGIDA supporters, Nouns of Odin, Northern Guard, and Canadian Combat Coalition members were outnumbered by between 250 to 300 counter-protesters:

yesterday's counter demo in #toronto was brutally demoralizing for the far-right scum that pegida scraped together. they couldn't march in any direction w/o getting blocked by community members - faith groups, unions, anarchists & socialists, neighbours fed up with this shit.
— Bob Nesta Makhno mistake ☠🏴 (@GilletteMachNo1) March 24, 2019

other than pegida, there were 5 hate groups present: northern guard, C3 (canadian combat coalition), sons of odin (they're still a thing?), JDL (is it still a "league" w one guy?), & wolves of odin (although there was only one member, so maybe "wolf of odin" is more accurate). pic.twitter.com/3IOcjI57JP
— Bob Nesta Makhno mistake ☠🏴 (@GilletteMachNo1) March 24, 2019

Ed Jamnisek was there representing both northern guard & C3. he's the pathetic boomer dude who showed up to disrupt the unite against racism event a couple days prior wearing a maga hat. TPS sure seem fond of protecting this guy 🤔 pic.twitter.com/ITzw08YSaF
— Bob Nesta Makhno mistake ☠🏴 (@GilletteMachNo1) March 24, 2019

a couple of other interesting attendees included an old man who thought it was a bright idea to show up with an umbrella disguised as a sword (& possibly a knife at his waist?) and Faith Grifty's intel teen who was seen visibly shaking. pic.twitter.com/oI8C7wK6SV
— Bob Nesta Makhno mistake ☠🏴 (@GilletteMachNo1) March 24, 2019

ARC hopes to perhaps have a more detailed report later this week, however in the meantime Kosalan Kathir has an excellent thread on Twitter detailing the event my the minute. There is one particular tweet though that I want to pay attention to:

Readers will recognize the first person seen in the video filming himself while walking forward as Rick Boswick. Boswick is a frequent participant in these events often accompanying Sandra Soloman and Derek Storie as well as members of CCC and other hate groups. He is also active in the reactionary Yellow Vests movement, attending their "big" event last month in Ottawa where Storie was filmed with Faith Goldy: 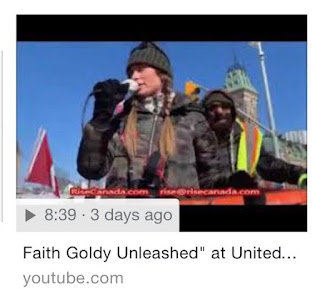 The weekend before on March 17, Boswick and Storie were decked out in their yellow safety vest and protesting on an overpass somewhere near Toronto. Evidently, the police may have been involved: 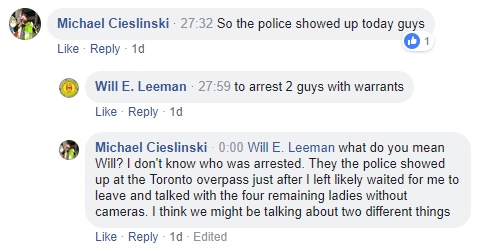 This protest took place only days after the murder of 50 Muslims in Christchurch by a man who was violently opposed to immigration and who viewed Donald Trump as a symbol of white resurgence, if not necessarily a great leader. In the video that Boswick posted, he speaks about the victims of the tragedy.

Oh, not the people murdered.

No, the "real" victims are the "patriots": 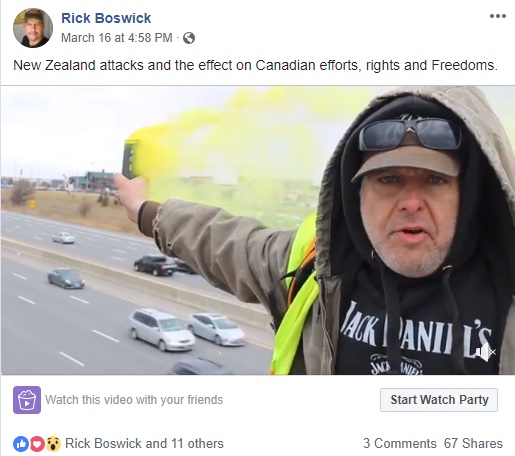 Watching the video, one almost has the impression that Boswick believes the murder of 50 human beings was a plot specifically designed to thwart his own personal efforts to hold an event.

Honestly, that really isn't far off from the truth. Besides whining about how unfair the criticism that will be leveled at their tone deaf behaviour is in the aftermath of a tragedy, Boswick, Storie, and another float the idea that the Christchurch mosque murders never actually happened, a position those viewing the video certainly hold:

Within a very short period of time after the murders in Christchurch took place, I noticed a number of reactions from the groups and individuals monitored by ARC. There were those who celebrated and/or justified the murders. Others claimed to condemn the murders.... BUT then went on to justify them and suggest they wouldn't have happened if only "those people" had stayed in "their own country." Then there were those who latched onto any perceived inconsistency, almost always imagined, in the event in order to claim it as a "false flag" with the purpose of stifling their freedom and taking their weapons. In fact it now joins an increasingly long list of events that the far-right claim didn't happen:

None of this should be any surprise to those who have been following this movement. In fact one might regard it as means to save face. The groups we cover have a vested interest in claiming that the left are the only ones who behave in a violent manner and that the right are perpetually victimized. When called out for their social media posts encouraging extrajudicial killings, assassinations, assaults, and arson, they explain away their violent rhetoric as "blowing off steam" which isn't intended to be taken seriously.... when they are caught in the act. Either that or the violent posts are REALLY the acts of left wing trolls trying to make the "patriots" look bad even when the posters are well known names and leaders in their movement.

When someone on the far right who has been radicalized by this online echo chamber does act out in a destructive manner, this is also easy to explain away. The person committing the act was REALLY a leftist and the "fake news" is trying to tar the good, god-fearing, "patriots". More often than not though, the go-to argument has been that the act was a "false flag" committed by dark forces within the government influenced by "globalists" which is often another way of saying "Jew" or "Zionist." Again, the far right is the real victim. This victim hood is further reinforced by conspiracy sites -- Rebel Media, Brietbart, InfoWars, etc -- that serve to confirm their worst fears despite the evidence that proves the contrary.

When these people say that those who support their extremist views have never committed an act of violence even when presented with numerous instances where this has happened, a lot have either convinced themselves of this truth or they genuinely believe it.

In the days after the Christchurch mosque murders, a number of groups and individuals posted their belief that the tragedy was a false flag aimed specifically to victimize them.

Those include the Canadian Combat Coalition.... 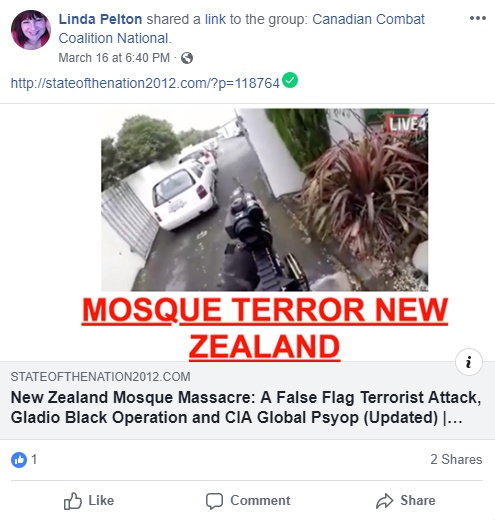 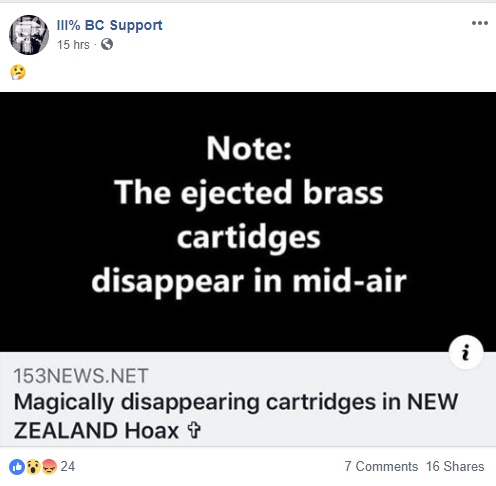 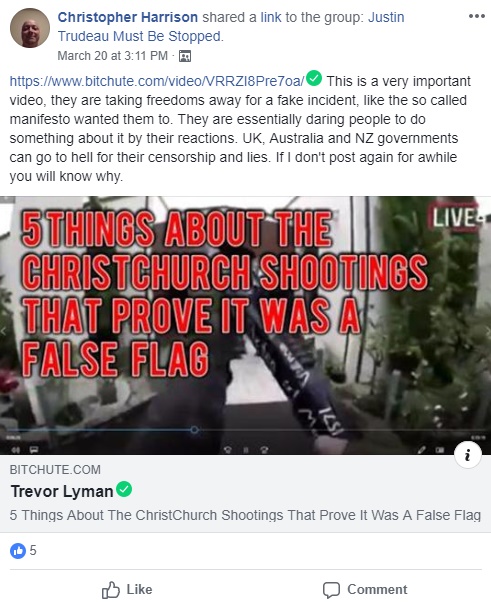 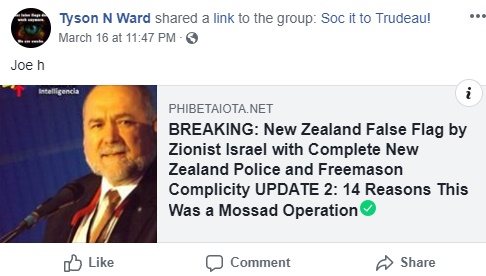 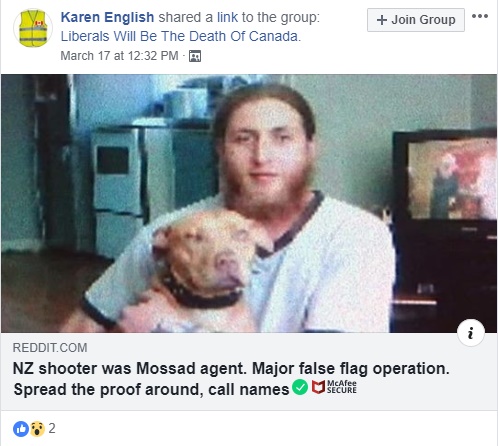 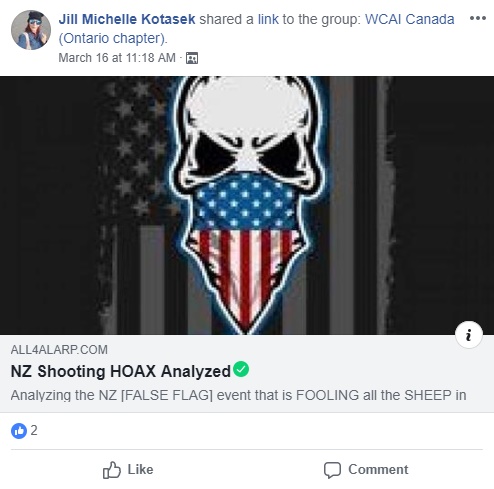 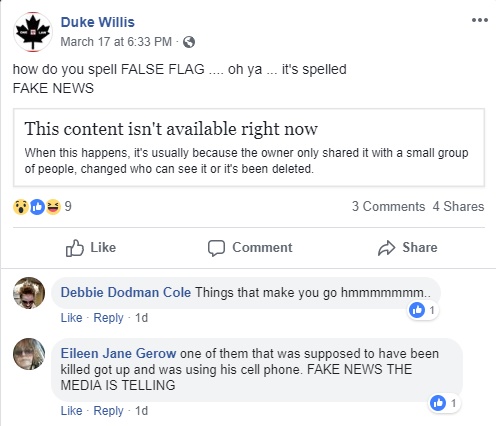 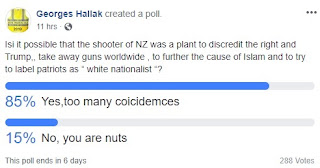 .... and Win Nay who was formerly the Alberta leader of the CCC but seems to have moved onto another group: 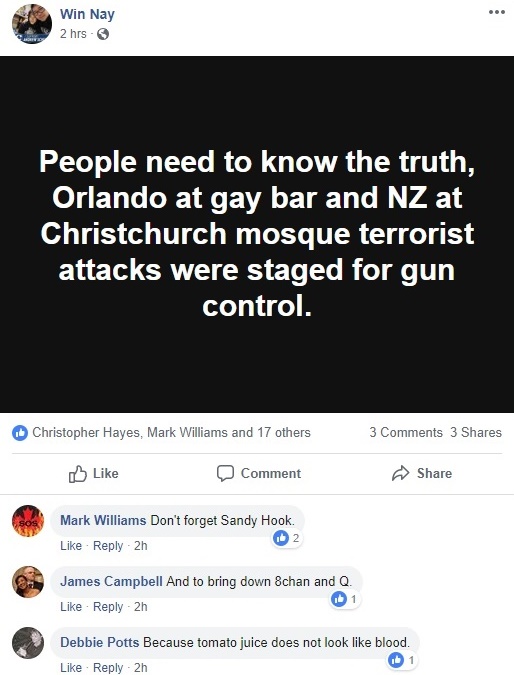 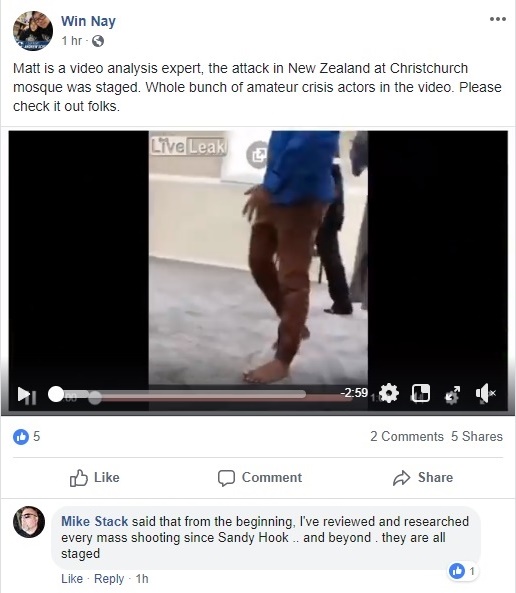 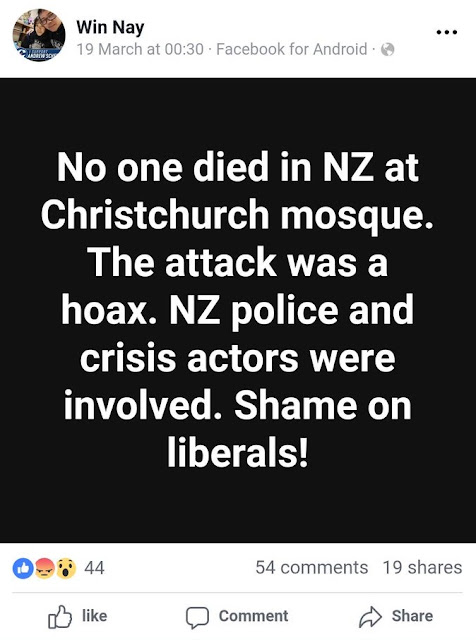 Perhaps ironically, while denying that the act took place, he seems to be promoting the concept of a violent insurrection: 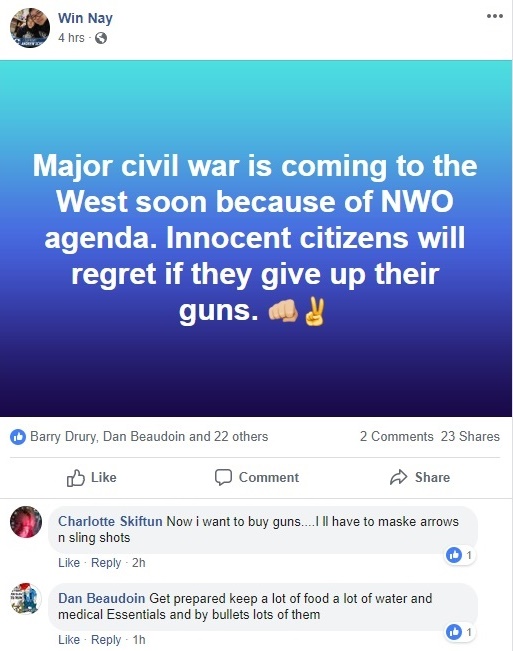 One group that has been promoting the false flag narrative quite heavily is the Clann/Canadian Infidels (whose Facebook group was taken down) out of the Edmonton area in Alberta. Here are a few such instances: 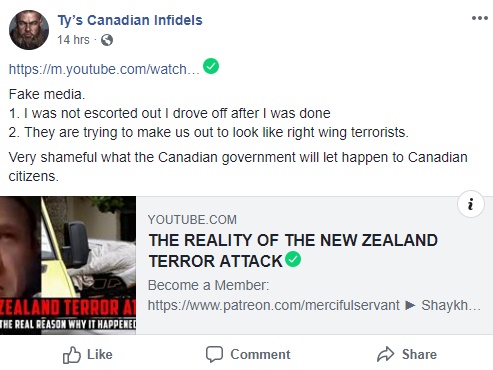 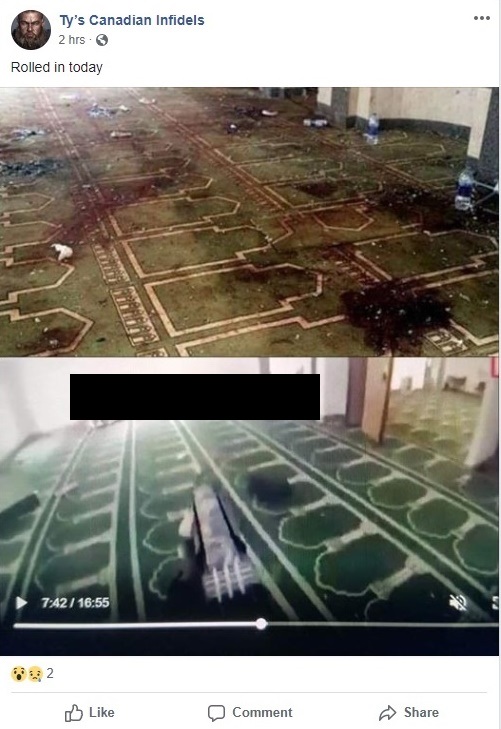 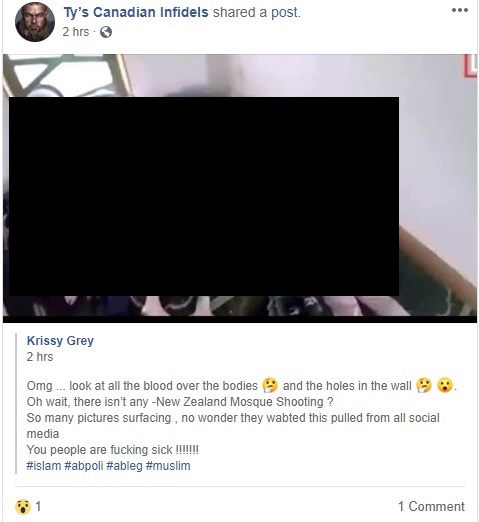 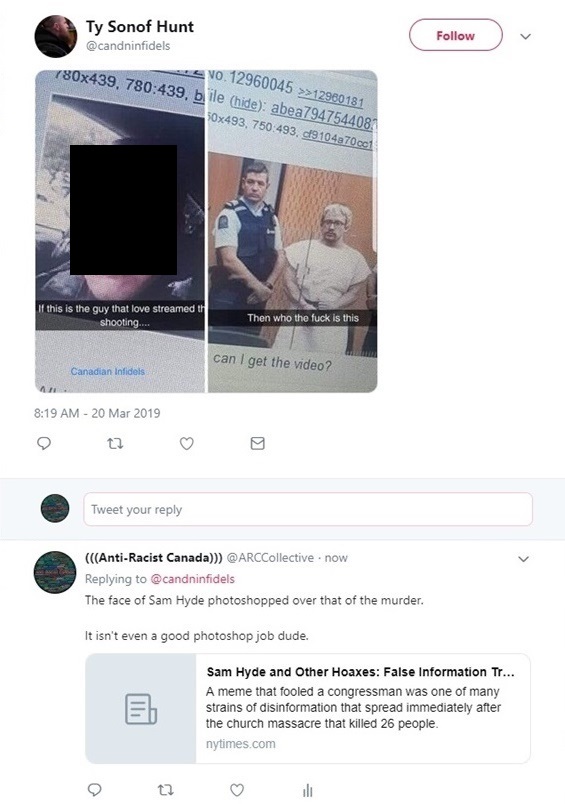 The last post indicates how little research they are willing to do when their preconceived biases seem to be confirmed. And Tyson Hunt certainly has his biases: 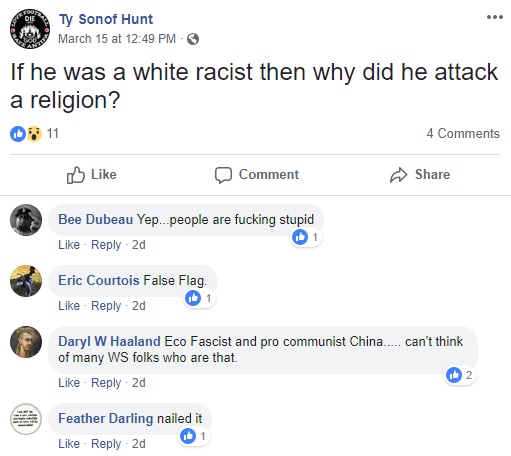 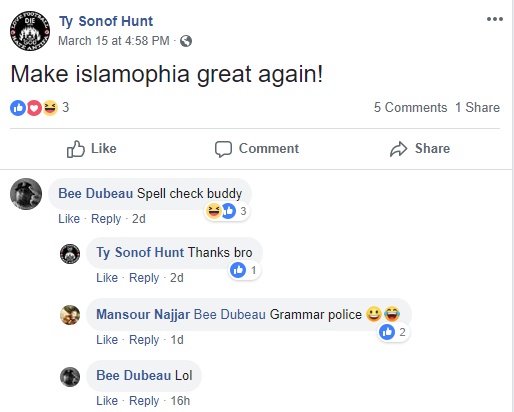 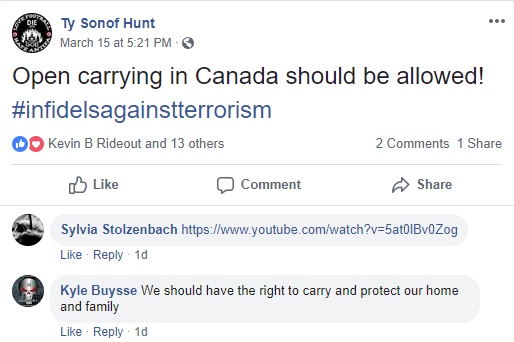 There are far more examples than these that I could post, but I think the point has been made.

It's funny how they call the New Zealand massacre a Gladio plot. All of these groups would have been perfect recruits for Gladio operations just as their fascists cousins in Europe and Latin America were. Indeed, if there is any "conspiracy theory" to be entertained, it is that they are allowed to carry on as they do because government entities deem them as useful.

The deflections and conspiracy theories are disgusting. Can you imagine how the victims' loved one's would feel reading them? Imgine how members of the Muslim community, or any targeted group, live with the knowlege that these folks are running around free.

When will these groups be classified as terrorist organizations? Why should Canadaians have to live with the anxiety and apprehension of having these people active in their communities?