Goldy Goes To CPAC.... And Is Very Disappointed

As I've been battling the worst man cold in the history of man colds (really, it actually might be the most virulent cold since history began and that is TOTALLY not an exaggeration), I've been sticking close to home medicating myself with port and Netflix documentaries; cold medication might be more efficacious but not as much fun. However I decided to pull myself from the sofa, wrap a knitted afghan around myself, and head into the office to make a rare foray into American politics.

This weekend the Conservative Political Action Conference, or CPAC, is being held in Maryland just a bit downriver from Washington D.C. CPAC has, in addition to attracting a who's who of whom might be regarded as mainstream conservative politicians and activists, has increasingly attracted those from the fringes of the movement including ethnic nationalists, identitarians, and alt-righters in addition to regular bunch of conspiracy nutbars and general grifters. 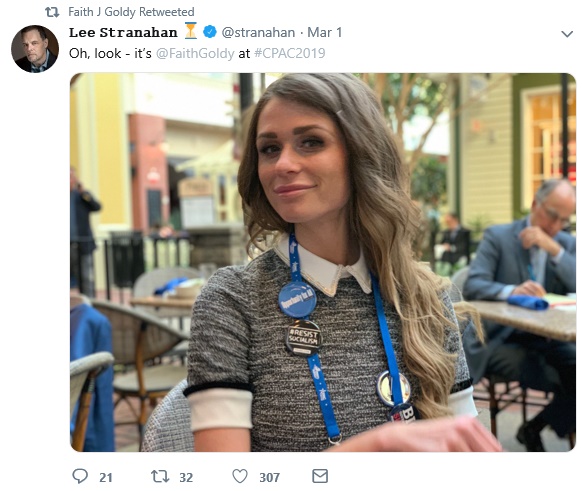 It really is amazing how these folks are drawn to each other. Here Goldy is with fellow CPAC attendee Jacob Wohl (no doubt at some hipster coffee shop), freshly banned from Twitter because he's blisteringly stupid. Wohl, a Trump sycophant who makes R.M. Renfield appear dignified by comparison, is known for among other things being banned from trading in futures for life as a result of massive fraud and attempting (badly) to frame Robert Mueller for sexual assault. He is at CPAC promoting yet another conspiracy theory concerning Rep. Ilhan Omar along with fellow grifter Laura Loomer: 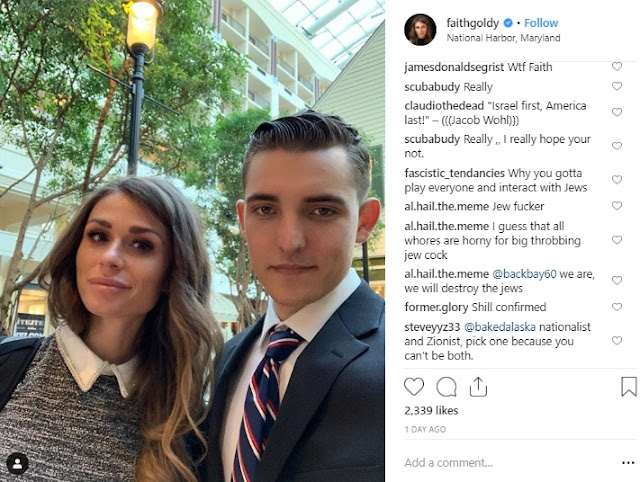 Ostensibly Goldy is attending CPAC as a "journalist" working for the anti-immigration, white nationalist org VDare, however as readers know she is also very much a partisan:

However it seems that things at CPAC aren't going quite as well as Goldy would like. In fact I can't help thinking about this scene in "The Simpsons" when reading her Twitter feed: 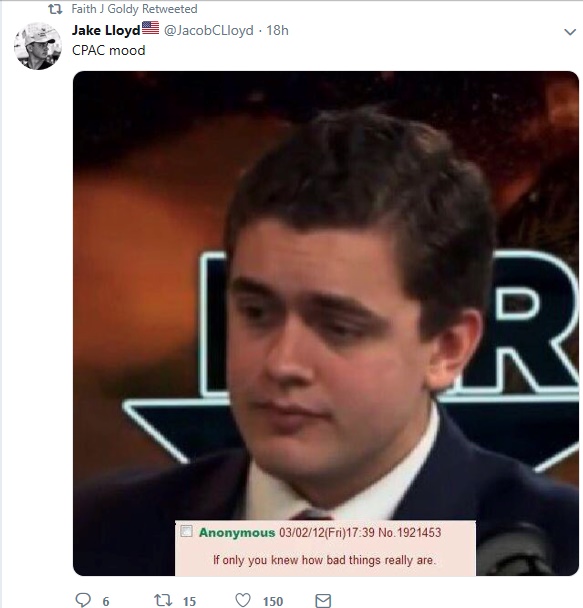 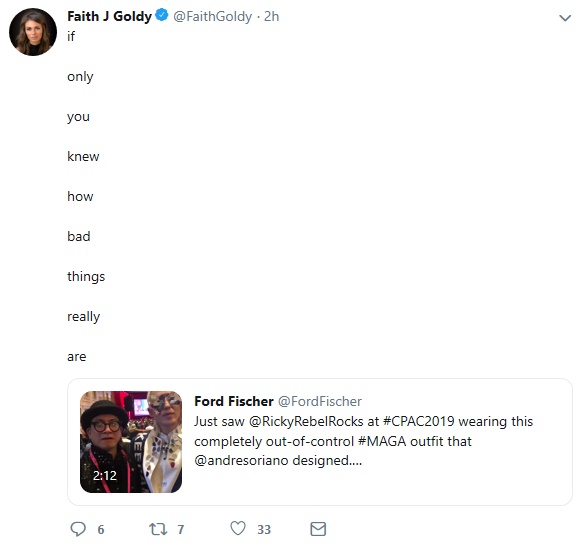 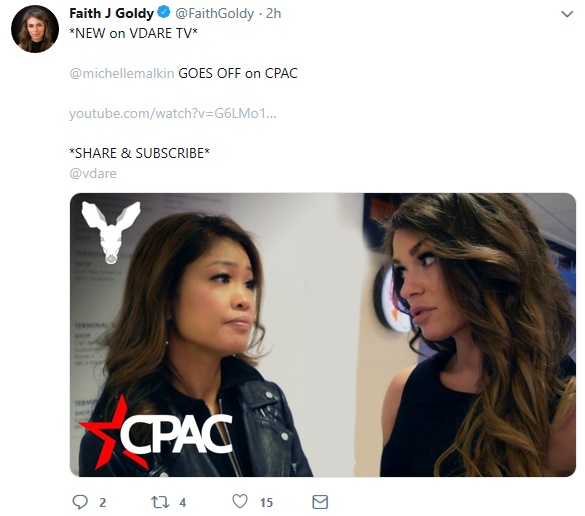 It appears that CPAC, while still super racists, isn't quite racist enough: 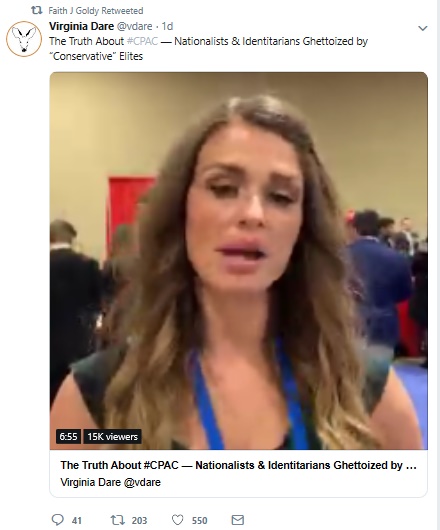 Goldy runs through a number of complaints about her time at CPAC, though those complaints really do come down mainly to her not thinking the organizers are anti-immigration enough. Her tweets retweets tell the story of increasing frustration about how there wasn't enough focus on her pet issue: 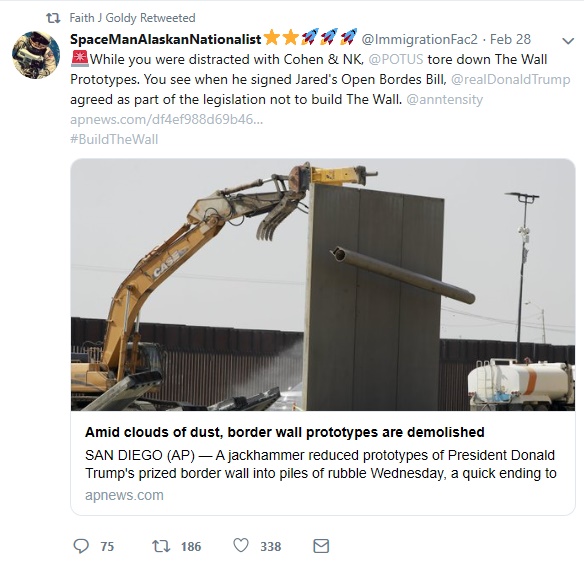 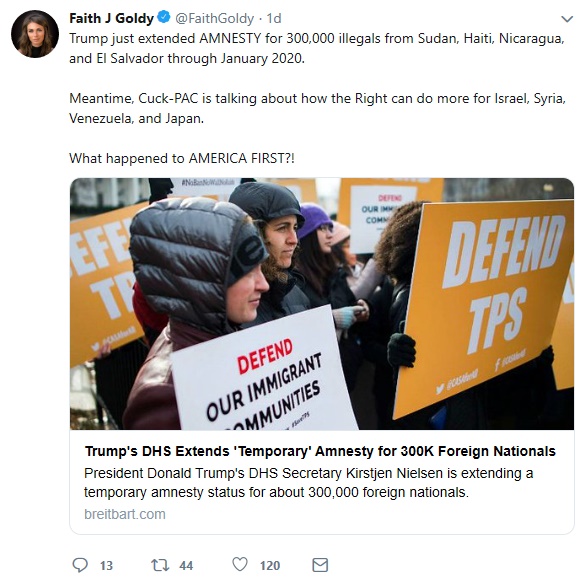 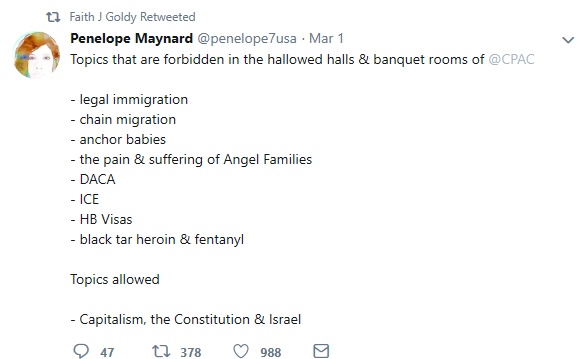 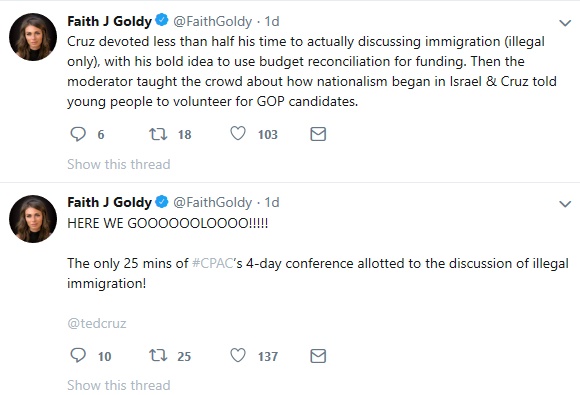 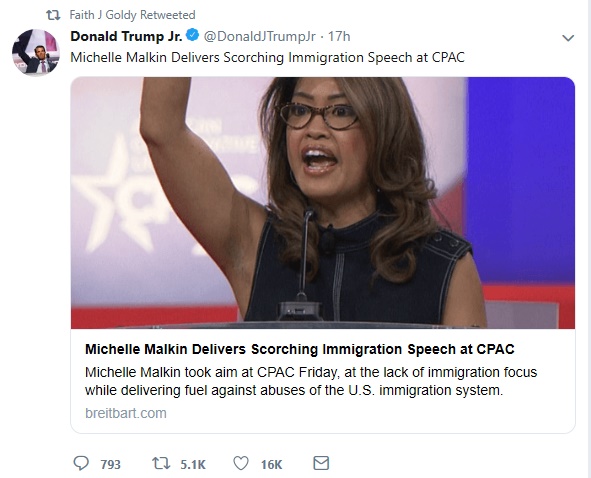 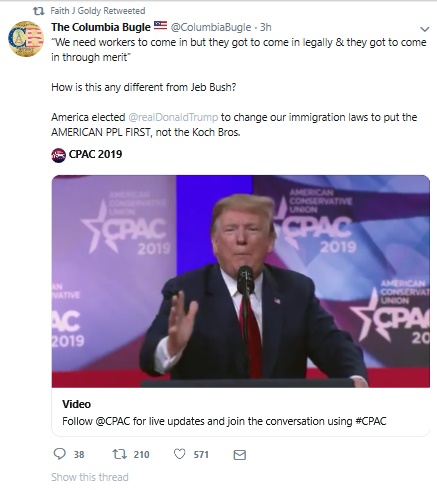 She was especially upset about this statement made during a panel discussion:

She was backed up by.... checking my notes..... noted white supremacist Congressman Steve King who also backed Goldy in her failed mayoral campaign: However she is also upset that her fellow travelers are being either denied press credentials or are being excluded from the event altogether, including a leading member of Identity Evropa: 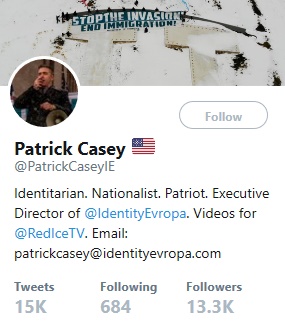 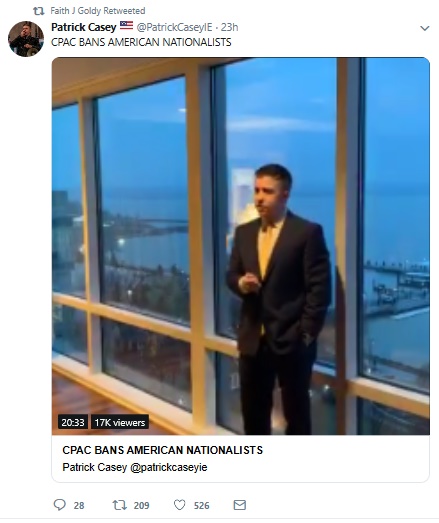 Oh, and don't get her started on the way that the "nationalist press" is being treated: 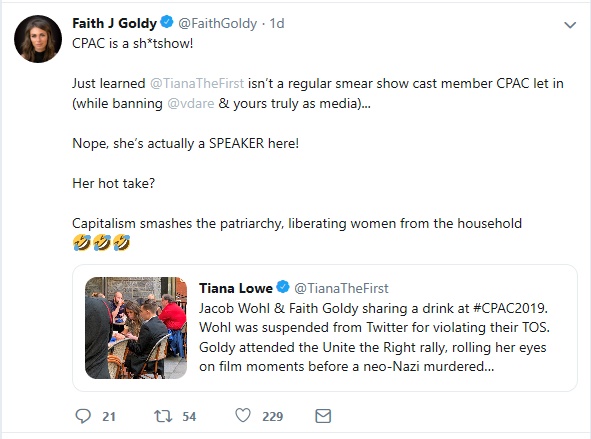 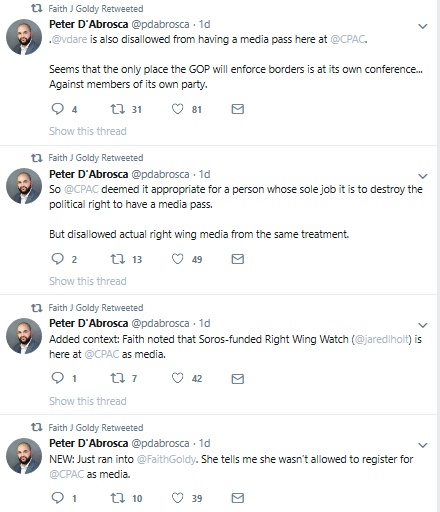 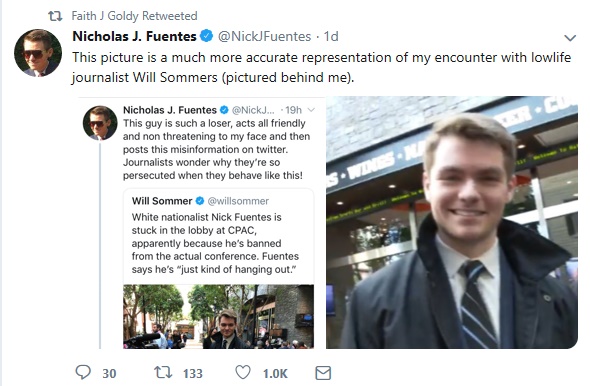 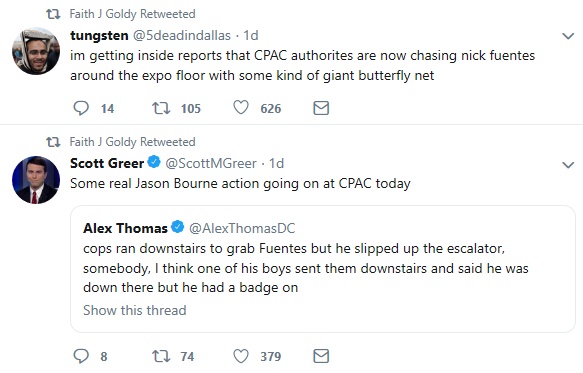 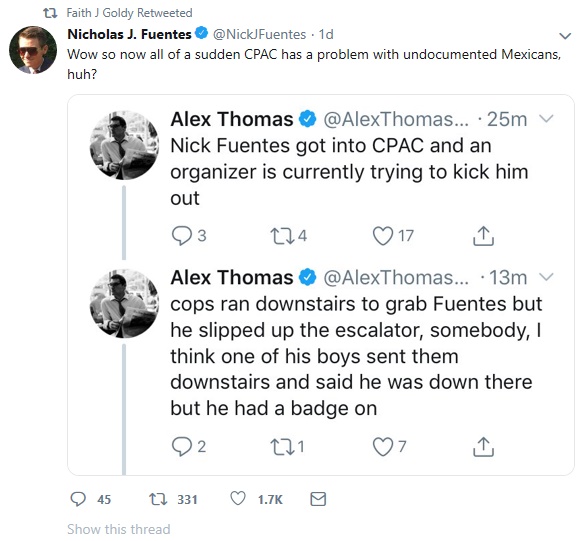 And lately it wouldn't be any sort of event without Laura Loomer being banned: 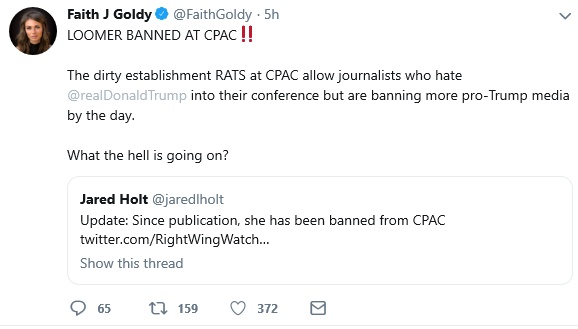 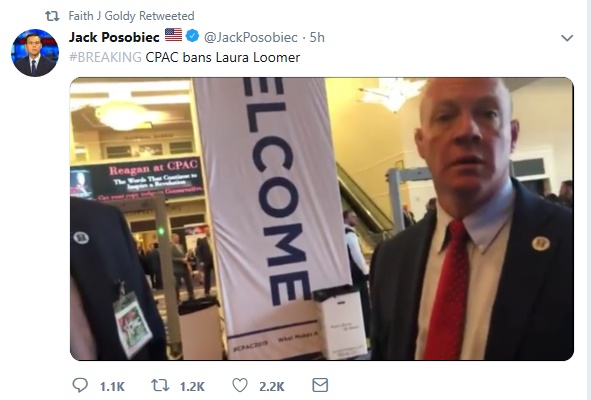 Goldy suggests she knows the cause of all of this: 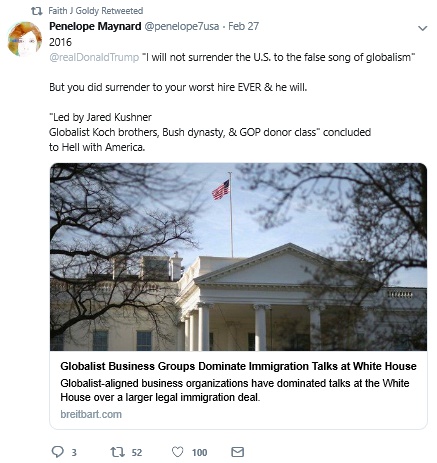 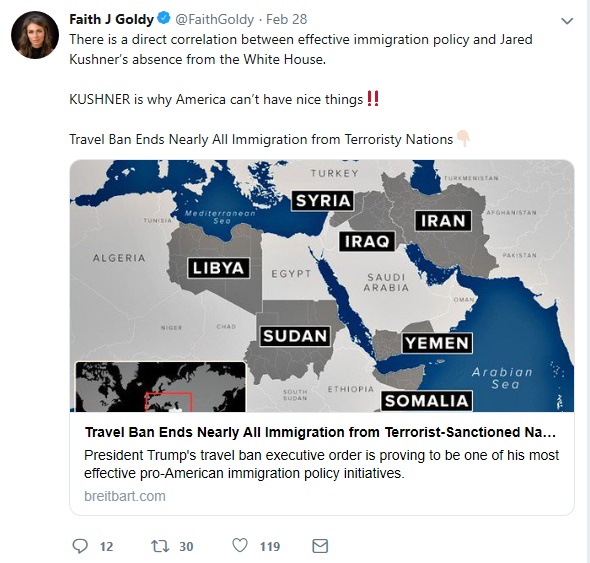 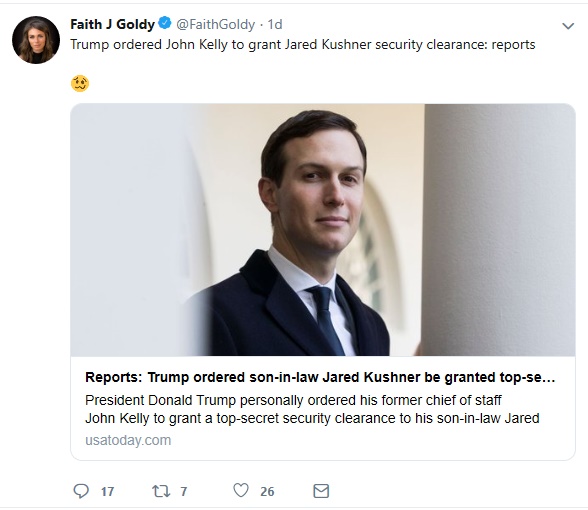 Considering they are both seen as being on opposite sides of the ideological spectrum, I wonder what the two have in common?