Guest Article: Faith Goldy -- Anti-Semite or Pro-Israel? Why not both?

By now it seems hard to deny that Faith Goldy is an anti-Semite:


However, some of the more dense among us have yet to catch on. They think her (ostensibly) being pro-Israel nullifies all of this. 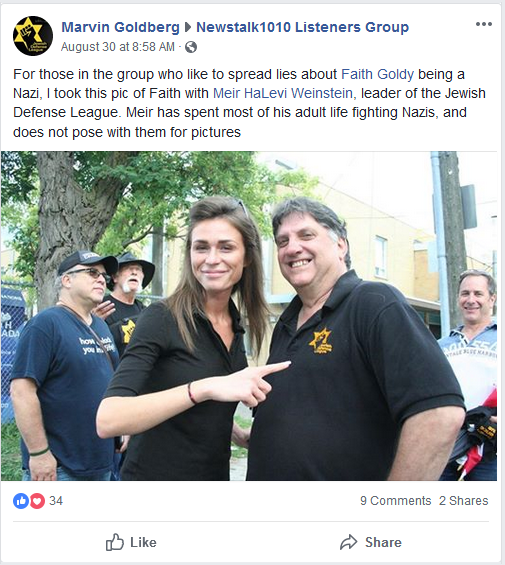 Meir Weinstein is hardly a model of opposing Nazis given that he has repeatedly demonstrated having blind spots to right-wing anti-Semitism (Soldiers of Odin, Ronny Cameron, WCAI, etc.). But it is by no means just the JDL who is falling for this dumb argument. This brings up the question: what actually are Faith Goldy's views on Israel?

Long-time observers of nationalist, xenophobic movements in the West will know that there are a few positions these groups and figures can have on Israel. There is the traditional anti-Semitic one, which sees Israel as the world headquarters of the international Jewish conspiracy and as being parasitic on the white man. There is also the anti-Muslim "counter-jihad" one which sees Israel as the first line of defence against Islamic expansionism, often tempered with Christian Zionist or neoconservative themes. Lastly, there are positions that fall somewhere between, such as the alt-right figures who see Israel as a model ethno-state but take an isolationist position on Middle-Eastern affairs, perhaps while still pushing anti-Semitic conspiracy theories about Israel (such as that Israel supports ISIS against Bashir al-Assad).

So where does Faith Goldy stand? While it may seem long ago with all the hateful things she's said, she hates Palestinians and has called for a "crusade" against them. She has also advocated for a "one state solution" which presumably doesn't mean one state with equal rights for Arabs and Jews and right of return for Palestinians, like some pro-Palestine people support. No, she means Israel should annex the West Bank and expel all the Palestinians, (I believe that's what she would call "ethnocide") or at least have them under permanent Israeli occupation. She often touts this fact to try to dodge accusations of anti-Semitism. She can’t be an anti-Semite if she hates Arabs!

As abhorrent as all of this may be, none of this would be anything too outstanding among anti-Muslim circles, which typically reactively sides against the “Muslim” side in any conflict and will justify any actions taken against them. But as Faith started to become more open about her alt-right associations, her views on Israel started to take a slightly different tune. She started praising its ethnic demographic policy, portraying it as a model for the West, describing it as a “religious ethnostate” (her words, not ours):

“Open borders for Israel” is an alt-right meme. The neo-Nazi Daily Stormer appears to have been an early promoter of this phrase.

Later that April, Donald Trump fired some more missiles at Syrian government targets to respond to a chemical gas attack. Naturally, the pro-Assad alt-right jumped to Assad's defence and blamed an Israeli conspiracy to drag America into war. Faith was among them: 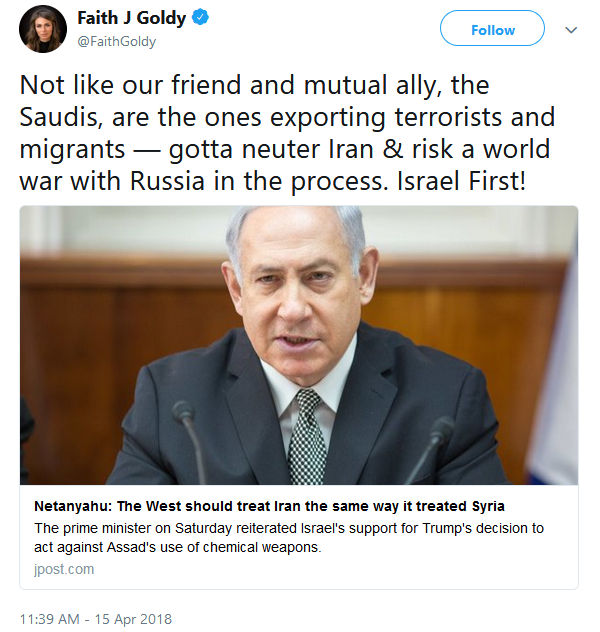 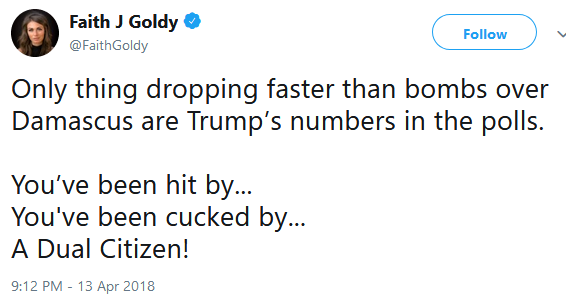 If there's any doubt, let's just search to see where this parody of Michael Jackson's "Smooth Criminal" comes from: 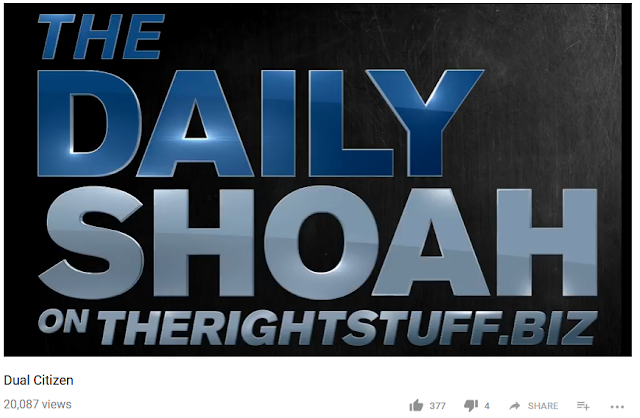 That’s right, it's from "the Daily Shoah" podcast. And while this obscure reference may have went over the heads of some of her conservative fans, clearly some of her Twitter followers got where it was coming from. Note the many reference to the podcast hosts, Mike Enoch and Sven (AKA Seventh Son): 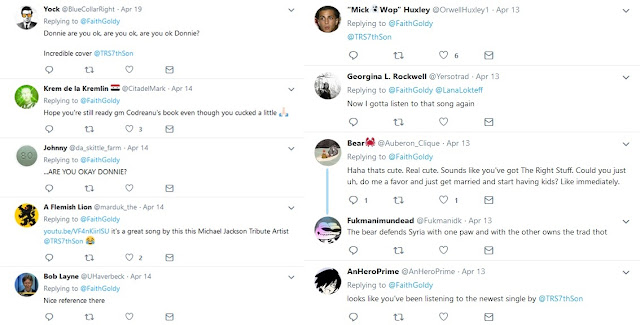 This is not the only time in that month alone that Faith Goldy used subtle anti-Semitic dog whistles to signal her support for the alt-right. One time she made a negative reference to a "culture of critique.” 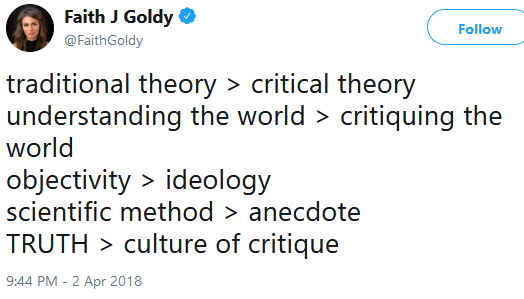 Culture of Critique is the name of an anti-Semitic book by Kevin B. Macdonald, which tries to use evolutionary psychology to argue that "Jewish intellectual movements" in the 20th century were bent on subverting the cohesive social structures of WASP-dominated America. The author has worked for various white nationalist publications, and is very influential in alt-right circles. Evolutionary psychologists often ignored this work, dismissing it as pseudo-scientific. But over the past year it has come under more serious intellectual scrutiny in response to its role in popularizing the contemporary rise in anti-Semitism.

Again, her anti-Semitic fans heard what she meant loud and clear. 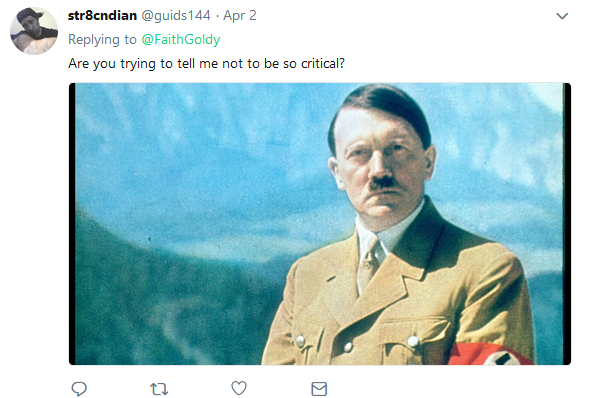 While writing this, Alheli Picazo in Canadaland notes that Faith Goldy had previously mentioned Kevin Macdonald as being important in her shift towards alt-right “ethno-nationalism.” So she’s definitely aware of his work.

Back to Israel and Syria. Back in this same month, Goldy also took umbrage over Israel’s airstrikes against a Syrian airbase. 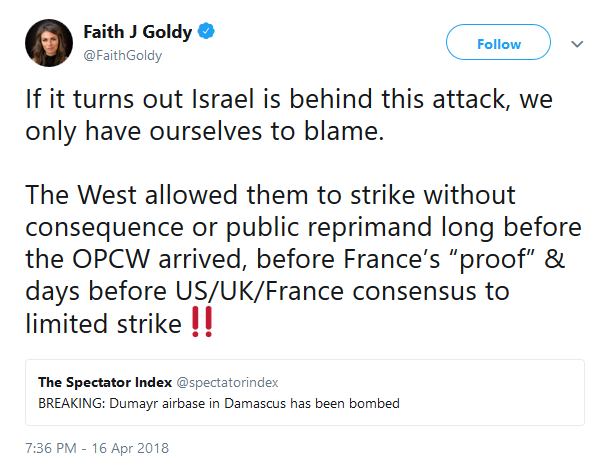 She also opposed the Trump Administration’s attempt to rip up the Iranian nuclear deal: 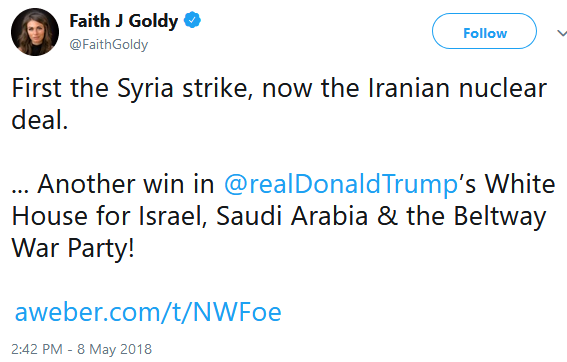 While this in itself is not controversial, it is remarkable that the JDL, which picketed liberal politicians for supporting the nuclear deal, seems to take no issue with their right-wing anti-Semitic friends supporting it.

So, we see that Faith Goldy supports Israel’s demographic policies excluding Arabs and African refugees as a model for the West. She considers this to be an ethno-state, something she says she wants for Canada. At the same time however, she opposes Israel’s foreign policy and sees it as being in conflict with Canada and America. She also blames aspects of America’s foreign policy that she opposes on Jewish control.

In other words, she is an anti-Semite who "supports" Israel.
Posted by Nosferatu200 at 23:50

Goldy is a piece of shit, no matter which side she's on.Flash some cleavage and you'll have every Moshe and Dolf licking her boots. Tired of seeing her botox'd face.