Meet Tyson Hunt, formerly leader of the Edmonton chapter of the Soldiers of Odin:

Hunt had some pretty lofty goals for the SoO in Edmonton after he became leader as evidenced by the post from his own Facebook profile, even if he also managed to mangle the language: 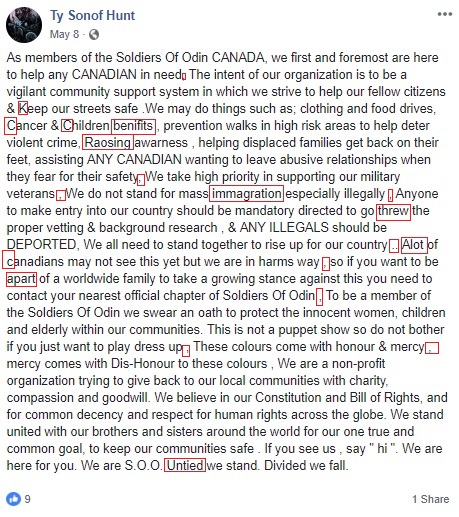 I can't be too critical as I've been known to make some pretty careless spelling, punctuation, and grammatical errors myself. What I CAN be critical of though is despite the claims that the SoO wasn't a racist organization, the Hunt as leader really had no problem posting some pretty racist comments and allowing others to do the same:

Aside from an article detailing a rather clumsy (and ultimately failed) public relations attempt early in September, I haven't written much about the group despite it becoming more active. I chalk that up to being spread a little thin these days. That changed though when Progress Alberta published a story detailing a United Conservative Party event featuring three candidates which was attended by members of the Edmonton chapter of the SoO. Two of the three members disavowed the SoO and what they stood for claiming that they were unaware of who they were. The UCP claimed that the SoO had crashed the event in order to make them look bad despite claims by SoO members and supporters that the UCP were aware that they would be attending. The attempt at crafting a coherent message took a hit though when the third candidate, Lance Coulter, admitted that he knew who the SoO were, they didn't appear racist to him (that's sort of a paraphrase on my part), and that he was giving them the benefit of the doubt despite the SoO's long and documented connection to white supremacism and the fact the Finnish founder was an overt neo-Nazi. Coulter was subsequently removed as a candidate by the UCP which claimed they were unhappy he had expressed a "sympathetic assessment" of the SoO, though those more cynical amongst us might offer as an alternative reason that he had embarrassed the party by contradicting their earlier claim that they had no idea who the SoO were which isn't exactly without some admittedly biased evidence: 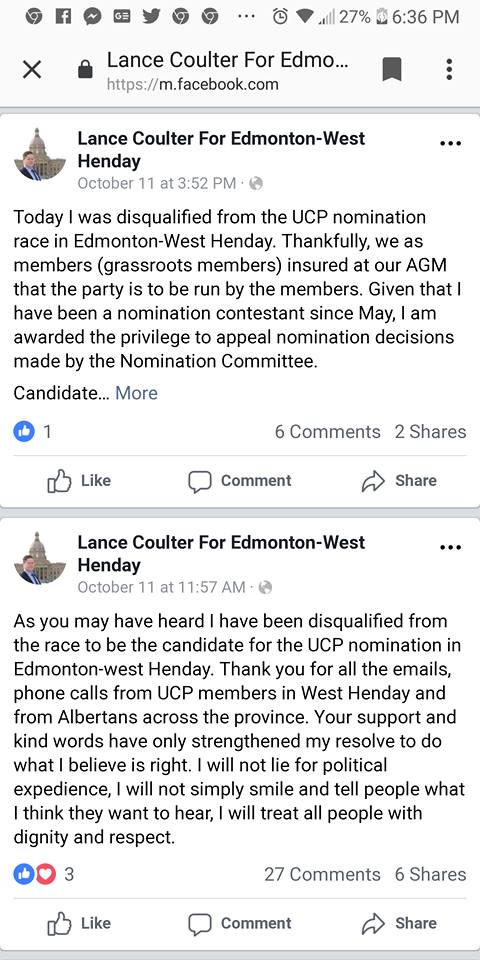 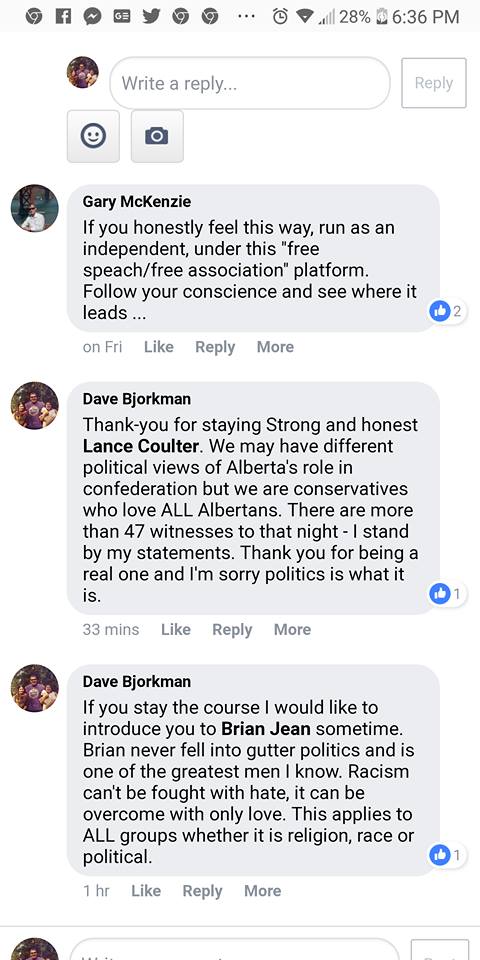 The Edmonton chapter of the Soldiers of Odin continued to act defiantly in the face of increased scrutiny posting this message only days ago: 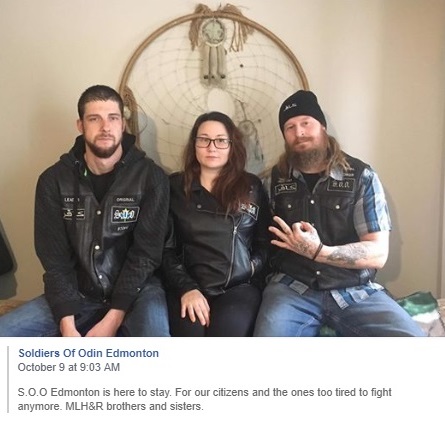 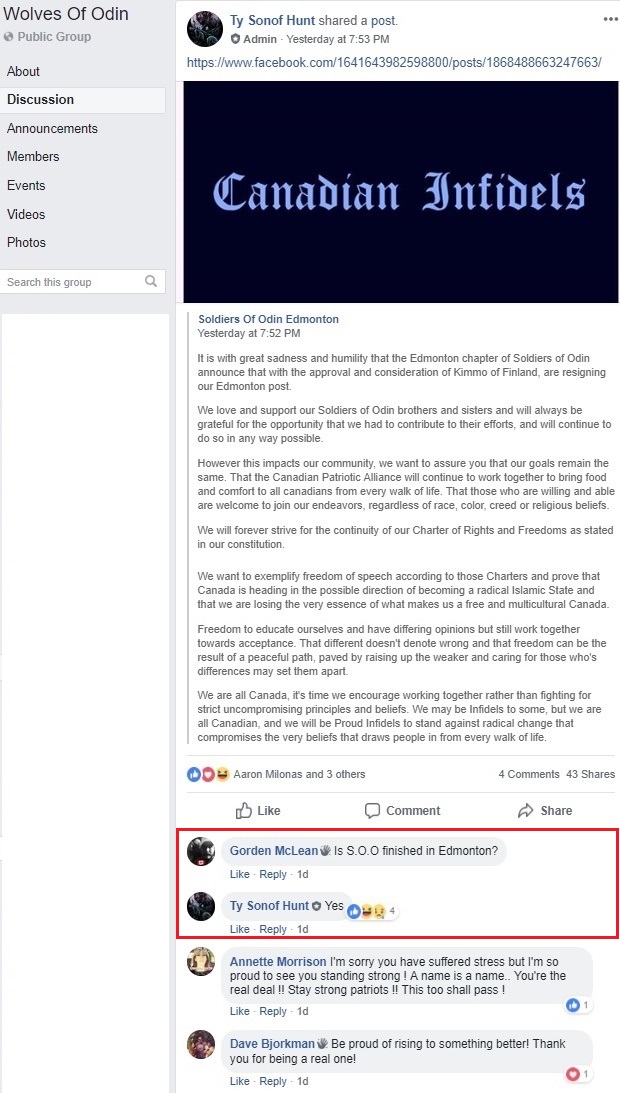 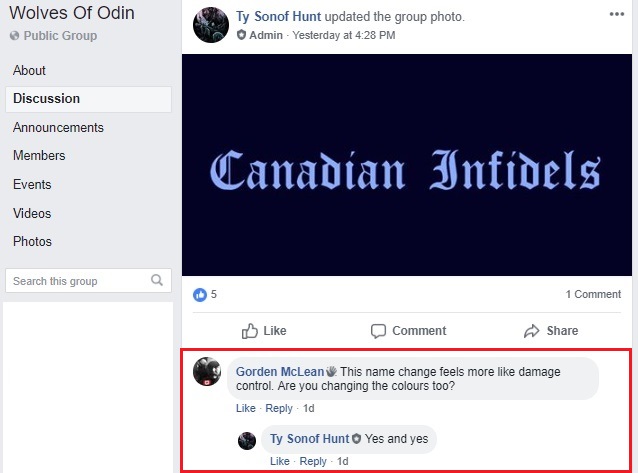 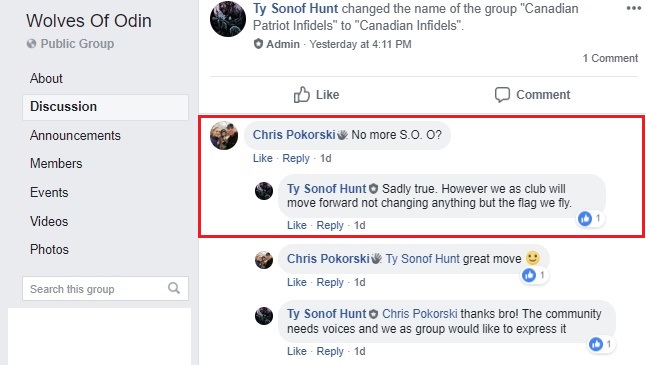 Vice appears to have broken the story, or at least was one of the early media outlets that published the demise and/or re-branding of the Edmonton Soldiers of Odin which is now, and I kid you not, going by the name Canadian Infidels:

Two years ago I joined the Edmonton chapter of the Soldiers of Odin in an attempt to learn more about the group. Today that chapter was forced to disband by the other Canadian leaders after too much negative media attention.


I think the only name that could possibly top the Canadian Combat Coalition for sheer ridiculousness might just be Canadian Infidels.

As it turns out and in part as a result of demands from other Canadian SoO chapter leaders the Finnish parent club kicked the Edmonton chapter out for being too political and garnering too much negative attention in the media:

The exchange between Hunt and the Finnish leaders is as follows: 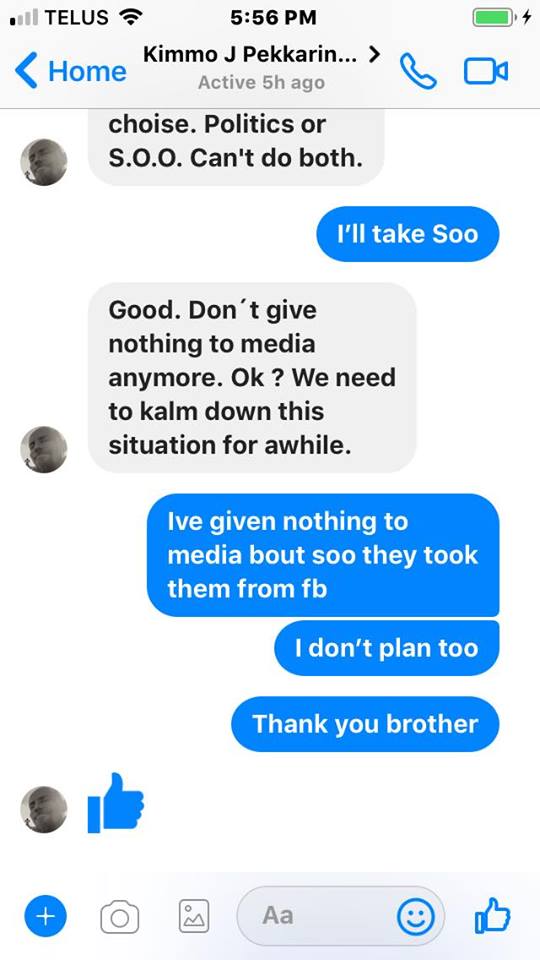 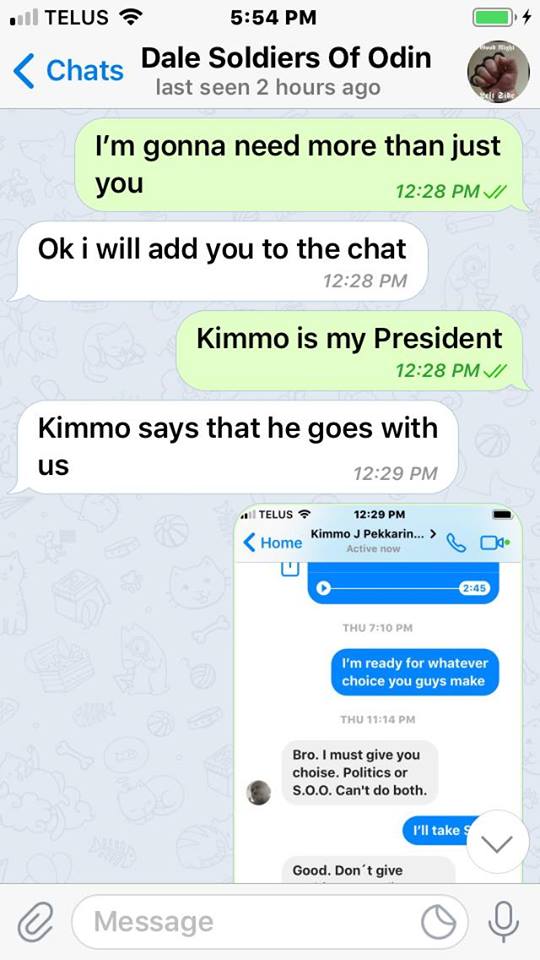 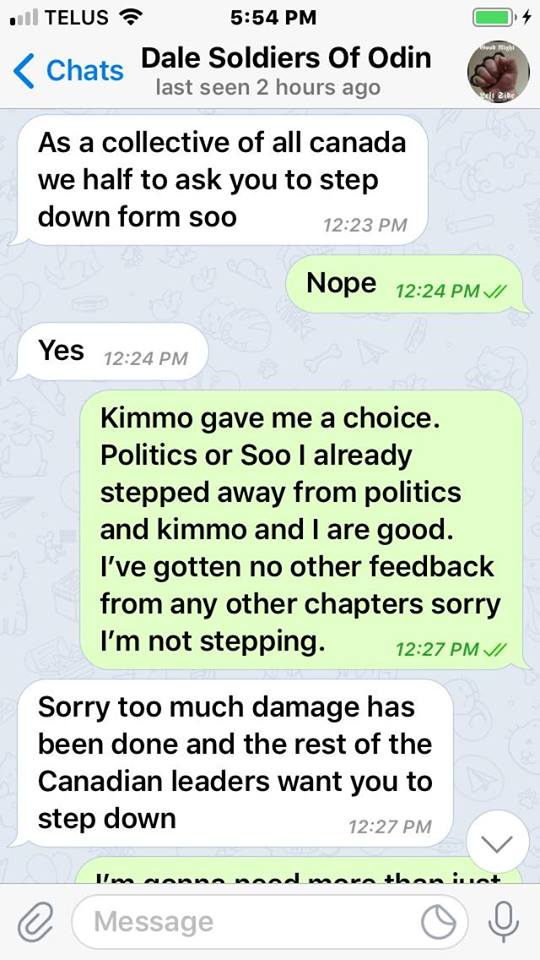 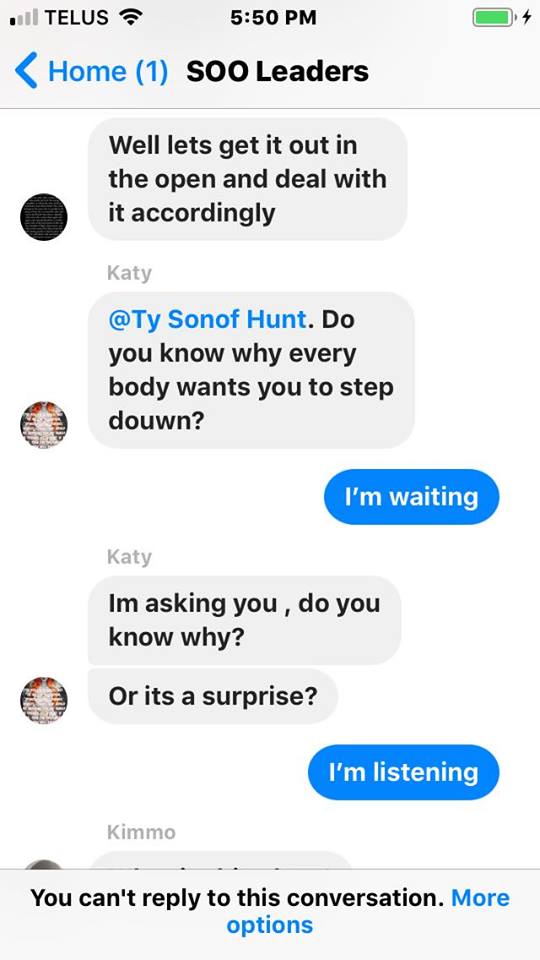 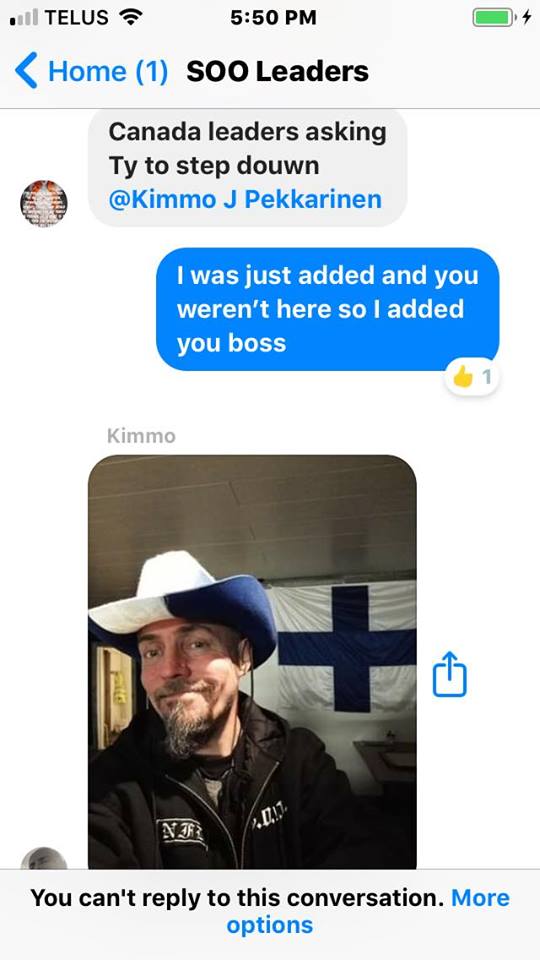 I find this to be rather interesting. While the Edmonton chapter of the SoO had stated they were not a racist organization they clearly had ties to the Finnish parent club which was founded by a neo-Nazi and was clearly a racist group. Other Canadian chapters, such as the Vancouver Island Soldiers of Odin, claimed to be independent of Finland and I believe the Edmonton chapter may also have made the same claim for itself. Either way, it looks like the Finnish parent chapter still has a lot of influence in Canada in spite of claims made by Canadian members.

And if they are trying to make themselves appear as more moderate, the newly named Canadian Infidels have failed rather epically: 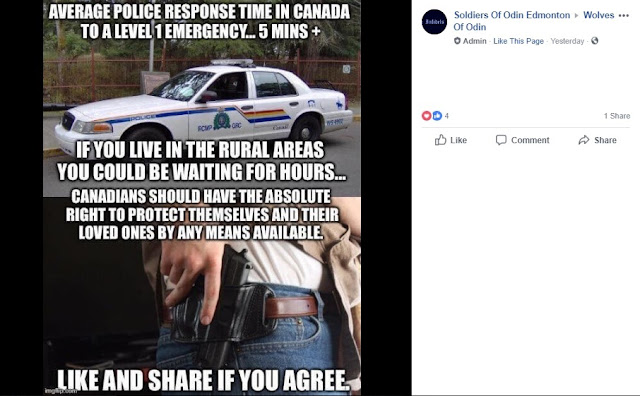 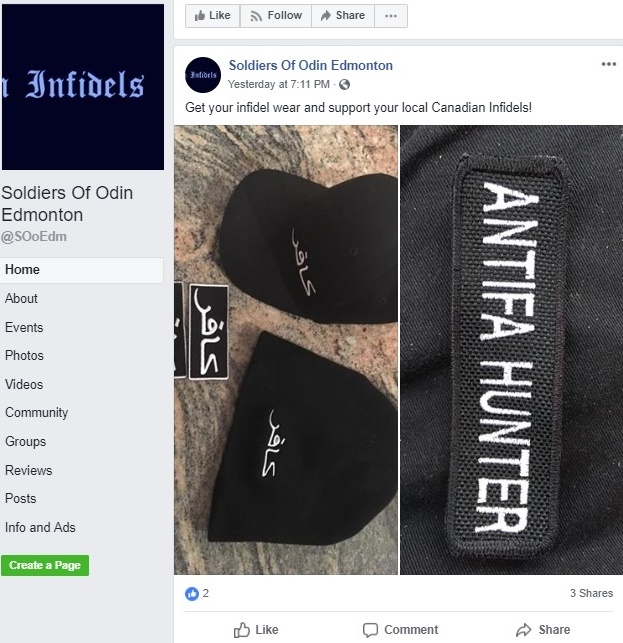 In an "Edmonton Journal" article discussing the end of the SoO Edmonton chapter, Hunt stated the following in an interview conducted yesterday morning:


In an interview Monday, Hunt said that despite sharing a name with the European group, the Edmonton Soldiers of Odin are not xenophobic.

The "Journal" noted however:


However, the group publicized a Sept. 11 rally at the Commonwealth Community Recreation Centre via a Facebook event page titled “Infidels against Islam.” The event was widely criticized by anti-hate groups and community leaders.

The interview appears to have taken place prior to the rebranding.

Subsequent social media posts in their open Facebook group really does call into question their claim to not being anti-Muslim or "anti anything": 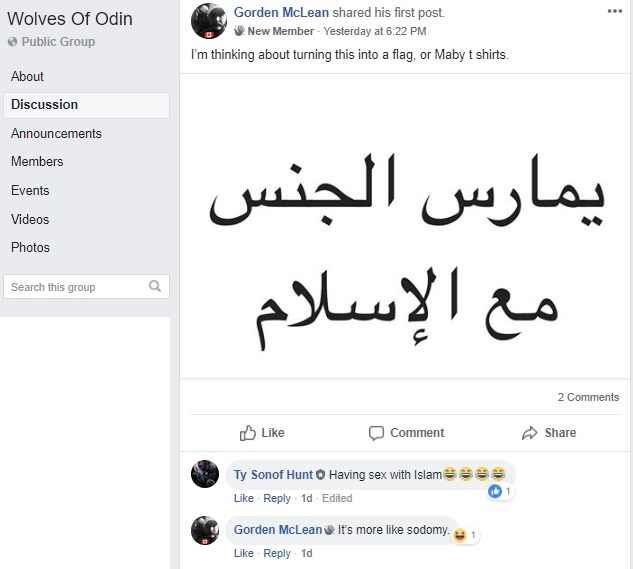 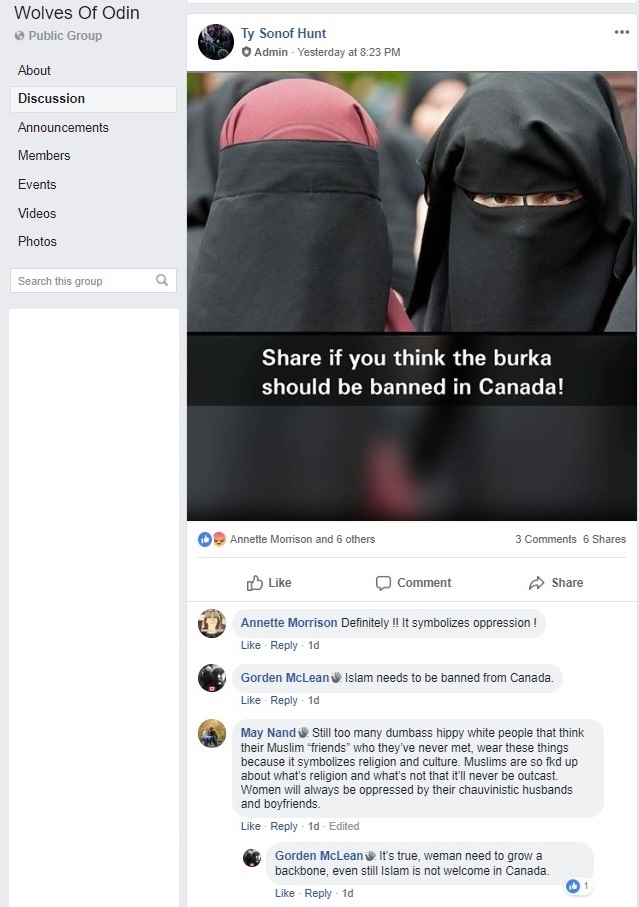 It is almost as if they don't think people will actually research what they say about themselves.
Posted by Nosferatu200 at 21:09