A Yellow Vester, a Hatriot, and a Neo-Nazi Walk Into a Bar...

...Not really, but they did go live on Facebook.

Shortly after Your Ward News editor James Sears was sentenced to one year in prison for his role in distributing the virulently antisemitic, misogynistic, and homophobic hate rag, Derek Storie of the Yellow Vests and Ed Jamnisek of Northern Guard thought interviewing neo-nazi Paul Fromm would be a good use of their time.

On Aug 22, after Sears was sentenced to a year in prison for distribution of the virulent "Your Ward News," which glorified Hitler & spread antisemitic, misogynistic, & homophobic propaganda, Derek Storie & Ed Jamnisek (Northern Guard) interviewed none other than Paul Fromm. /1 pic.twitter.com/Hgu2cyD2UA
— Yellow Vests Canada Exposed 🏴 (@VestsCanada) August 24, 2019

Nice of Ed to brush his hair for the occasion.

The three chatted about all sorts of "patriotic" things, like how you can't be antisemitic anymore:

Fromm's opinion that Maxime Bernier's Peoples' Party of Canada will get rid of hate speech laws:

Given Fromm's support for the PPC platform, the fact he thinks this will actually happen isn't surprising.

Fromm even went as far as to use standard white nationalist talking points, reiterated by Jamnisek who complains "if you're questioning who rules you, who can you not criticize?"

Also of interest here is Storie including himself when referencing their belief that "white people are outnumbered," given that he repeatedly claims to be indigenous, stated he was Metis earlier in the video, and insists that his vlogging under the name "Noble Savages" is a reference to his heritage.

Anyway, they continue on with Ed asking if civil war is imminent. Fromm is careful with what he says, but does express a lot of support for the Yellow Vests: 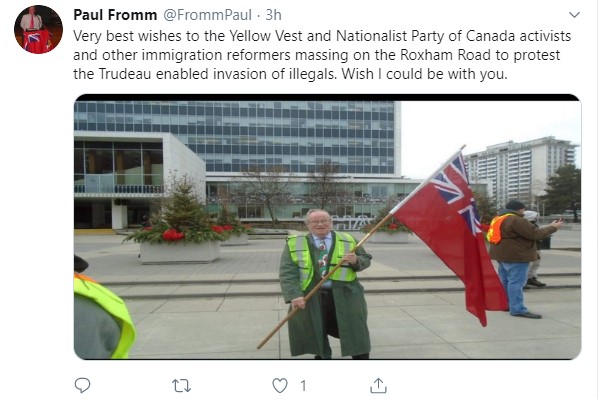 
That said, he certainly has participated in Yellow Vest rallies before, but has reportedly been asked to stop coming around, since we covered it.

Fromm insists "we are at war," and is confident that such "free speech advocates" as himself would be thrown into a gulag or camp. We can think of a few places Fromm can go, but it's neither of those. We'll leave such monstrous ideas to those who pal around with Blood and Honour, Combat 18, and the Aryan Guard.

Derek Storie is still somehow not aware of Paul Fromm's affiliations, or the affiliations of those he spends time with, such as the Canadian Nationalist Party: 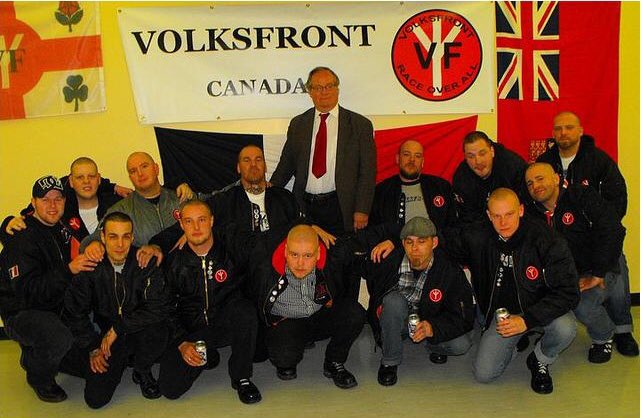 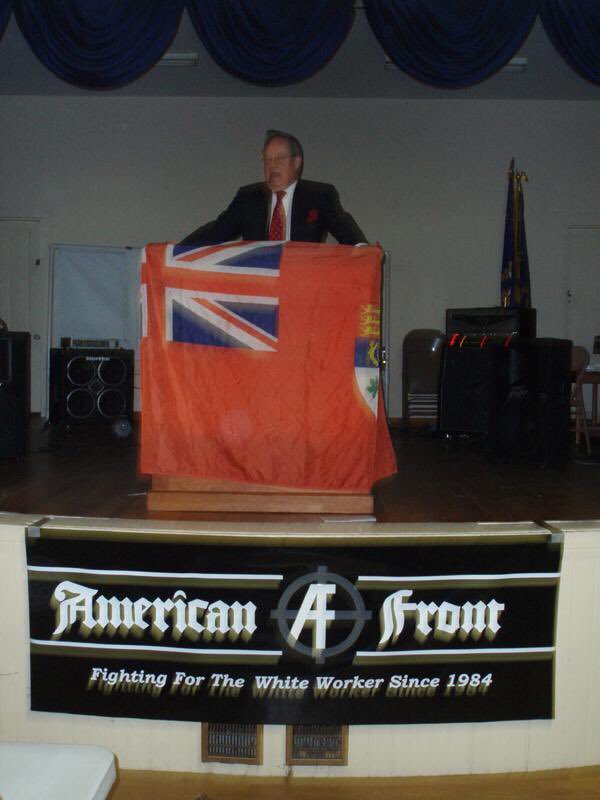 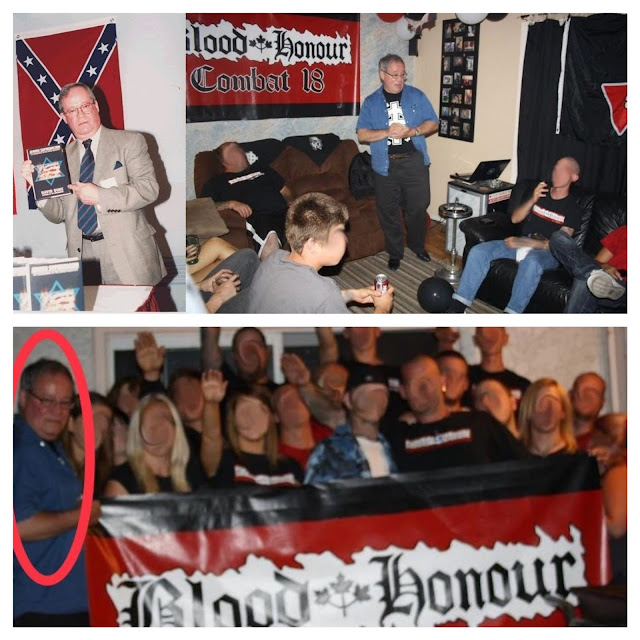 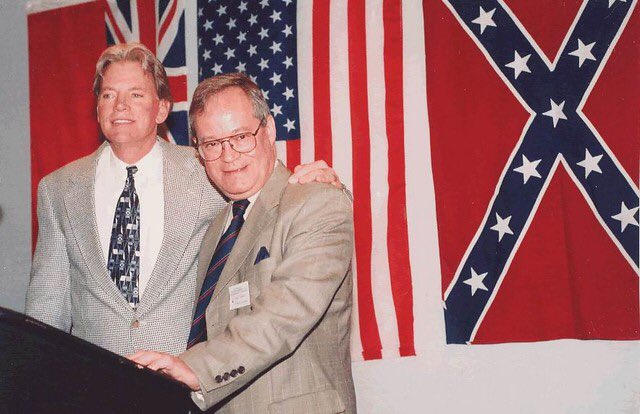 Who's going to tell Derek?


Ed provides an extremely watered down primer on who Paul Fromm is, including the indication that he's somehow NOT a holocaust denier:

I suppose we can't blame Ed, given Paulie's very convincing attempts to portray himself as a run-of-the-mill free speech dude. 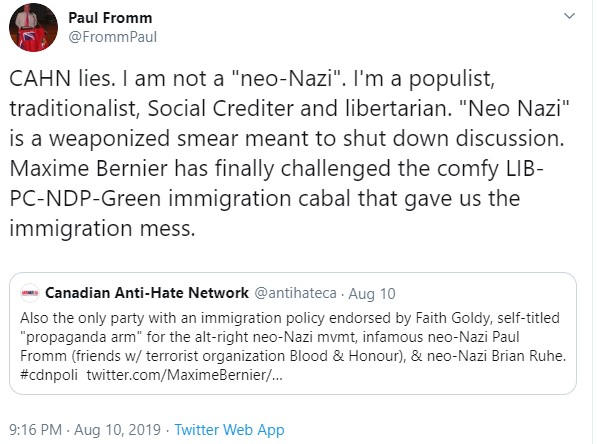 I can't imagine where we'd get that idea. 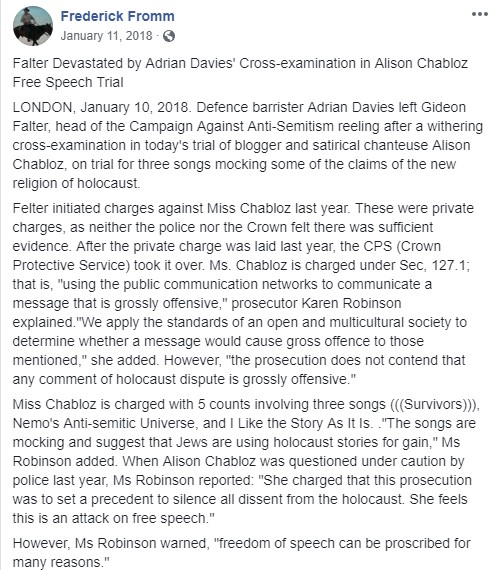 We leave you with not a nazi or a holocaust denier (heh) but definitely a very large baby Paul Fromm's thoughts on the sentence: 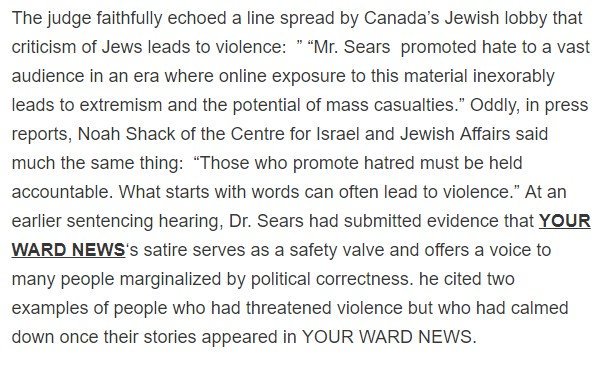 From a piece I wrote in 2010 complaining about Global TV News providing a platform for hate:

Spokesperson for the Canada First Immigration Reform Committee was Paul Fromm, an inveterate committee-former who wants non-white and third-world immigration stopped. No mention was made of Fromm’s past associations or that this sad collection of protesting relics numbered precisely seven.

We can assume that the pretty faces reporting for Global TV don’t know that Paul Fromm’s involvement with the radical racist right dates back over 40 years and includes contacts with the most reprehensible bigots exposed in Canada. Fromm has been kicked out of legitimate political movements for his agenda, the last time by Preston Manning.